Available for auction is this 1957 Austin-Healey 100-6 BN4 finished in two-tone Healey Blue and white over a tan Conolly leather interior. The successor to the Austin-Healey 100, the 100-6 was in production from 1956-1959 and brought with it a slightly longer wheelbase, 2+2 seating, and a more powerful inline six-cylinder engine. The 100-6 BN4s produced for 1956 and 57 were among the last models manufactured at Austin-Healey’s Longbridge England factory, and just over 7k of these first series BN4s are believed to have been produced. This example was originally delivered to Rabat, Morocco, and was imported to the U.S. sometime before being acquired by its second owner in 1977. The second owner is said to have been a New York Times columnist and member of the Austin-Healey Owners Club, and to have conducted the last U.S. interview with Donald Healey. It would remain under the care of its second owner until their passing in 2010 when the car was acquired by its third and current owner who commissioned a complete body-off restoration which was completed in 2013. It is now being offered for auction by its seller out of New Jersey, having covered 237 miles since the completion of its restoration. 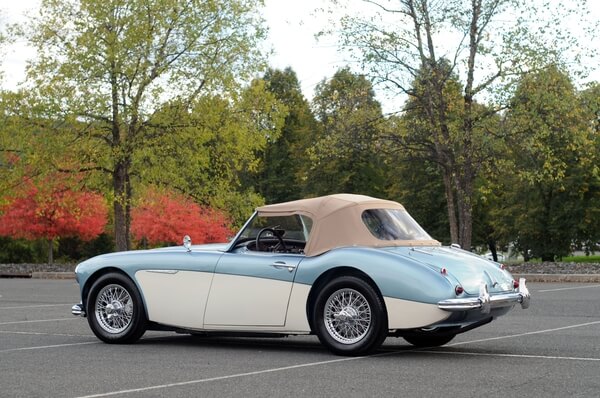 Compared with the Austin-Healey 100 the 100-6 features streamlined bodywork, a fixed windshield, a smaller grill, and a hood scoop. This example comes finished in Healey Blue with white side scallops and a tan canvas soft top with a plastic rear window. During its restoration, the frame was sanded and reinforced, and the body was refinished and treated to new wooden braces and floors, body molding, a convertible top, and refurbished chrome brightwork. The seller notes that the finish remains in outstanding condition and has provided a collection of detailed images including photos documenting the restoration process. Details include a laminated windscreen, windscreen washers, chrome bumpers with overriders, fender-mounted mirrors, twin exhaust outlets, and a polished fuel filler cap. It rides on a set of chrome-finished 15” wire wheels with knock-off spinners and Firestone F-650 tires. 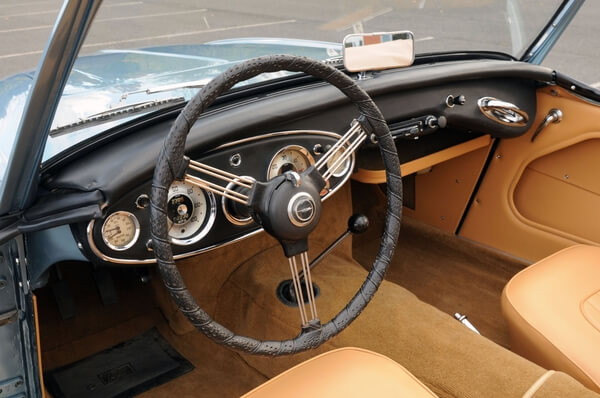 Inside the 2+2 cabin, the seating surfaces have been reupholstered in tan Conolly leather with matching door panels. The dashboard is wrapped in black leather, the floors are lined with tan carpeting, and the original Smiths instrumentation has been professionally disassembled and repaired. Features include a heater, a three-spoke banjo-style steering wheel, a polished grab handle, and a dashboard-mounted rearview mirror. The seller confirms that all gauges and accessories remain functional. 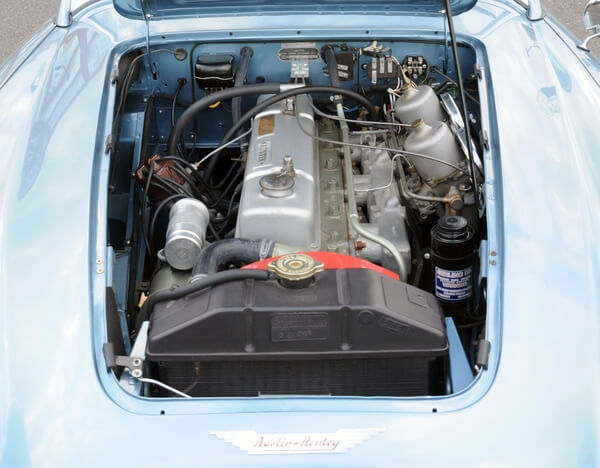 Power comes from a C-series 2,639 cc inline six-cylinder engine fitted with dual SU carburetors. The rear wheels are driven by way of a 4-speed manual transmission with electronic overdrive. The seller notes that the engine is not number matching and that this has been the case since it was acquired by its second owner in 1977. During the restoration, the engine was rebuilt to factory specification, with all parts being either refurbished or replaced with new old stock units. The transmission was inspected and repairs were made to insure smooth shifting. Extensive service was carried out in 2022 including the installation of a new exhaust system, fuel tank and sending unit, clutch, clutch and brake master cylinders, generator and regulator, the rebuild of the carburetors and overdrive unit, and more. The seller has provided a collection of service records which are available for reference in the gallery. 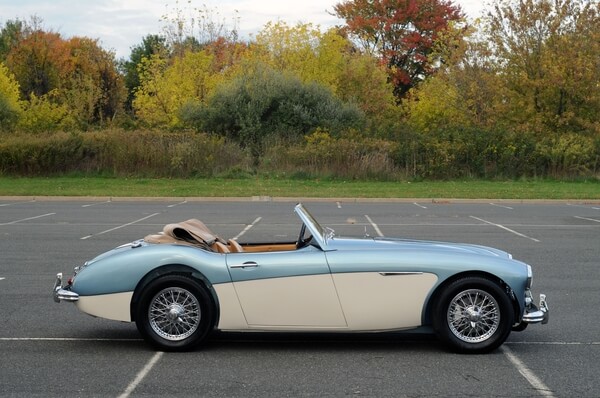 This sale will include service and restoration invoices, a copy of the interview conducted by the second owner with Donald Healey, and a clean title.