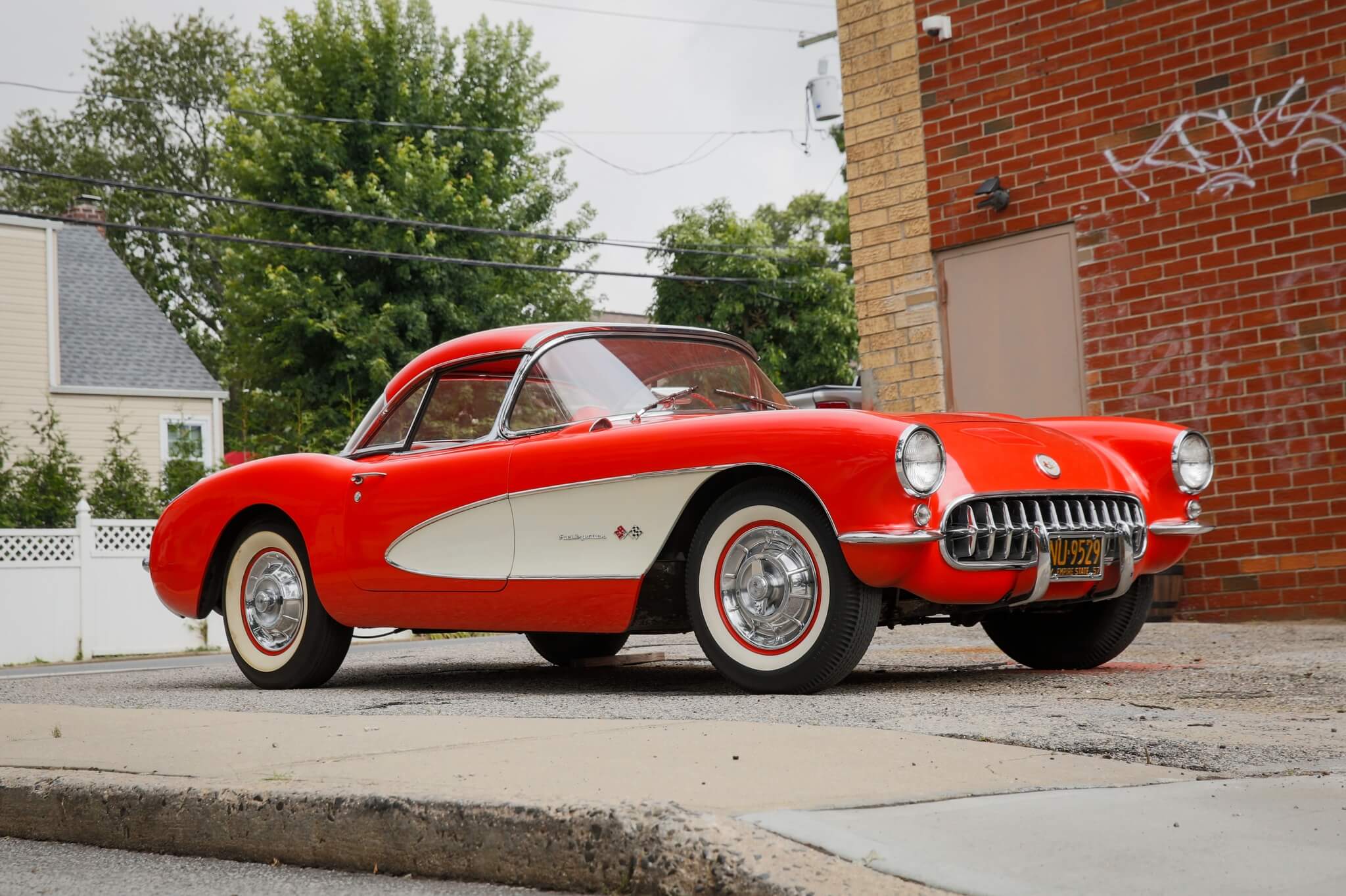 It is our pleasure to offer this highly original 1957 Chevrolet Corvette finished in Venetian Red.  Among the rarest and most highly collectible vintage American sports cars of all time, this C1 Corvette is one of only 713 examples ordered with a 283HP fuel-injected V8 engine for the 1957 model year.  Some of the fastest production cars of the era, many of the ’57 “Fuelies” went on to be used as race cars with notable accolades including a class win at the 12 Hours of Sebring and an SCCA B-Production national championship.  Ordered with an optional power soft top, two-tone paint, and a 3-speed manual gearbox, this C1 Corvette was sold new from Manhattan Chevrolet dealer Don Allen to a United States Merchant Marine.  With the original owner spending most of his time at sea, this Corvette was rarely driven before it was passed to his girlfriend in the early 1960s. Shortly thereafter it was purchased by its next owner in New York who had normally driven the car only once a year to the local Kiwanis Club annual antique car show several blocks from his house.  In 1999, it was acquired by the current owner and kept tucked away as the centerpiece in a world-class American car collection ever since.  Perhaps the most well preserved 1957 Fuelie in existence, this Corvette remains in outstanding original condition and is now being offered for auction by its owner out of New York with just over 20,800 miles showing on the odometer. 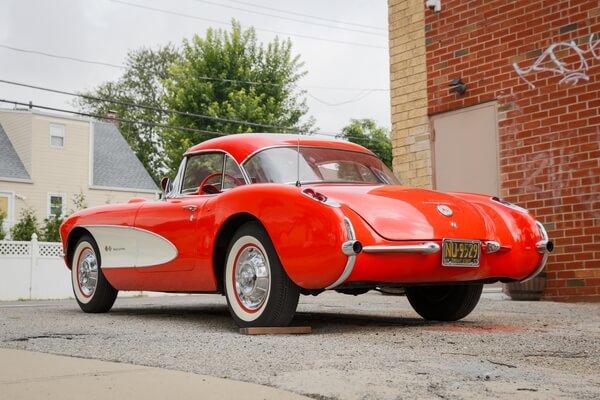 The factory Venetian Red and Ivory two-tone paint has been kept entirely original with beautiful natural patina along with the brightwork, glass, and trim pieces. The painted hardtop has reportedly never been removed and wears its original headliner.  This Corvette is one of only 1,336 cars to have been optioned with a power-operated soft top in 1957 at an additional cost of $139.90.  The complex convertible mechanism on these cars is known to leak, and the fluid that seeped from this example appears to have scarred the paint on the trunk floor, although it did not reach the spare tire.  The factory 15" wheels remain encased in their original “gum dipped” Firestone Deluxe Champion whitewall tires that were mounted when the car rolled off the assembly line in February of 1957.  The original spare tire also remains in the trunk, unused, with ink stampings on the tread and a shipping label reading “CHEV ST. LOUIS, DIV OF GMC, ST. LOUIS, MISSOURI.” 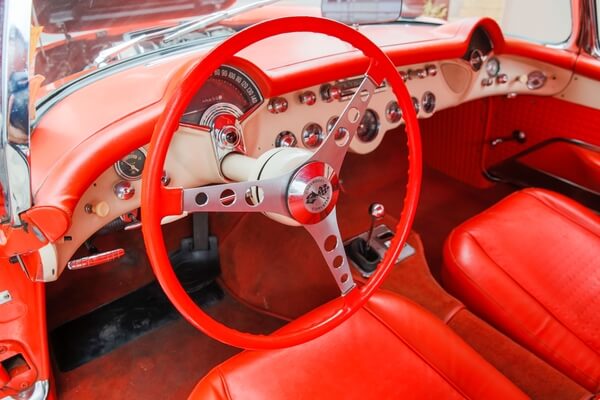 As with the rest of the car, the red vinyl interior remains very well preserved while retaining its original carpeting, upholstery, steering wheel, and door panels.  The only modification to the entire car is the addition of three extra dash gauges for oil temperature, manifold vacuum, and generator voltage.  These gauges were reportedly installed by the original owner and the current caretaker found it appropriate to leave them in place.  The car’s factory options include a power-operated soft top, a removable hardtop, two-tone paint, courtesy lights, whitewall tires, a heater, a parking-brake alarm, and an AM Wonder Bar radio. 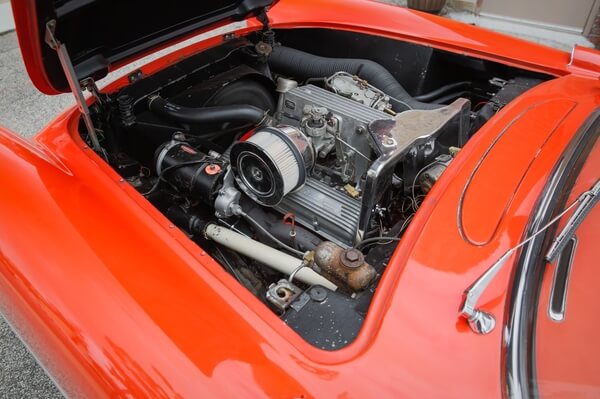 Under the hood lies the original 283ci V8 fuel-injected engine which generates up to 283 HP.  A 3-speed manual transmission sends power to the wheels through a low-gear rear axle.  The option of a 4-speed gearbox only became available in April of 1957, four months after the car was ordered.  Beneath the car, the undercarriage appears unmolested while showing light rust patina as well as factory frame stencil and inspection markings.  The current owner fully appreciates the significance and rarity of this Corvette and has taken the utmost care in preserving it as close to its original condition as possible. 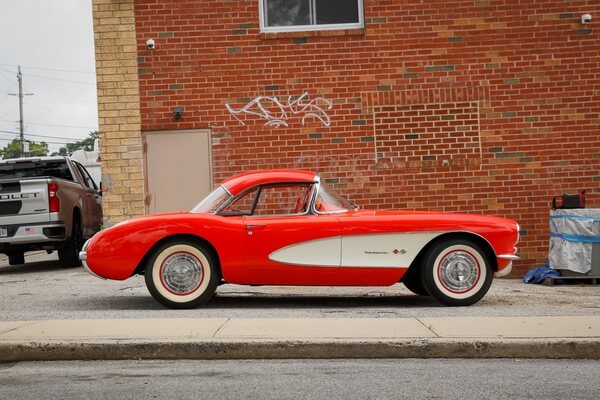 This sale will be accompanied by a transferrable New York registration and a collection of original documentation and literature including the original operations manual, radio instructions, service guide, and General Motors owner service policy. Also included is the certificate and ribbon for the Second Flight Award bestowed by the National Corvette Restorers Society in October of 1999. One of the rarest Corvettes in existence, this 1957 Fuelie, presented in an exceptionally well-preserved state, would make the crown jewel of most any American car collection.  Do not let this incredibly special opportunity pass you by.