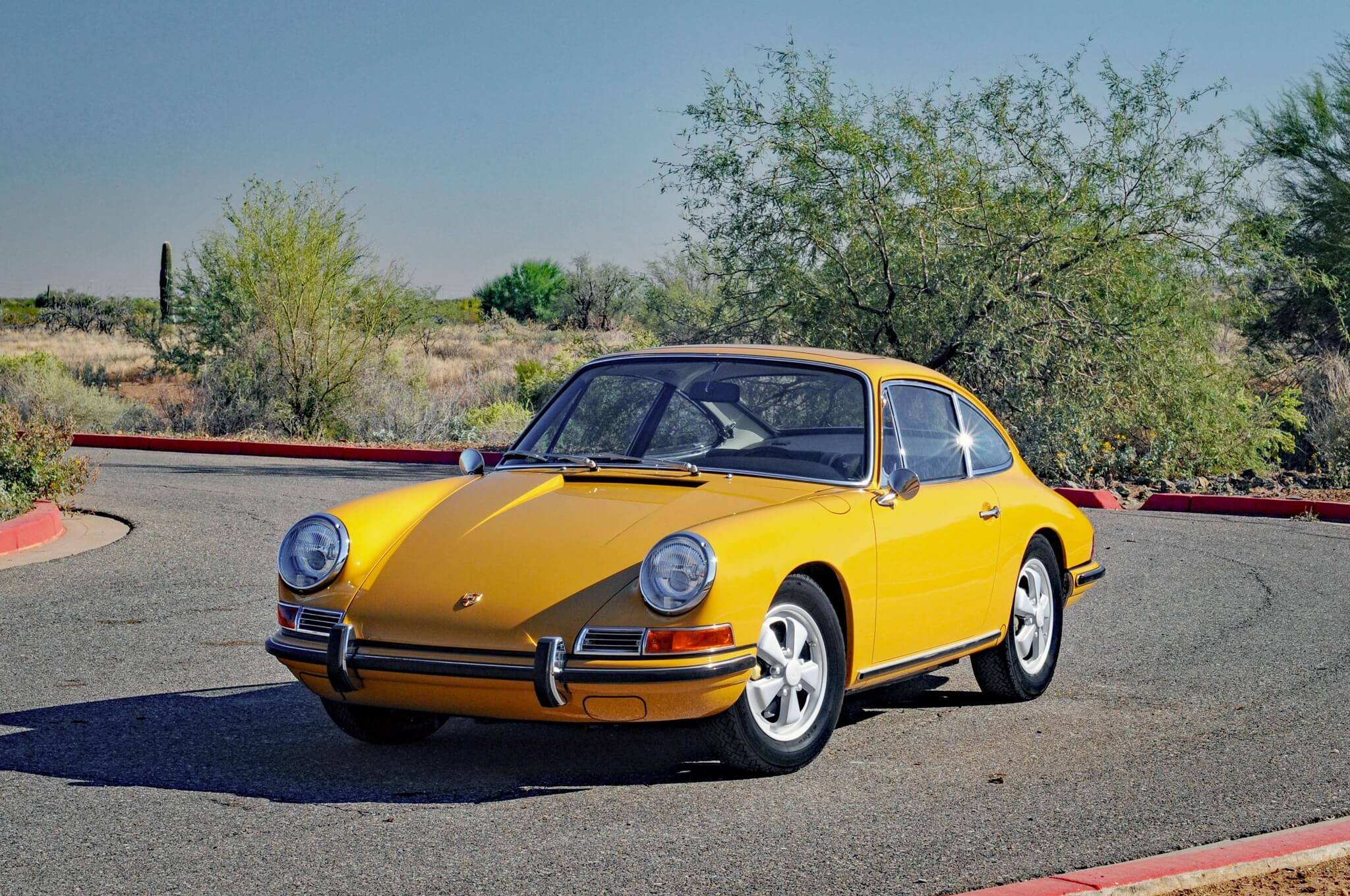 It is our pleasure to present this 1967 Porsche 911S Sunroof Coupe finished in Bahama Yellow over a black leatherette interior with Pepita cloth inserts.  Introduced in 1967, the range-topping 911S was Porsche’s very first “S” (Super) model 911.  Among the most desirable air-cooled cars of all, this first-year short-wheelbase 1967 example is said to have been sold new in California and came factory equipped with a “Webasto” heater, rear window wiper, and a rare sliding sunroof.  It had reportedly spent life stored under a cover in an airplane hangar in Monterey from the mid-1980s up until being acquired in August of 2010. At that time, a well-regarded Porsche collector from Northern California commissioned a no-expenses-spared, ten-year restoration at the hands of some of the most well-known marque experts in the world.  Among the finest examples of an early Porsche 911S you are likely to come across, this 1967 Sunroof Coupe has traveled less than 400 miles since its painstaking restoration and is now being offered for auction by its seller out of Arizona accompanied by original books, accessories, and a Porsche Certificate of Authenticity. 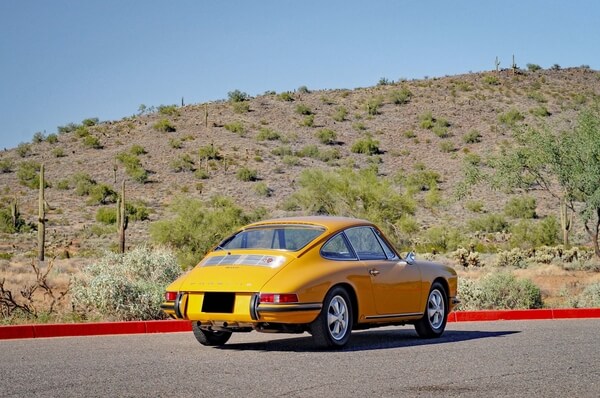 This 911S was refinished in its original shade of Bahama Yellow after body preparations were carried out meticulously by Porsche expert Dink Farmer.  The car exhibits excellent panel gaps and all badges and lettering appear as new along with the impressive brightwork. The hood badge was also professionally resorted. The factory sunroof is said to operate without issue and the wind deflector functions as intended. Offered one year only exclusively on the 911S, the incredibly rare date-coded 15” Fuchs forged aluminum wheels have been professionally restored by Harvey Weidman and dressed in a set of Pirelli Cinturato tires. 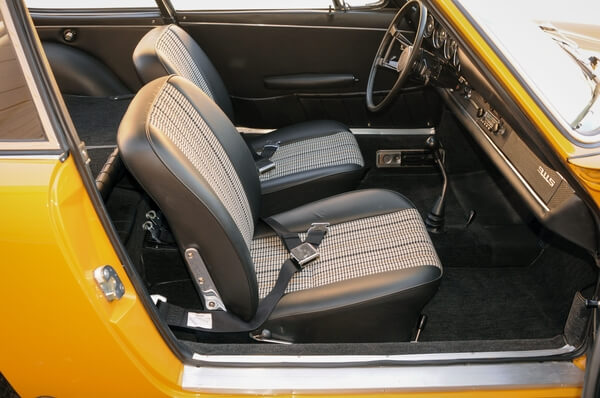 The interior, resorted by Autos International of California, appears as new with correct black leatherette upholstery, matching carpets, and Pepita cloth seat inserts.  The original leather-wrapped steering wheel has been reconditioned and all the original gauges were rebuilt by the specialists at Palo Alto Speedometer.  The electric rear window heater, rear window wiper, Webasto heater, antenna, loudspeaker, and tinted glass are all original options as confirmed by the Certificate of Authenticity from Porsche.  The original restored Webasto gas heater will be included in the sale but has been removed from the car for obvious safety concerns.  A set of Recaro Sport Seats trimmed in matching black leatherette and Pepita upholstery will also be included in the sale and can be seen in the gallery. 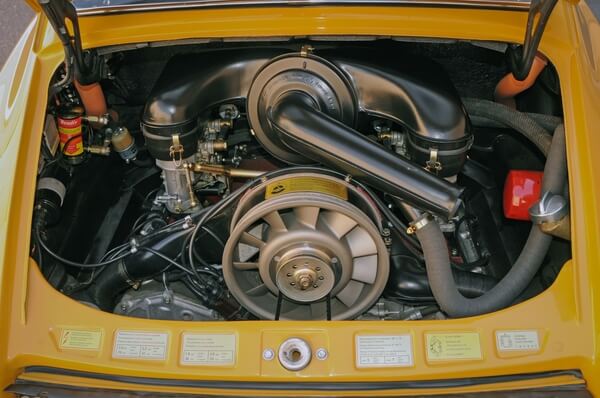 The 1967 911S was introduced with a new all-aluminum, single-overhead-cam, dry-sumped 2.0L engine that boasted a forged steel crankshaft, forged light alloy pistons, and soft nitride-forged steel connecting rods.  The engine was paired with a larger 42mm intake, 38mm exhaust valves, and a pair of 40IDS Weber Triple-throat carburetors.  The Type 901/02 engine delivers an output of up to 160 HP.  The 911S also came factory equipped with Koni shocks absorbers, a rear anti-roll bar, and upgraded brakes with ventilated discs. 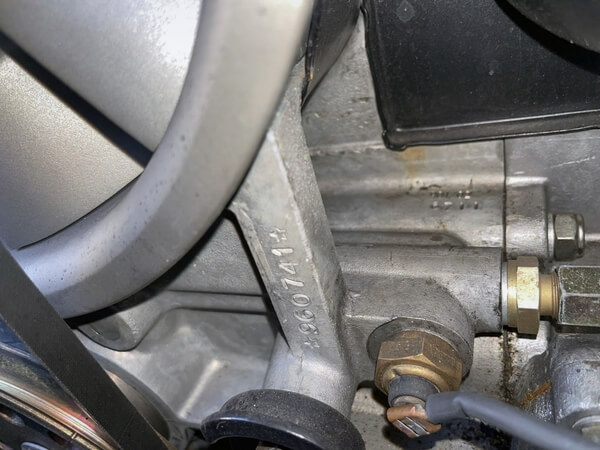 The numbers matching flat-six engine in this example was rebuilt and equipped with an aftermarket M&K “RS” style lightweight twin center-pipe exhaust by a Porsche engine and transmission specialist at Honest Bill’s of San Ramon, CA.  All machining was done by Porsche specialists at Ollie’s Machine Shop in Lake Havasu City, AZ. while the Weber IDS carburetors were rebuilt by 911 expert Paul Abbott of Performance Oriented in Salem, OR.  The brake calipers were rebuilt by the specialists at PMB Performance in Sandy, UT. With less than 400 miles since the restoration was completed, the engine bay remains finely detailed as does the undercarriage.  The seller describes all mechanical systems to be operating flawlessly at this time and some records are provided for reference in the gallery. 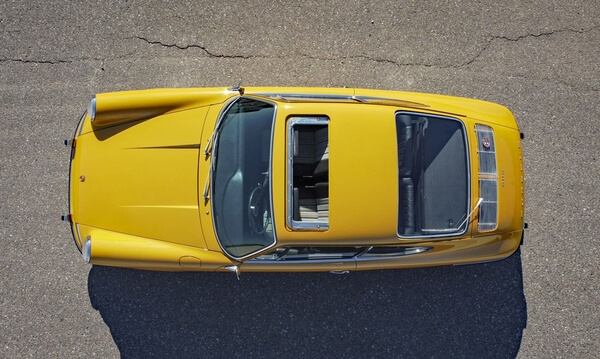 This sale will include the original owner’s manuals and toolkit, the original Webasto gas heater, an additional set of Recaro Sport Seats, and a Porsche Certificate of Authenticity.  Exhibiting unprecedented attention to detail and years’ worth of painstaking labor, this 911S has been restored to exceed the standards of even the most discerning collectors.  Do not pass on this rare opportunity to own an exceptional example of the first Porsche 911S.