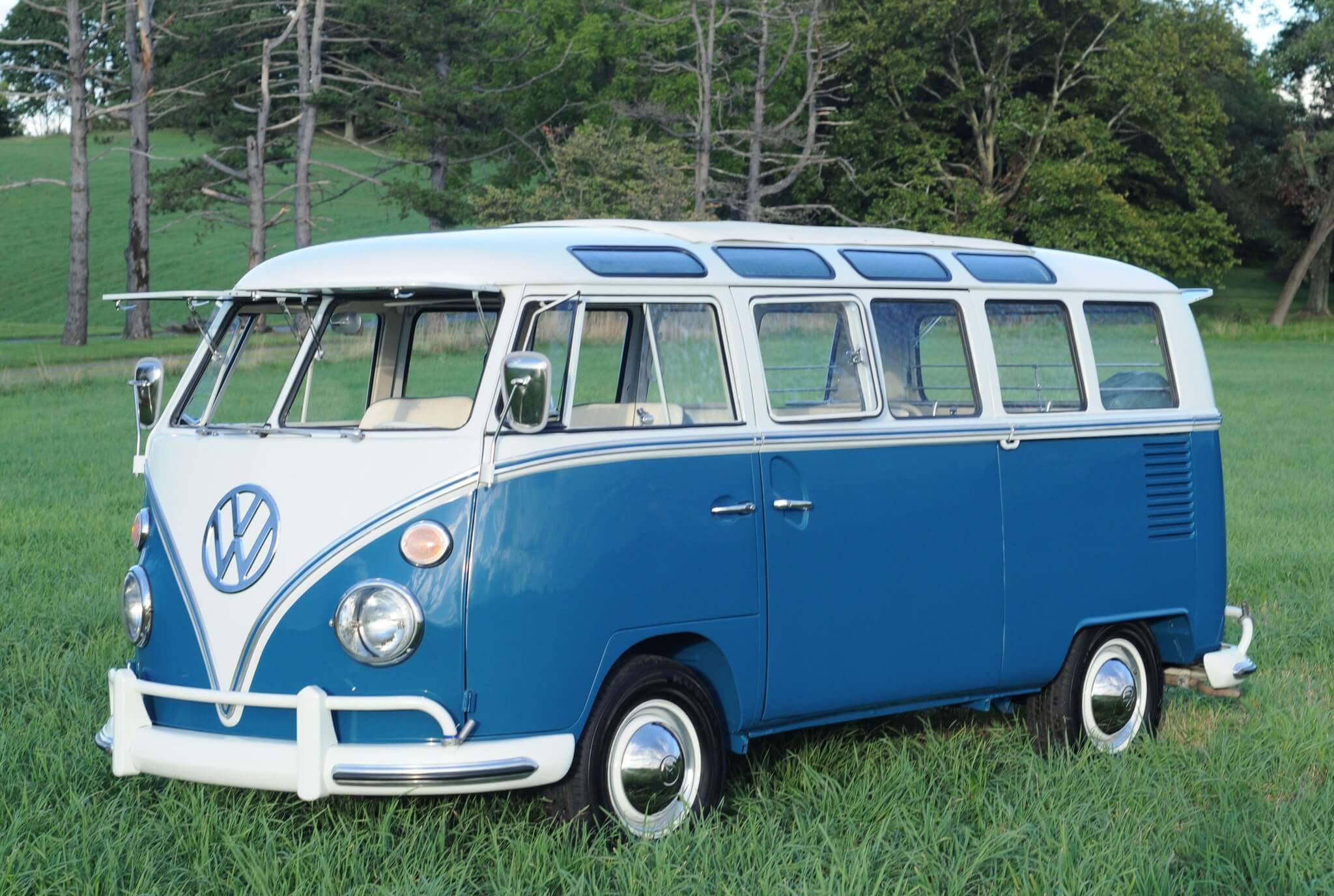 Up for auction is this 1967 Volkswagen Type 2 T1 Samba Sunroof Deluxe finished in two-tone Sea Blue and Cumulus White over an Aero Papyrus and Steel vinyl interior. Marking the final year of VW’s premium Samba model, this 21-window bus was delivered new in Oldenburg, Germany, with rare and highly desirable factory options including double sliding doors, safari-style front windows, a large fabric sunroof, Eberspaecher gasoline heater, and a walkthrough cab.  Acquired from a longtime owner in 2013, this bus was subsequently treated to a three-year-long restoration process back to its factory specifications.  Having been thoroughly sorted by the specialists at Graham Engineering & Motorsport, this incredibly rare and highly optioned Samba bus is now being offered for auction by its seller out of New Jersey. 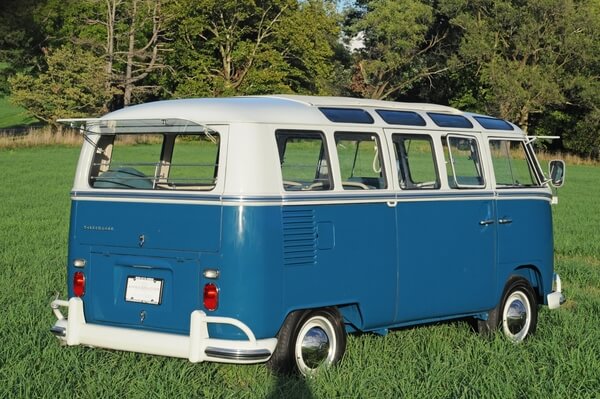 During the restoration, this bus was completely disassembled, stripped to bare metal, and refinished in its factory specified two-tone color combination of Sea Blue (360) and Cumulus White (680).  Many parts used during the restoration were of new old stock (NOS) and the vehicle's specifications are confirmed by a Stiftung AutoMuseum Volkswagen birth certificate.  Some touch-up paintwork and dent removal are reported to have been carried out on the roof in 2019 and the weatherstripping and safari windows were previously replaced. Detailed images of the exterior and photos from the restoration process are provided in the gallery.  Notable features include safari-style hinged front windows, sliding cargo doors on both sides, sealed-beam headlights, twin-reversing lights, a sliding cloth sunroof, and aluminum beltline trim.  This T1 rides on a set of white-painted 14″ steel wheels with chrome hubcaps and Kumho Solus tires dated from 2013. 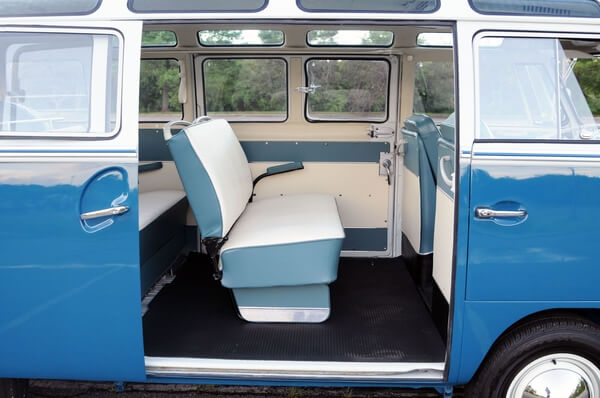 The cabin has been restored in its factory specified Aero Papyrus and Steel vinyl upholstery with matching door panels and black rubber-lined floors. Equipment includes lap belts, an analog clock, a painted steel dashboard, walkthrough front seats, a European "Fahrt Start" locking steering column/ignition switch, a cabin air vent system, a pushbutton radio, and a rare factory Eberspaecher gasoline heater which is currently disconnected.  A detachable factory awning is included and upgraded focal speakers have been installed below the dash along with an auxiliary radio adapter.  The replacement gauges were sourced from Orange Empire Speedometer of California and the odometer currently reads just under 1,500 miles. 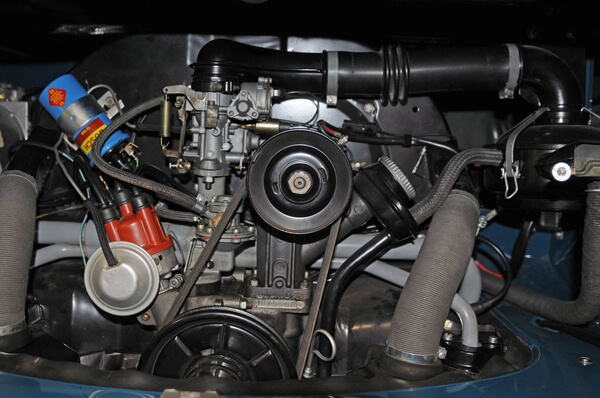 Power comes from an air-cooled 1,500cc flat-four cylinder engine that drives the rear wheels through a 4-speed manual transaxle. The seller notes that the original engine was replaced with a period-correct unit which has been completely rebuilt and restored to factory specifications. Extensive documentation has been provided showing the service history and restoration of the vehicle. Some of the notable items carried out within the last 3 years include repacked wheel bearings, a new shifter, torsion bar, swing arm bushings, an overhaul of the brakes, and new ignition components. More recently in 2021, the steering assembly was restored, the clutch cable was replaced, and both the fuel pump and carburetor were rebuilt. Corresponding service invoices and detailed images of the undercarriage are provided in the gallery. 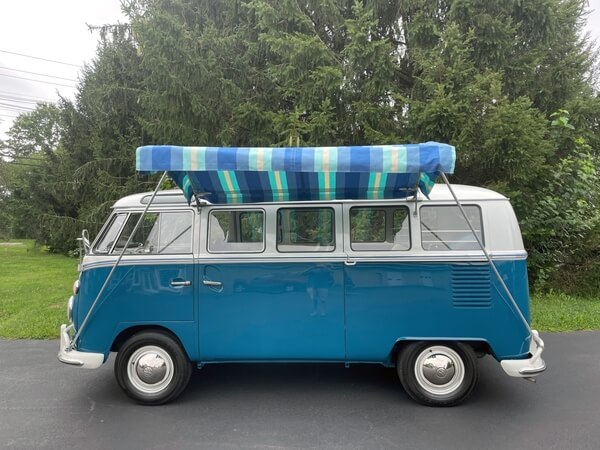 This sale will include a detachable awning, complete restoration records, a Stiftung AutoMuseum Volkswagen birth certificate, and a clean title. Among the most generously equipped examples you are likely to come across, this 21-window double-slider Samba is an incredibly rare find and a true holy grail for any VW bus collector.