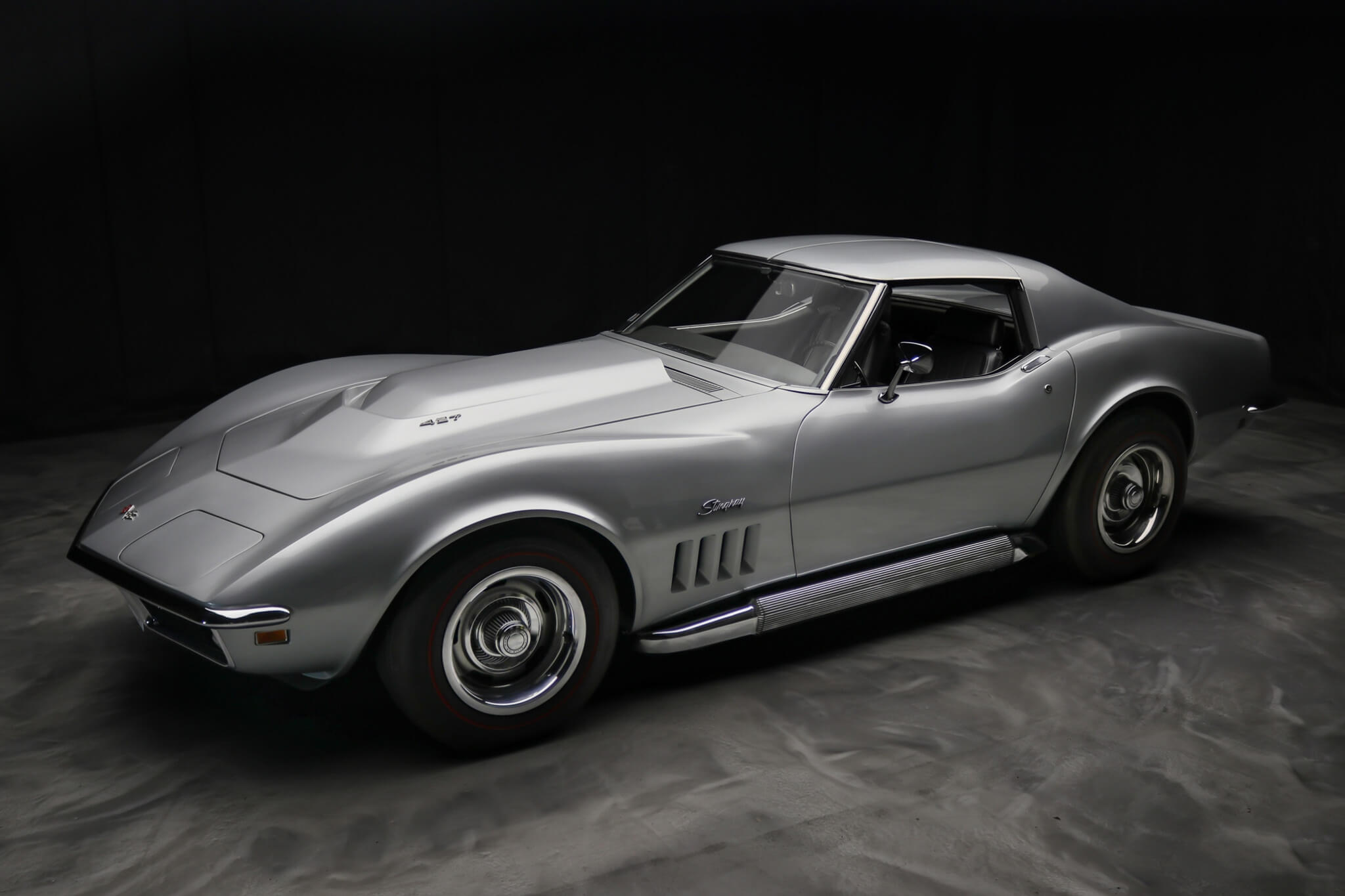 Starting in the 1967 model year, Chevrolet offered the L88 package for the outgoing C2 Corvette which equipped a competition-spec 427ci L88 V8 said to produce around 430 HP, although estimates were closer to 550 HP. The package included the L88 engine fitted with open-chambered aluminum cylinder heads, a performance camshaft, a 12.0:1 compression ratio, and a four-barrel Holley carburetor, paired with a 4-speed manual Muncie “Rock Crusher” transmission, a Positraction rear end, the J56 heavy-duty braking system, and the F41 suspension package. The L88 Package continued to be offered in 1968-1969 with the newly introduced C3 Corvette and was only selected for 216 examples across the entire three-year production run, with just 116 built in 1969. This particular Corvette was delivered new to Lee Johnson Chevrolet of Kirkland, Washington, finished in Cortez Silver over a Gunmetal vinyl interior, and had two owners in Washington state before being relocated to the Midwest in 1973. It has reportedly received a replacement engine under previous ownership and full restoration in 1997 by Naber’s Motors of Houston, Texas, subsequently receiving an NCRS Top Flight Award, Bloomington Gold certification, and inclusion in the 1998 Bloomington Gold Special Collection. Acquired by the seller in 2022, this L88 C3 Corvette is now being offered at auction out of Pennsylvania. 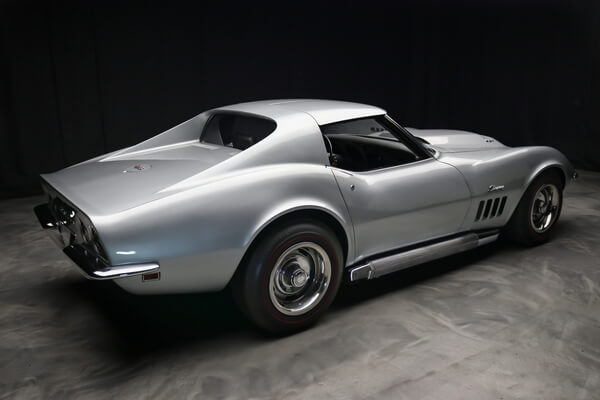 The exterior was ordered in Cortez Silver (986) and was said to have been subject to a full refurbishment in 1997 by the Naber brothers, known for their high-end Corvette restorations. Equipment includes removable paint-matched T-top panels, pop-up headlights, a side-exit exhaust system, “Stingray” fender badges, “427” hood badges, chrome bumpers, a driver’s side chrome mirror, hide-away windshield wipers, and a model-specific L88 high-clearance hood with an integrated air plenum chamber. Detailed images depicting the condition of the exterior are provided in the gallery.  The painted 15” wheels wear chrome hubcaps and are mounted with F70-15 Firestone Wide Oval redline tires. 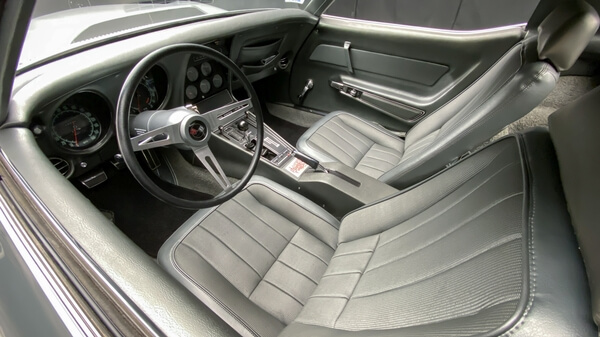 The interior is upholstered in Gunmetal (416) vinyl with twin bucket seats featuring Comfortweave inserts, and a matching dashboard, door panels, and loop carpeting. The L88 package deleted the air conditioning, heater, and radio for weight savings. Details include a three-spoke steering wheel, a decal on the console warning a minimum of 103 octane race fuel must be used, starting instructions on the driver’s visor, roll-up windows, a black ball shifter and matching pistol grip handbrake, and auxiliary instrumentation in the center stack for fuel level, oil pressure, coolant temperature, and amperage, along with an analog clock. 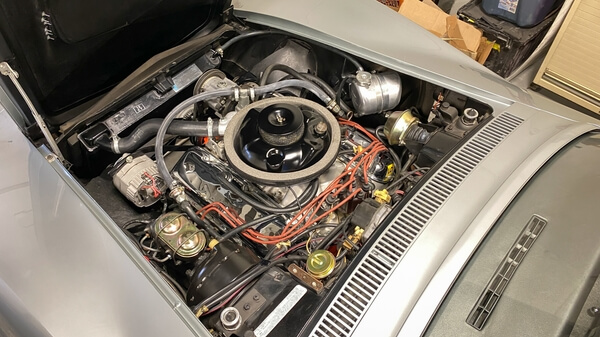 The 427ci L88 V8 under the hood is a replacement that was installed at some point under previous ownership, with a restamped block pad showing a VIN matching the vehicle and a T0923LO engine code. The horsepower of the L88 V8 was understated by Chevrolet at 430 HP, although it produced closer to 550 HP thanks to aluminum cylinder heads, forged internals, solid lifters, a performance high-lift camshaft, an aluminum intake manifold, and a Holley four-barrel carburetor. The rear wheels are driven by a Muncie M22 “Rock Crusher” four-speed manual transmission and a 3.70:1 Positraction rear end. By selecting the L88 package, the F41 heavy-duty suspension package was mandatory and included a seven-leaf rear leaf spring, stiffer front springs, unique shock absorbers, and a rear anti-roll bar. The J56 braking package was also mandated, which equipped high-performance calipers with twin retaining pins, L-shaped brake pads, and stiffening brackets on the front calipers. Factory markings as shown in the gallery include: 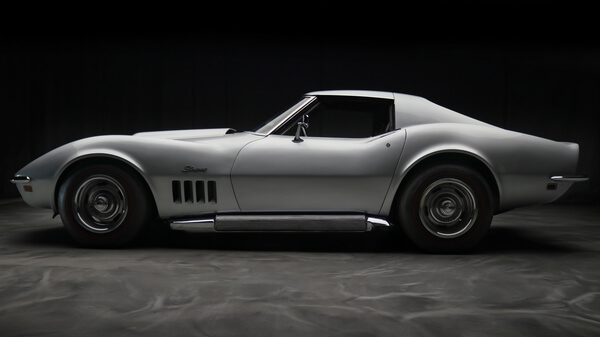 This sale will include a copy of the Car Shipper detailing the build and confirming its original options, the GM warranty card, Protect-O-Plate, owner’s manual, copies of previous titles and ownership transactions, and maintenance records, in addition to judging sheets and certification from the 1997 NCRS and Bloomington Gold honors.