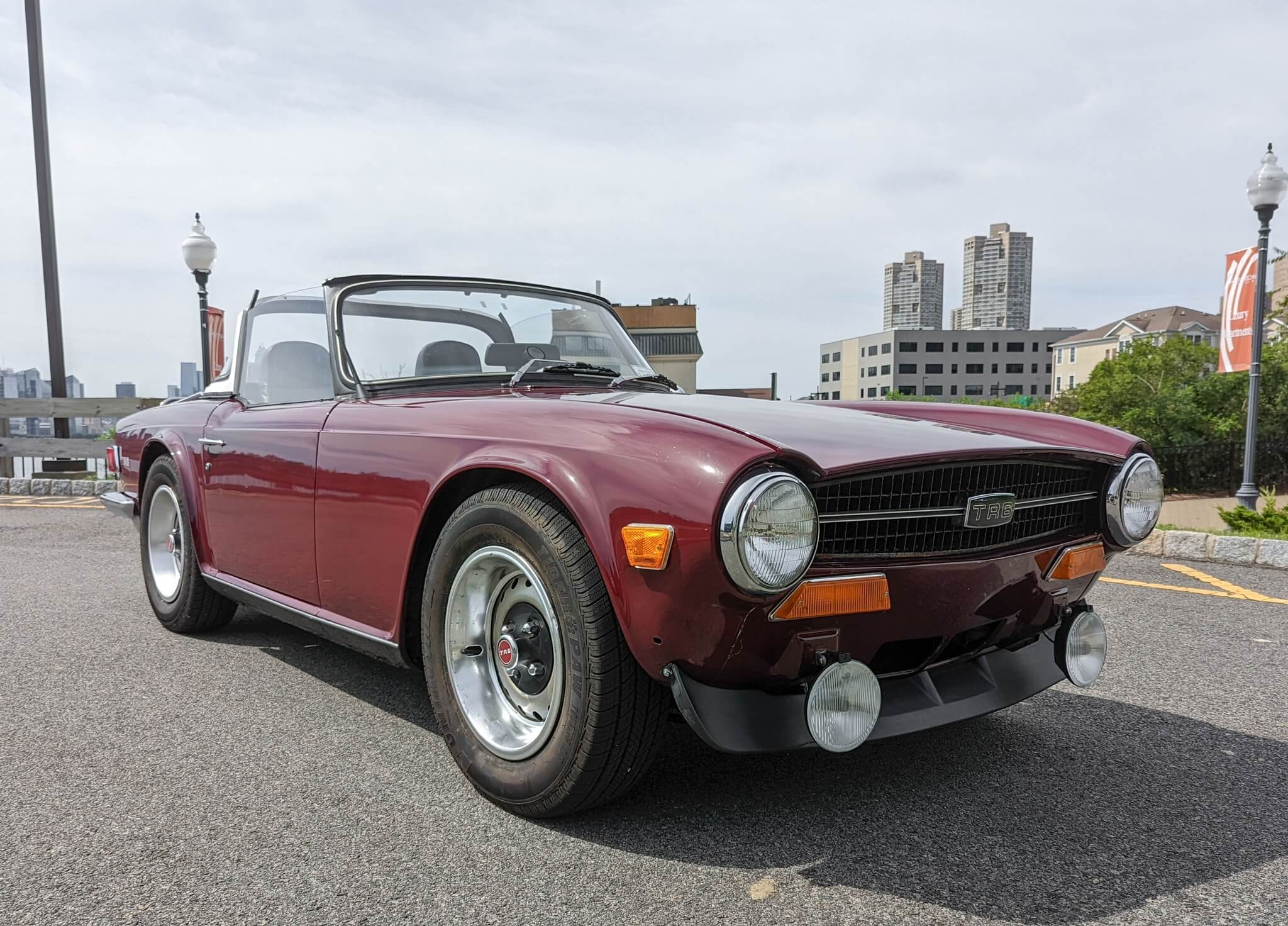 The Triumph TR6 was introduced in 1969 as the successor to the TR5, with a Karmann-styled body, more trunk storage, wider wheels, and a standard front anti-roll bar. This 1970 example is finished in Damson Red over a black interior and was acquired by the seller in 2020 from its second owner out of Central Pennsylvania who had the car since 1996. Upon purchasing this TR6, the seller had the vehicle inspected by a Triumph/MG specialist and during the course of their ownership, replaced the clutch, slave cylinder, transmission seals, differential mounts, head gasket, rebuilt the transmission linkage, and mounted new tires. Modifications include a front bumper delete with fog lamps, recovered Mazda Miata seats in black vinyl, a later model front air dam, a TR4-style “Surrey” rear windscreen and soft top, a Richard Good GP3 camshaft, MCHH 45 side-draft Webers carburetors, a Retrosound radio, an upgraded radio aerial, a boot-mounted luggage rack, an upgraded radiator fan, a battery cut-off switch, LED instrument lighting, and more. 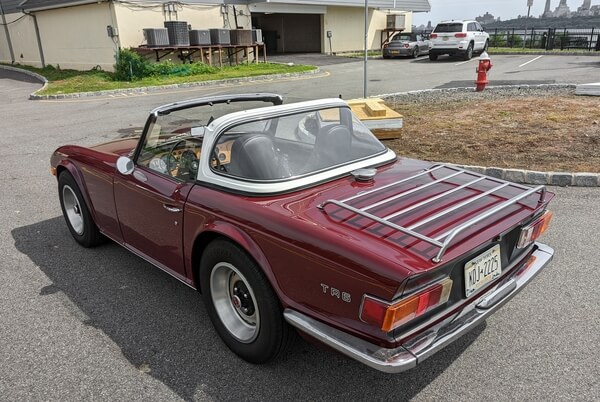 The exterior is finished in Damson Red (17) with a white TR4-style “Surrey” soft top and windscreen from Rimmer Bros. Exterior features include a later-model front air dam and fog lights which have replaced the original front bumper, a chrome rear bumper, a boot-mounted luggage rack, TR6 quarter panel badging, a Monza-style fuel filler, and a dual-tipped exhaust outlet. The seller reports areas of the vehicle appear to have been touched up and notes a ding on the driver’s side front fender, a scuff on the rear deck near the driver’s side B-pillar, and a paint chip on the edge of the trunk lid. Detailed images are provided in the gallery. The 15” steel wheels wear aluminum trim rings and were mounted with Uniroyal Tiger Paw tires in 2021. 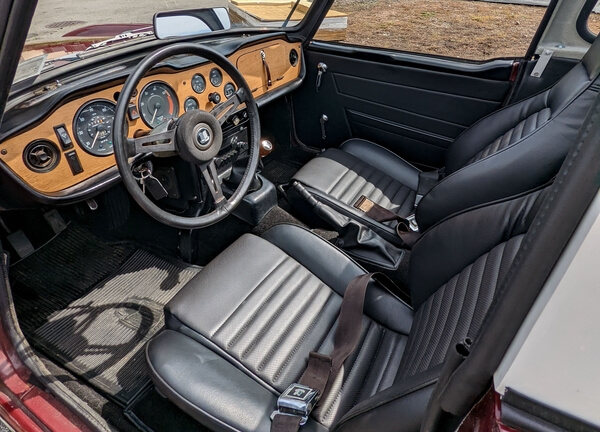 The interior features two Mazda Miata seats which have been recovered in black vinyl and paired with new matching door panels and carpeting. Modifications include a Retrosound radio with Sony speakers, a new relocated to the dashboard, a gooseneck phone holder, LED lighting behind the instrument panel, and a battery cut-off switch. The seller reports an issue with the voltage stabilizer resulting in limited movement of the fuel and temperature gauges as well as some sun fade to the wood dash panel and a missing escutcheon for the hazards lamp. 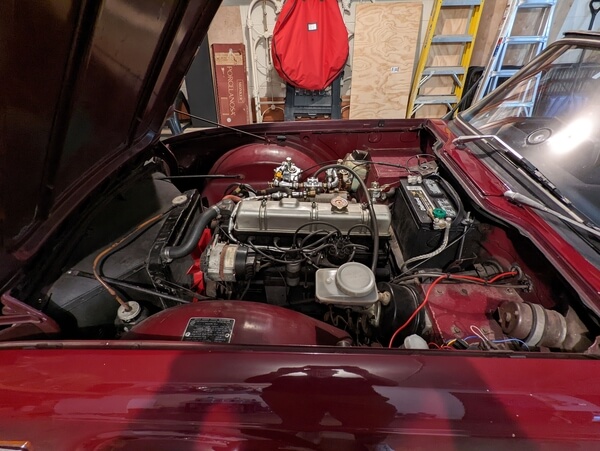 The Triumph TR6 is powered by a 2.5L straight-six producing up to 104 HP and 143 lb.-ft of torque, sent to the rear wheels by a 4-speed manual transmission. The seller reports the engine has been fitted with a Richard Good GP3 race camshaft and 45 MCHH side-draft Weber carburetors that were installed under previous ownership. Under the seller’s care, the head gasket, oil filter, fuel filter, and associated seals were replaced, as well as the clutch, clutch hoses, slave cylinder, transmission seals, and a new fiberglass transmission tunnel. The transmission linkage was rebuilt, along with the repair of a bent shift fork, the starter was refurbished, a new battery was installed, fluid was drained and replaced for the clutch and braking systems, and a new heater valved was fitted. The seller recommends tuning the carburetors and refreshing the suspension for optimal performance. 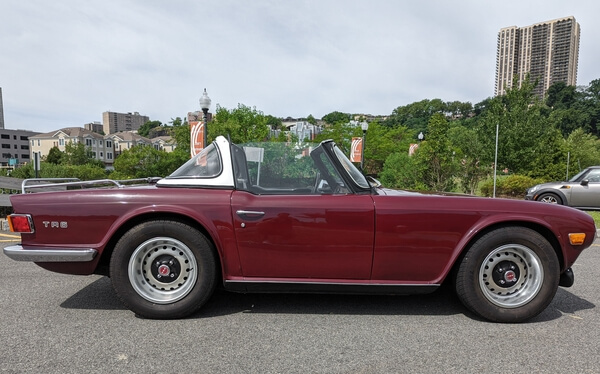 This sale will include a transferrable registration, owner’s manuals, a full-sized spare, a jack, a lug wrench, boxes of extra parts, air cleaners for carburetors, and extra fluids.