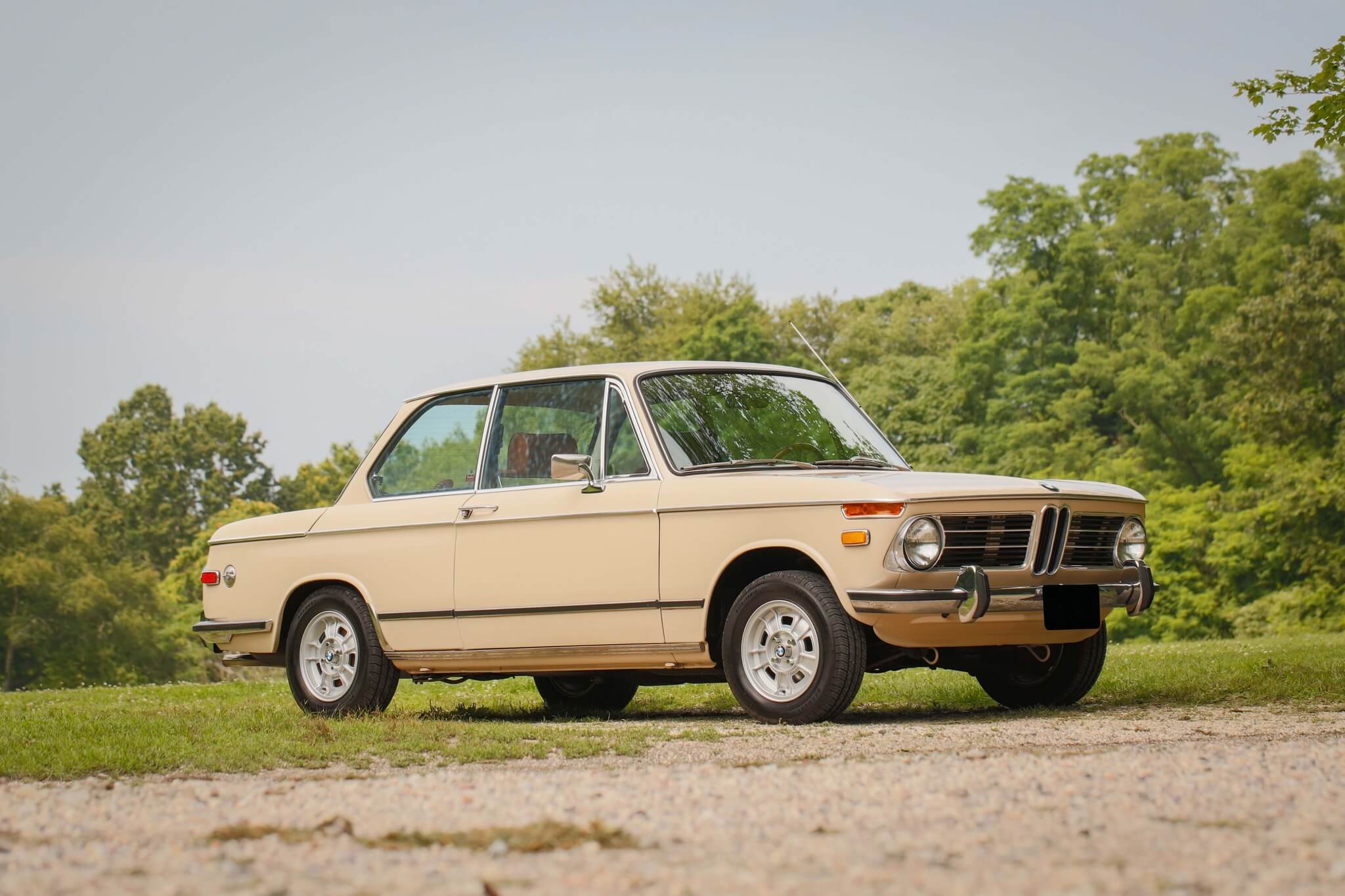 Now available for auction is this 1972 BMW E10 2002tii finished in Sahara over a Saddle vinyl interior. Created following Max Hoffman’s request for a sporting version of BMW’s “Neue Klasse'' 02 Series, the 2002 is widely regarded as the car that brought BMW to the forefront of the U.S. automotive market. The 2002tii (Touring Injection International) debuted in 1971 with Kugelfischer mechanical fuel injection, which offered a substantial increase in both performance and reliability. This 1972 example was purchased by the previous owner from a classic automobile dealership that had acquired it from the original owner. During their ownership, this 2002tii was treated to an extensive refurbishment including a full repaint of the exterior as well a mechanical overhaul. It was purchased by the current owner 11 years ago and has been kept up to date on routine maintenance ever since while being driven approximately 2k miles. Reported to currently show just over 48k original miles on the odometer, this outstanding 2002tii is being offered for auction by its seller out of New York. 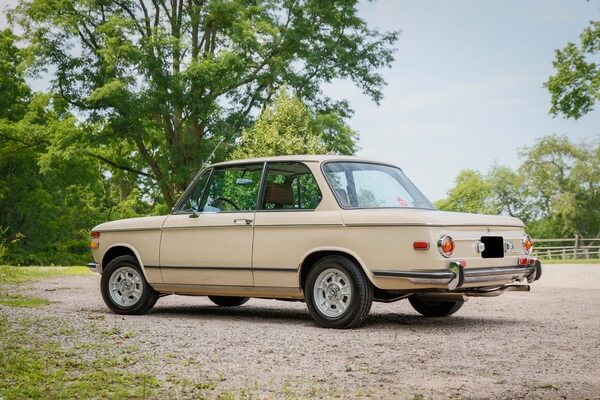 Under the previous ownership, the body of this 2002 is said to have been stripped down to bare metal and then refinished with a two-stage base coat in the original nonmetallic color of Sahara (006) and then clear coated along with the engine bay, door sills, and trunk compartment.  The rocker panels and doglegs were refinished in their original texture, and the undercarriage was rust-inhibited and treated with a protective coating. The original glass is said to have been retained and brand-new mirrors have been installed as well as a new OEM antenna and many new exterior moldings and trim pieces.  Detailed images are provided in the photo gallery.  This 2002tii rides on its original 13” FPS alloy wheels, which are dressed in new Michelin Harmony tires. 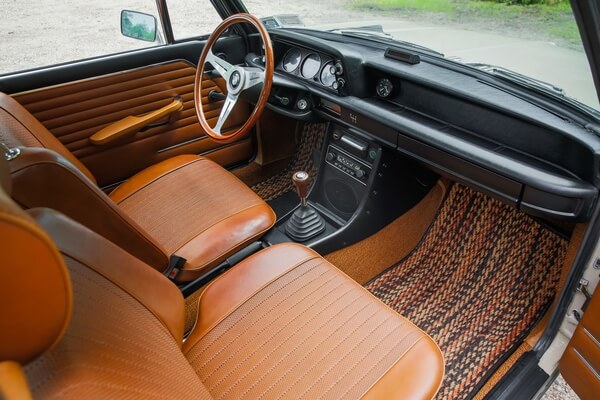 The cabin is upholstered in Saddle tan vinyl with matching carpets, door cards, and bucket seats. The interior has been refreshed with many new parts including the door panels, water seals, pedal covers, shift knob, shift boot, and a rebuilt center-mounted analog clock. Dynamat sound insulation has been applied to the floor pan, and custom-made period-correct Coco mats cover the new carpeting. The interior lighting and gauges are said to be fully functional, including the “fasten seat belt” illumination unit on top of the dashboard and its associated warning buzzer.  The radio has been replaced with a new period-correct Blaupunkt unit, as well as the center Alpine speaker’s surrounding bezel. A Parrot Bluetooth system has also been integrated and works in conjunction with the center speaker.  A Nardi three-spoke wood-rimmed steering wheel sits ahead of a 120-MPH speedometer and a 6400-RPM tachometer, as well as gauges for fuel level and coolant temperature. The previous owner had also fitted a brand-new keyless entry system with power locking doors. 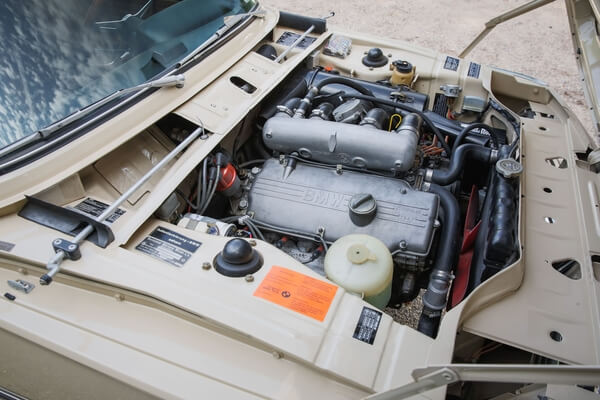 Power is supplied by a 2.0 L M10 inline 4-cylinder engine featuring Kugelfischer mechanical fuel injection. As much as 130 HP and 131 lb.-ft of torque are sent to the rear wheels through a 4-speed manual gearbox.  As part of the mechanical overhaul carried out by the previous owner, the M10 engine received new vacuum lines, a new valve cover gasket, and a new rear main seal. The transmission and oil pan underwent a complete reseal along with the installation of a new differential.  The ignition system was also overhauled with new spark plugs, boots, wires, fuses, and a battery. Since the seller's purchase 11 years ago, proper routine maintenance has been observed including mechanical adjustments and fluid/filter changes. The seller describes this 2002 to be in strong mechanical order and up to date on all routine maintenance. 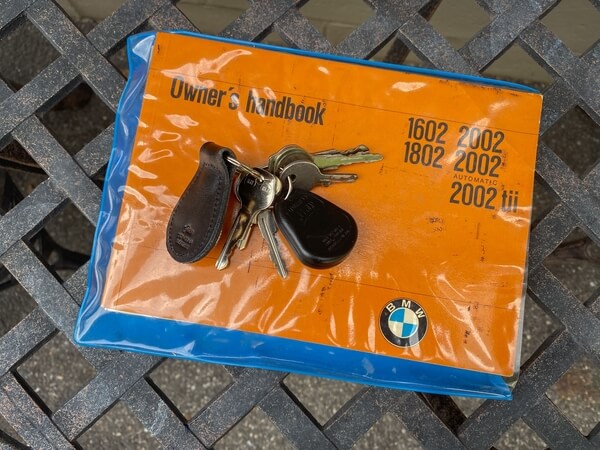 This sale will include multiple sets of keys, the original owner’s handbook with BMW vinyl wallet, and a transferrable New York registration.  A fine example of one of BMW’s most iconic sports cars, this beautifully presented 2002tii is ready to be enjoyed by a new owner.