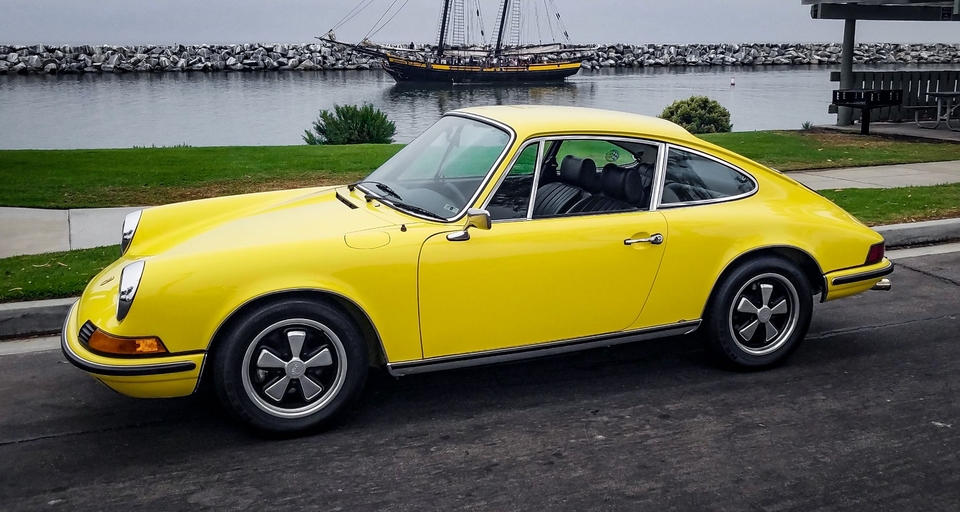 Up for auction is this fully restored 1973 Porsche 911T Coupe finished in its factory correct color combination of Light Yellow over a Black leatherette interior.  A lifelong California car, this U.S. spec 1973.5 example is among the first Porsche 911T’s to be equipped with Bosch CIS fuel injection and one of the last 911’s to feature a desirable long hood configuration. This coupe also showcases premium factory options including 911S trim, brakes and shocks as well as front and rear stabilizer bars.  Having recently undergone a complete restoration at a cost of over $65k, this number’s matching 911T shows 17,428 miles on the odometer is now being offered by its seller in California accompanied by a Porsche Certificate of Authenticity. 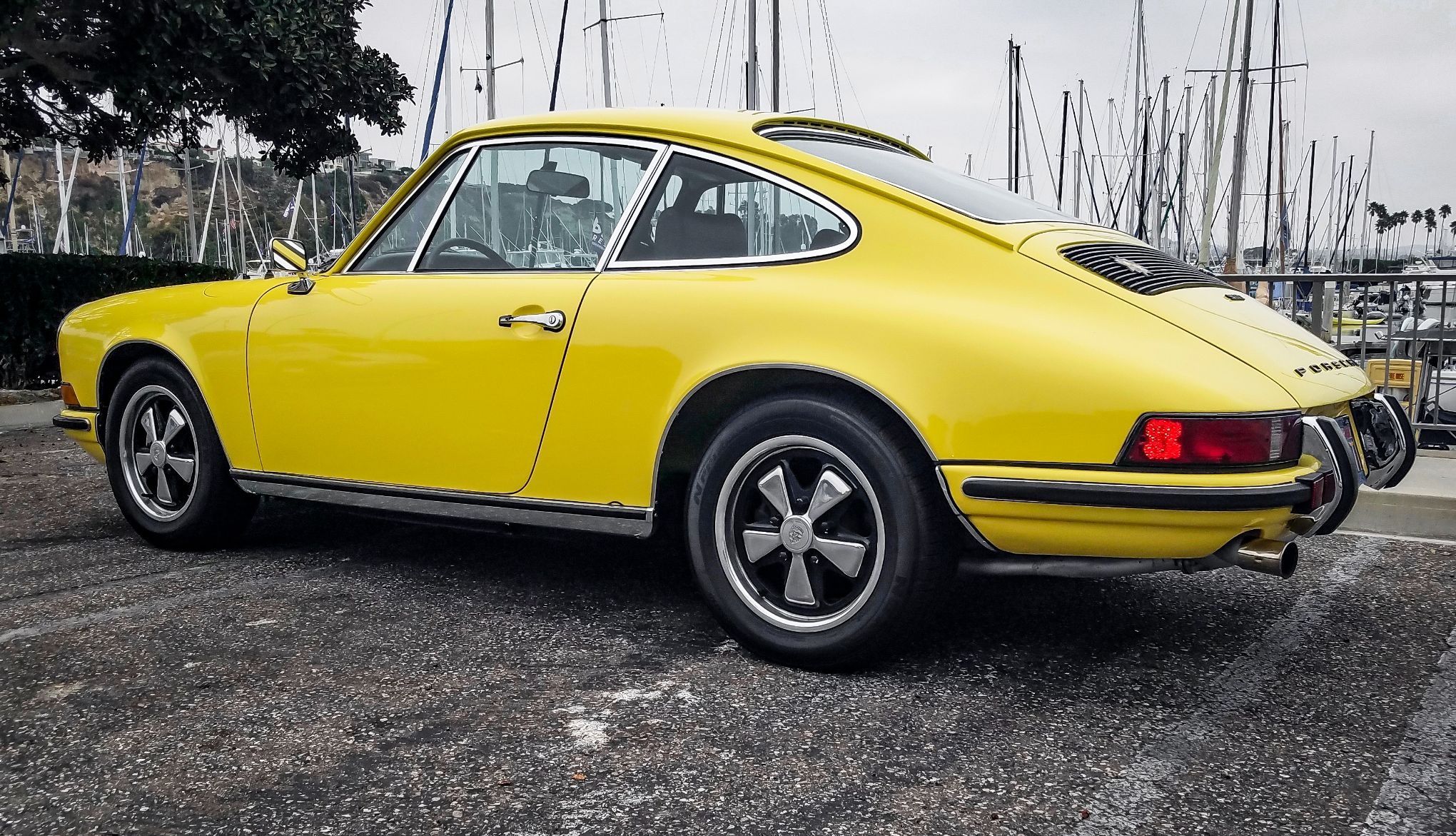 This 911 was treated to a full glass-out respray in its factory original color of Light Yellow.  All of the original body panels have been retained with the exception of the small tray below the rear shelf.  The exterior brightwork was restored during this time and the front windshield was replaced, although the rest of the factory tinted glass on the car is reported to be original.  This coupe highlights factory optional 911S-type trim, a chrome rear fender strip and pop-out rear quarter windows as well as European-spec bumpers which were added during the restoration.  The finish is reported to be in exceptional condition with less than 2000 miles driven since the completion of the restorative work (detailed images are provided in the photo gallery).  The original forged alloy Fuchs wheels have been refinished, polished and dressed in brand-new period correct tires. 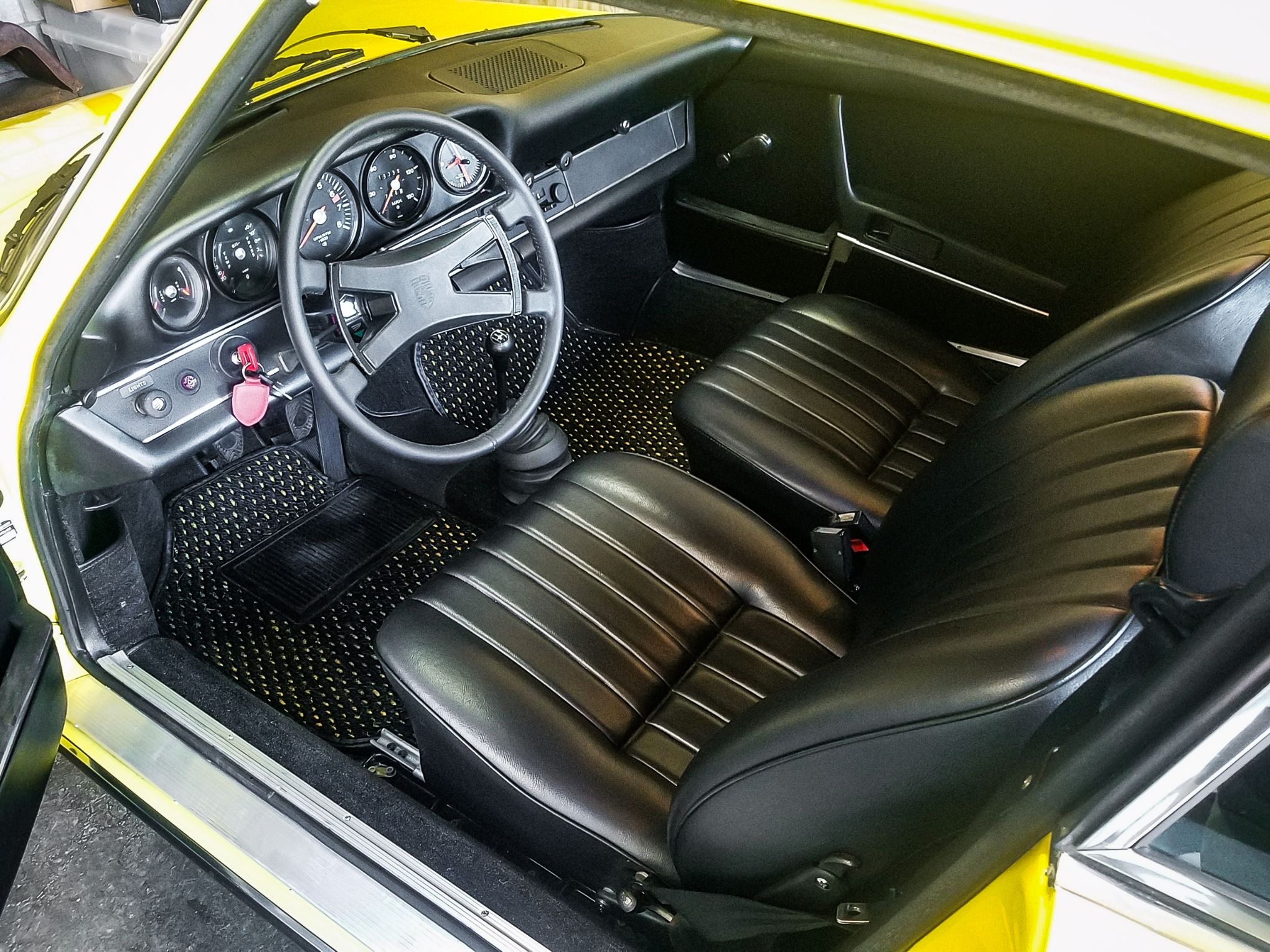 Inside, the Black leatherette interior has been entirely restored to factory standards with brand new carpeting and headliner as well as a reupholstered dashboard, front seats and steering wheel. The original door cards have been retained and fitted with new door pockets.  This example is factory optioned with the Comfort Equipment package which includes 911S-type gauges and a leather-bound steering wheel.  A reproduction Blaupunkt radio is currently installed, although it is not operational as the speaker has been removed from the dashboard.  The seller confirms all other accessories and gauges to be working properly. 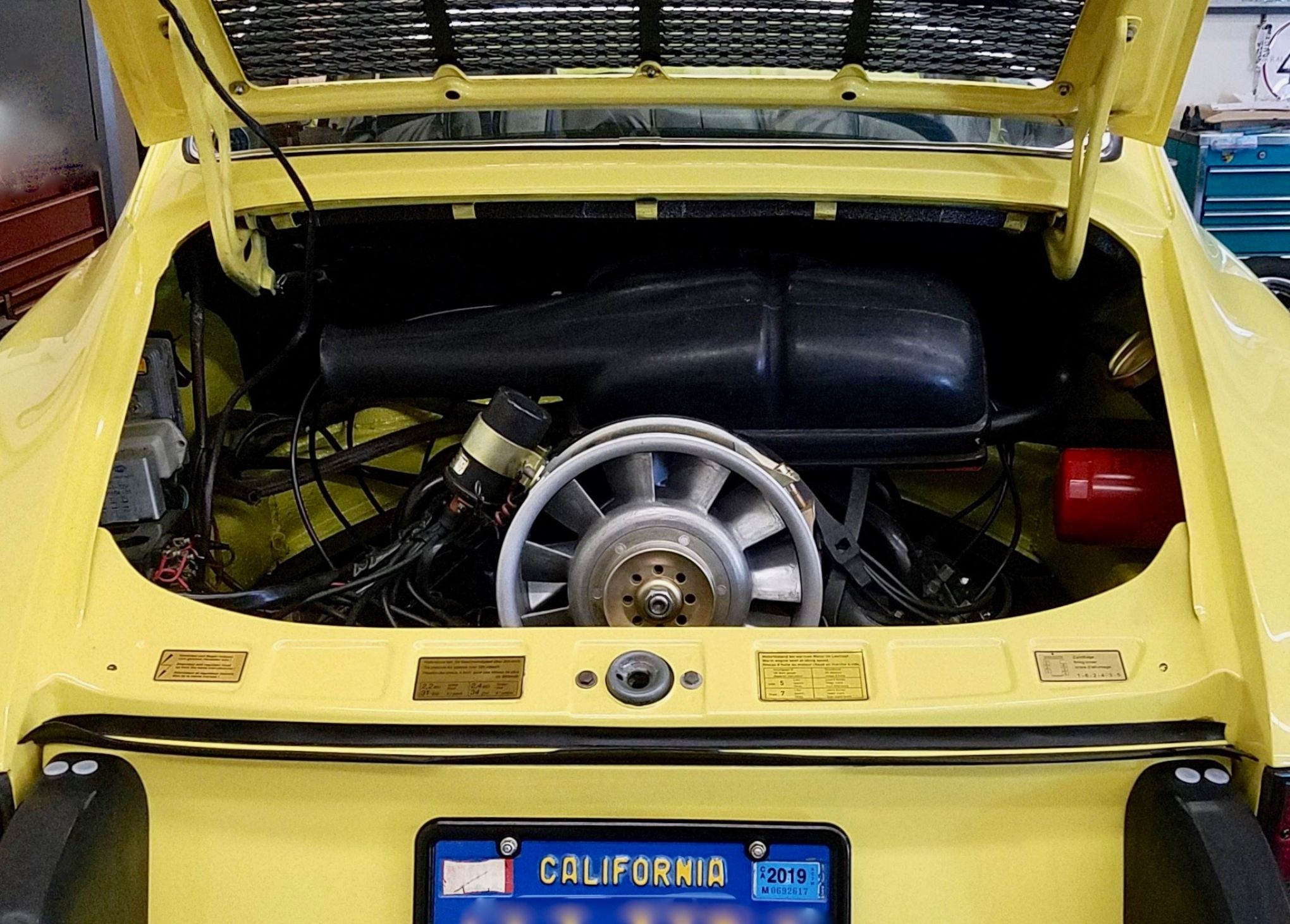 One of the first 911T’s to feature Bosch CIS fuel injection, this example is equipped with its original 140HP 2.4 L flat-six engine which is paired with a numbers-matching 915 5-speed manual gearbox.  This 911T is also factory equipped with Porsche 911S-spec brakes and Koni shocks in addition to front and rear stabilizer bars which considerably enhance the overall driving experience.  An image of the Porsche Certificate of Authenticity is included in the gallery along with restoration photos. 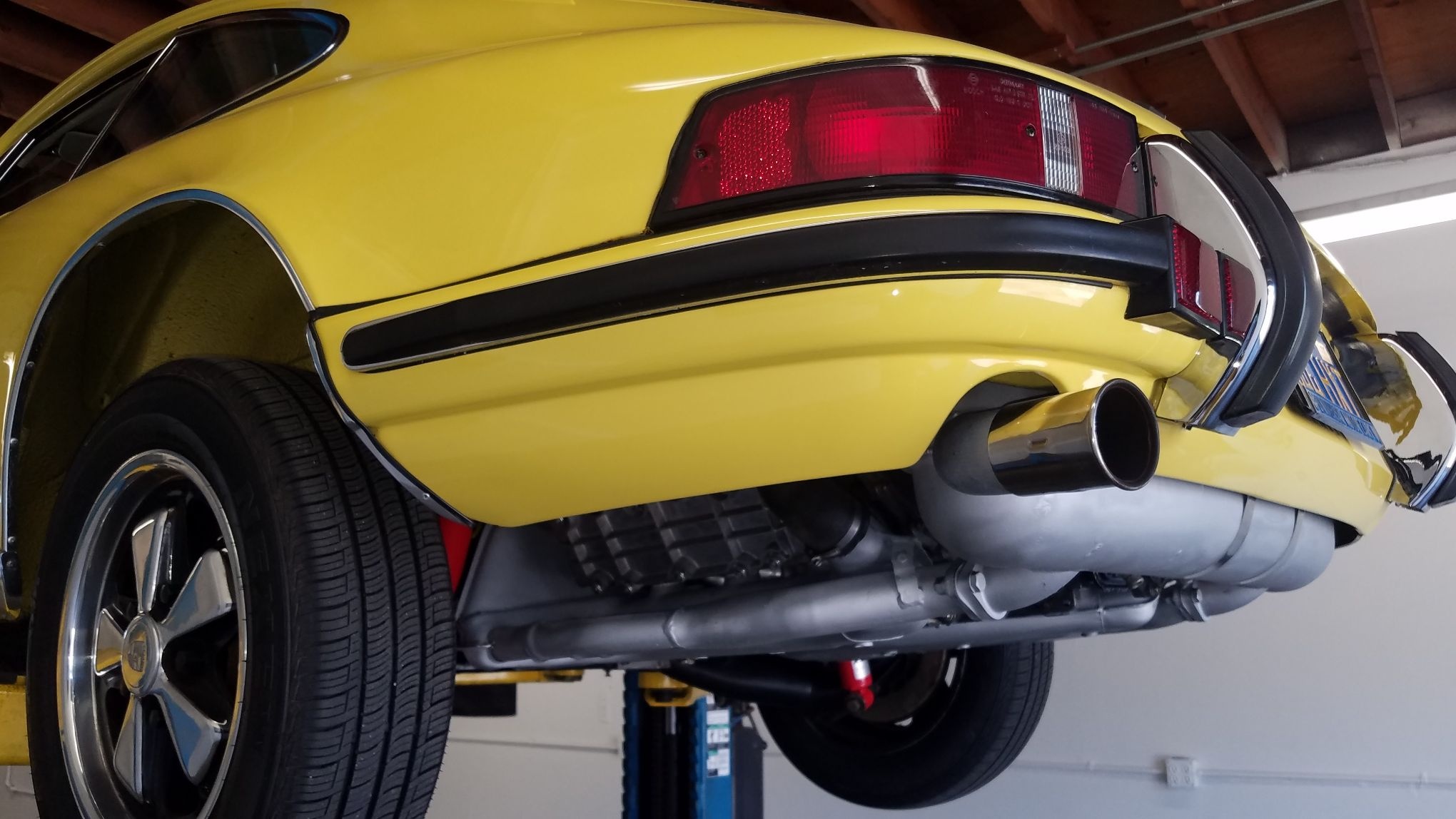 A full rebuild of the flat-six engine was performed very recently by OC Factory in Laguna Beach at a cost of over $24k.  California Porsche Restorations also carried out a complete rebuild of the transmission and suspension as well as the general reassembly of the car.  Less than 1500 miles have been driven on the rebuilt motor and this 911 is said be in in outstanding running order with service records and invoices dating back to the early 1970’s. 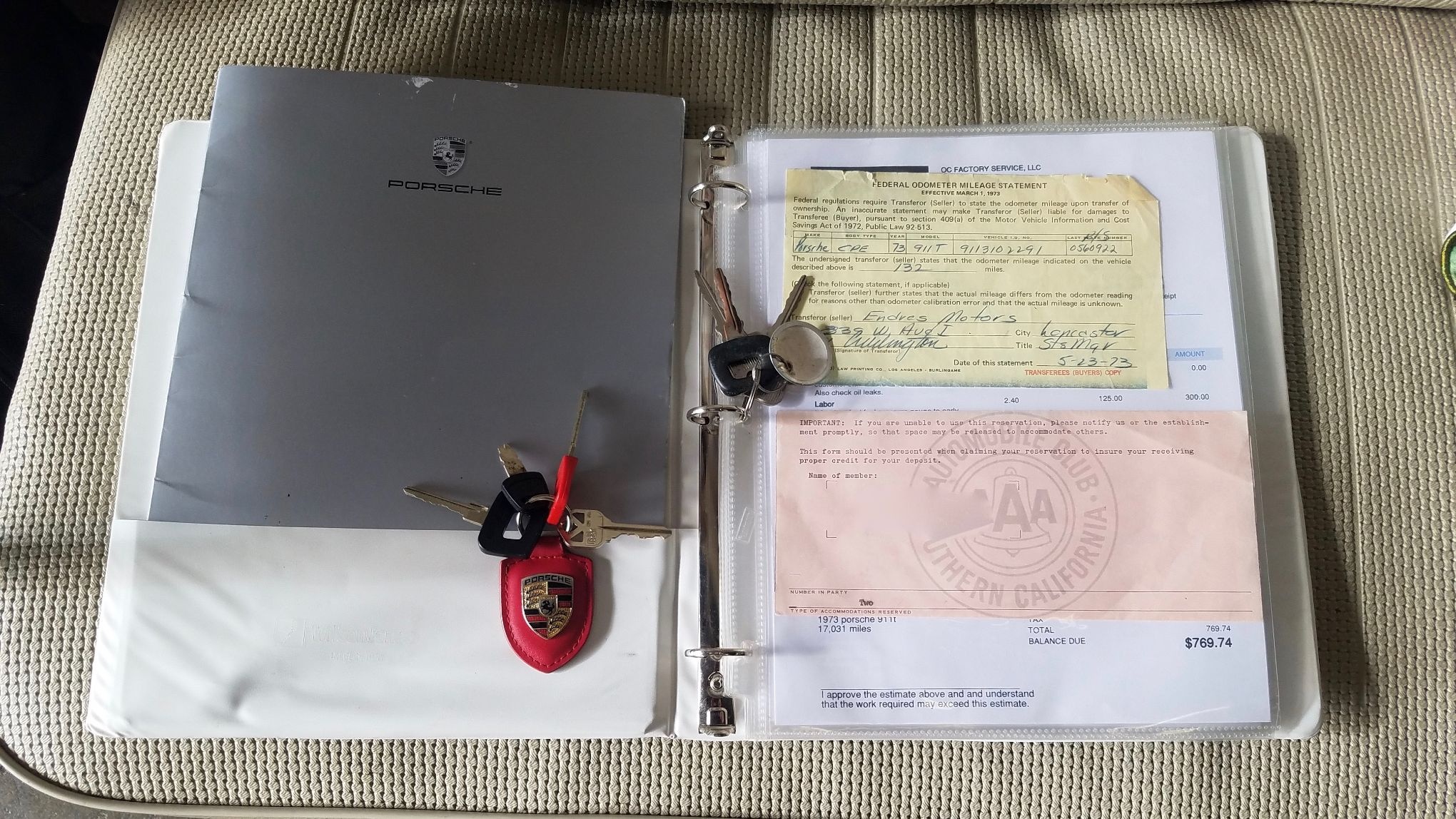 This sale of this beautifully restored 911 will include 4 sets of keys (2 original, 2 reproduction), the original jack, spare tire, tools and owner’s manuals, a Porsche Owner’s grille badge, and the original California blue vintage license plates.  Also included is the Porsche Certificate of Authenticity, a collection of records and a clean California title.  Having been painstakingly restored to a very high standard, this beautifully appointed ’73 911T is sure to satisfy any vintage Porsche aficionado.