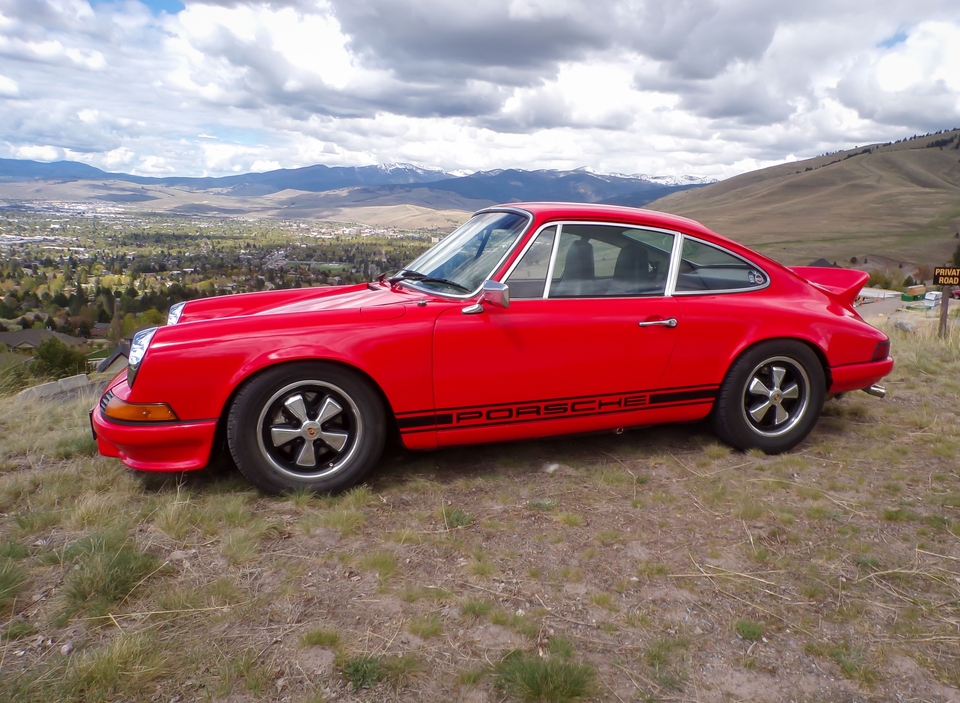 Up for auction is this 1973 Porsche 911T RS-style tribute finished in Guards Red over a black interior.  Already equipped with an upgraded 2.7L fuel-injected engine, this non-sunroof 1973 example was purchased by its current owner in 2010 and has since been transformed into the custom RS-style tribute we see today.  It received RS-style bodywork, interior refurbishment, and a host of performance improvements including a new MSD ignition system, a new clutch and flywheel, an Elephant Racing oil cooler, and a front strut stabilizer bar.  Having been driven approximately 2k miles under the current ownership, this custom 1973 911T is now being offered for auction out of Montana accompanied by owner’s manuals, tools, and records dating back to the 1970s.

This 911T is said to have been refinished in the traditional shade of Guards Red under previous ownership. The original color of the car is noted to have been Irish Green and the seller indicates some minor cosmetic imperfections including a small chip on the front hood.  A new windshield has been installed and a small area of rust is said to have been professionally repaired on the driver’s side front fender.  The seller also reports the car to have been garage-kept throughout their ownership and only driven under ideal conditions, detailed images are provided in the photo gallery.  Externally, this 911T has been modified with an RS-style front bumper, a classic Ducktail rear spoiler, Porsche side graphics, and a right-side mirror for added safety.  It rides on a set of genuine 15" Fuchs wheels with painted center caps and Kuhmo tires. A full-size spare Fuchs wheel is included in the trunk.

Under the current ownership, the black interior has been refurbished with new carpeting, headliner, RS door panels, and sun visors.  The speedometer was rebuilt by North Hollywood Speedometer and later-model seats with corduroy inserts have been installed along with a MOMO steering wheel and a period Blaupunkt Frankfurt radio.  The true mileage remains unknown, and the windshield washers are reported to be nonfunctional.

Prior to the seller’s purchase, this 911T was fitted with a 2.7L fuel-injected flat-six engine sourced from a U.S.-spec 1975 911 Carrera (#6451005).  The car has since been fitted with a new MSD ignition system, a new clutch and flywheel, a front strut stabilizer bar, dual Duracell AGM batteries, a reconditioned engine fan by Moshagen, and an Elephant Racing oil cooler with a thermostatically controlled fan. Later-model 911SC exhaust manifolds have also been added along with a Dansk sport muffler.  The time of the last engine rebuild is unknown, although the car is said to be accompanied by volumes of service records dating back to the 1970s.  All other routine maintenance items are reported to have been kept up to date.

This sale will include an assortment of tools and spare parts, original owner's manuals, three sets of keys, a full-size spare Fuchs wheel, and a clean title. With its RS-inspired styling and upgraded 2.7L engine, this 911T makes an excellent driver for any air-cooled Porsche enthusiast.