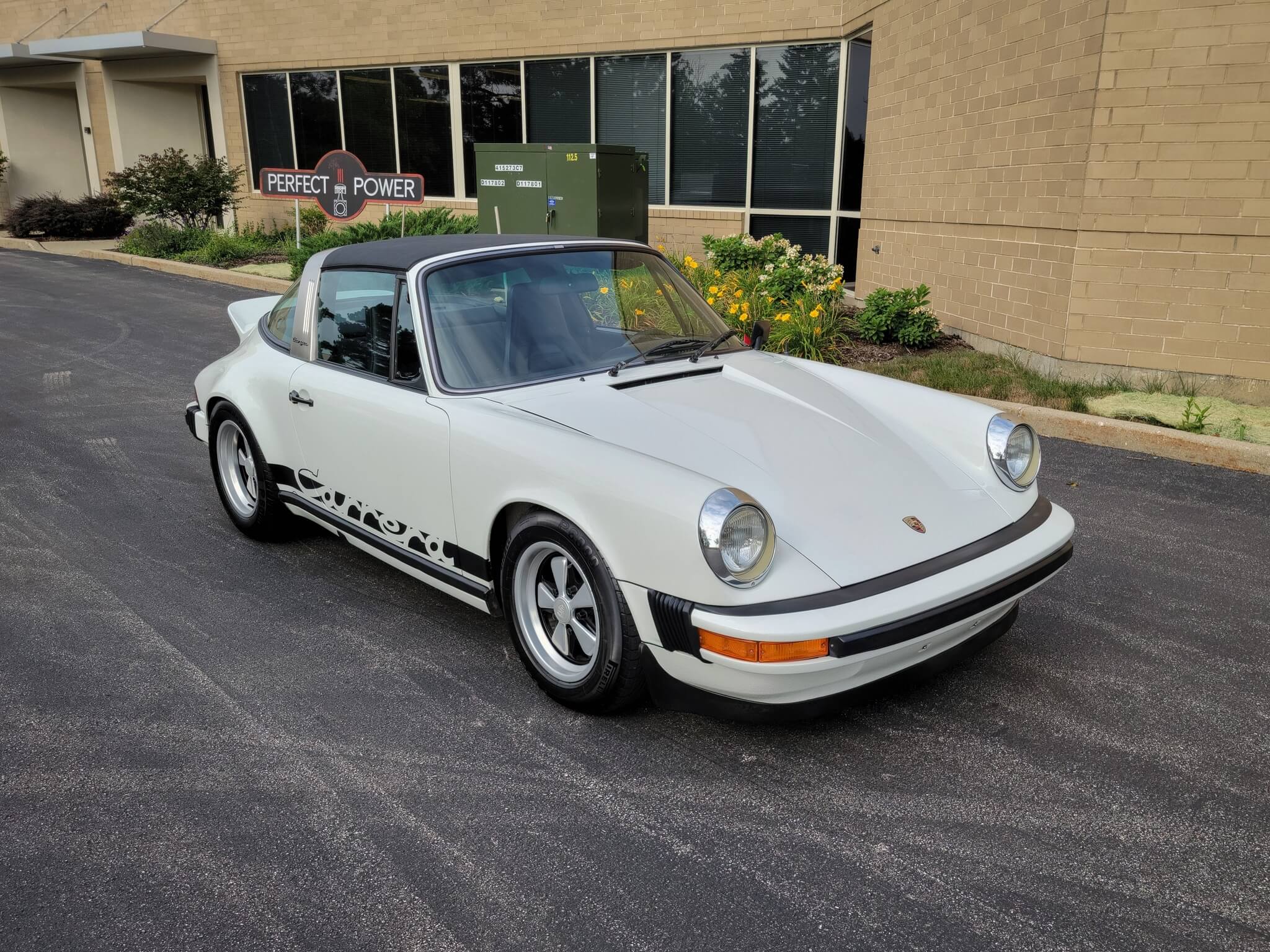 We are pleased to offer this 1974 Porsche 911 Carrera Targa finished in Grand Prix White over a Midnight Blue partial leather interior.  Marking the introduction of the G-Series Porsche 911, this Carrera Targa represents one of only 246 U.S. examples produced for the 1974 model year and has been under the care of its current owner since 1975.  It comes equipped with a fuel-injected flat-six engine, 5-speed manual gearbox, and a factory-optioned ducktail spoiler made legendary by the Carrera RS model of the year prior.  Maintained by the specialists at Perfect Power over the past 30 years, this rare Carrera Targa is now being offered for auction on behalf of its longtime owner out of Illinois. 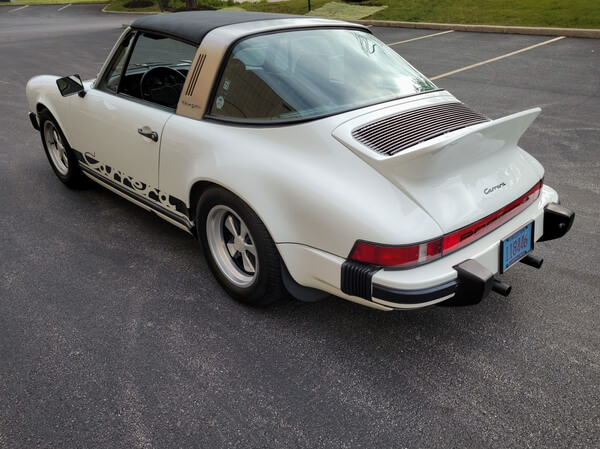 This Targa comes finished in Grand Prix White with black Carrera script graphics along each side.  The car was completely refinished in its original color during the early 1990s and the Targa top was restored in 2009. The paint is described to be in very good condition overall with only a few minor stone chips on the front end and some bubbling around the headlights.  European market bumperettes are equipped along with rear mudflaps. The rear valence has also been modified to accommodate the aftermarket sport muffler tips.  The car came factory equipped with an optional ducktail rear spoiler, chrome headlight bezels, a single driver-side mirror, and 15” Fuchs wheels. It rides on a set of Pirelli P6000 tires dated from 2016/2017 retaining approximately 7/32” tread depth. The original rear valence for the factory single-tipped muffler will accompany the sale. 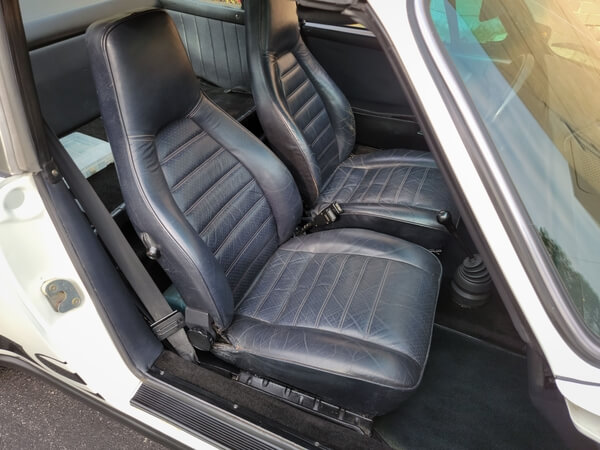 Inside, this 911 sports a Midnight Blue partial leather interior with a vintage Alpine stereo, basic heating and ventilation controls, and manually adjustable seats.  The carpets were replaced in 2019, and the door panels and dashboard are described to be well preserved while the seats exhibit some typical signs of age-related wear.  The original odometer was replaced after it broke at 11,912 miles. The current odometer shows just over 2k miles and has rolled over once, therefore the true mileage of the car is reported to be approximately 114k. A note from the longtime owner is provided in the gallery detailing their custodianship of the car since 1975. 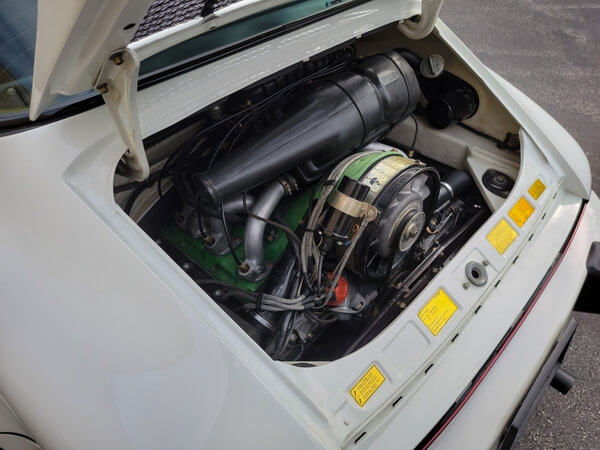 Power comes from an air-cooled 2.7L flat-six engine equipped with Bosch fuel injection.  The rear wheels are driven by way of a 5-speed 915 manual gearbox.  An aftermarket sport muffler has been equipped along with a front strut tower brace.  The car has been routinely serviced by the experts at Perfect Power of Illinois over the past 30 years including an overhaul of the engine approximately 37k miles ago in 1995.  A major service of the fuel injection system was also carried out in 2017 followed by the installation of a new fuel tank earlier in 2021. An invoice for the engine overhaul is provided in the gallery along with images of the case stampings and Porsche Certificate of Authenticity. 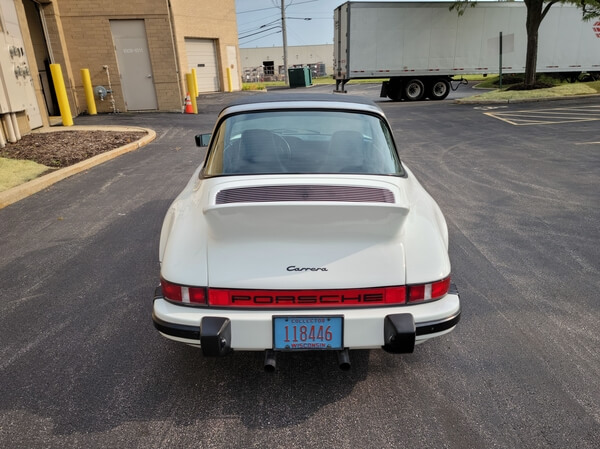 This sale will include a clean title, Porsche Certificate of Authenticity, and an assortment of parts as depicted in the gallery. This rare early G-Series Carrera Targa is just waiting to be cherished and enjoyed by a new caretaker, do not let this opportunity pass you by.