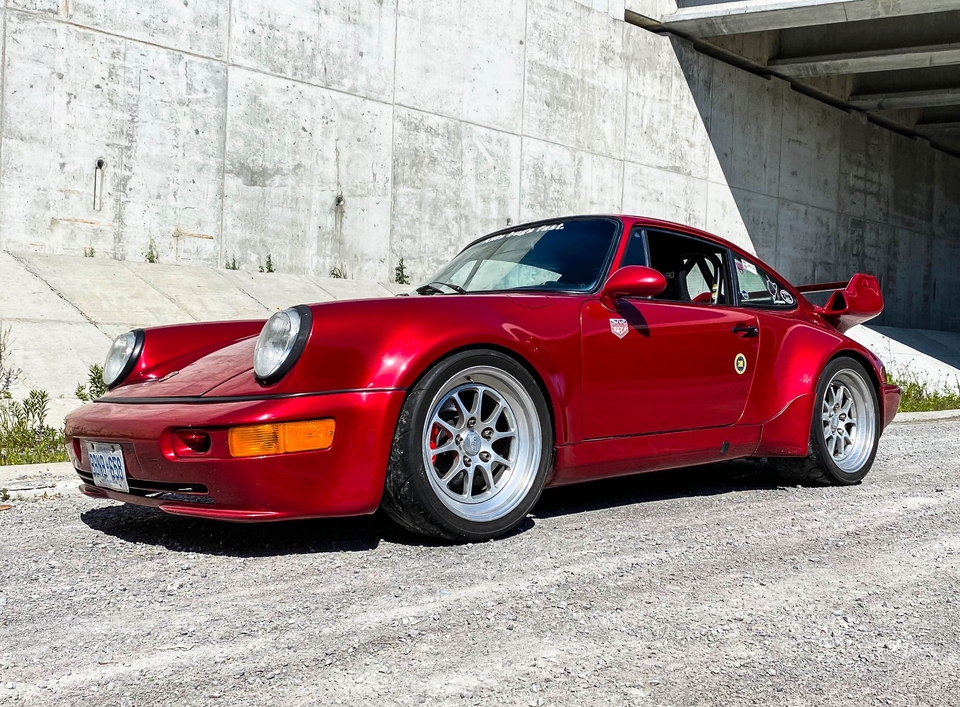 Up for auction is this turbocharged 1975 Porsche 911 Carrera finished in Laser Red Metallic over a custom lightweight interior.  Marking the 29th example built out of only 395 U.S.-spec cars produced for the model year, this 1975 Carrera is said to have been purchased by its previous owner during the mid 1990’s before undergoing extensive customizations and performance upgrades.  Showcasing widened steel fenders, track-oriented modifications and an upgraded 3.3 L turbocharged engine, this Carrera makes the ideal street-legal racecar for any air-cooled Porsche enthusiast.  This remarkable Carrera hot rod is now being offered for auction in great running order showing approximately 154k kilometers or 96k miles on the odometer (TMU). 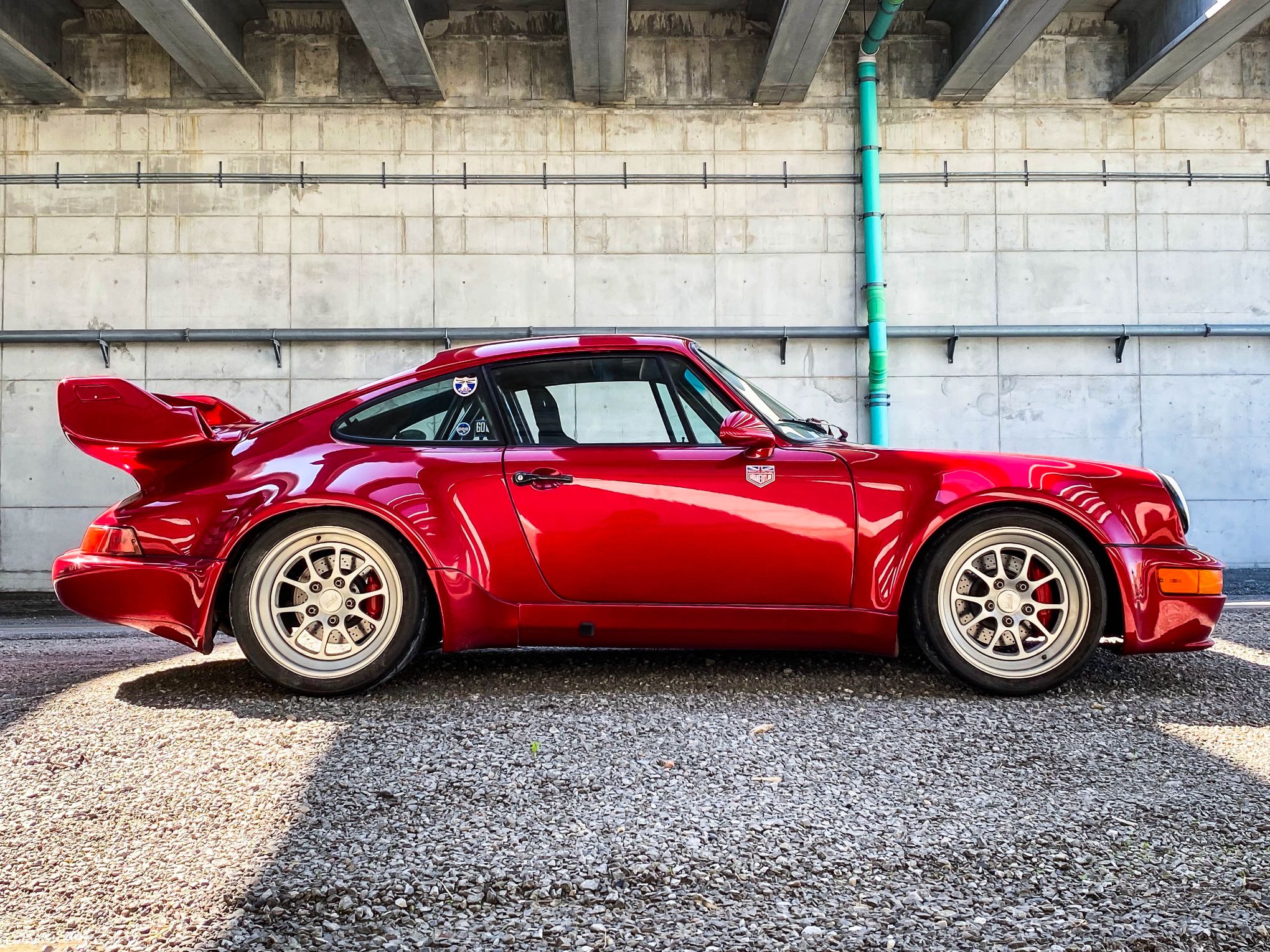 During the mid 1990’s, this factory sunroof-delete Carrera is said to have been stripped down to bare metal and outfitted with widened steel fenders before being completely refinished in Laser Red Metallic.  The paint is noted to be in good overall condition with some typical track-going wear, and the seller states that one of the doors and front fenders had been damaged and replaced at some point during the previous ownership, though there are no noted issues.  Exterior modifications include fiberglass 964-style bumpers and skirts, a GT2-style rear wing and black headlight surrounds.  This Carrera rides on a set of silver aftermarket 18” Fiske alloy wheels which come dressed in older Toyo Proxes R888 tires. 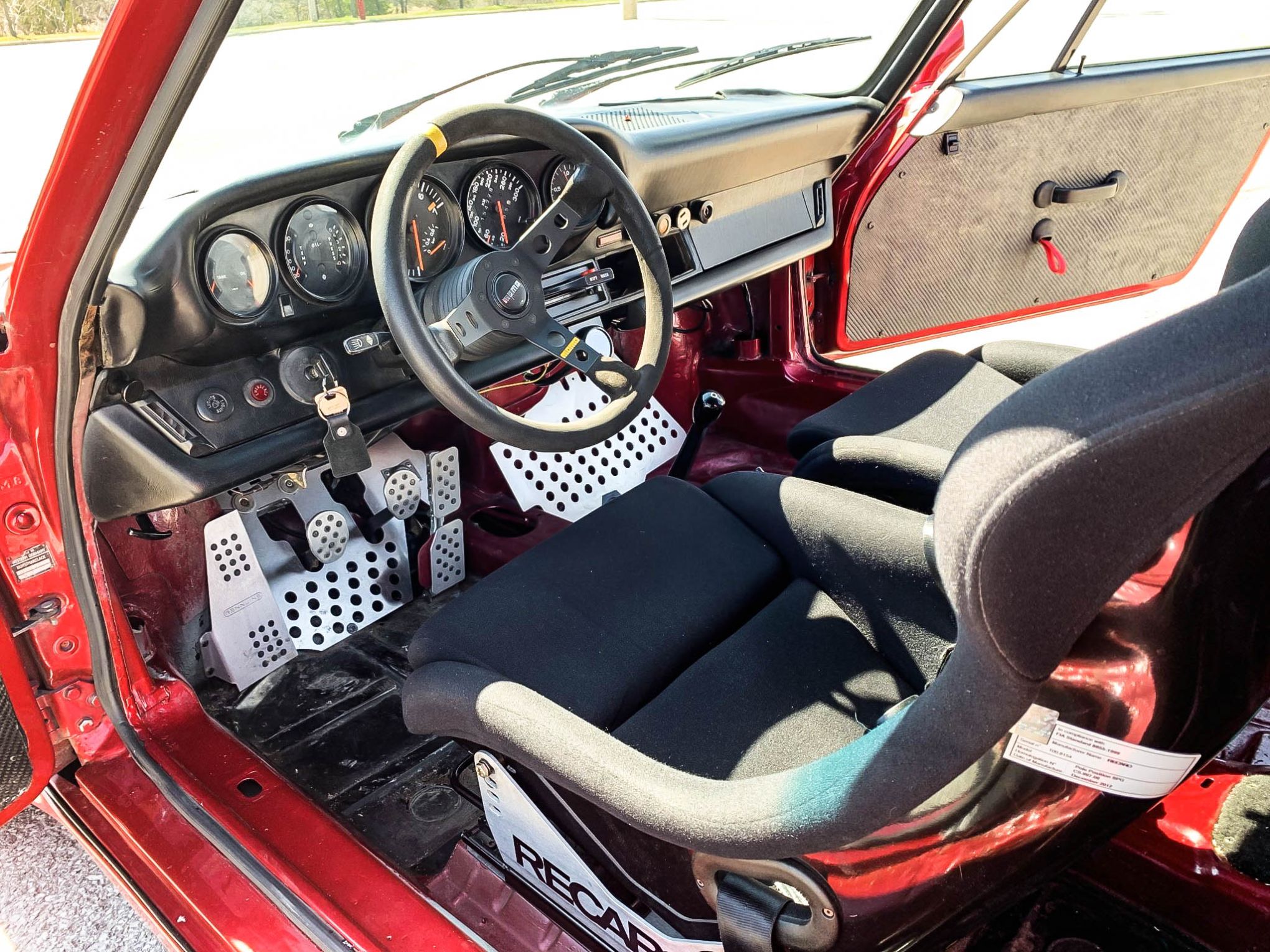 The interior has been stripped out and made race-ready with modifications including Recaro Pole Position racing seats, Schroth 6-point harnesses, a bolt-in roll bar, a WEVO shifter and MOMO steering wheel.  Aluminum pedals and floorboards have also been installed along with custom carbon fiber RS-style door panels.  The dashboard has been recovered although some imperfections can be seen, and the seller confirms all essential gauges and electrical components to be working properly.  As a track-focused vehicle, both the air conditioning and audio systems have been deleted for weight savings. 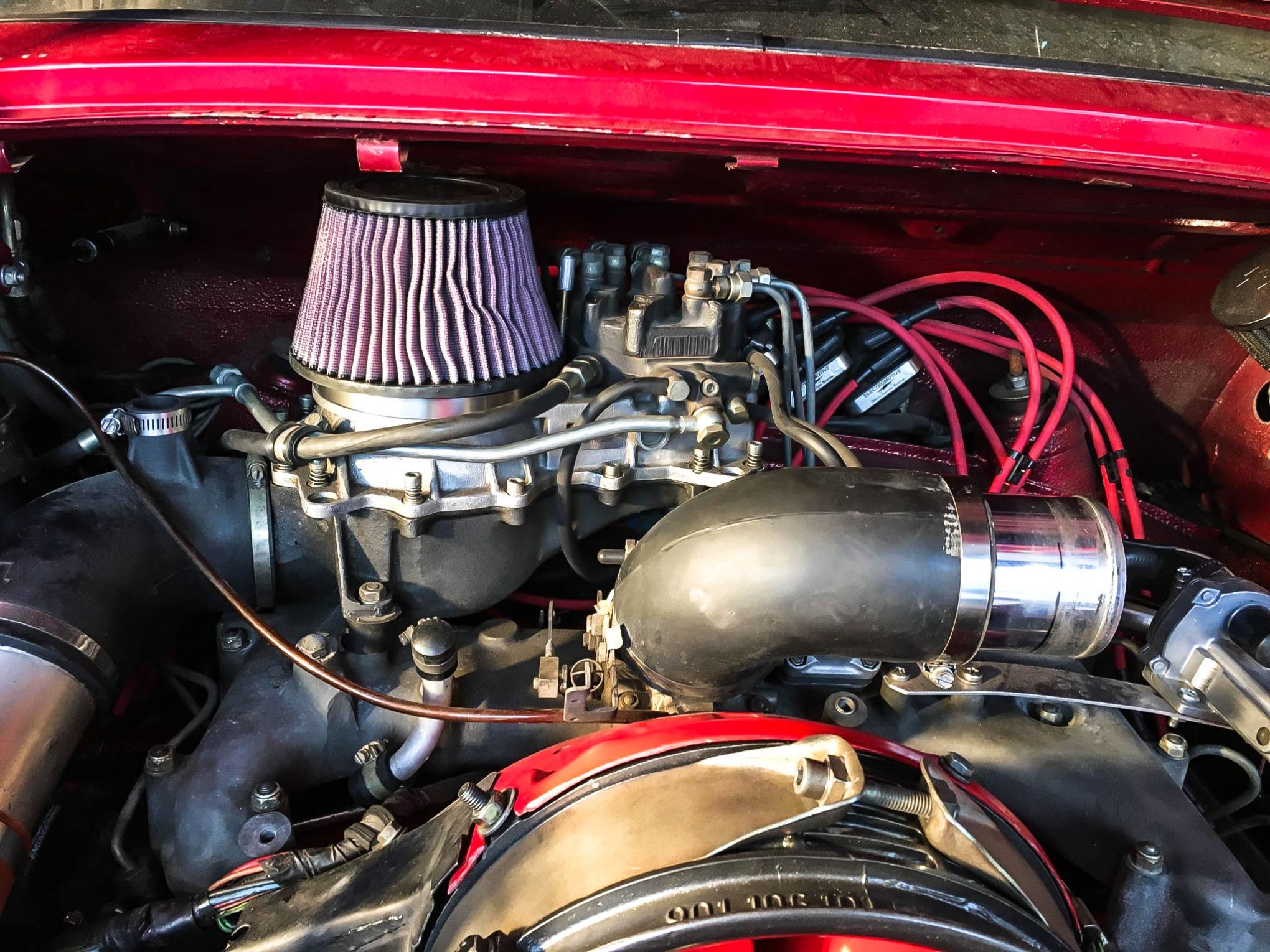 As part of its initial transformation, this Carrera was outfitted with an upgraded 3.3 L turbocharged flat-six engine sourced from a 1989 Porsche 930.  The rear wheels are driven by way of a late-model 915 5-speed manual transmission with a limited slip differential.  The following upgrades have been installed providing for optimized performance and a claimed output of over 350 HP:

The engine retains its CIS fuel injection system and is said to have been fully rebuilt at some point during the early 2000’s.  Reported to have been driven approximately 30k kilometers since this time, this Carrera is said to be in great running order and up to date on all standard maintenance.  An image of the dynamometer report has been provided in the photo gallery. 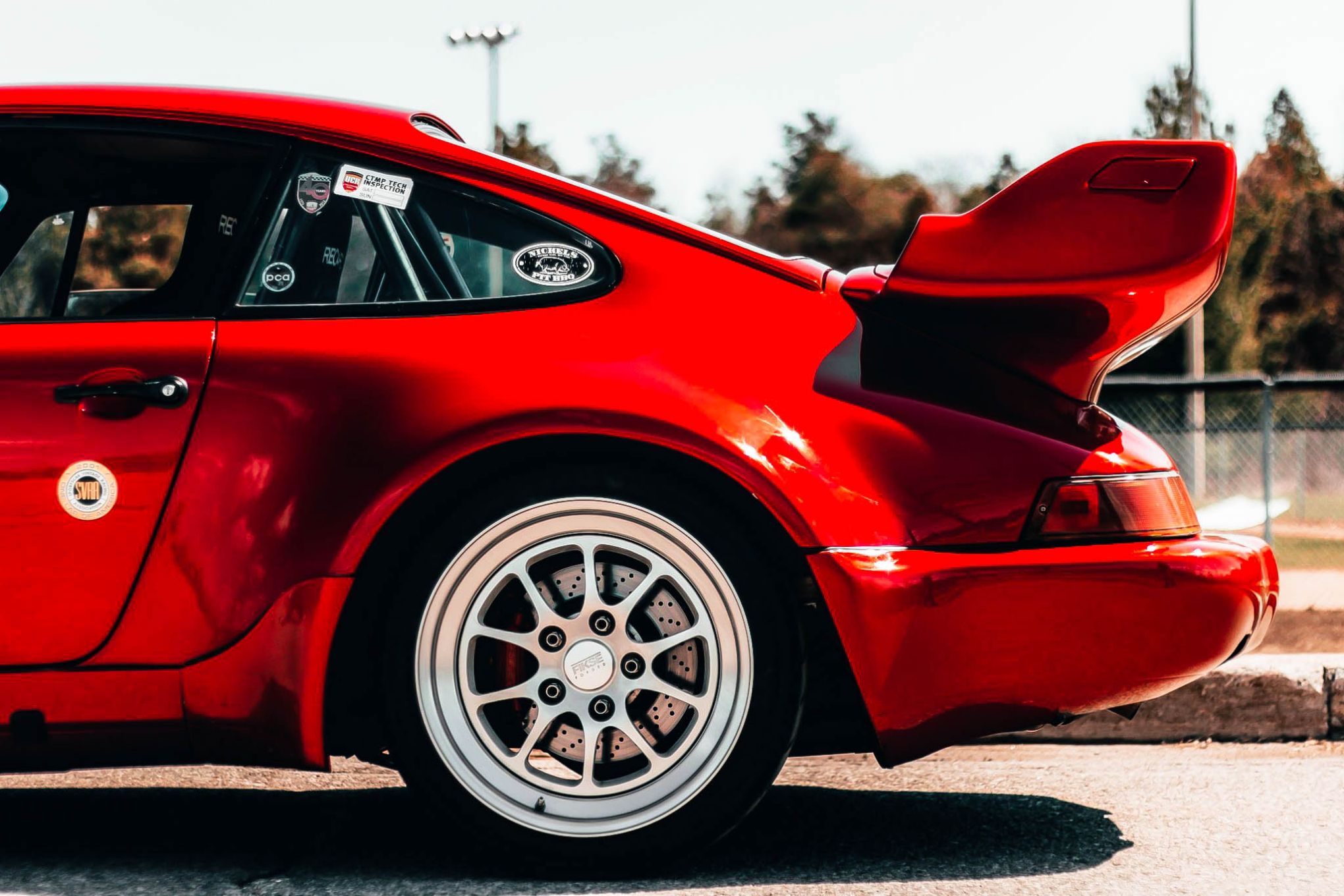 This 911 had been driven from Quebec, Canada to participate in the “One Lap of America” event several times under its previous ownership, and the current owner had used this car for PCA driver-education events since their purchase in 2014.  New track tires are needed, and the safety harnesses are also due for replacement prior to any on-track driving.  The sale of this custom 1975 Carrera will include a set of two keys and a binder full of receipts from the previous owner.  If you’re looking to hit the track in an air-cooled hot rod, this turbocharged 1975 Carrera makes the perfect choice.