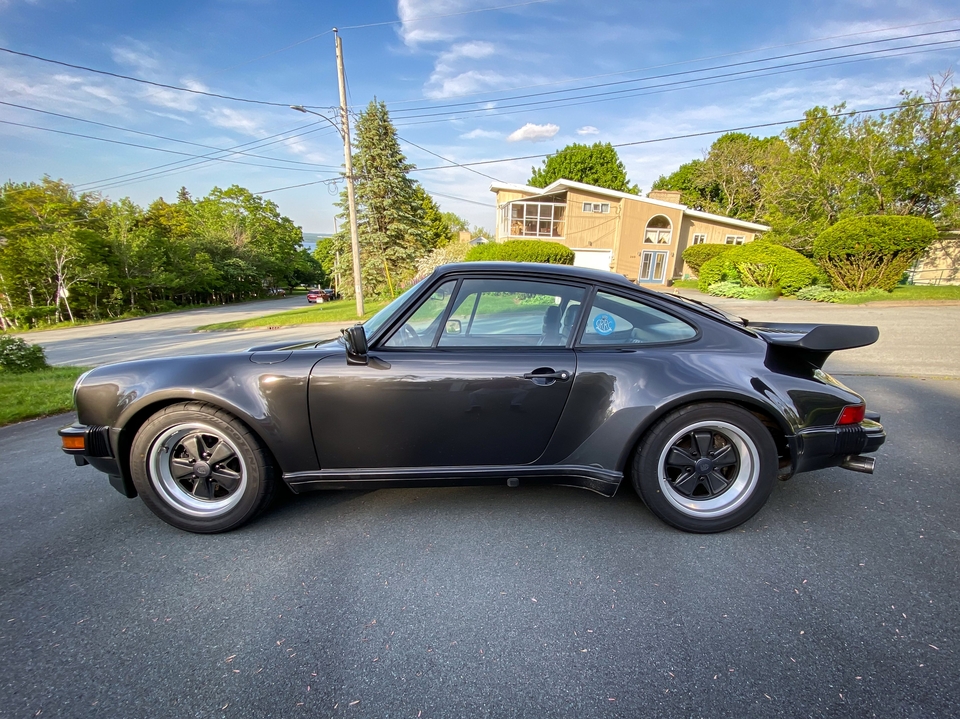 Up for auction is this 1981 Porsche 930 Turbo Coupe finished in Black Metallic over a black leather interior.  One of a reported 63 examples built for the Canadian market in 1981, this Turbo was eventually acquired by its current owner in 1991 from the John Scotti Automotive Group in Montreal.  The car is said to have been garage-kept and regularly driven ever since while never being subjected to track use. A top-end engine rebuild was carried out in 2017 and the transmission was also fully rebuilt in 2019.  Showing just over 122k kilometers (76k miles) on the odometer while highlighting a desirable RoW-spec engine and optional limited-slip differential, this rare Canadian-market Turbo is now being offered for auction by its longtime owner out of Nova Scotia. 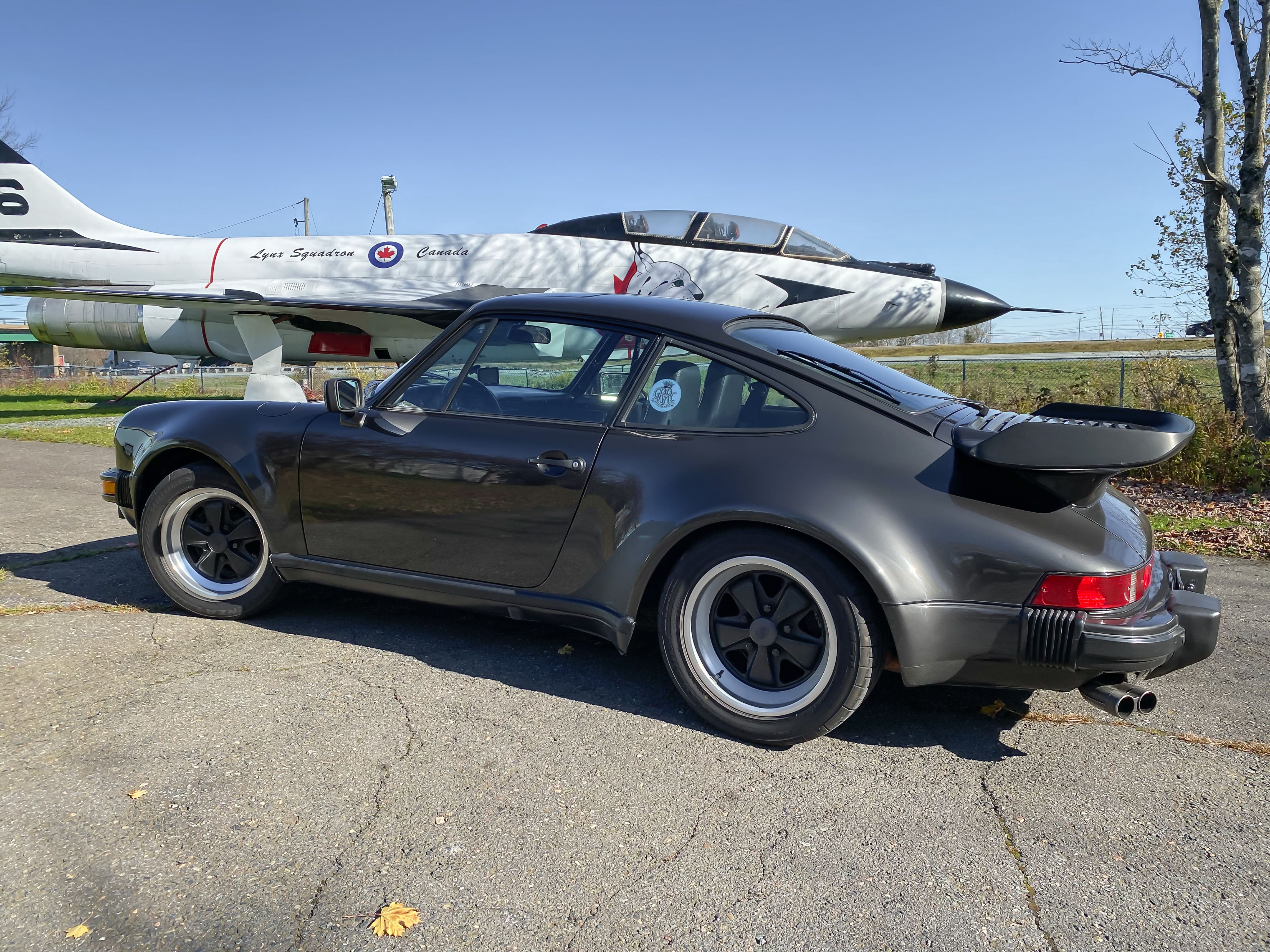 This 930 is finished in Black Metallic (708), although the certificate of authenticity refers to the color as “Mocha Black”.  Some small stone chips are noted throughout the exterior as well as a slight dimple on the left rear fender.  A previous owner is said to have applied a clear coat over the hood, additional images are provided in the photo gallery along with a clean CARFAX report.  Some notable features include front fog lights, a lower front air dam, wide fenders, and a distinctive Tea Tray rear spoiler.  This Turbo rides on factory 16” Fuchs wheels measuring 7” wide in front and 8” wide in the rear, and are dressed in an older set of Bridgestone Potenza RE-11 tires. 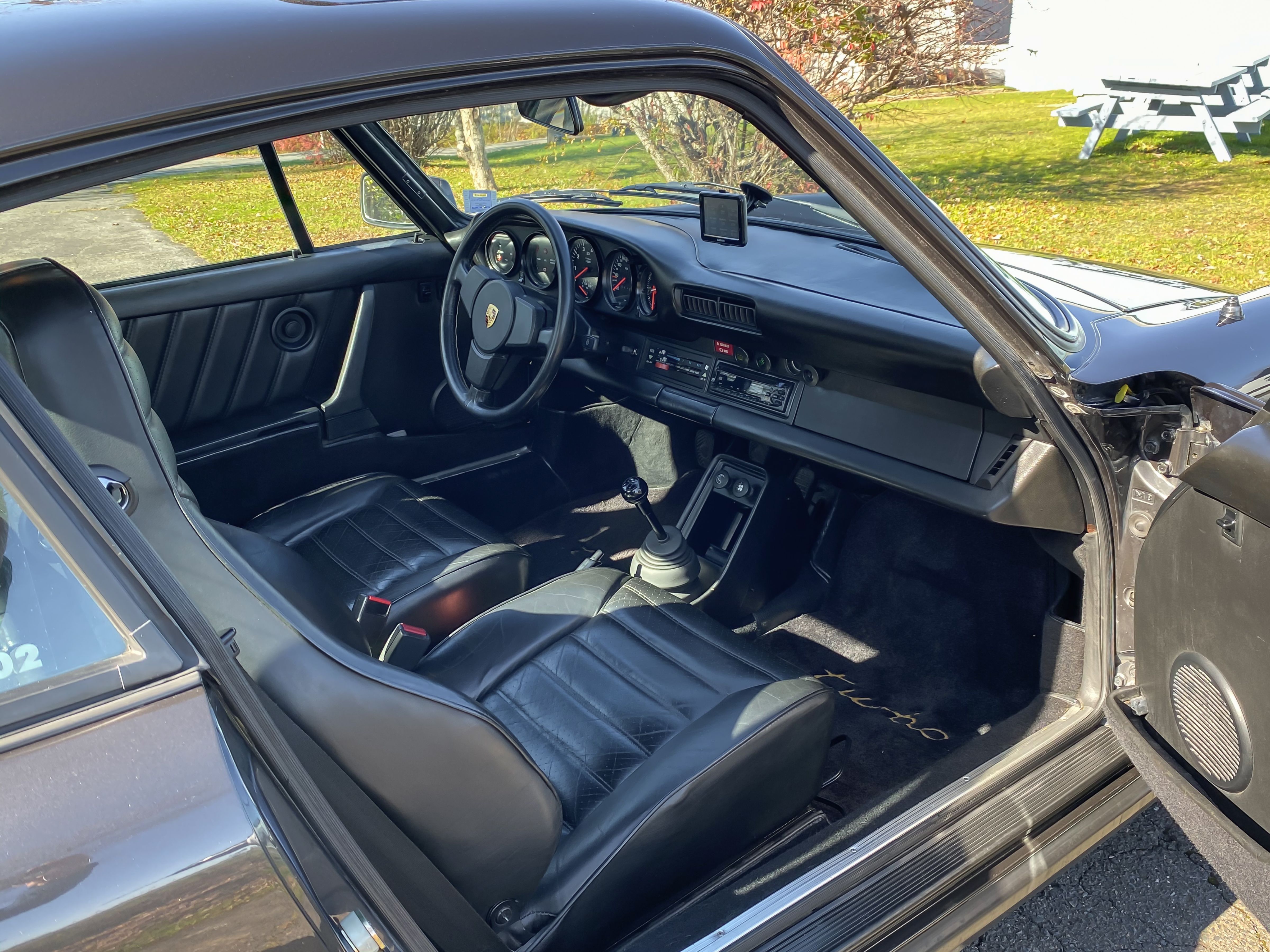 Inside, this Turbo sports a black leather interior with an optional black headliner, alarm system, passenger-side electric mirror, and an electric sunroof.  A Porsche crest has been added to the center of the steering wheel and an aftermarket radio has been installed, although the original Blaupunkt radio will also be included in the sale. A small wear spot is noted on the driver's seat piping as well as a scuff near the shift boot.  The A/C is currently nonfunctional as the compressor has been removed, and all other systems are said to be fully functional.  The odometer is reported to have been previously repaired and there was reportedly no mileage added during the interim. 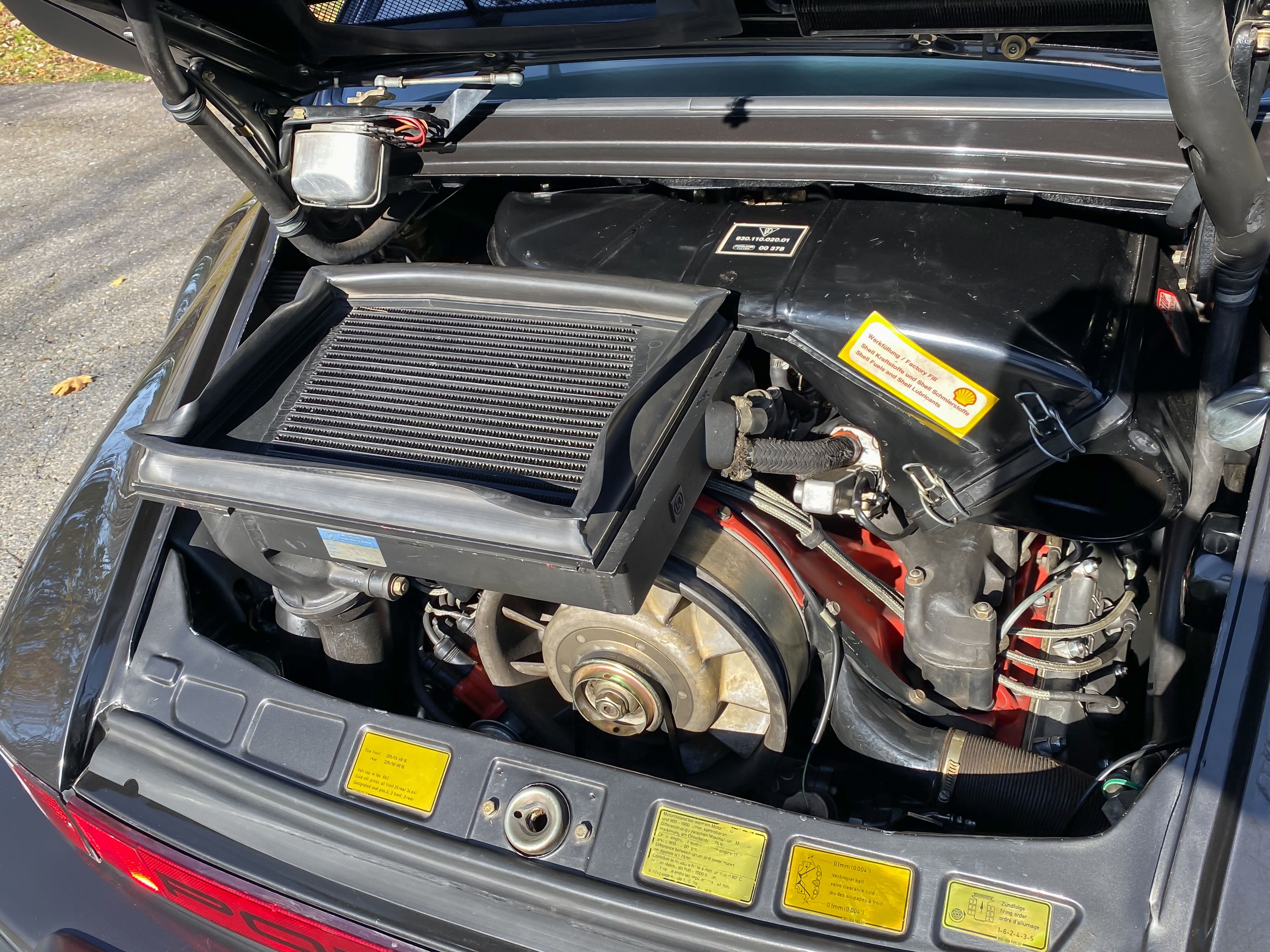 This 930 carries an RoW-spec 3.3L turbocharged flat-six engine rated at 300 HP stock, compared with its 282 HP U.S.-spec counterpart.  The rear wheels are driven through a 4-speed manual transmission with a factory-optioned limited-slip differential.  An upgraded TiAL 46mm wastegate has been installed and set to stock pressure. Upgraded stainless steel brake lines have also been equipped as well as oil-fed chain tensioners and a diaphragm clutch. A top-end engine rebuild is said to have been carried out in 2017 following head stud failure, and all the head studs were subsequently replaced during this time along with the alternator, exhaust valve guides, rings, seals, chains, guides, and hoses.  The transmission was rebuilt in 2019 and the clutch is reported to have plenty of life left.  The seller reports the drivetrain to be numbers matching, images of the underside and engine stamping are provided in the photo gallery. The muffler is recommended for replacement and a new aftermarket free-flow muffler will be included in the sale. 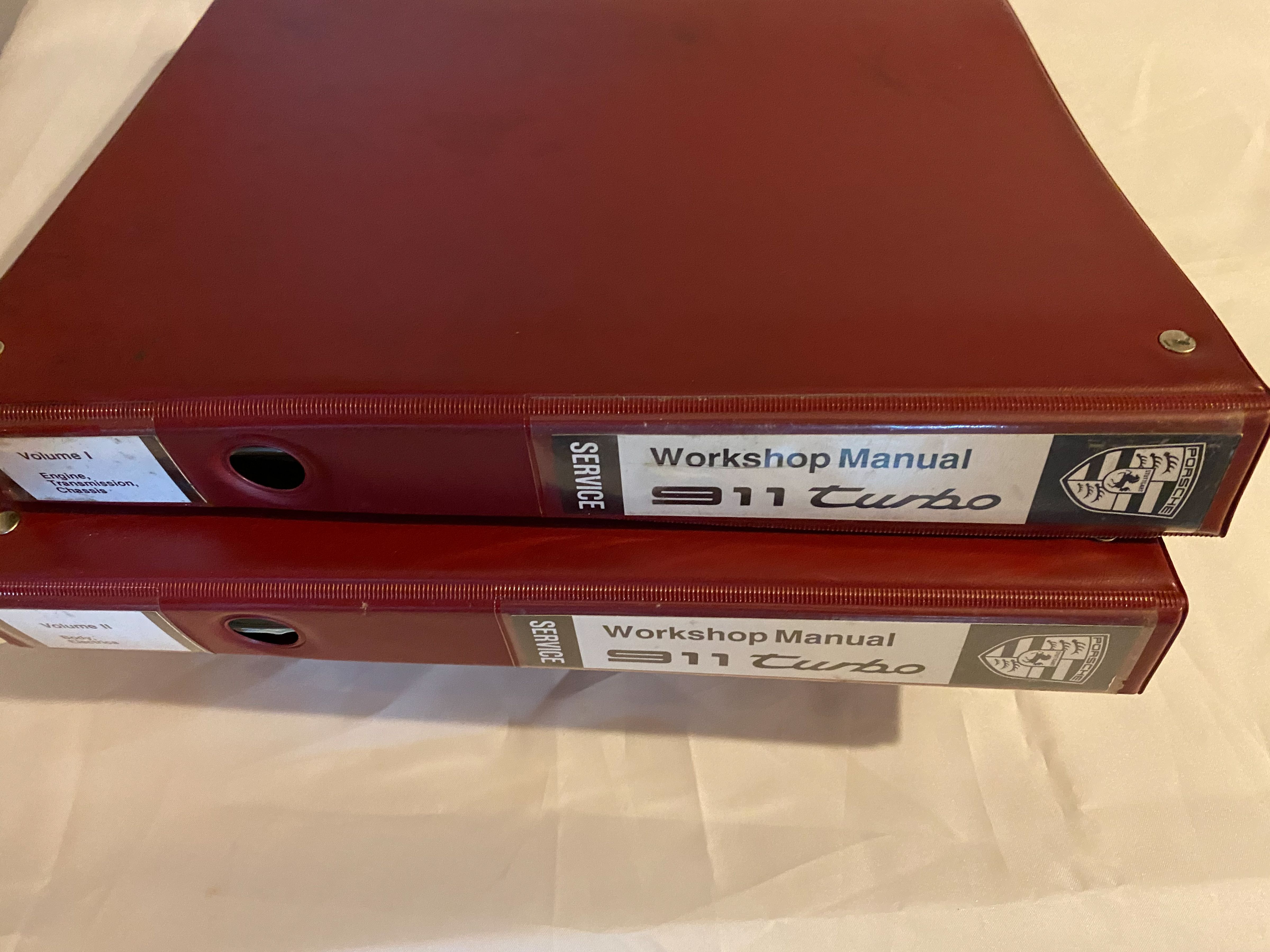 This sale will include a set of multiple keys, a spare tire, toolkit, workshop manuals, the original Blaupunkt radio, a Porsche Certificate of Authenticity, a new muffler, and a clean title.  This rare Canadian-market 930 Turbo is ready to be enjoyed by a new caretaker, do not miss out.