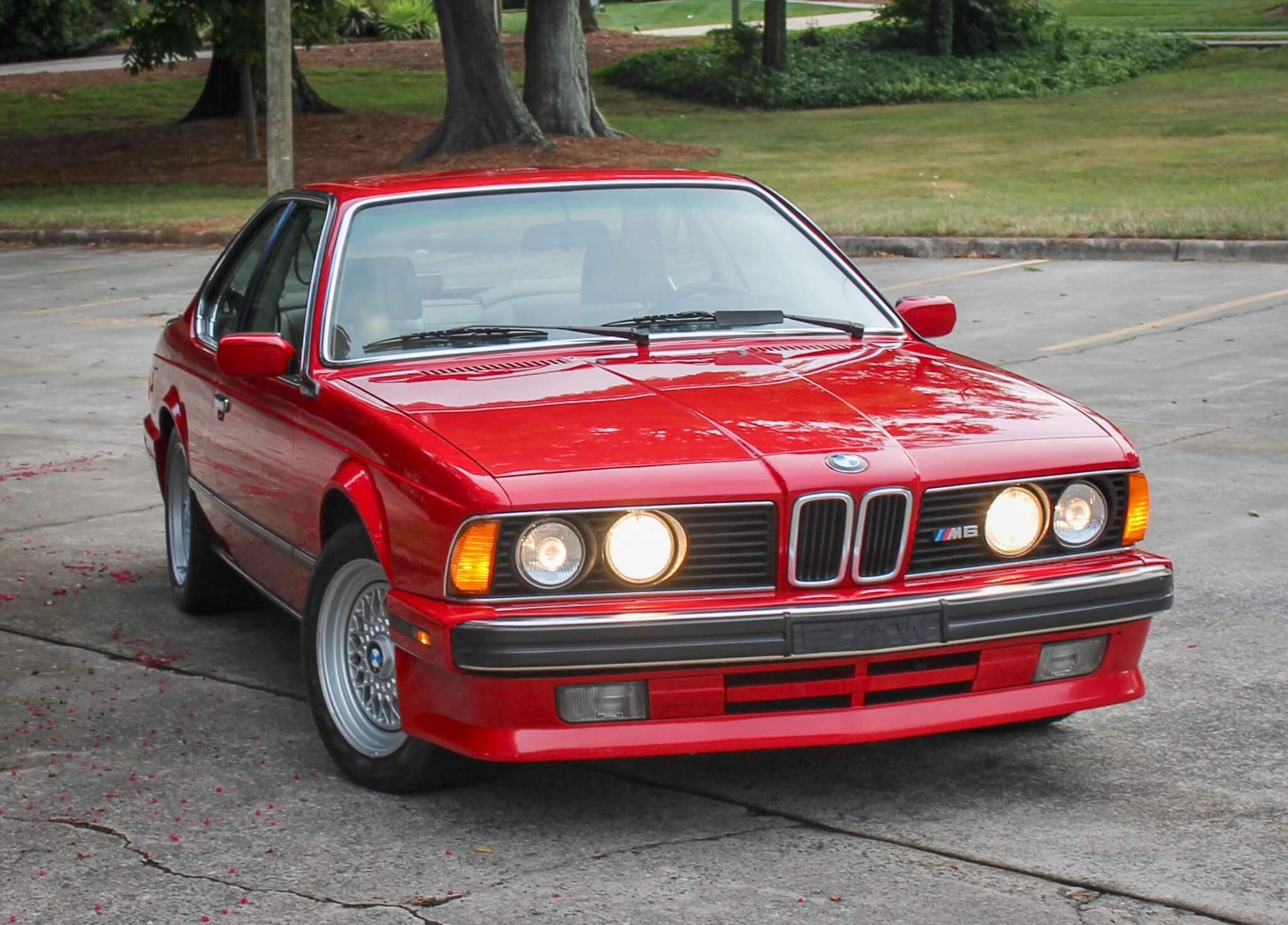 We are pleased to offer this 1988 BMW E24 M6 finished in Cinnabar Red over a Natur Nappa leather interior. The E24 was BMW’s original 6-series grand touring car, with the M6 version carrying an S38 inline-six engine derived from the legendary BMW M1 race car. Of the 5,855 examples built in total, only 1,767 were imported to North America. Reportedly acquired by the seller from its second owner in 2014, this M6 has been well preserved, diligently maintained, and tastefully modified with a few high-quality performance upgrades. Now showing just over 71k miles on the odometer, this M6 is being offered for auction by its owner out of North Carolina. 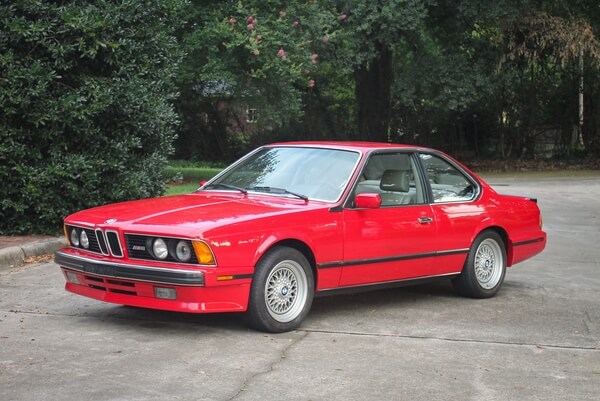 This M6 is finished in Cinnabar Red (138) and features M-badging on the grille and trunk lid, a black rear spoiler, and chrome window moldings.  The paint is described to have been kept mostly original and very well preserved throughout the years. A full ceramic coating has been applied within the last 200 miles and detailed images are provided in the gallery along with paint meter readings and a clean CARFAX report.  The driver’s side lower front spoiler is said to have been refinished by the previous owner, and the semi-flat black area between the rear lights has been refinished during the current ownership along with the rear spoiler.  A few imperfections are noted including minor dings on the lower body. This M6 retains its factory BBS 16” cross-spoke metric wheels which were refinished in 2018.  These wheels come mounted with period-correct Michelin TRX tires showing date codes from 2003. 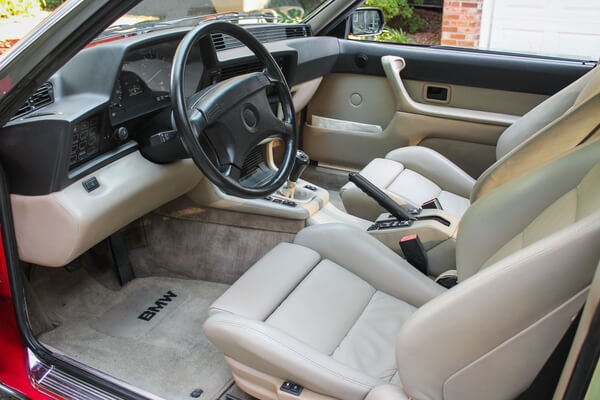 Inside, the Natur (0200) Nappa leather interior is described to be in very good original with only minor wear noted on the driver’s seat bolster. The “halfline” leather upholstery includes hand-stitched Nappa leather on the seats, door panels, center console, glove box door, headliner, sun visors, door pillars, upper door trim, and dashboard. Standard features include power seats with driver’s memory, air conditioning, a cassette deck, and a power sunroof. Factory options included rear air conditioning with a beverage cooler. An aftermarket JVC CD changer has been installed in the trunk, although the seller reports it has not been used in many years. All other gauges and accessories are said to be working properly. 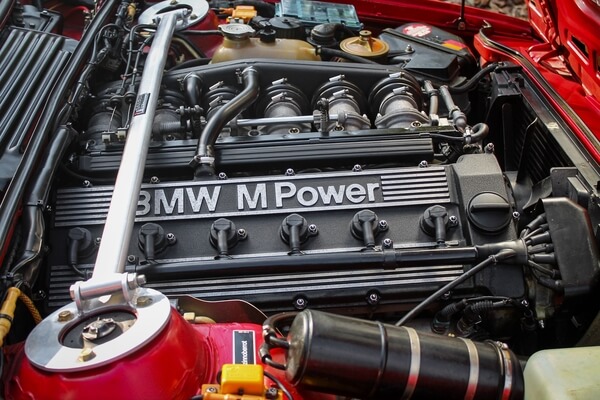 The E24 M6 is powered by an S38 3.5L 24-valve inline-six engine producing up to 256 HP at 6500 RPM from the factory. Power is delivered to the rear wheels through a 5-speed manual transmission, allowing the M6 to accelerate from 0-60 MPH in under 7 seconds while reaching a top speed of nearly 160 MPH. Compared with the standard 6-series of the time, the M6 received larger brakes and anti-roll bars as part of its BMW Motorsport treatment. Additionally, this M6 has been upgraded by the previous owner with a Bavarian Autosport strut tower brace, Dinan tuning software, stainless steel brake lines, and a 3A stainless steel exhaust system, which replaced the catalytic converter. During the current ownership, the seller has replaced most of the front-end suspension components, converted the air conditioning to R134, and replaced the rear shock accumulators for the self-leveling suspension. The seller has recently replaced the A/C compressor, fan clutch, and rebuilt both front brake calipers. Some invoices are provided in the gallery along with dyno readings and images of the undercarriage. The car is available for pre-purchase inspection at Automotive International in Charlotte, North Carolina. 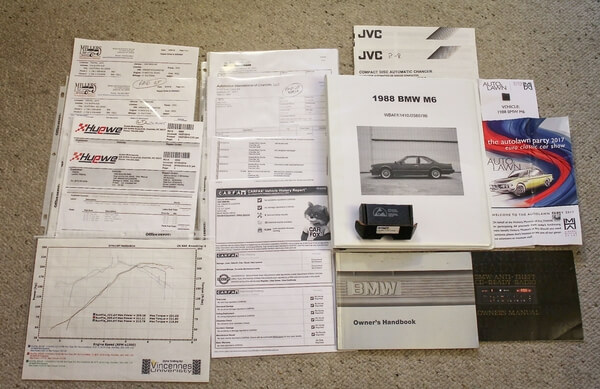 This sale will include a factory toolkit, spare tire, service records, and a clean title. One of the most iconic and sought-after BMWs to wear the M badge, this E24 M6 would make an excellent addition to any classic European car collection.