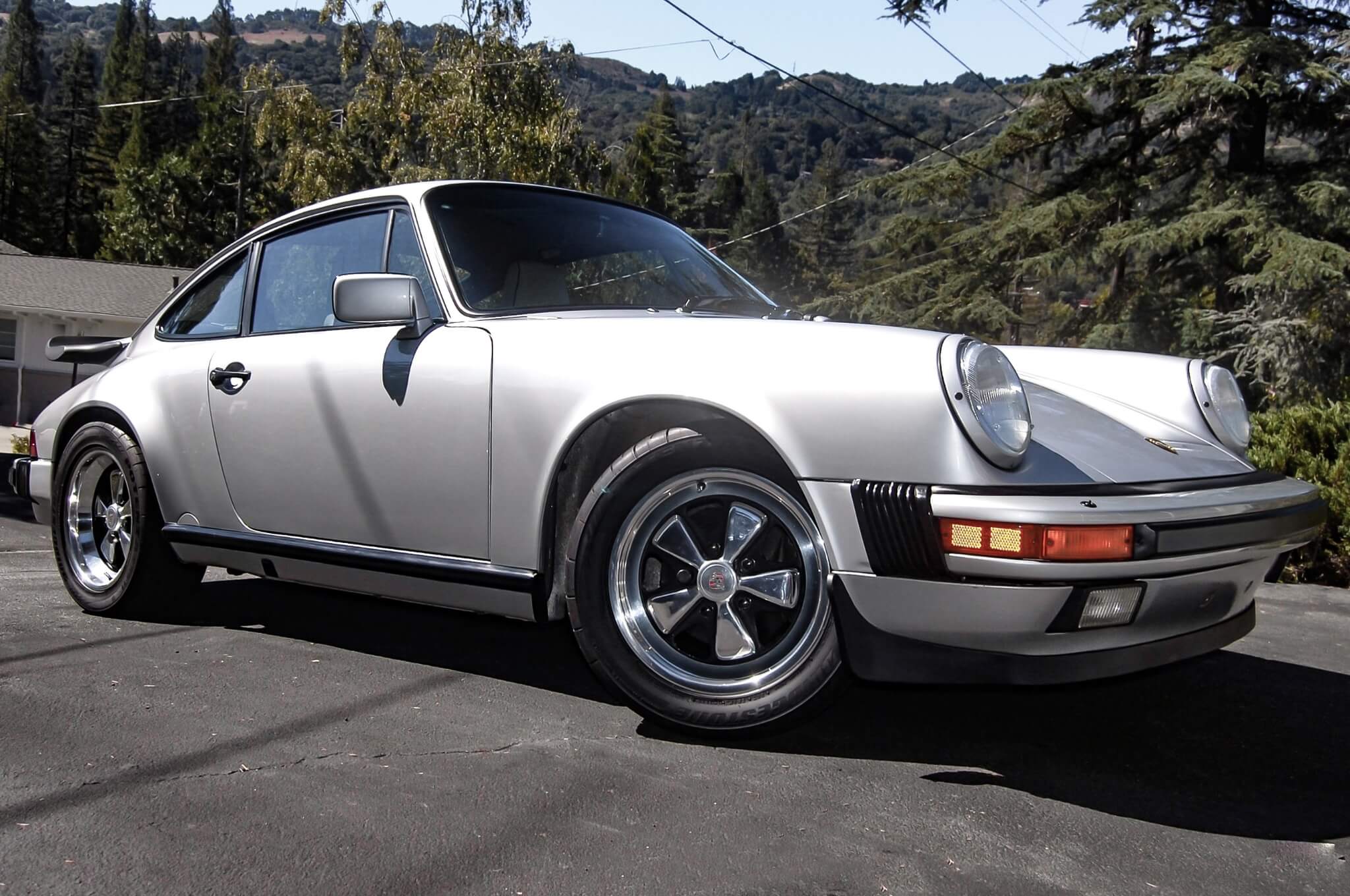 We are pleased to offer this exceptional 1989 Porsche 911 Carrera 25th Anniversary Edition.  Built as part of a limited series of 300 examples to commemorate the 25th anniversary of the Porsche 911 as well as the final production year for the 3.2L Carrera, this special edition 911 showcases factory front and rear spoilers, Fuchs wheels, a G50 5-speed manual gearbox, and a specially appointed Silk Grey supple leather interior.  This example is said to have spent its life on the West Coast car up until 2018 when it was purchased by its seller in New Jersey.  Featuring an upgraded Fabspeed exhaust system as well as a performance air filter and engine chip, this highly sought after 25th Anniversary Carrera is now being offered with approximately 83k miles on the odometer. 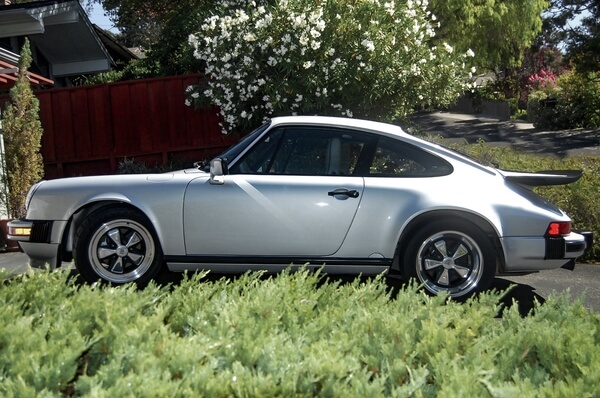 The signature Silver Metallic finish on this special edition Carrera is said to be in excellent overall condition except for a small blemish on the front hood (detailed images are provided in the photo gallery).  Ceramic coating has been applied over the full exterior and the seller reports some higher meter readings from where the driver’s side front fender meets the windshield cowl.  Unique factory features of the 25th Anniversary Carrera include a front spoiler, a Whale Tail rear decklid, and silver-finished 16” Fuchs, which on this example have been customized with a polished finish.  Bridgestone Potenza RE11 tires are currently installed with excellent tread remaining according to the seller’s depth meter. 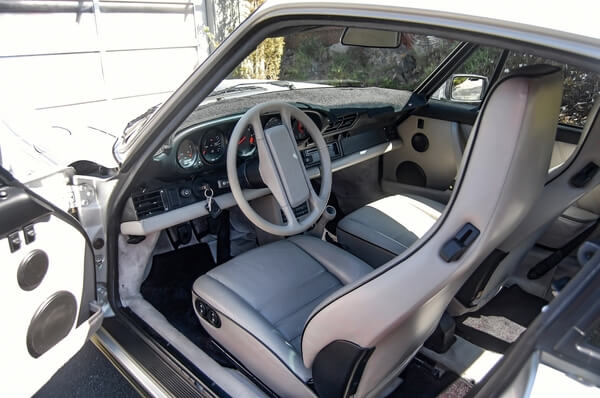 Inside, this 911 is notable for its specially appointed Silk Grey leather interior that features a 25th Anniversary Edition plaque, a shortened gear shift lever, and a unique leather-wrapped center console with cassette  storage and an outside temperature gauge. A small imperfection is indicated on the piping of the driver’s seat and the dashboard heater control cable is recommended for replacement.  An aftermarket Kenwood radio has been installed along with upgraded speakers, and all gauges and accessories are said to be fully functional. 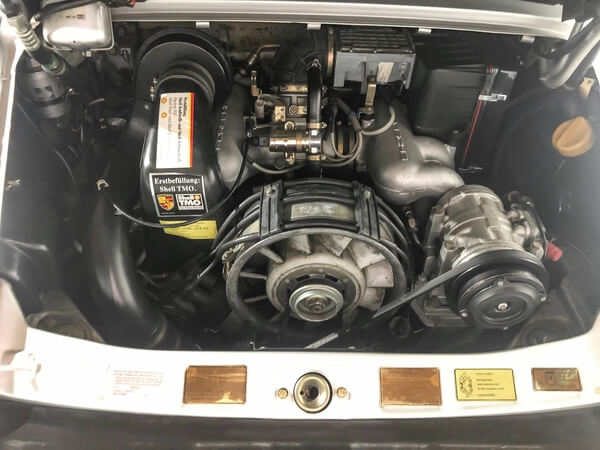 The air-cooled 3.2 L flat-six engine in this Carrera is paired with a highly desirable 5-speed G50 manual gearbox that sends 217 HP stock to the rear wheels.  The performance of this example has been upgraded with modifications including a Fabspeed RSR header/muffler kit with heat exchangers and competition muffler outlets, K&N air filters, a factory oil line update kit, and a Steve Wong performance chip.  The exhaust has been ceramic coated, and the original engine chip is included in the sale along with the stock air filter.  A complete collection of service records will also be provided as well as a stamped Porsche maintenance book dating back from 1989. 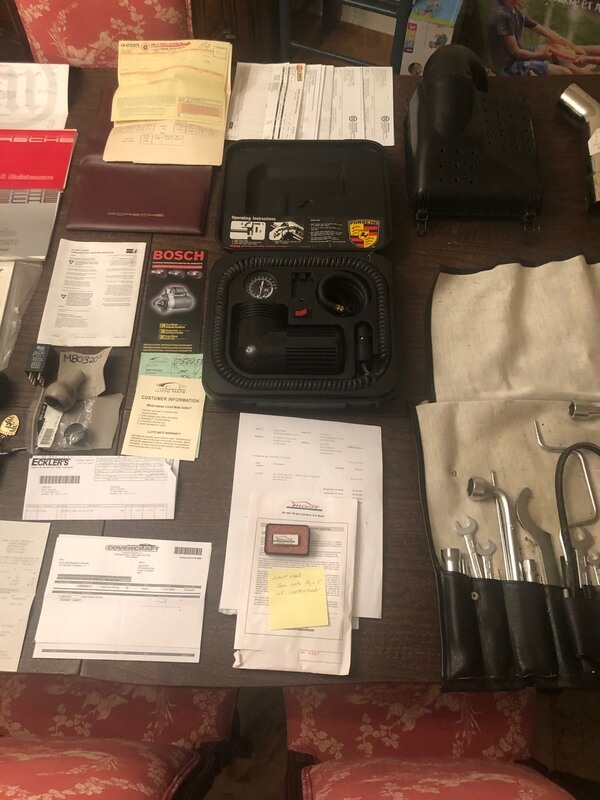 This sale will include a set of 2 keys, original books and tools, service records, a spare tire, air compressor, factory parts, and a clean title.  Do not miss out on this rare opportunity to own one of the more desirable and quickly appreciating air-cooled cars on the market.