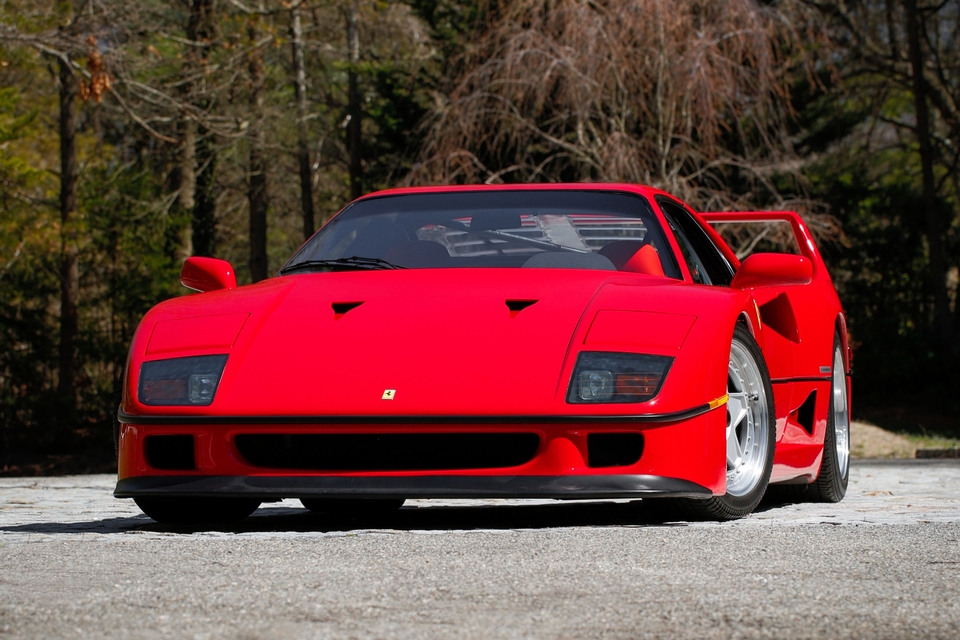 It is our pleasure to present this exceptional U.S. market 1991 Ferrari F40. Perhaps the most iconic and legendary supercar of all time, the Ferrari F40 was unveiled in 1987 to celebrate the marque’s 40th anniversary and quickly took the automotive world by storm with its striking styling, cutting-edge composite materials, advanced aerodynamics, and twin-turbocharged V8 engine which provided a top speed in excess of 200 MPH. It was the last Ferrari automobile to have been influenced and personally approved by Enzo Ferrari. Representing one of only 213 F40s reported to have been delivered to the U.S., this 1991 example is accompanied by a Ferrari Classiche certification, extensive records, and a collection of original accessories. Easily one of the finest examples available, this highly original F40 is now being offered for auction by its owner out of New York with a mere 2,900 miles currently showing on the odometer. 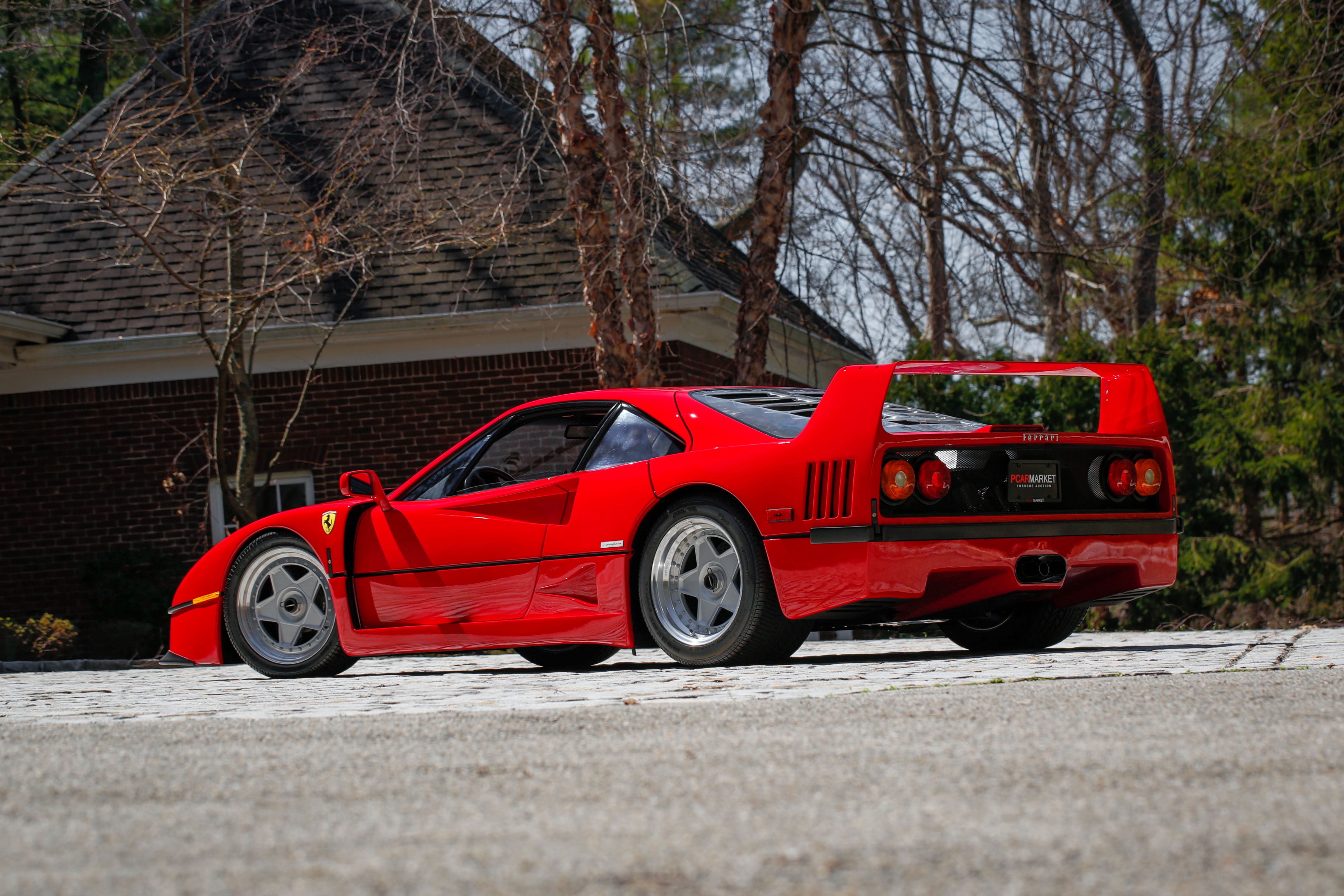 The body of the F40 was designed by Pininfarina and constructed from lightweight carbon fiber, Kevlar, and aluminum. The distinctive shape is the result of tireless wind-tunnel aerodynamic testing. This example wears its factory-applied Rosso Corsa paint which remains in outstanding condition, detailed images are provided in the photo gallery.  Some notable features include pop-up headlights, Scuderia shields, and lightweight polycarbonate windows. In the front, this U.S. market example can be distinguished by its rubber front bumper strips and side markers just ahead of the front wheel arches. In the rear, it can be differentiated by the absence of fog lights and its high-mounted third brake light. This F40 rides on factory Speedline alloy wheels that were recently dressed in new Pirelli P Zero tires. 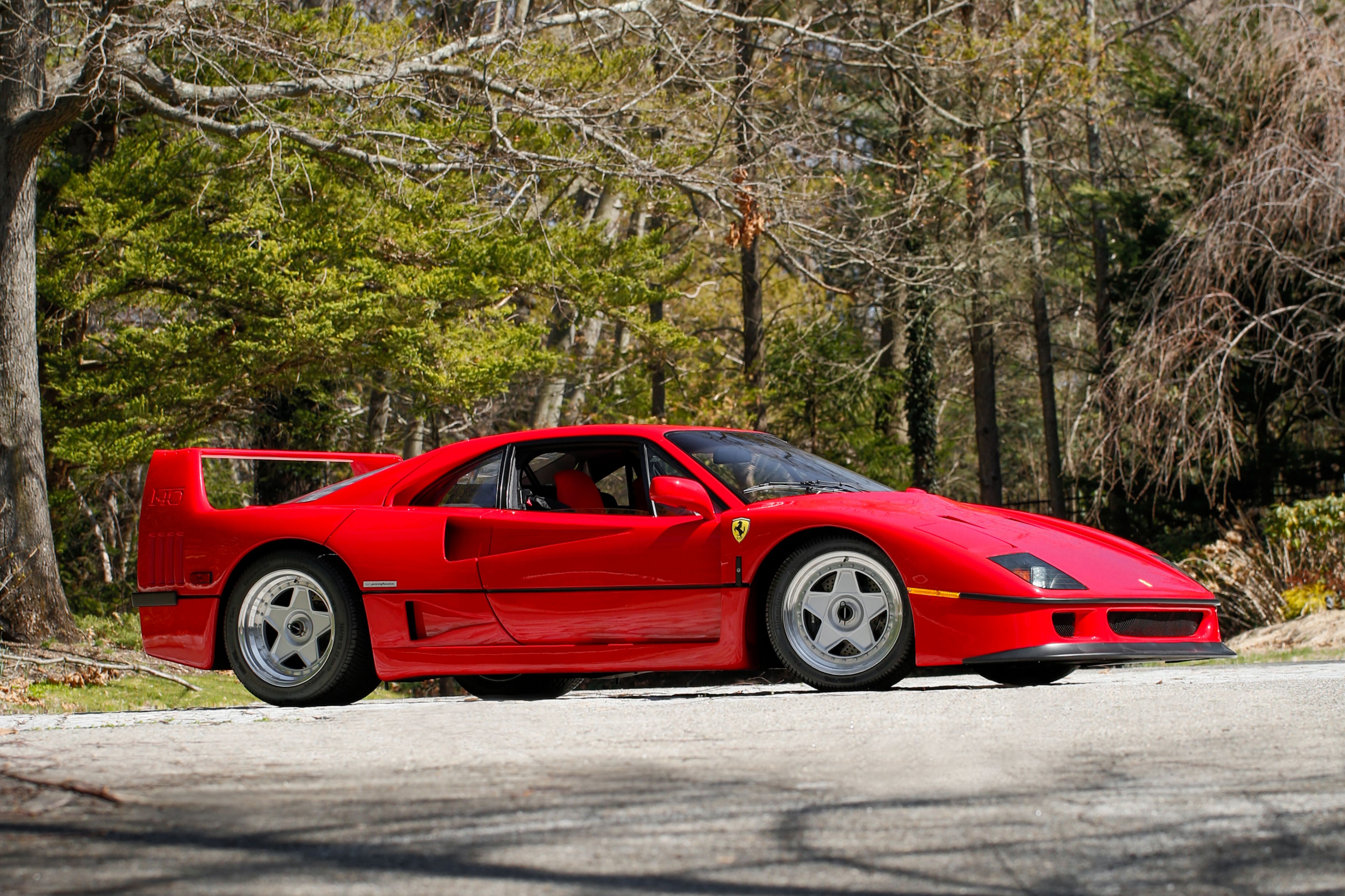 Built with a sole focus on performance, the F40 was appointed with a simplistic lightweight interior devoid of a sound system, power windows, carpeting, leather trim, or door panels. The cabin features a newly replaced headliner, original red Stoffa Vigogna racing seats, analog instrument dials, a 5-speed gated manual shifter, and automated safety belts as was mandated on U.S. vehicles at the time. The driver is supplied with roll-up windows, a 3-spoke leatherbound steering wheel, and a basic air conditioning system. 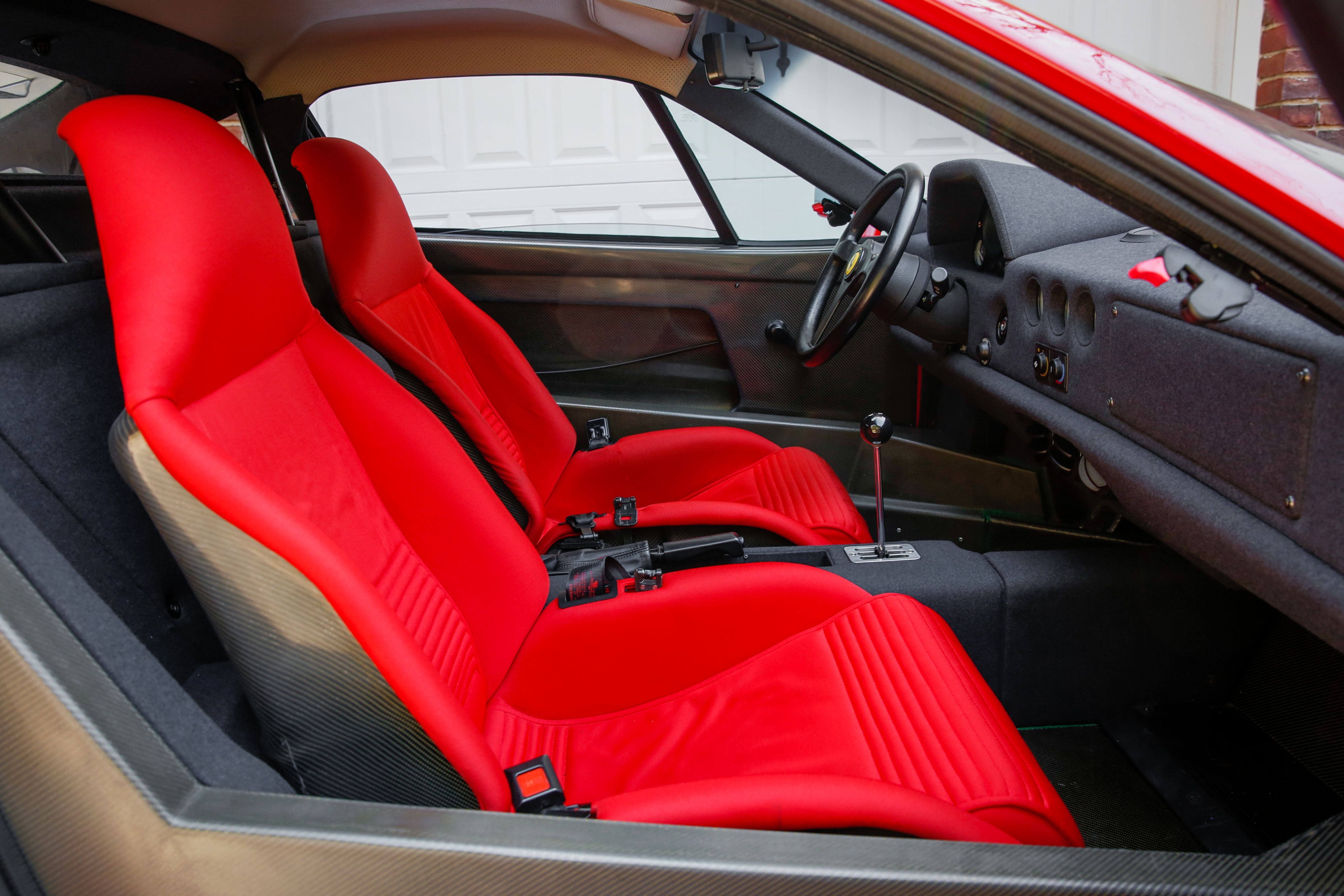 The F40 is equipped with a high-revving version of the engine offered in the preceding 288 GTO model. This mid-mounted four-cam 3.0L V8 engine features twin IHI turbochargers and supplies up to 477 HP at the rear wheels. Compared with the European-spec F120A engine, U.S market versions boast a slight increase in horsepower as a result of revised engine timing to accommodate the mandatory catalytic converters. 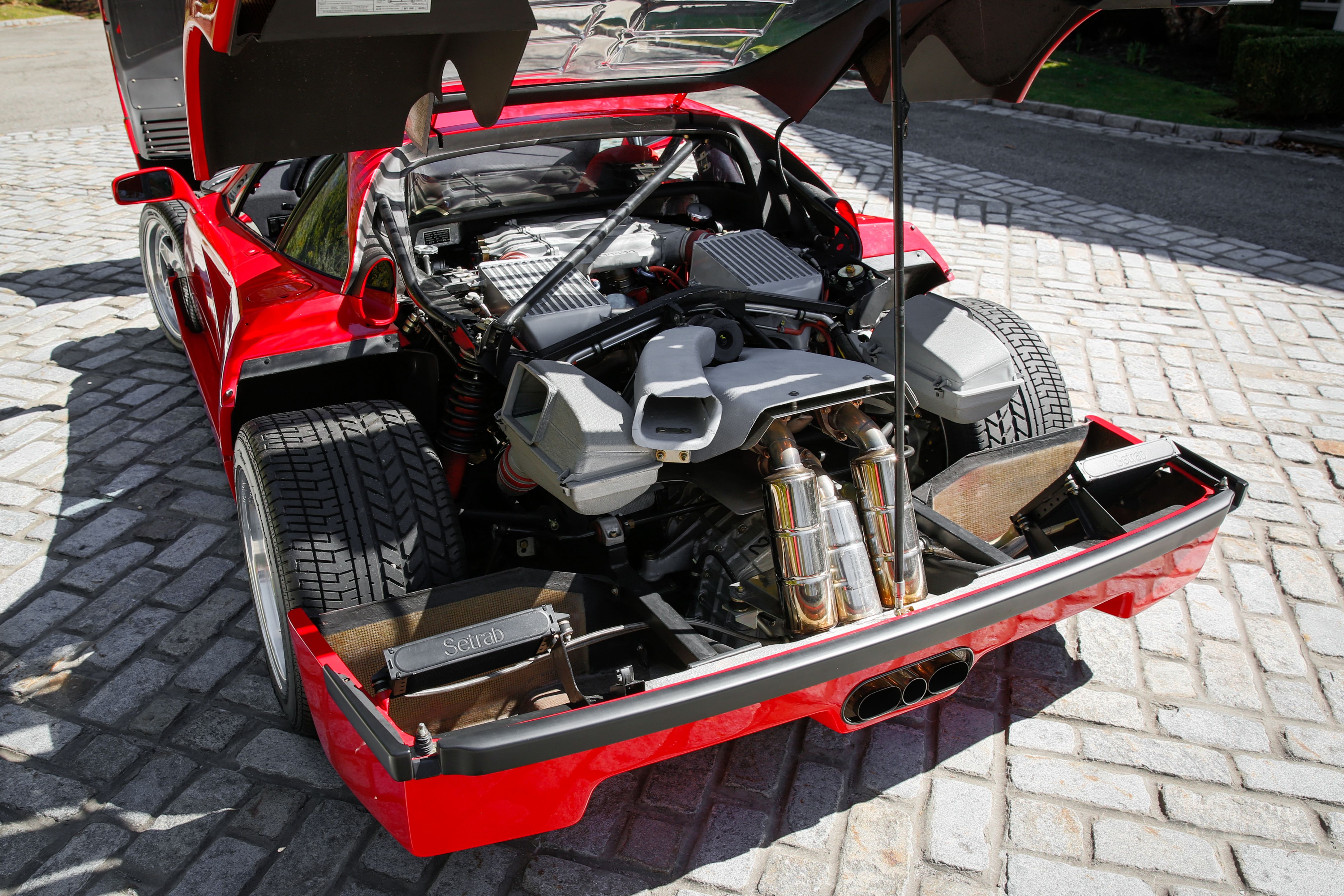 Power is transferred through a 5-speed manual gearbox allowing this Berlinetta to accelerate from 0-60 MPH in approximately 4 seconds while carrying on to its fabled top speed of over 200 MPH. The double-wishbone suspension setup was largely derived from the 288 GTO and stopping power is handled by 330mm discs with Brembo calipers at the front and rear.  This example also benefits from a Tubi high-flow cat-back exhaust system (the original exhaust will be included in the sale).  The car is backed by a thoroughly documented history of maintenance including a major service and timing belt replacement by Miller Motorcars of Connecticut in 2014 at a cost of over $10k. More recently in 2018, this F40 was brought to Ferrari Maserati of Long Island to undergo the replacement of fuel injectors, both fuel pumps, spark plugs, and cleaning of the fuel tank. This example has been run exclusively on high-quality ethanol-free fuel ever since and is currently in excellent mechanical order. 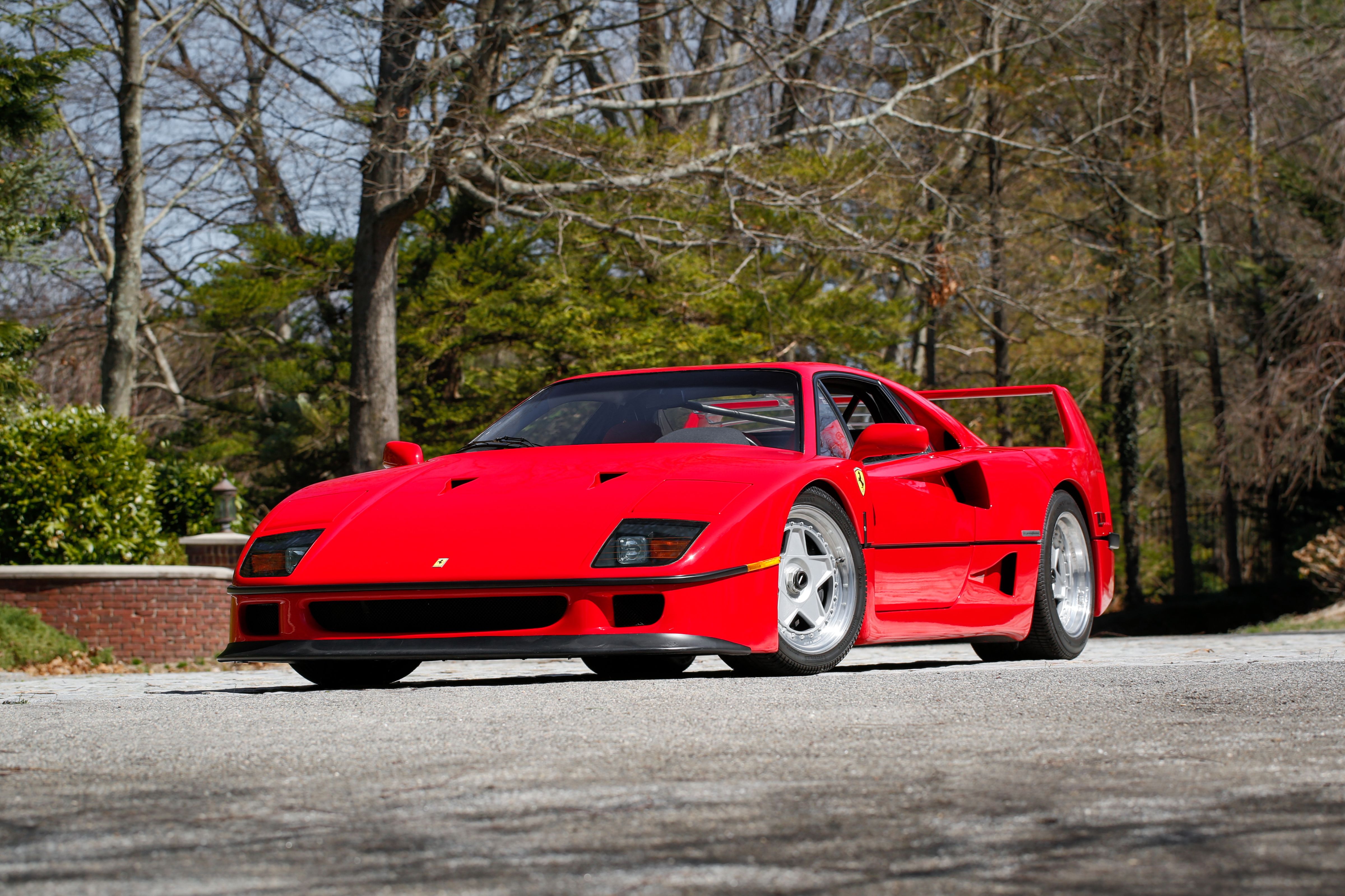 The sale of this F40 will be accompanied by a Classiche Binder, original tool kits, original spare keys, owner's booklet folder, car cover, and service invoices. Considered by many to be the greatest supercar of the twentieth century, the Ferrari F40 remains an automotive icon and a forerunner of modern high-performance technology. With its low and thoroughly documented mileage, this highly original and exceptionally well-preserved U.S market F40 would be a crown jewel in any world-class car collection.