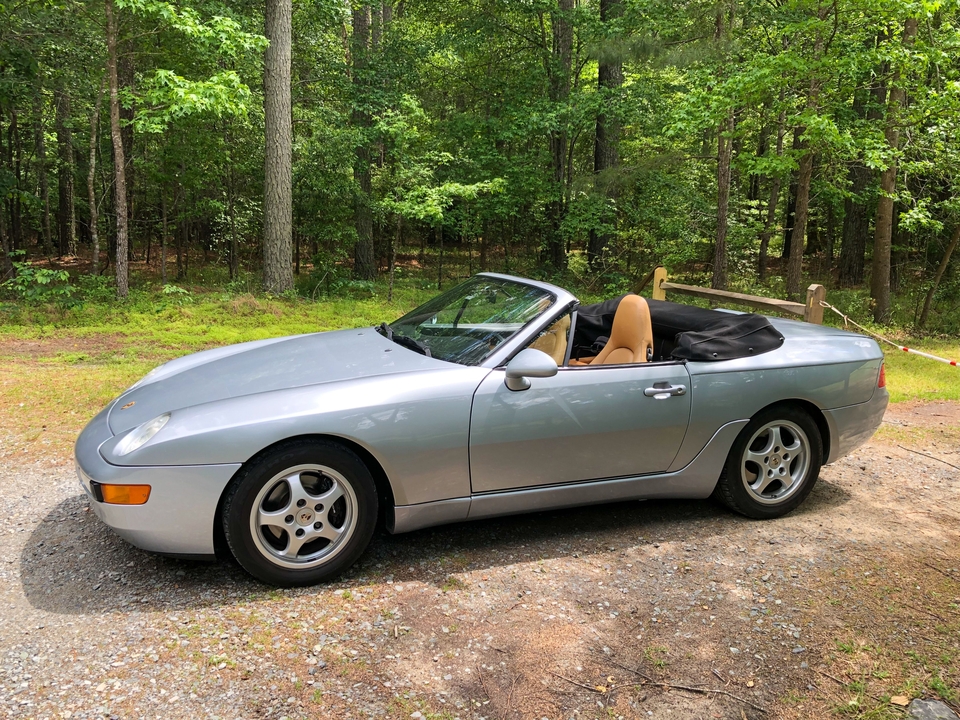 Now available is this 1994 Porsche 968 Cabriolet finished in Polar Silver over Cashmere Beige.  According to the 968 Registry, this 1994 Cabriolet is one of only three North American examples to have been finished in this particular color combination.  It had spent most of its life in Arizona where it was purchased by the seller’s father in 2004, before being acquired by the seller in 2016 and subsequently relocated to North Carolina where it remains today.  Well-presented and described to be in mostly original condition, this 968 is now being offered with approximately 61k miles showing on the odometer accompanied by original books, tools, and a stamped dealer maintenance book.

The Polar Silver finish is preserved by clear protection film applied over the hood and behind the wheel wells.  Some minor cosmetic imperfections are depicted in the photo gallery and the cabriolet top is said to have been thoroughly cleaned and overhauled earlier in 2021.  From the factory, this 968 came equipped with a black cabriolet top and 16” 5-spoke alloy wheels with optional colored Porsche center crests.  These wheels are currently dressed in an older set of Kumho Ecsta tires.

The Cashmere Beige partial leather interior is factory equipped with a power-operated driver’s seat, cruise control, and the HiFi Sound System.  The driver’s seat insert is said to have been previously replaced and some fading is noted on the rear seat carpeting.  An aftermarket Alpine Bluetooth radio has been installed and all other gauges and accessories are said to be working properly aside from the analog clock.

This 968 is equipped with its factory 3.0 L inline 4-cylinder DOHC engine paired with a 4-speed Tiptronic S automatic transaxle. When compared with the outgoing 944 S2 model, the 968’s powertrain featured newly-optimized induction and exhaust systems, updated engine management electronics, and the “VarioCam” variable valve timing system which was a first for road-going Porsche models.  This 968 is accompanied by service records dating back to 1994 as well as the original dealer maintenance book which shows routine service stamps up until 2006 at 52,375 miles.  The timing belt is said to have been replaced at approximately 56k miles within the last 8 years, and the Tiptronic damper was also reportedly replaced in 2019.

This sale will include the original owner’s manuals, toolkit, spare tire, dealer maintenance book, service records, and a clean title. With its well-documented history and clean overall appearance, this 968 makes an excellent choice for any aspiring transaxle Porsche owner.