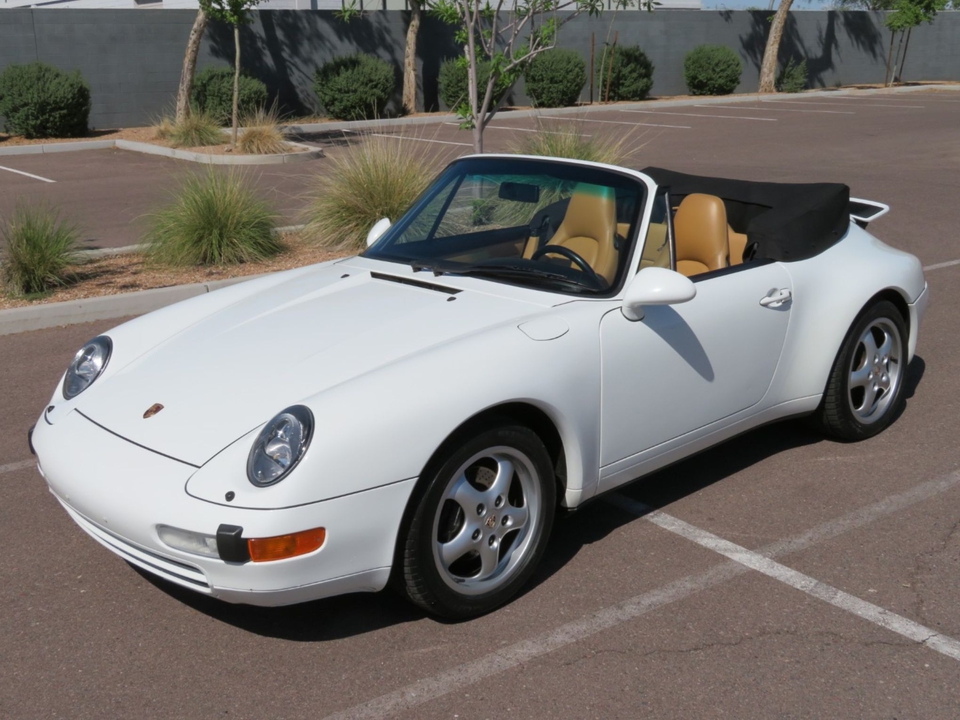 Up for auction is this very well-kept, low mileage 1995 Porsche 993 Cabriolet.  Showing only 50,000 miles, this two-owner car is stated to have been garage kept and pampered its entire life. The original owner purchased the car new from D-Patrick Porsche in Evansville, IN and later transported it to Phoenix, Arizona in 1999. The 911 was then purchased by the current seller in 2003 and is currently being offered in excellent condition. 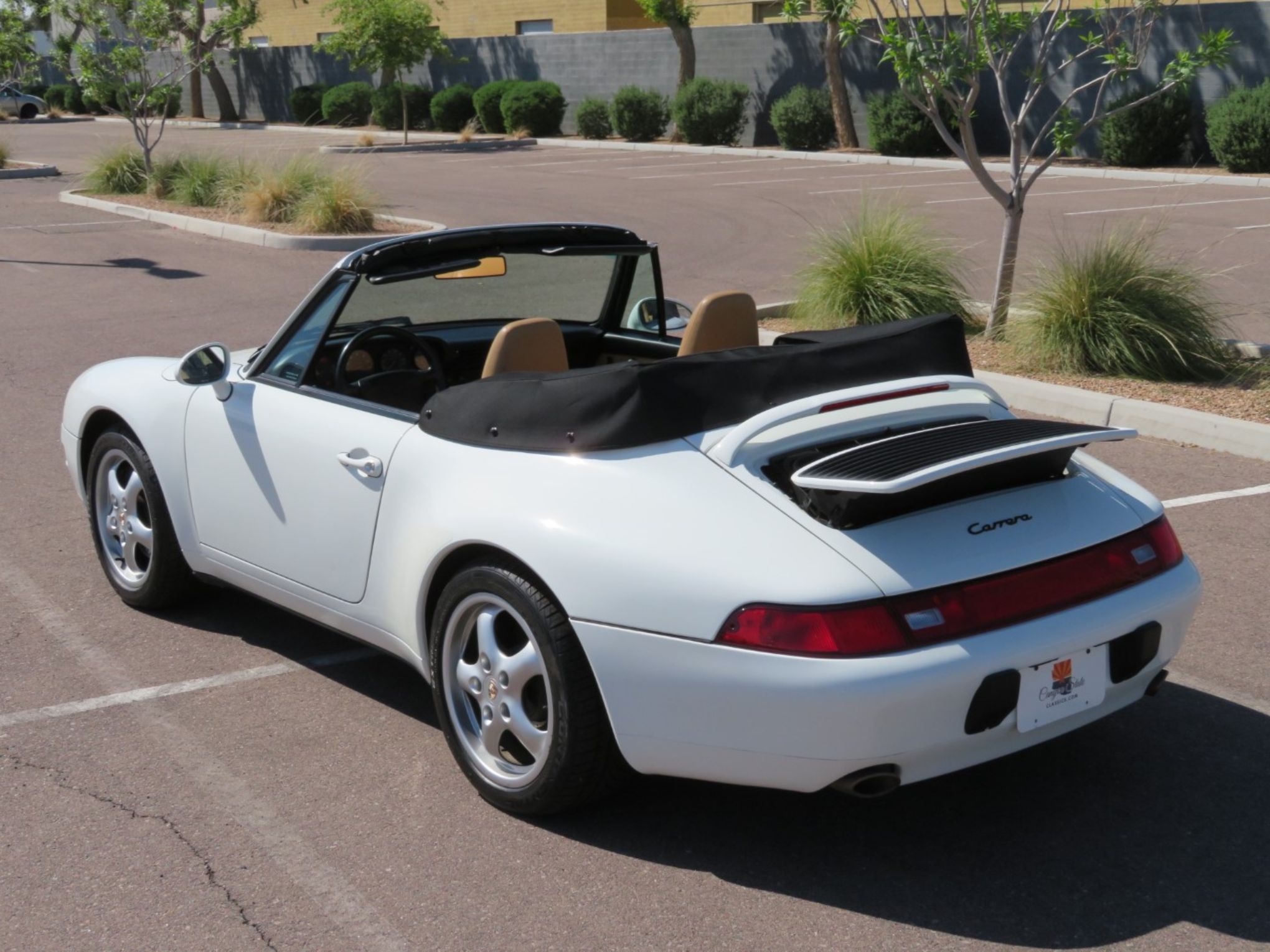 This Porsche's classic factory Grand Prix White paint is stated to be all original and in excellent condition. The owner states that there is one light scrape on the edge of the rear passenger wheel well.  The Carfax and Autocheck validate this car to have never been in an accident. The German cloth canvas top and boot are brand new with a scratch and rip free back window. The car also comes equipped with a factory installed fold up wind screen. 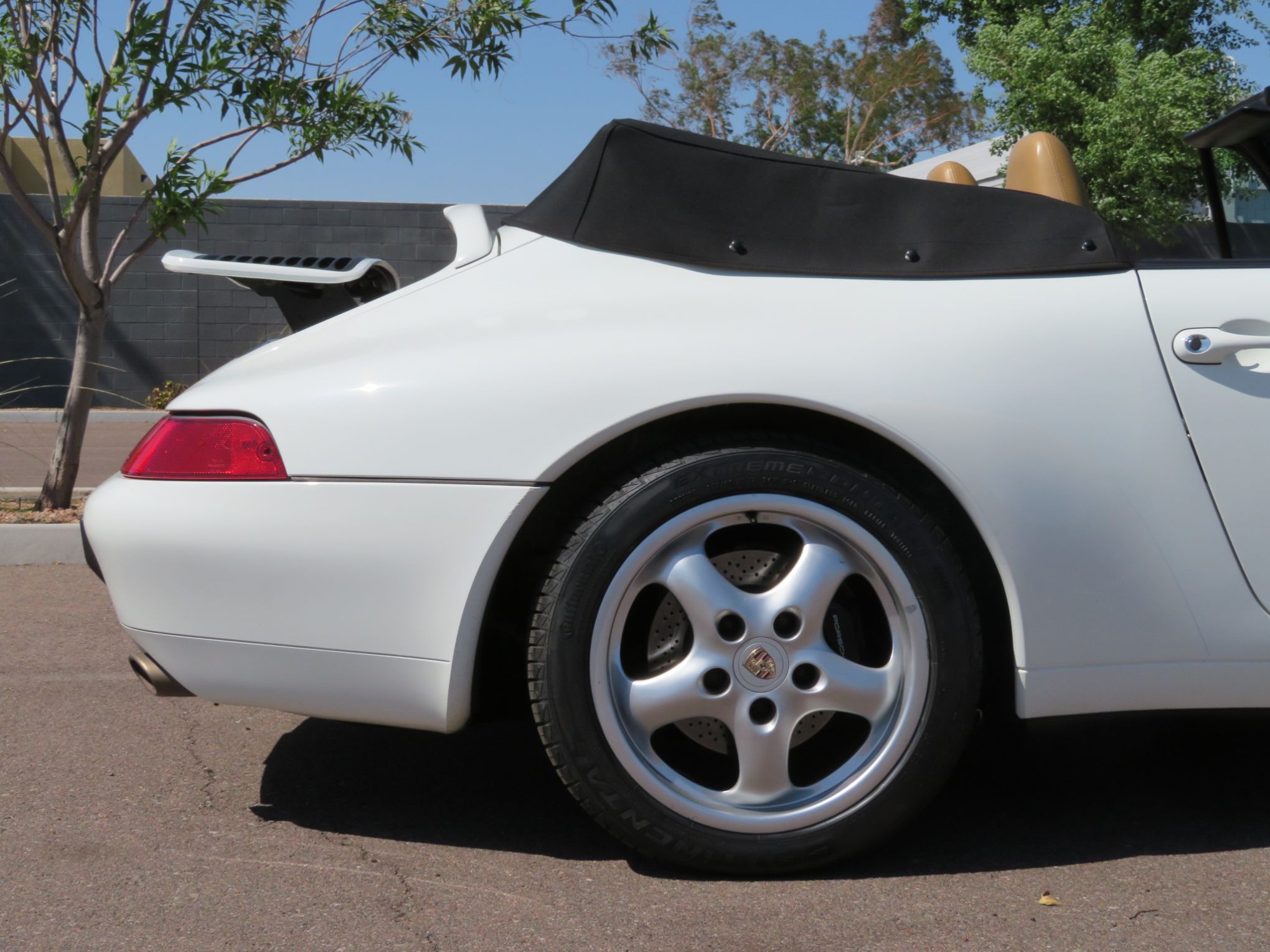 The car is riding on its original Porsche 17" staggered Cup II wheels that wear a brand new set of performance tires. The seller states that zero curb rash is present. 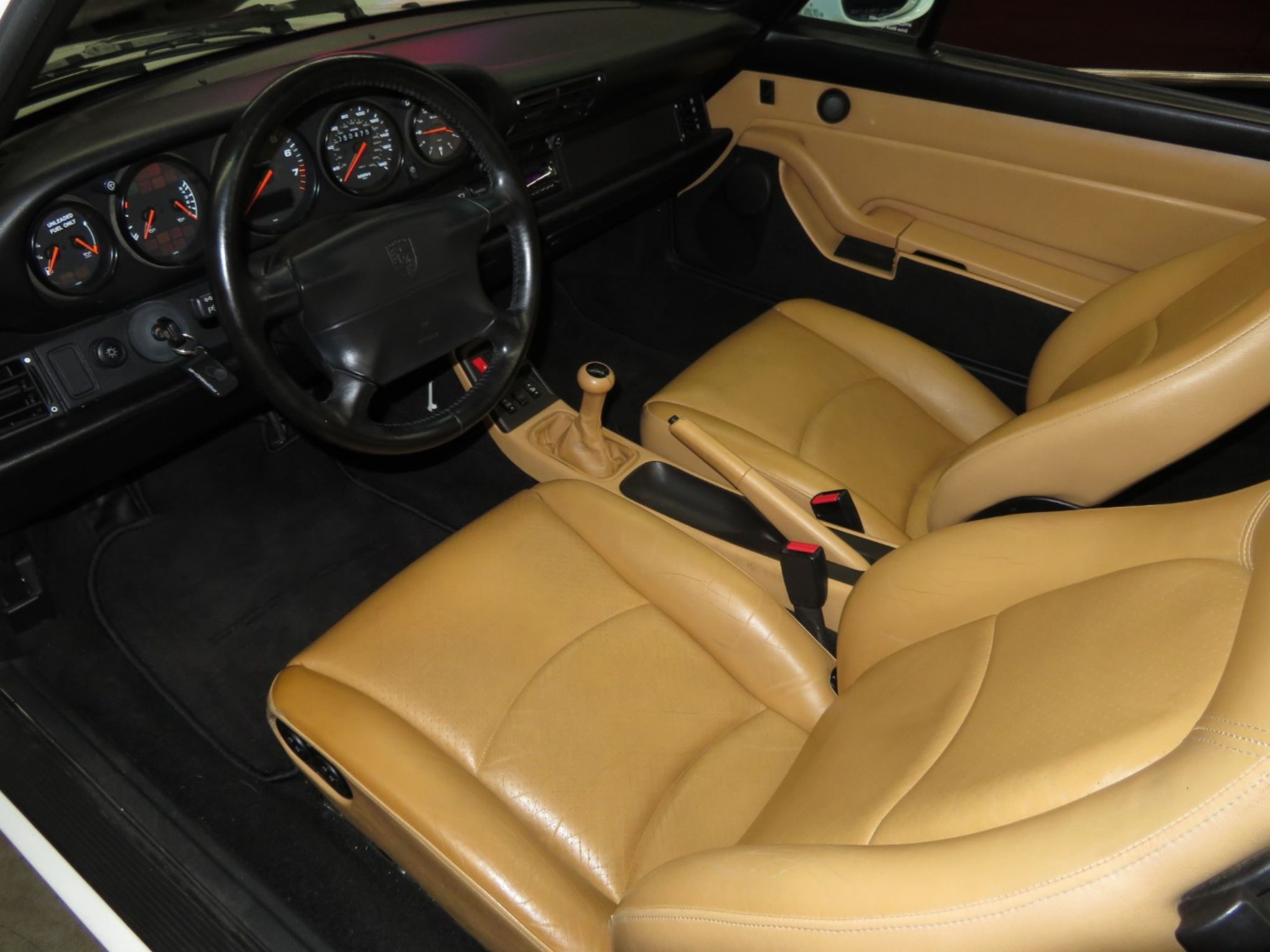 The beautiful tan leather interior is all original and is stated to be in exceptional condition. The leather seats are like new with no scuffs or deep wear lines. This car was ordered new with the expensive two-tone leather option which provides a tasteful tan and rich black contrast on the dash, door panels, and all seating surfaces. A few noteworthy factory options include: the rare factory digital speedometer and trip computer, a premium CD surround system, power mirrors, climate control, and cruise control. All electronics work as they should including the recently serviced power top. 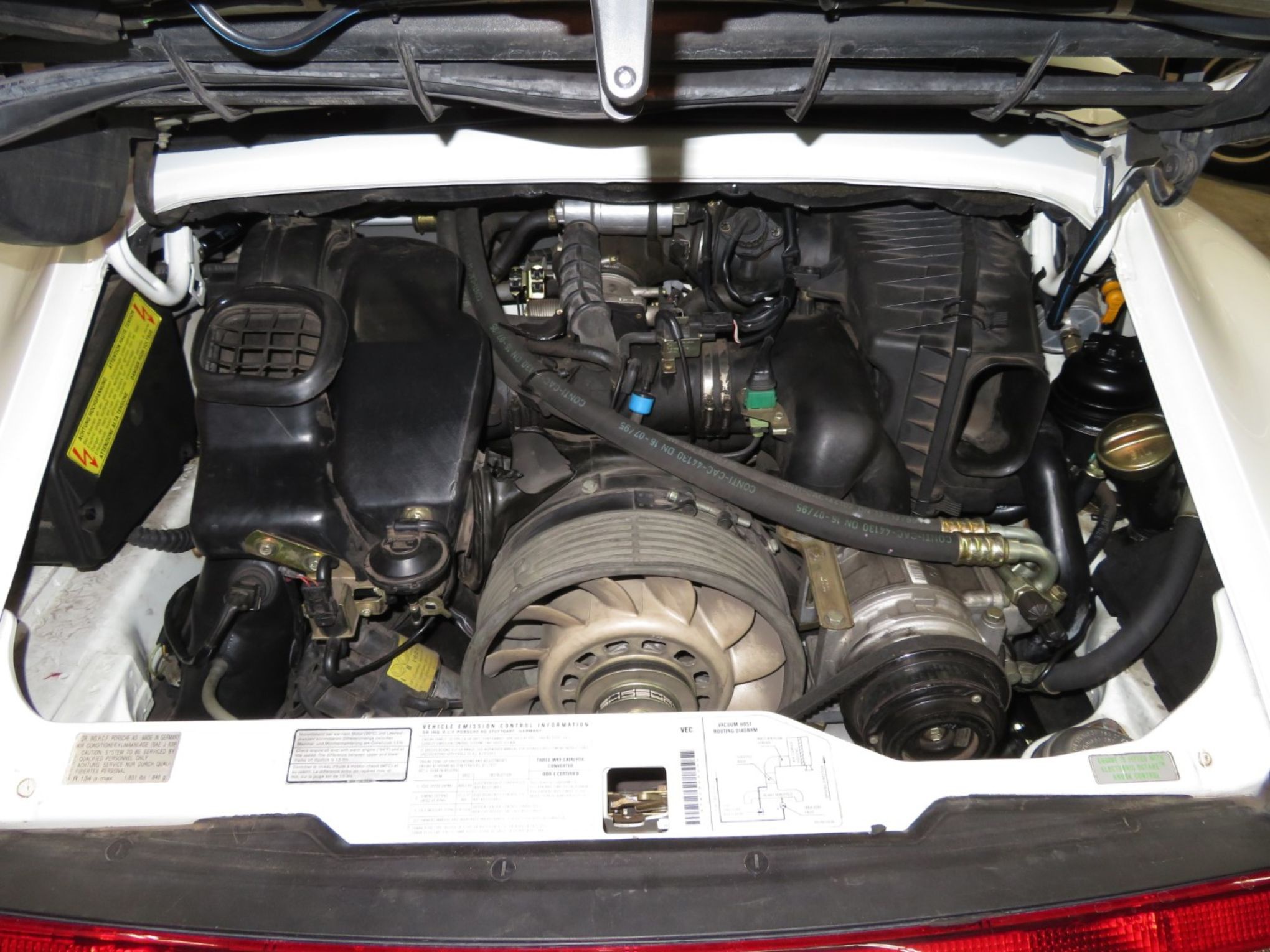 Power comes from a 3.6L flat-six engine that produces 282HP and is connected to a 6-speed manual gear box. Performance numbers include 0-60 in 5.7 sec with a top speed of 168mph. A recent service was performed at an independent Porsche center that included fluid changes, replaced deck lid struts, and a replaced window switch. The seller states that the A/C blows ice cold and the heat works as it should. The seller has also provided multiple photos of service stamps proving the consistent maintenance this 911 has received throughout its life. 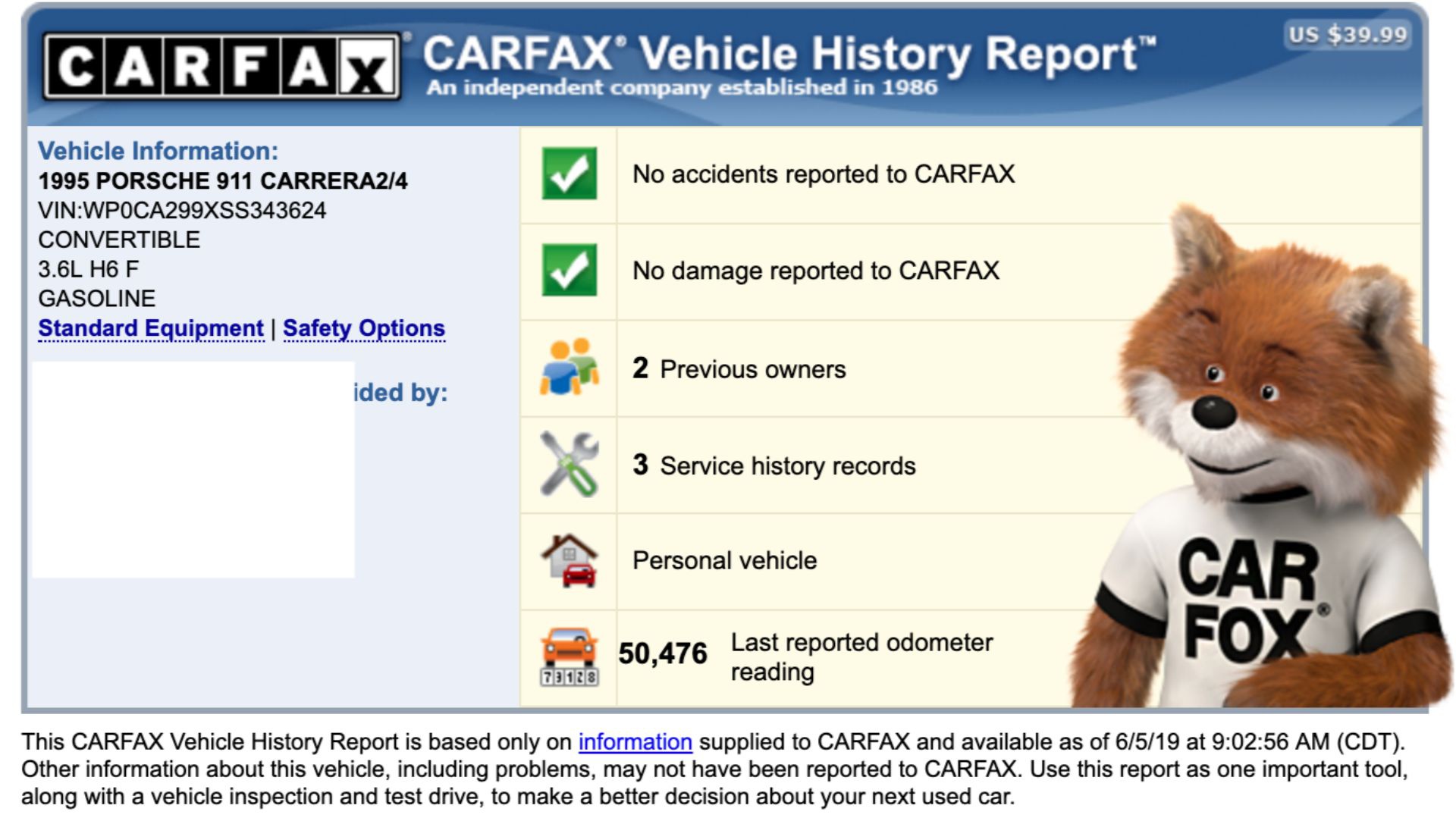 The sale will include its original manuals, extensive service records, a clean Carfax, tool kit, spare tire, jack, and keys.