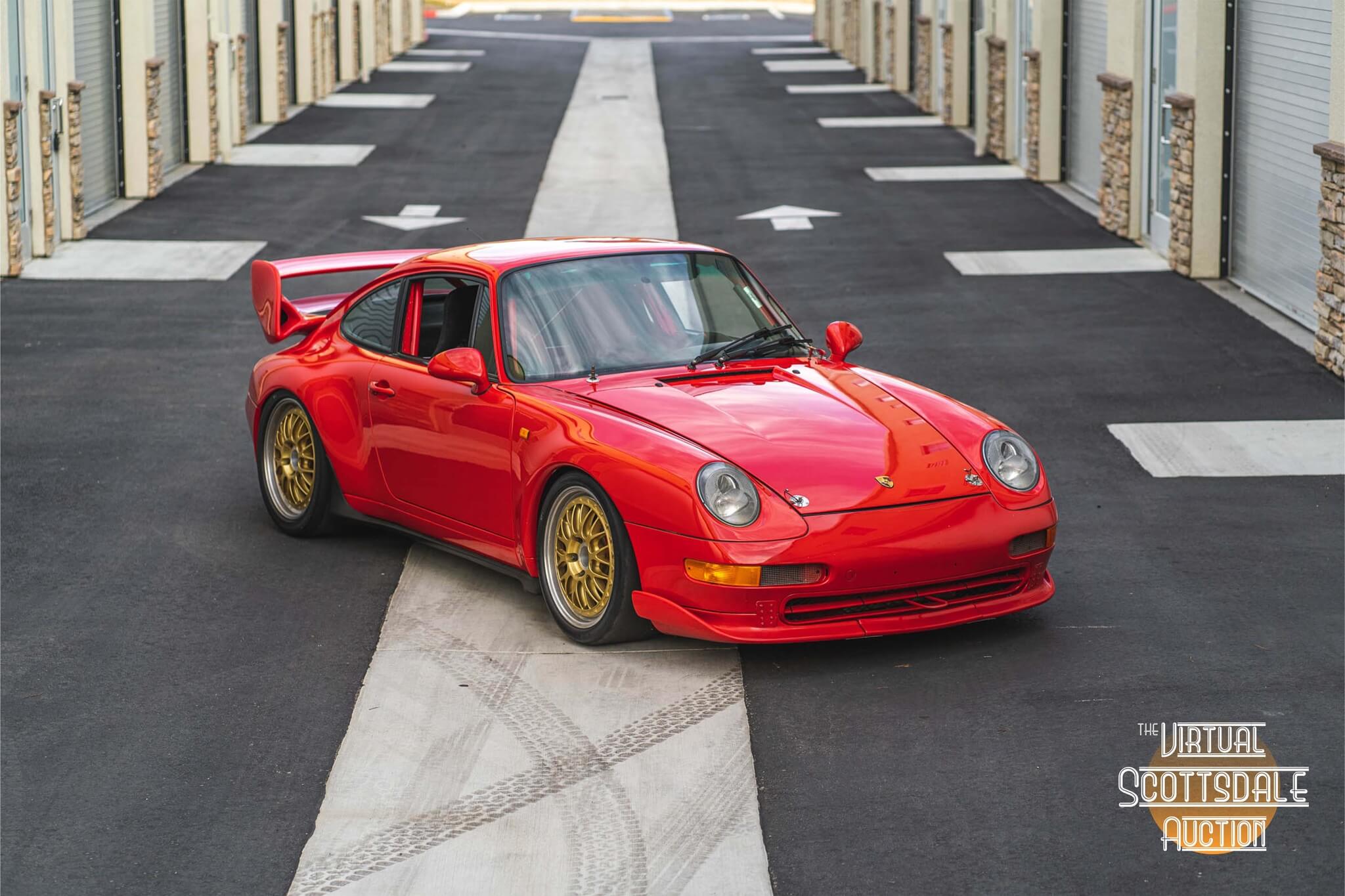 One of the purest and most celebrated air-cooled cars of all time, the 993 Carrera RS was developed as a lightweight track-focused version of the Carrera, featuring an upgraded 3.8L engine, limited-slip differential, 6-speed transmission with modified gear ratios, and the larger Brembo brakes of the 911 Turbo.  This Guards Red 1995 example is one of 1,014 produced in total, and only 213 equipped with the Clubsport option which eliminates virtually all creature comforts and equips a welded roll cage along with more aggressive aerodynamics. It was sold new in Germany and later modified by RUF Automobile of Pfaffenhausen shortly before it was imported to the U.S. in 1997. It was acquired by the current owner in 2003 and subsequently campaigned in SCCA and PCA racing events. Accompanied by racing logbooks, service records, and documented correspondence with Porsche and RUF, this rare Carrera RS Clubsport is now being offered for auction by its seller out of California. 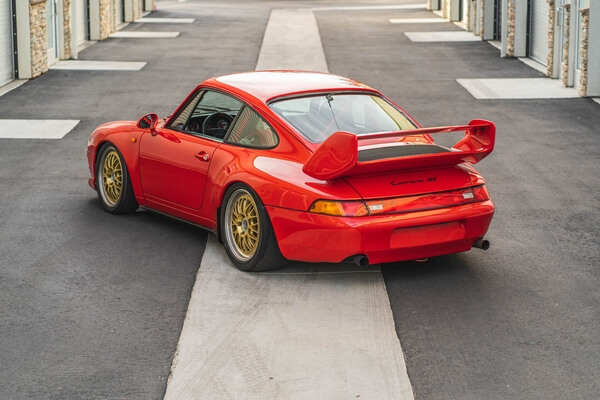 This 993 comes finished in Guards Red (L84A) and features a seam-welded body shell with an aluminum alloy front bonnet and Lexan windshield. The Clubsport package adds a larger adjustable rear wing with integrated air scoops as well as a more prominent chin spoiler.  The seller notes paintwork was performed by Kelly’s Body Shop of Centralia, Washington, in December 2015,  detailed images are provided in the gallery.  The 18” BBS multi-piece wheels are mounted with 245/35 front and 315/30 rear Hoosier racing tires. 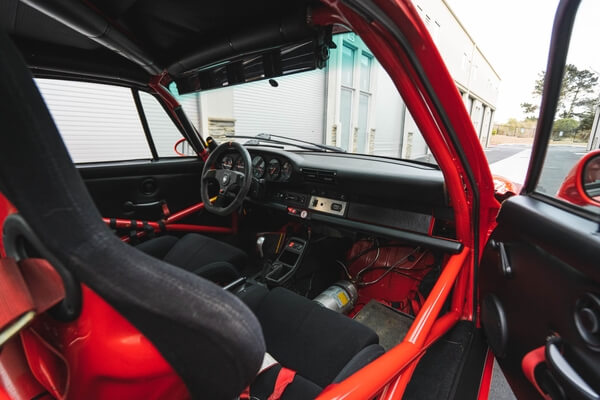 From the factory, Clubsport models were equipped without carpeting, sound insulation, a headliner, radio, or power accessories.  Equipment includes factory Recaro bucket seats, a factory welded roll cage, fire suppression system, a F.A.S.T. cool shirt system, Schroth Racing harnesses, a four-panel rearview mirror, and a suede-wrapped MOMO steering wheel. This example was ordered with an optional driver’s airbag and air conditioning, although both systems were removed by RUF in January of 1997. The odometer currently shows just over 47k kilometers or 29k miles. 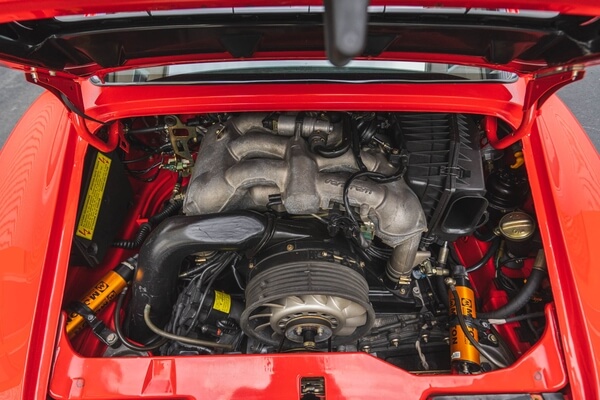 The Carrera RS comes equipped with an air-cooled 3.8L M64/20 flat-six engine featuring a VarioRam intake system, lightweight forged pistons, dual oil coolers, and specialized Bosch Motronic tuning.  The rear wheels are driven through 6-speed G50/31 manual gearbox with a short shifter, modified gear ratios, and a limited-slip differential.  The factory-rated output was approximately 300 HP, and the car was upgraded with headers and exhaust from RUF Automobile in December of 1997.  The Carrera RS comes standard with the “Big Red” Brembo brakes of the 911 Turbo as well as a lowered and reinforced suspension with adjustable sway bars. Service records are provided for reference in the gallery including an invoice for major engine-out service and transmission overhaul by Rothsport, Inc. in 2003.  Racing logbooks accompanying the sale record track events at Texas Motor Speedway, Virginia International Raceway, Road America, Watkins Glen, Mid-Ohio, WeatherTech Raceway Laguna Seca, and more. 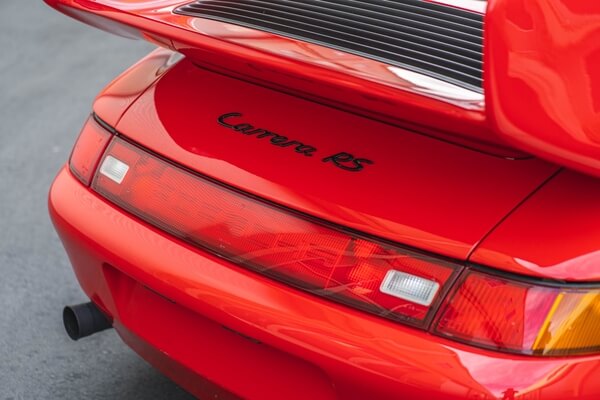 This sale will include documentation and a bill of sale. Factory equipped as a Clubsport version and upgraded by RUF in Germany, this Guards Red 1995 Carrera RS would be a crown jewel in any air-cooled Porsche collection.