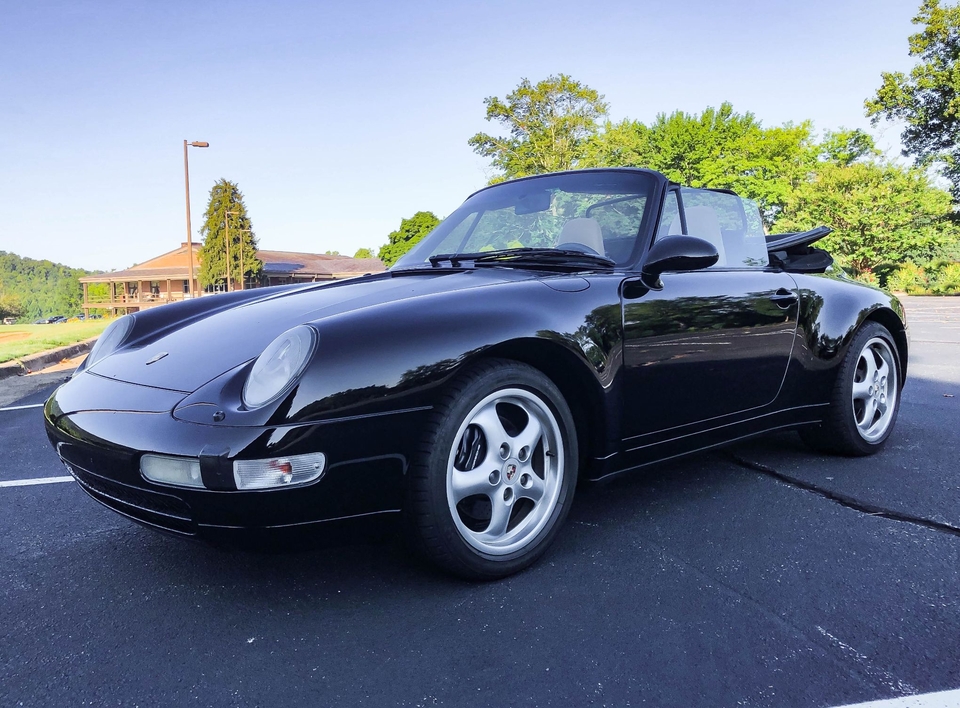 We are pleased to present this 1996 Porsche 993 Carrera Cabriolet 6-speed presented in black over a black and Cashmere leather interior.  As the final generation of the air-cooled Porsche 911, the 993 has become increasingly sought after by both collectors and driving enthusiasts alike.  Purchased by the seller from its second owner in 2004, this 1996 Cabriolet highlights some tasteful modifications as well as a 3.6 L engine rebuilt by Pat Williams Racings.  Showing 57k miles on the odometer and accompanied by over $30k worth of service records and invoices, this Carrera Cabriolet offers a tremendous value for any avid Porsche enthusiast. 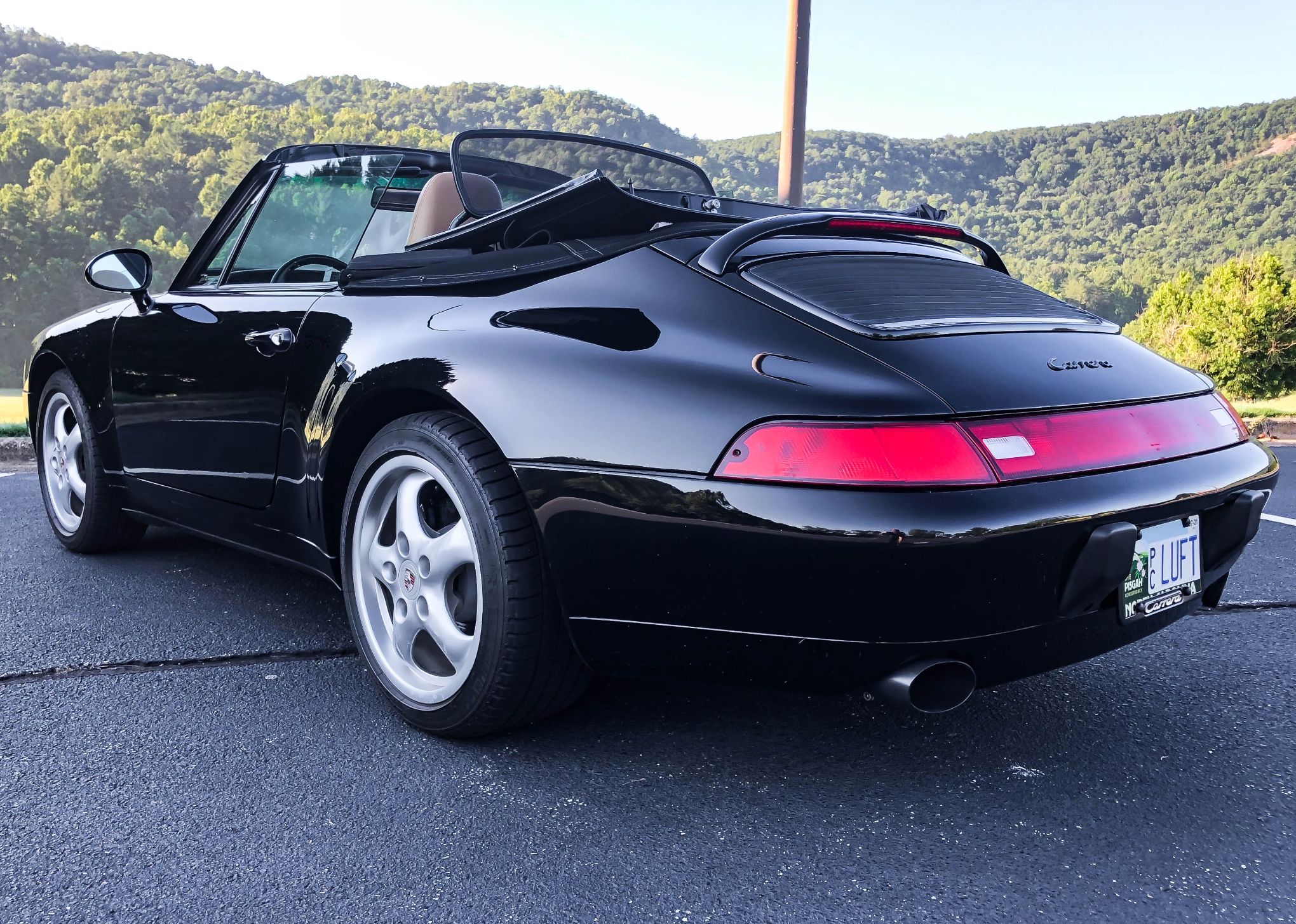 The black paint is said to be in excellent condition and the seller notes that the front bumper was professionally refinished for cosmetic purposes in 2010 along with the rear bumper cover and rear quarter panels.  New body seals have been installed and clear paint protective film has also been applied over the front bumper, hood and fenders; detailed images are provided in the photo gallery.  The low beams have been converted to HID and the 3rd brake light has also been converted to LED to improve visibility. This Cabriolet rides on factory 5-spoke alloy wheels which come dressed in Michelin Pilot Sport tires dated 2014 in the front and 2017 in the rear with plenty of tread life remaining. 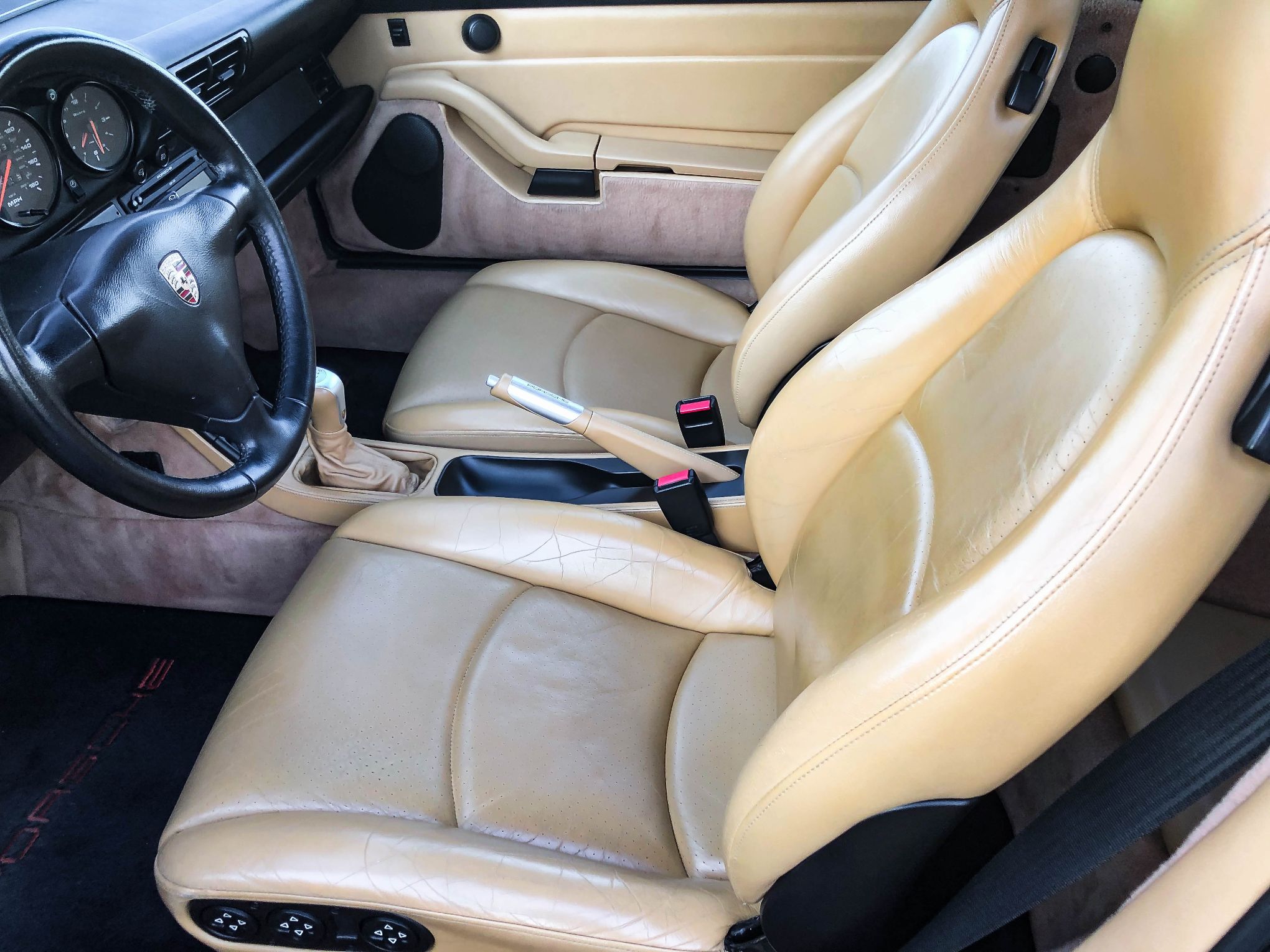 Inside, this 993 features a two-tone black and Cashmere leather interior which is said to be in great shape.  The cabriolet top is also reported to have been completely replaced in 2007.  Modifications include a retrofitted 996 Porsche Techquipment shift knob, Porsche Techquipment emergency brake, 3-spoke 996 steering wheel and an OEM leather center console.  This 993 retains its Becker CDR-210 radio, and the seller confirms all gauges, electrical components and accessories to be fully functional. 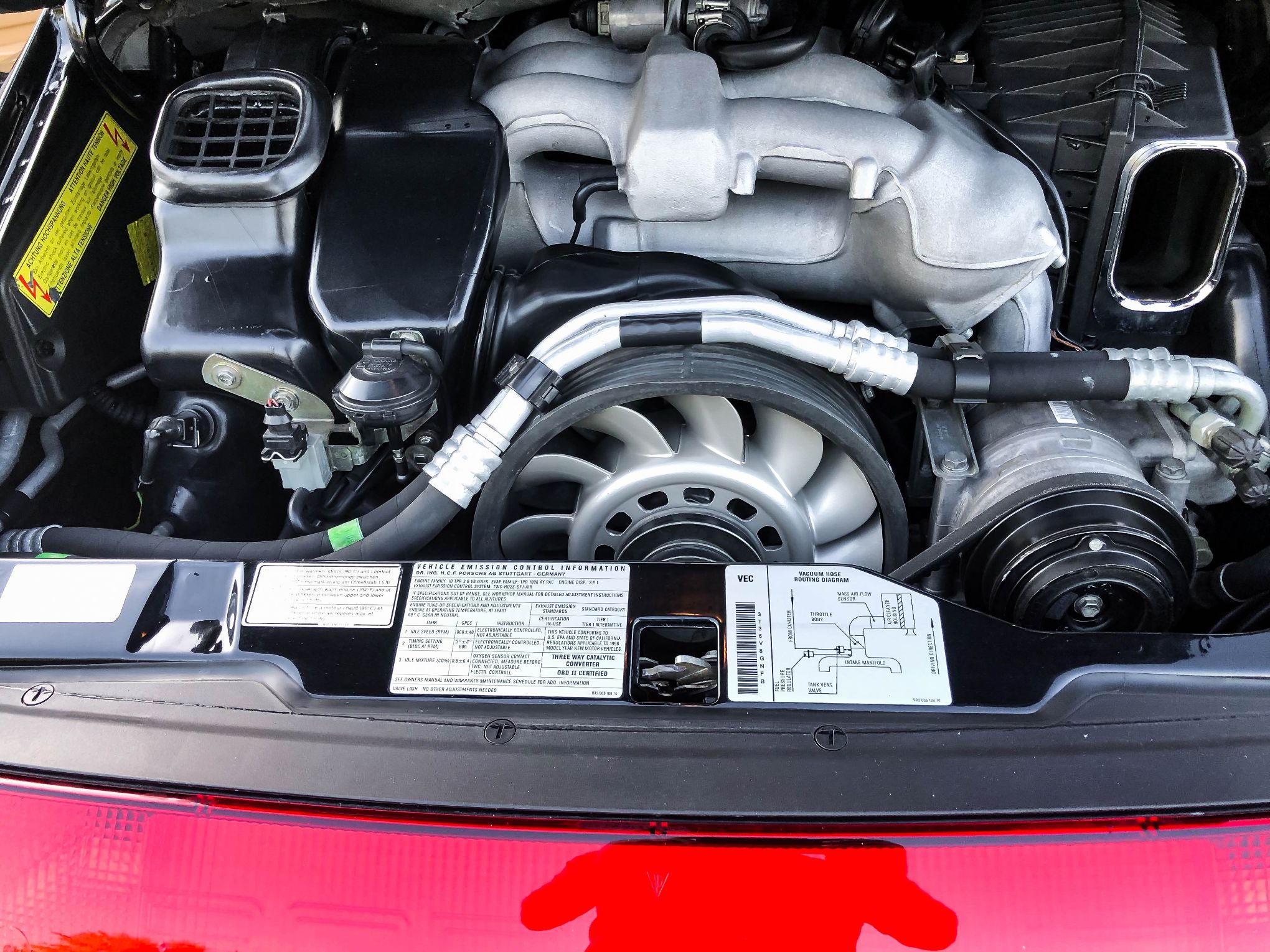 This 993 carries an air cooled 3.6L flat-six engine which had a rebuild at 53k miles by Pat Williams Racing in 2013.  The rear wheels are driven through a number’s matching 6-speed manual transmission providing for a 0-60 time of approximately 5 seconds.  The engine rebuild also included new dual distributor belts and a new Sachs clutch.  Following the completion of the work, this 993 was dyno tested at 261 WHP or approximately 305 HP at the engine.  The engine is said to run extremely well and is predicted to run strong for many years to come.  Performance modifications include solid RS engine mounts, an upgraded Porsche air box and a Fister Stage 2 muffler which has been ceramic coated in black and paired with black oval exhaust tips.  The seller notes that this 993's performance is greatly enhanced when compared to other examples on the road.  The alternator has been rebuilt, a new cooling fan has been installed, and the seller confirms this Carrera to be up to date on all due oil and filter changes. 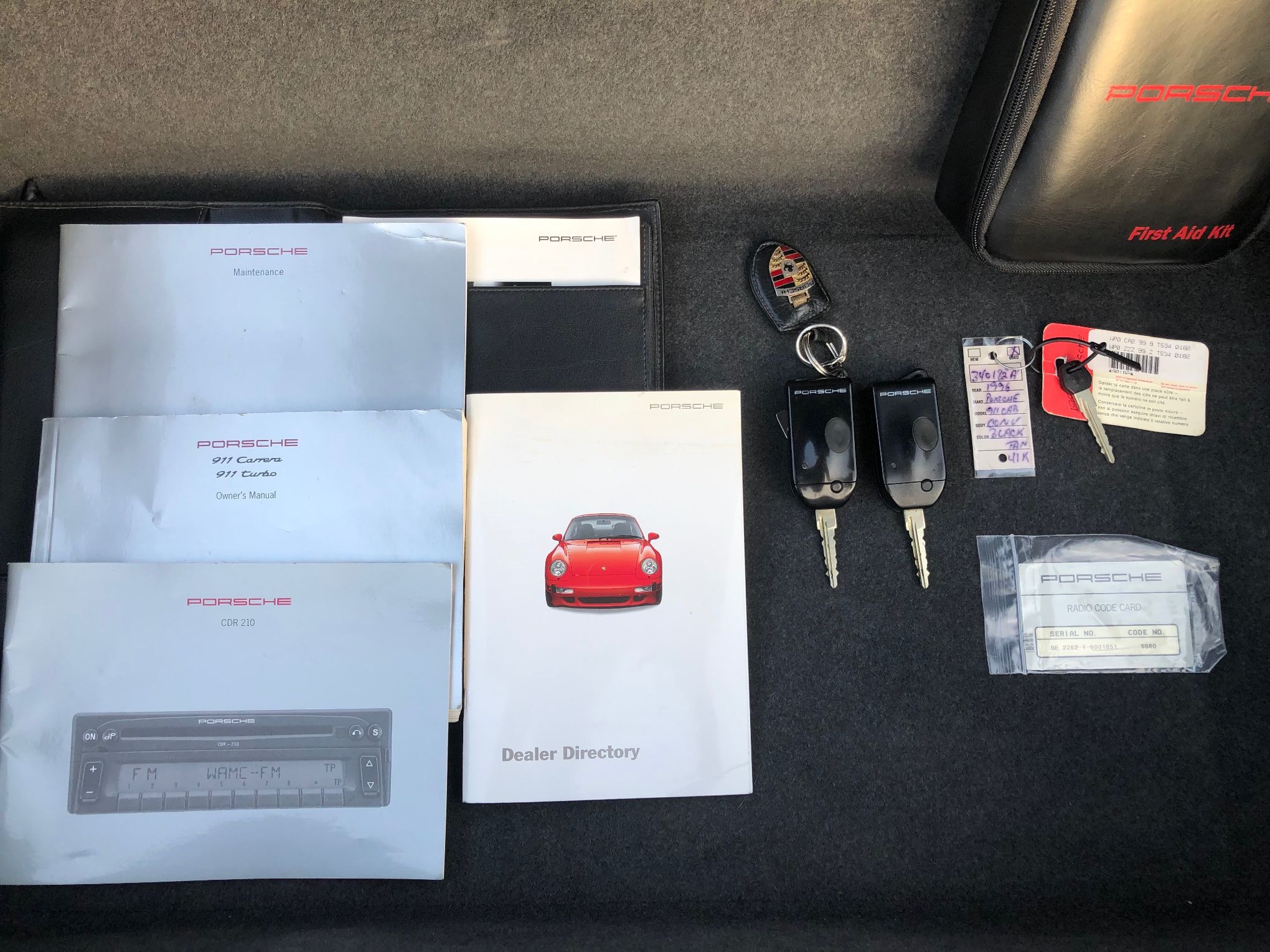 The sale of this 993 will include a set of two keys, the original books and tools, a like-new spare tire, like-new air compressor and over $30k worth of service records and invoices dating back to 2000.  Do not miss your chance to own this nicely upgraded 993 Cabriolet 6-speed.