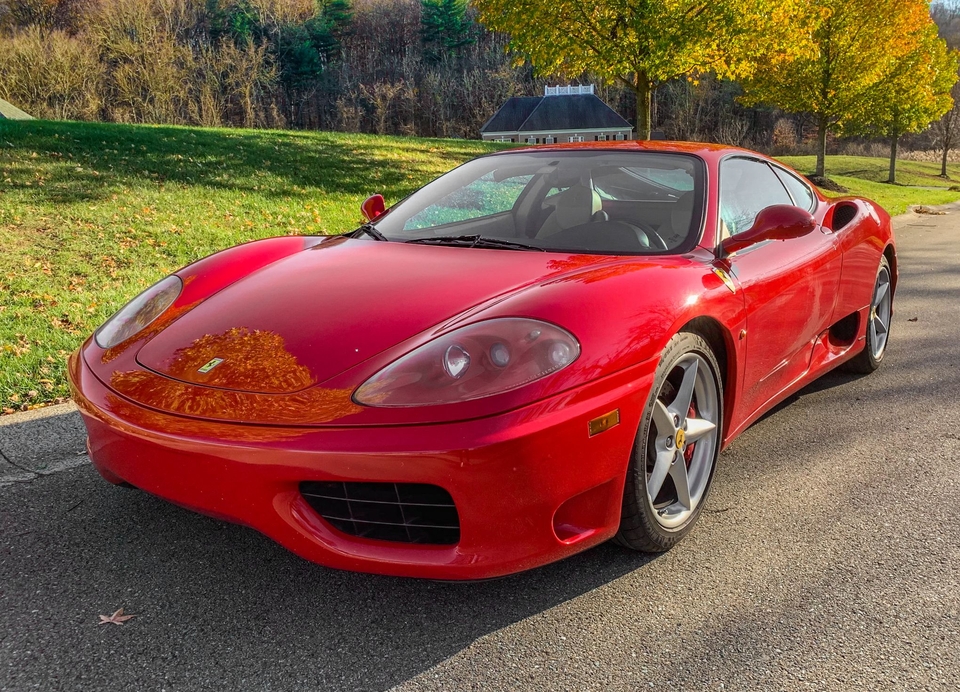 Now up for auction is this 1999 Ferrari 360 Modena. Finished in Rosso Corsa over a tan leather interior with Daytona seats and a coveted 6-speed gated shifter, this 1999 example is presented in Ferrari’s most traditional configuration.  This 360 features over $21,000 worth of recent maintenance as well as some tasteful upgrades including a cat-less Capristo Stage-3 exhaust and a carbon fiber Novitec Challenge-style rear grille.  Now showing just over 46k miles on the odometer, this 360 Modena is being offered by its seller in Pennsylvania. 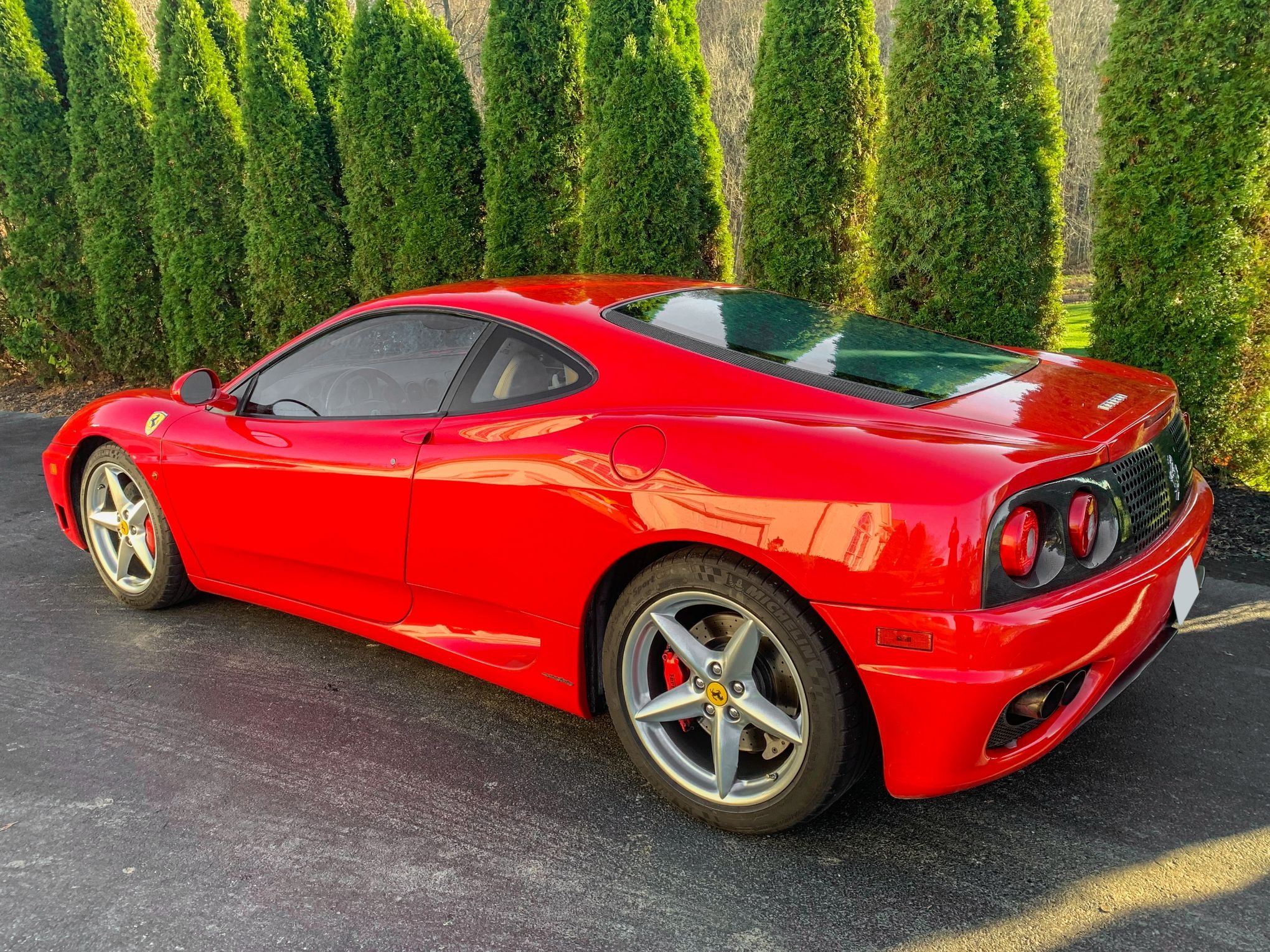 The Pininfarina-designed aluminum bodywork on this 360 is finished in the quintessential color of Rosso Corsa.  The paint is indicated by the seller to be in mostly great condition save for some light road-going wear on the front bumper (detailed images are provided in the photo gallery).  Named after the town of Modena, Enzo Ferrari’s birthplace, the 360 is most notable for its smooth body lines and dramatic styling cues including its glass rear engine lid displaying a naturally aspirated V8.  This example also features optional Scuderia shields which are factory equipped on both front fenders.  An aftermarket carbon fiber Novitec Challenge-style rear grille has been installed, although the original body-colored piece will also be included in the sale.  Factory 18” 5-spoke wheels are retained and dressed Michelin Pilot Super Sport tires exhibiting ample tread life. 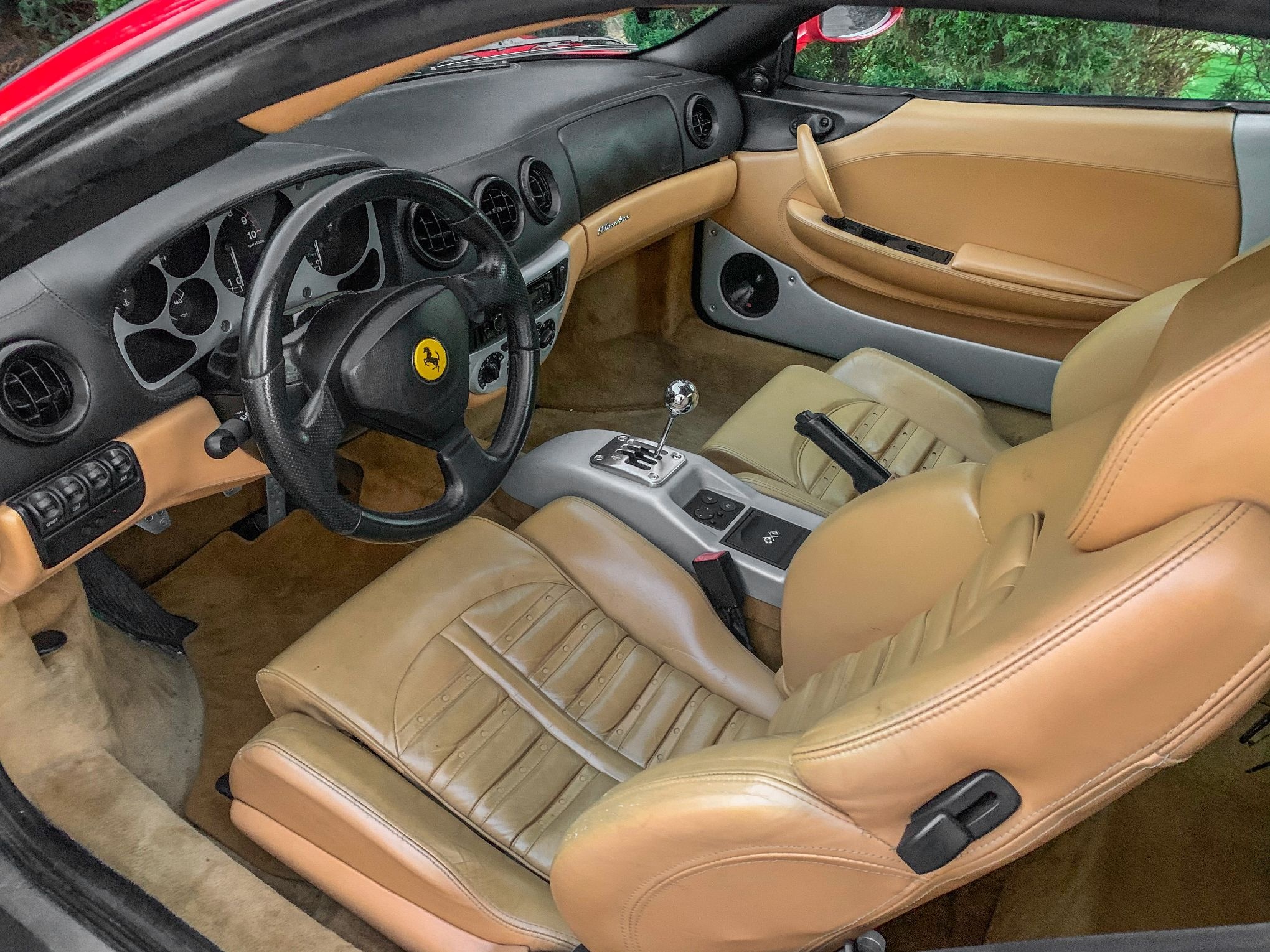 Inside, the tan leather interior features classic Daytona seats and a 6-speed gated shifter with a polished aluminum knob.  Upgraded JBL speakers have been installed along with a Kenwood radio, a new ashtray, and new genuine Ferrari floormats.  The headliner is missing, the dashboard airbag cover shows minor warping, some discoloration can be seen on the seats, and the passenger glove box is said to be slightly out of position.  The airbag warning light needs to reset, and there is an error message related to the aftermarket cat-bypass.  All other gauges and electronics are said to be working properly and the original radio will be included in the sale. 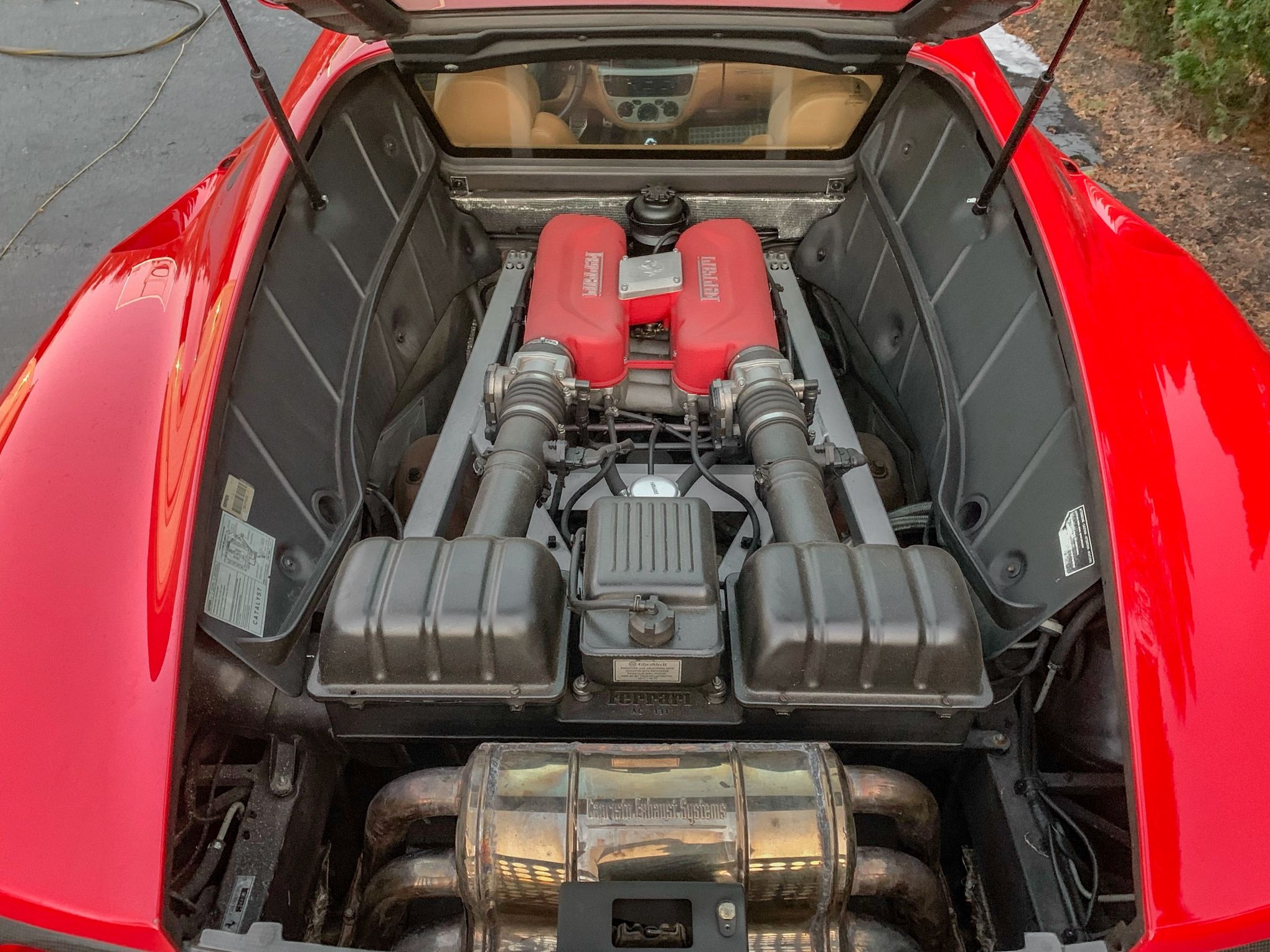 A mid-mounted 3.6 L quad-cam V8 engine sends 396 HP stock to the rear wheels through a traditional 6-speed manual gearbox with limited-slip differential.  0-60 MPH is achieved in as little as 4.5 seconds while reaching a top speed of over 175 MPH.  This naturally aspirated powerplant features a flat-plane crankshaft and titanium connecting rods as well as an upgraded Capristo Stage-3 exhaust system with a Capristo catalytic converter bypass.  The timing belt is said to have been addressed in 2018 at approximately 38k miles and a recent service was carried out by Algar Ferrari of Philadelphia which included a new clutch and the replacements cylinders #5 and #6.  Service records are provided for reference in the photo gallery and the seller has offered to accommodate a pre-purchase inspection.  This 360 is said to be in excellent driving order and ready to be enjoyed. 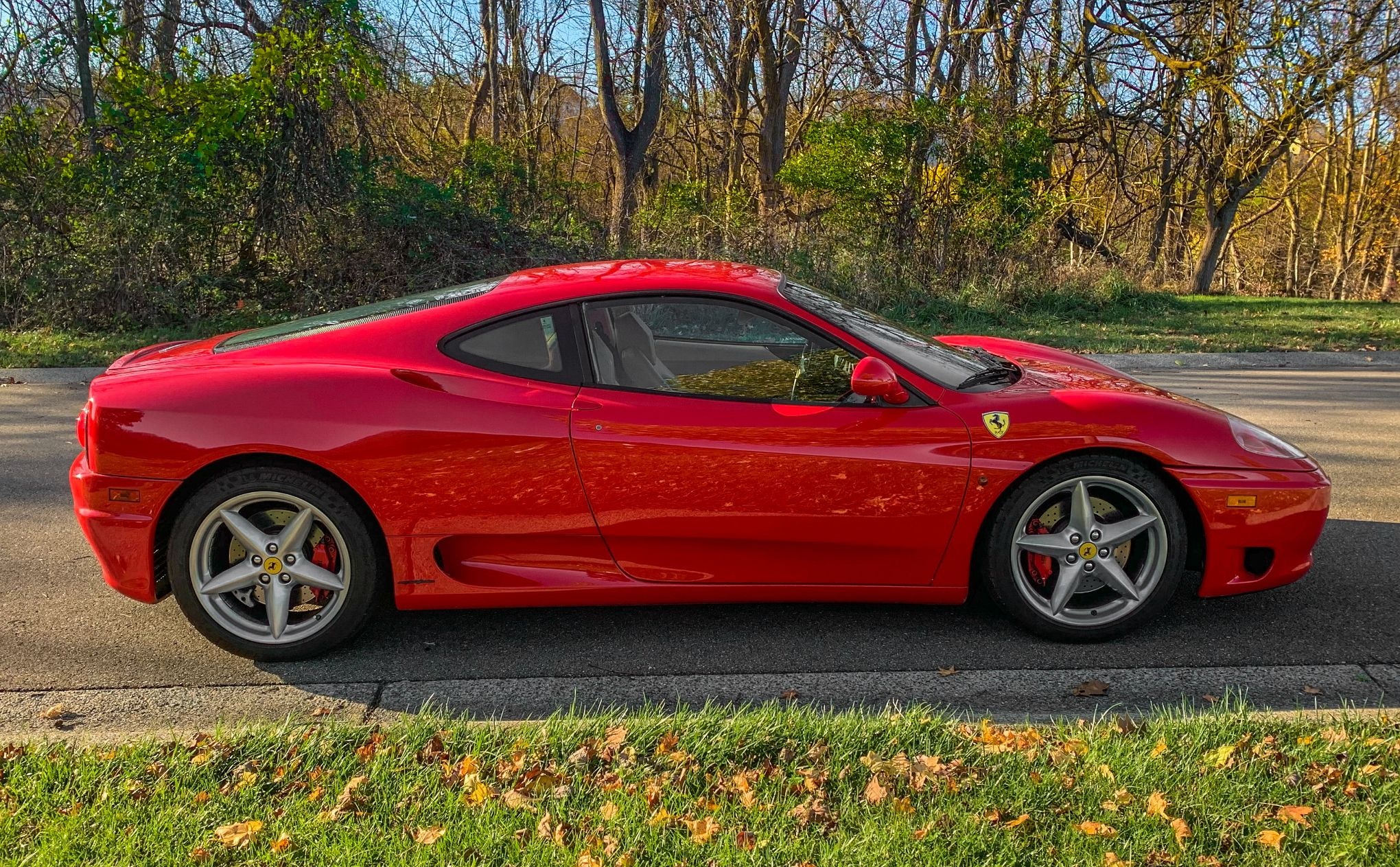 This sale will include a set of 2 keys with remote fobs, service records, a clean title, and the original radio, owner’s manual, and rear grille.  Now is your chance to own a highly sought after 6-speed 360 Modena in its most iconic configuration.