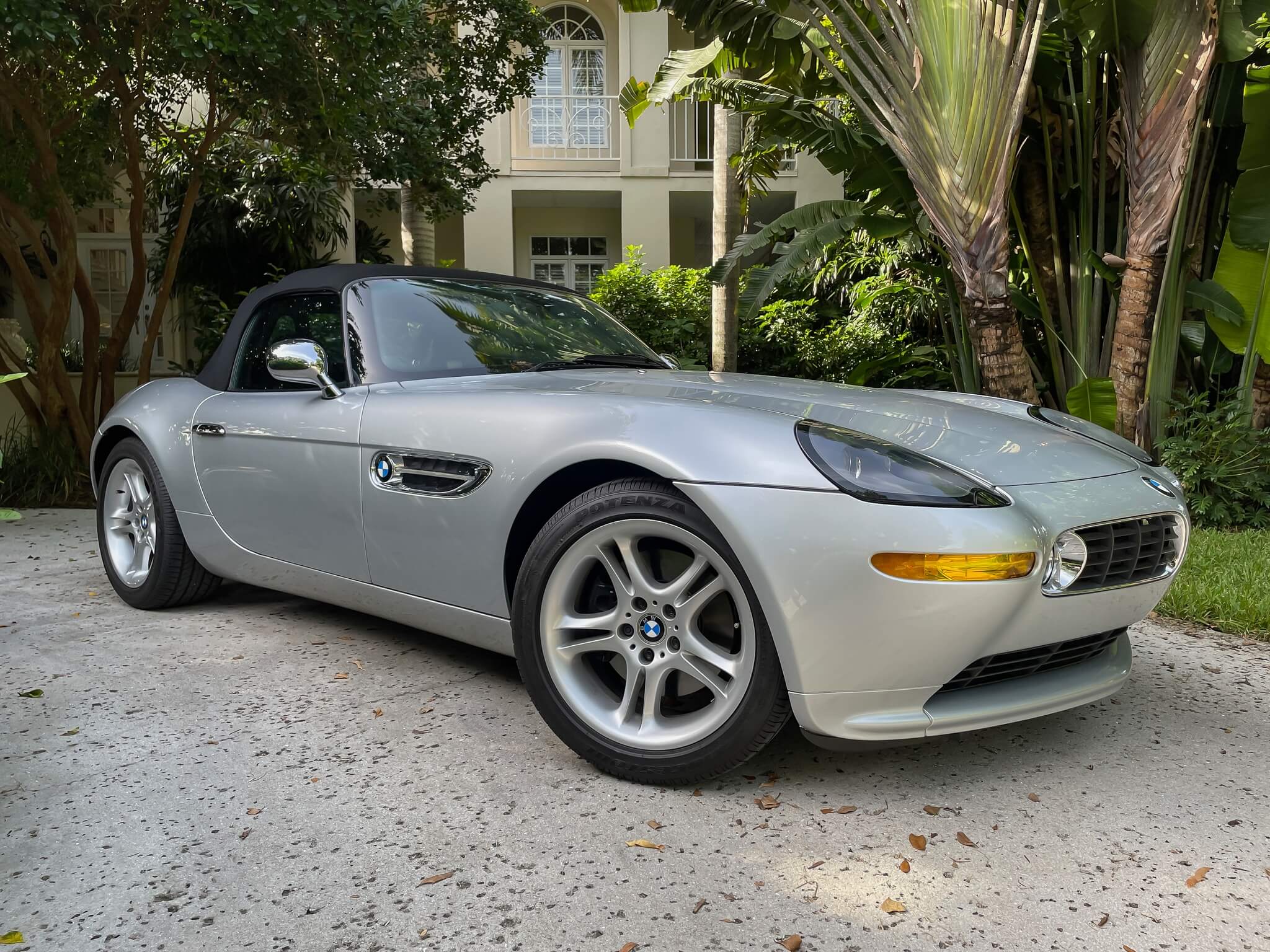 We are pleased to offer this 2000 BMW Z8 Roadster finished in Titanium Silver Metallic over Black Nappa leather.  Designed by Chris Bangle, Henrik Fisker, and Scott Lempert as a tribute to the legendary BMW 507 of the late 1950s, the largely hand-built Z8 was manufactured in limited numbers at BMW’s facility in Munich from 2000-2003.  Featuring an all-aluminum chassis and a 4.9L V8 developed by BMW’s Motorsports Division, the Z8 was well received by critics for its impressive power and handling and went on to become an automotive icon following its role as the hero car in the 1999 James Bond film, The World is Not Enough. This European-spec example was imported and federalized for the U.S. market in December of 2000 by Champagne Imports, Inc. of Pennsylvania.  It came equipped with a removable painted hardtop and desirable 6-speed manual transmission.  Acquired by the current owner in 2015 with approximately 200 miles driven since, this beautifully presented Z8 was recently serviced and is now being offered for auction out of Florida with just over 10k miles showing on the odometer. 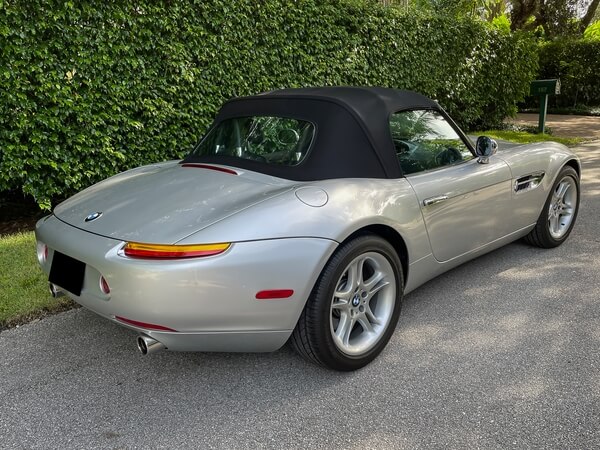 The aluminum bodywork of this Z8 comes finished in Titanium Silver Metallic with a black convertible top and removable painted hardtop. The Z8 features unique neon brake lights and sports several styling cues inspired by the classic 507 including its distinctive chrome side fender vents with BMW roundels and chrome exhaust tips protruding from the rear bumper.  Upon importation to the U.S, the headlights were adapted in compliance with road regulations, although the original European-spec amber taillight lenses remain in place.  Detailed images are provided in the photo gallery along with a clean CARFAX report. This example retains its factory 18” Style 59 double-spoke forged light-alloy wheels currently mounted with Bridgestone Potenza RE040 tires dated from 2011.

The cabin is trimmed in Black Nappa leather with Titanium Silver Metallic painted accents on the dashboard, center console, and door panels.  The steering wheel sports a classic design with a painted round center and triple banjo spokes. All knobs, switches, and primary touchpoints are sculpted from aluminum while the factory infotainment system is hidden behind a door located in the center stack.  Driver amenities include remote keyless entry, a push-button ignition, a 10-speaker Harmon Kardon sound system, an auto-dimming interior mirror, and a passenger-side cup holder.  The seller notes that all systems were reprogrammed for the U.S. market including the odometer, radio, and GPS maps.  The driver-side window regulator is reported to be rather slow, although all other gauges and accessories are said to be working properly. 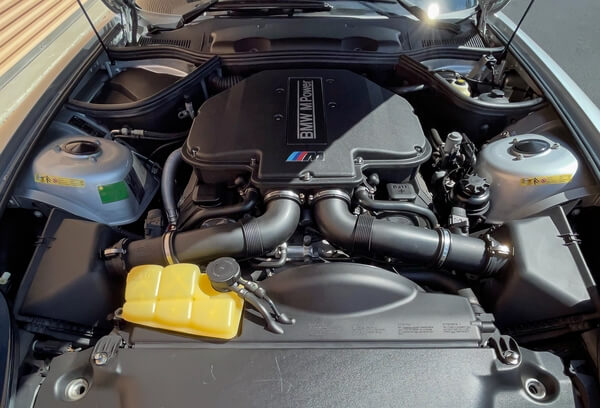 The Z8 carries a 4.9L S62 V8 engine developed by BMW Motorsport which is also shared with the venerable E39 M5. Featuring Double-VANOS variable valve timing, quad hollow camshafts, lightweight aluminum construction, and individual throttle bodies, the S62 was factory rated at 394 HP and 368 lb.-ft of torque. Power is fed to the rear wheels through a 6-speed manual gearbox and limited-slip differential, allowing the Z8 to reach 60 MPH from a standstill in approximately 4.5 seconds.  In a test conducted by Car and Driver, the Z8 outperformed the contemporary Ferrari 360 Modena in braking, handling, and acceleration.  The Z8 comes standard with Dynamic Stability Control, Dynamic Brake Control, 4-wheel vented disc brakes, and fully independent suspension with rear coilovers.  An oil change has been recently carried out along with the replacement of the trunk lid struts, repair of a power steering line, and a full 34-point inspection by Debold Automotive in Naples, Florida.  It should also be noted that BMW has committed to maintaining a 50-year parts supply for the Z8 to ensure long-term usability. 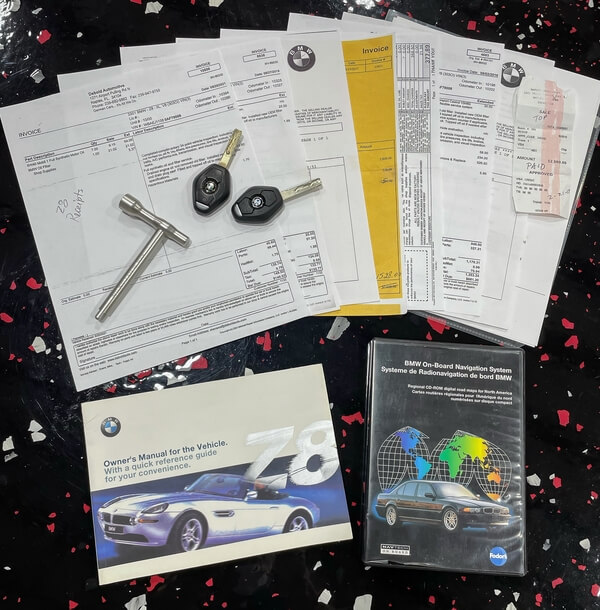 This sale will include a painted hardtop and storage stand, a set of two keys, original owner's manuals, a toolkit, first aid kit, and a clean title.  A must-have for any avid European car collector, the BMW Z8 is a modern automotive icon and a beautiful representation of retro-inspired design.  Do not miss your chance to own this stunning 2000 example with just over 10k miles traveled from new.