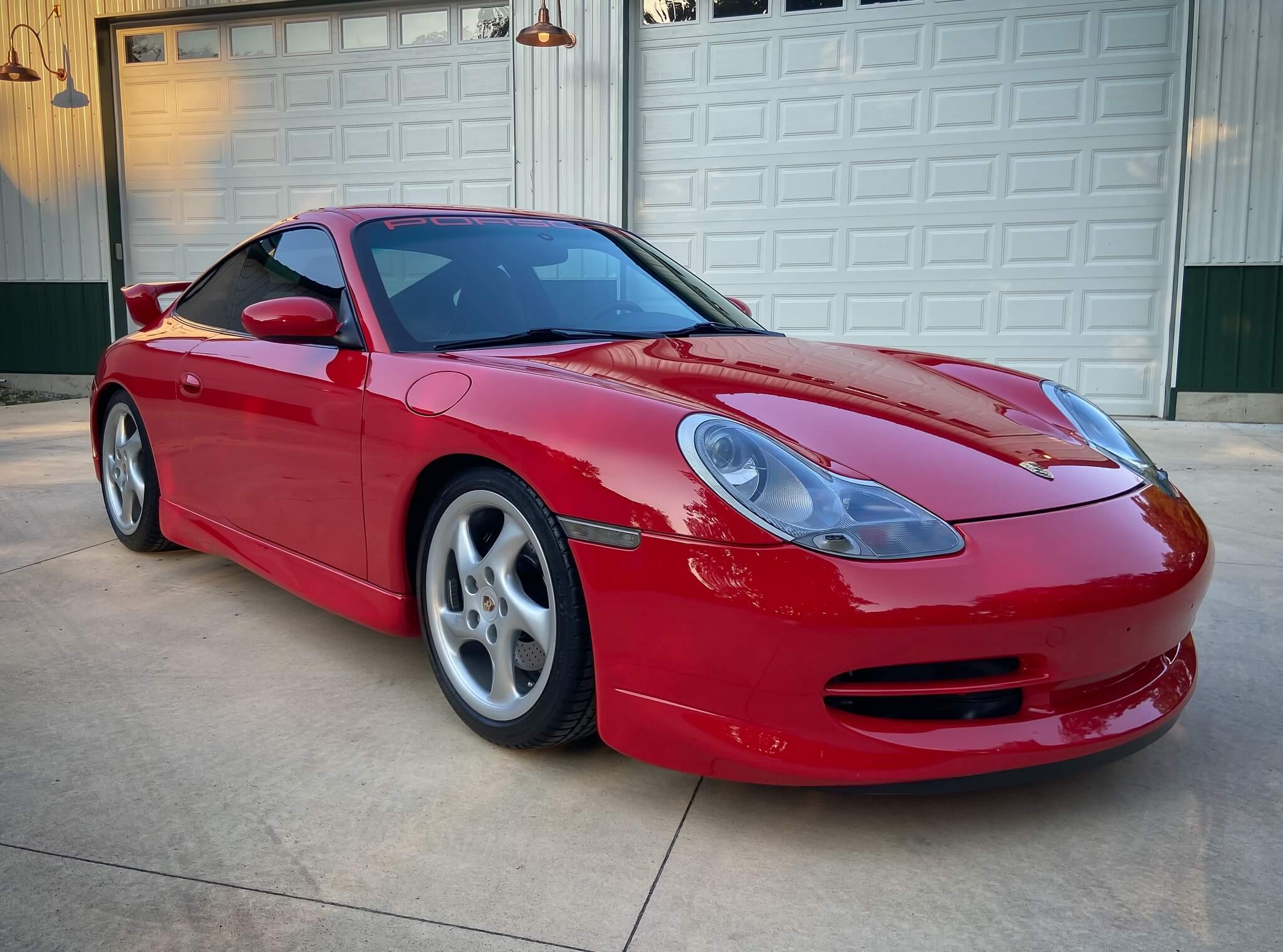 Now available for auction is this 2001 Porsche 996 Carrera Coupe finished in Guards Red over a black interior with leather seats.  This Carrera came factory optioned with a 6-speed manual transmission, 18” Turbo-look wheels, and the GT Package (P06) which includes stainless steel exhaust pipes, Sport Suspension, and the exterior Aerokit Package.  It has also been upgraded under previous ownership with an Ohlins coilover suspension, Elephant Racing camber plates, a Pioneer sound system, and an Agency Power exhaust system.  A major service was completed in August of 2016 which included an LN Engineering IMS bearing upgrade.  Having spent time in Virginia, Oregon, and Arizona, before being acquired by the current owner in Ohio, this nicely appointed 996 Carrera is now being offered for auction with just over 31k miles showing on the odometer. 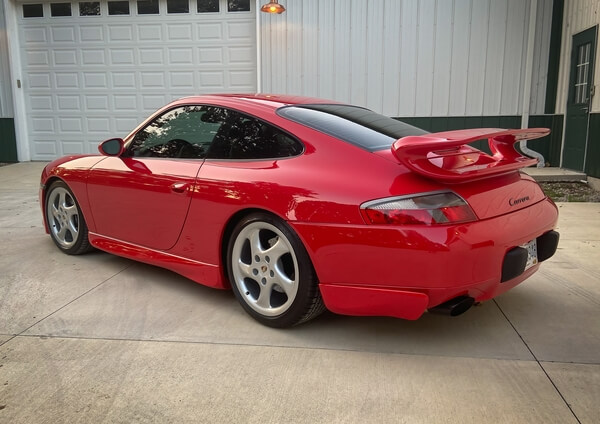 This 996 is finished in Guards Red and was configured with the GT Package at an additional cost of $9,940. This package adds Exclusive stainless steel exhaust pipes as well as the Aerokit Package consisting of a front spoiler, flared rocker panels, rear bumper side fins, and a GT3-style rear wing.  Clear tinted front lenses were added during previous ownership and the seller reports minor signs of road-going wear on the lower front bumper, detailed images are provided in the photo gallery along with paint meter readings and a clean CARFAX report.  This 996 came optioned with 18” Turbo-look light-alloy wheels with colored Porsche center crests.  These wheels come dressed in Michelin Pilot Sport A/S 3+ tires dated from 2020 and are said to have been mounted within the last 200 miles. 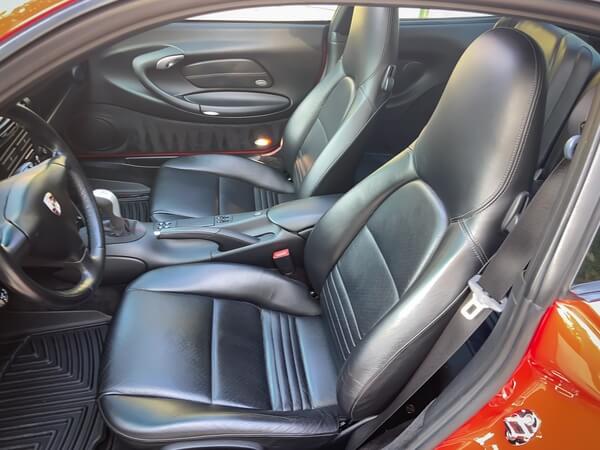 Inside, you will find a well-kept black interior with optional leather front and rear seats, a three-spoke leather steering wheel, and the Comfort Package which adds power-adjustable front seats with position memory.  The optional Technic Package also adds Bi-Xenon headlights, headlamp washers, a sound system, onboard computer, and CD radio.  Other options include the Heated Front Seats Package, self-dimming mirrors with an integrated rain sensor, and black carpet floor mats with Porsche lettering.  An upgraded Pioneer sound system has been installed along with an Alcantara shift knob and matching shift boot.  WeatherTech front floor liners are said to accompany the sale along with the original Porsche radio. 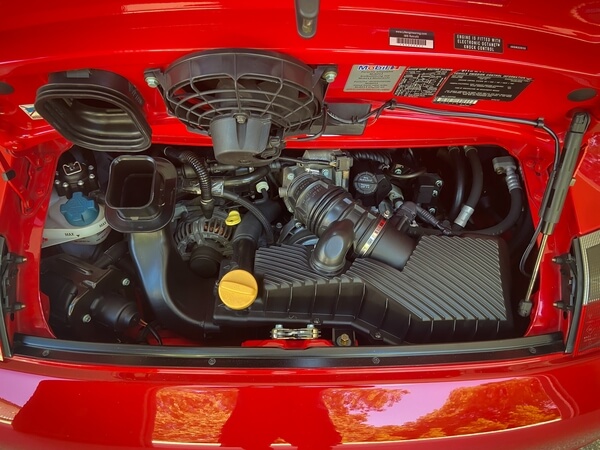 This 996 Carrera is equipped with a naturally aspirated 3.4L flat-six engine rated at 296 HP and 258 lb.-ft of torque stock.  Power is fed to the rear wheels by way of a 6-speed manual transmission.  Porsche Stability Management (PSM) came optioned from the factory, and the original Sport Suspension included with the GT Package was swapped out in favor of Ohlins coilovers by a previous owner.  Other performance upgrades installed during previous ownership include Elephant Racing camber plates and an Agency Power exhaust system.  The performance upgrades were reportedly installed at 30,534 miles and the original exhaust system is said to accompany the sale.  A major service was also completed in August of 2016 including an LN Engineering dual-row IMS bearing upgrade, a new rear main seal, a new clutch, and replacement of the coolant expansion tank.  There are no outstanding service items reported at this time and the seller confirms all gauges and accessories to be fully functional. Images of the undercarriage are provided in the gallery. 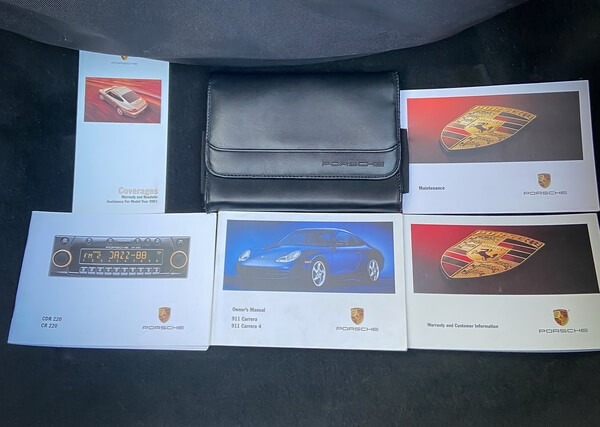 This sale will include the original owner's manuals, three keys, a toolkit, spare tire, original mufflers, original radio, and a clean title.  With low miles, rare factory options, and a host of tasteful upgrades, this 996 Carrera is just waiting for its next owner to get behind the wheel and enjoy.