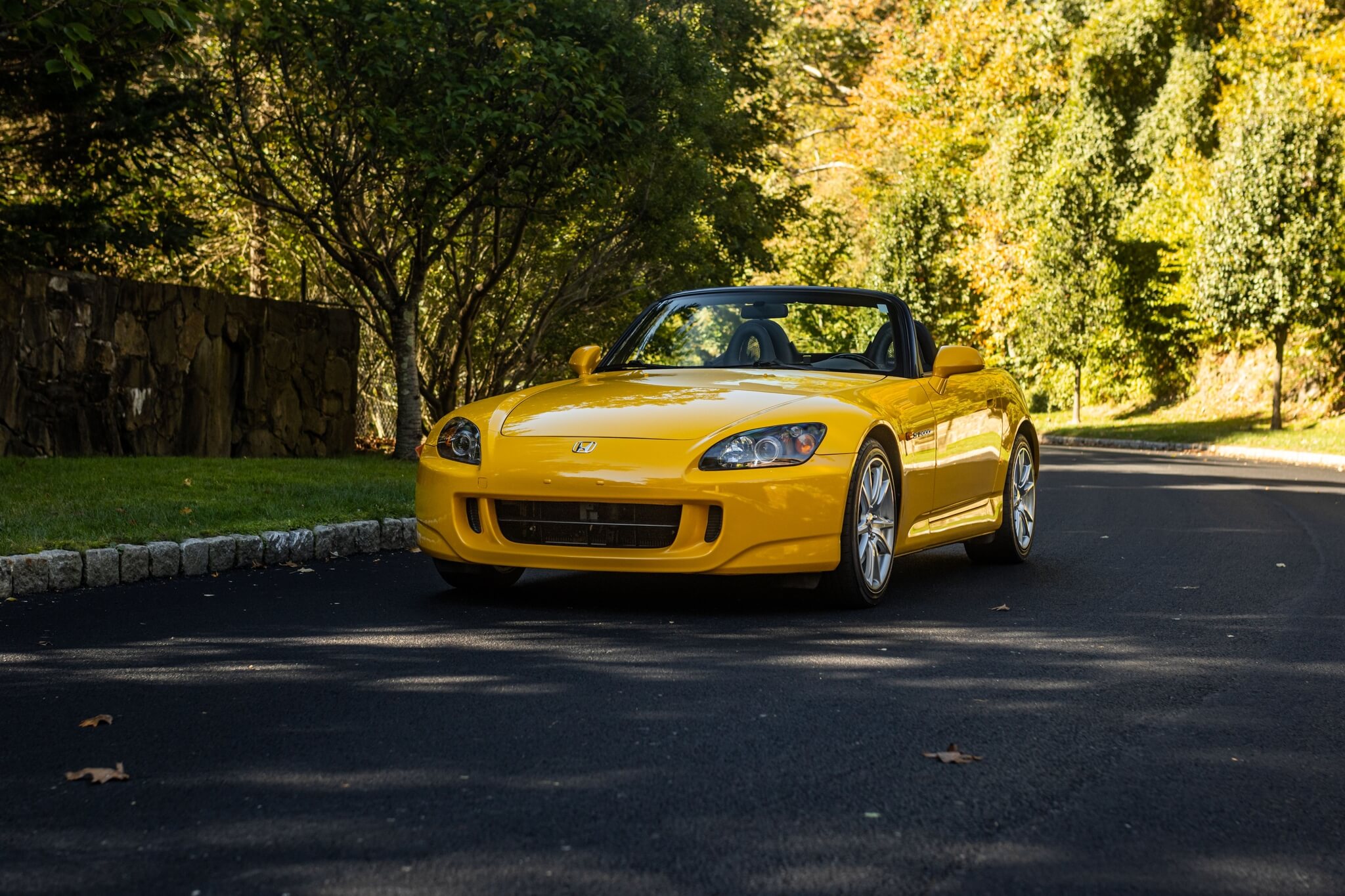 Now available for auction is this 2005 Honda S2000 AP2 finished in Rio Yellow Pearl over black.  Debuted in 2004 with considerable updates, the second generation of Honda’s advanced S2000 sports car was given the chassis designation of AP2 and featured a retuned suspension, new front and rear bumpers, carbon fiber gearbox synchronizers, and a larger 2.2L engine.  This 2005 example was recently acquired by the seller from its original owner out of Ohio.  Remaining true to its original specifications while showing just over 20k miles on the odometer, this beautifully presented Honda S2000 AP2 has been dealer-maintained and is now being offered for auction by its seller out of New York. 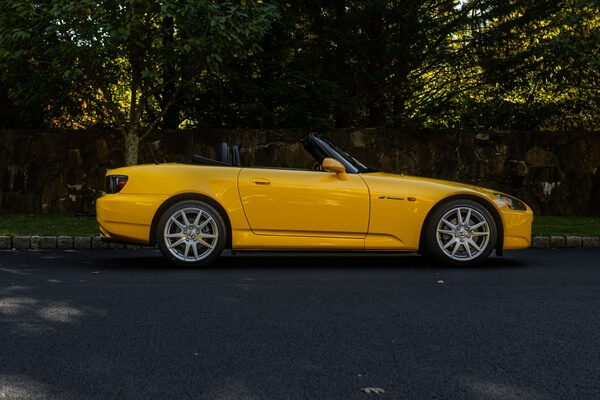 This S2000 comes finished in Rio Yellow Pearl with a black convertible top.  The AP2 generation debuted revised front and rear bumpers, new LED taillights, redesigned headlight assemblies, and oval-shaped exhaust tips.  The finish is described to have been well preserved with only a few small touched-up chips throughout the exterior and some scrapes beneath the front bumper.  A small crack is also noted in the windshield as well as light curb rash on the driver-side wheels. This S2000 is said to have spent its life garage-kept under the care of an elderly woman who had driven the car sparingly on nice days. The seller notes that all 10 VIN tags remain in place and that the car was professionally paint-corrected and treated with IGL Kenzo ceramic coating in October of 2021.  Detailed images are provided in the gallery along with a clean CARFAX report.  This AP2 rides on factory 17” alloy wheels dressed in their original Bridgestone Potenza RE050 tires. 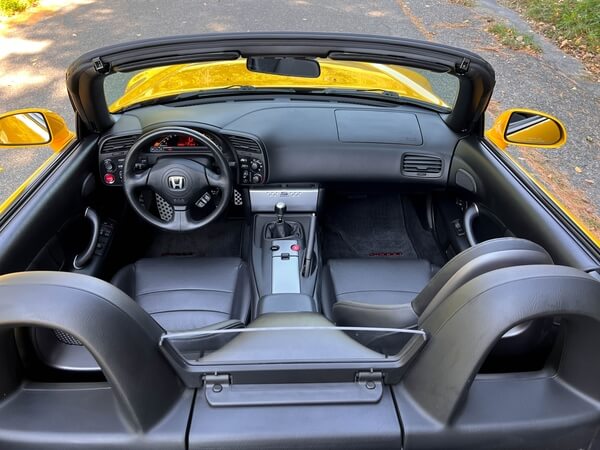 Inside, the driver is greeted by a well-kept black interior with leather-trimmed seats, aluminum pedals, and digital instrumentation.  Standard features include a 4-speaker sound system with an AM/FM/CD radio, air conditioning, power windows and door locks, cruise control, and a front center console.  The seller notes some light creasing on the seat bolsters and describes the soft top straps to be worn, although a set of new soft top straps are said to accompany the sale.  All gauges and accessories are reported to be fully functional. 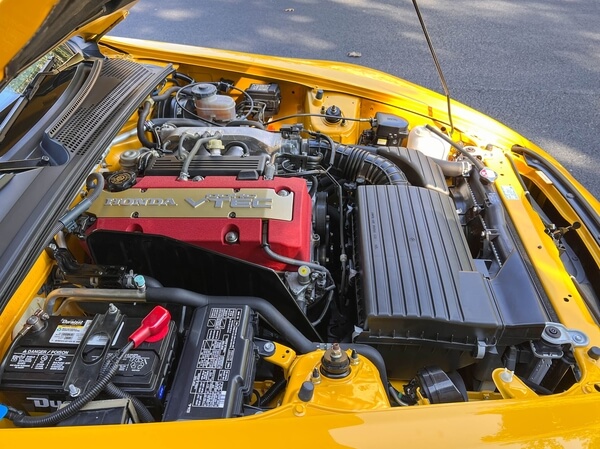 The AP2 generation received an updated version of the F20C inline 4-cylinder DOHC engine from the original S2000 with increased stroke length and a displacement of 2.2L.  Designated as F22C1, this enlarged engine carried over V-TEC variable valve timing technology and offers an output of up to 240 HP and 162 lb.-ft of torque.  The AP2 also received an updated 6-speed manual gearbox with modified gear ratios and upgraded carbon fiber synchronizer rings.  Other features include a limited-slip differential, variable-assist rack and pinion steering, and four-wheel double-wishbone independent suspension.  The undercarriage received a protective coating under the original owner’s care and CARFAX shows a lifetime of service carried out by the original selling Honda dealership.  An oil change, brake fluid flush, and maintenance inspection were completed by a Honda dealer in August of 2021 at 19,506 miles. 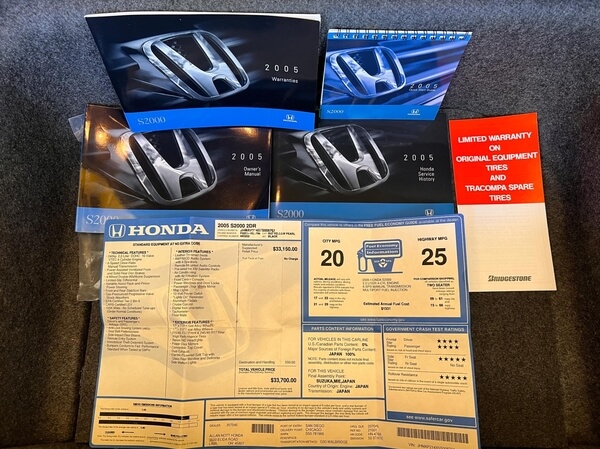 This sale will include a set of two master keys and remotes, one spare key, the original window sticker, owner's manuals, and a clean title. Highly original and with low miles, this one-owner 2005 Honda S2000 makes an excellent investment as well as a fine addition to any car collection.