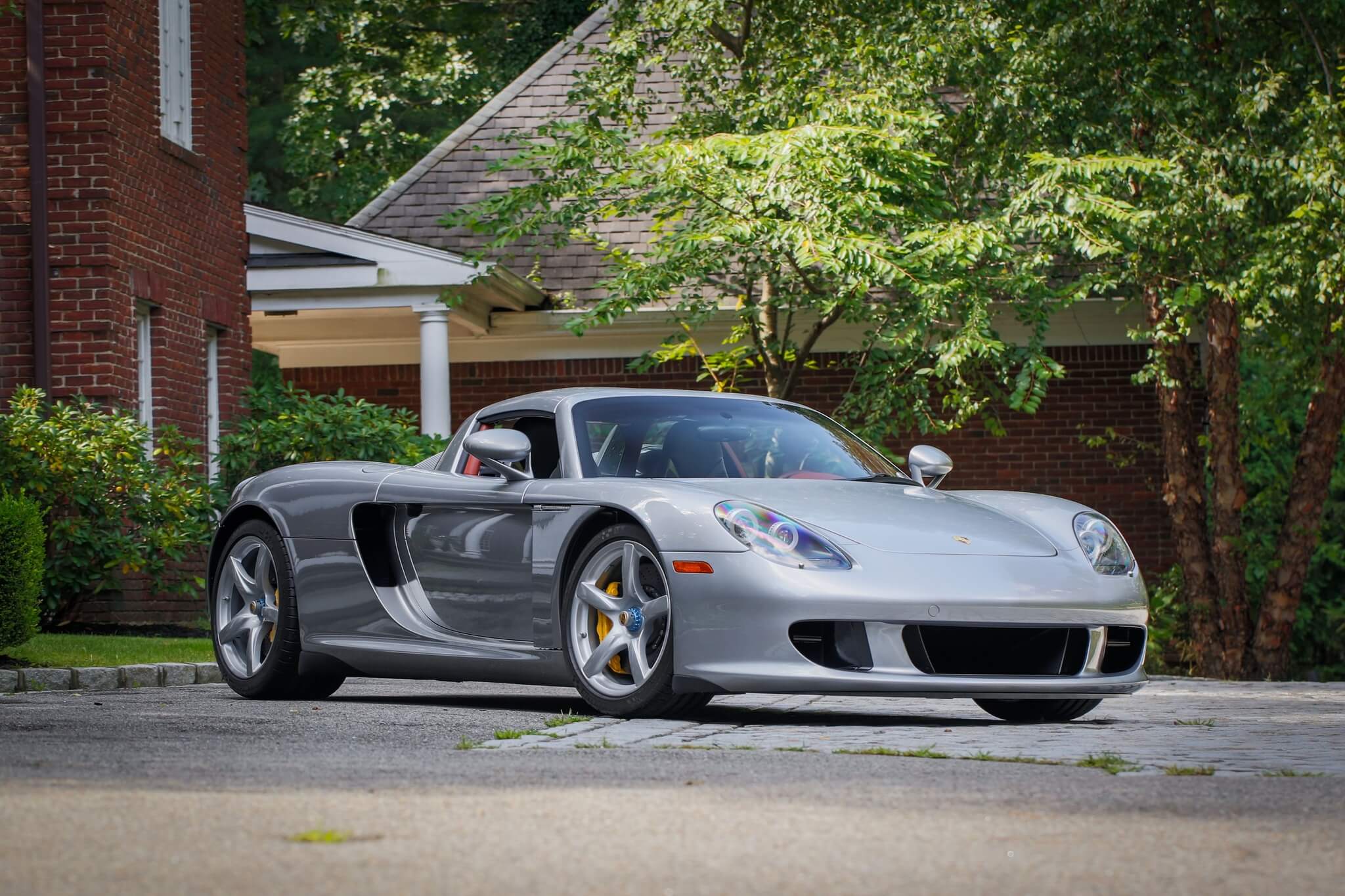 It is our pleasure to offer this 2005 Porsche Carrera GT.  One of the most revered and celebrated supercars in automotive history, the Carrera GT was first debuted as a concept car at the 2000 Paris Motor Show featuring a V10 engine carried over from a Le Mans prototype race car design.  Following an overwhelmingly positive response, Porsche began to produce a limited series of fully developed road-legal versions in 2004 at their new manufacturing facility in Leipzig before production ceased in May of 2006 with approximately 1,270 examples built, of which 644 were sold in the United States. 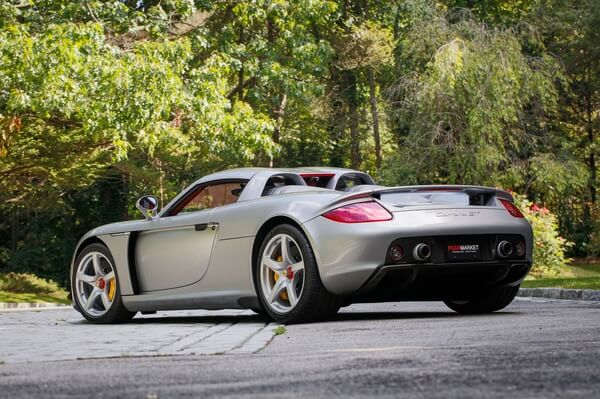 Originally delivered through Porsche of Bellevue in Washington, this 2005 example (#1076) was ordered in traditional GT Silver Metallic paint over a Custom Tailored interior featuring a special combination of Terracotta and Black leather.  The car would remain under the care of its original owner up until 2013 before changing hands once more and eventually being acquired by the current owner in 2016.  It has since been part of a private car collection and museum in New York and has received a major engine-out service to ensure proper mechanical order.  Easily one of the finest examples available, this collector-grade 2005 Carrera GT is now being offered for auction by its seller out of New York while showing just over 2,500 miles on the odometer. 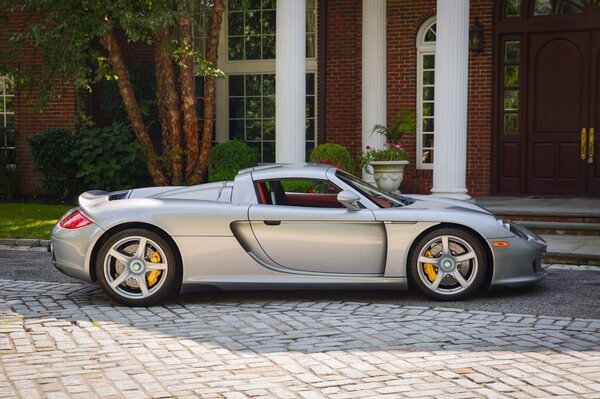 Centered around an advanced carbon fiber monocoque chassis, the bodywork of this Carrera GT comes finished in the debut color of GT Silver Metallic. The styling of the Carrera GT is characterized by large air intakes, an electronically operated rear spoiler, and a double-humped carbon fiber engine cover with silver mesh grilles.  The distinctive design language of the Carrera GT would come to influence the styling of Porsche’s later models such as the 987 and 997. 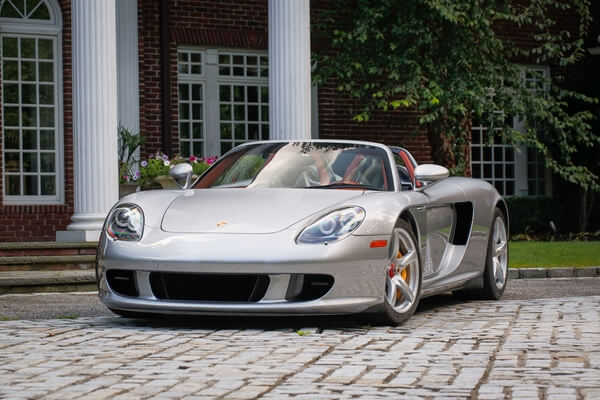 Under the current ownership, clear paint protection film was applied over the front end up to the front fenders.  The finish is described to have been preserved in impeccable original condition, detailed images are provided in the photo gallery along with a clean CARFAX report.  The factory forged magnesium wheels are incredibly light and utilize race-derived center-locking hubs. Measuring 19” front and 20” in the rear, these wheels come dressed in a set of Michelin Pilot Super Sport tires which were mounted by Porsche of Huntington in 2017 at 2,184 miles.  The tires show date codes from 2015. 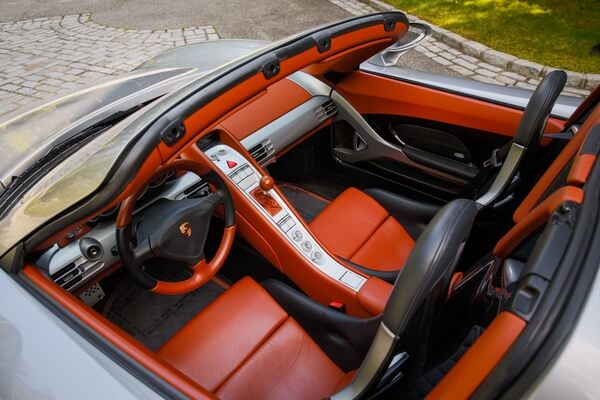 The driver is situated within a beautifully appointed Leather to Sample interior trimmed in Terracotta with black leather bucket seats featuring deviated centers.  This example received an optional thickened three-spoke leather steering wheel, a thicker armrest with decorative stitching, and a carbon fiber handbrake.  Other features include air conditioning, a Porsche Online Pro CD radio, and carpet floor mats.  The nostalgic beechwood shift knob pays homage to the wooden knob used in the legendary 917 Le Mans race car.  Ahead of the steering wheel sits a traditional Porsche instrument cluster housing a central 10k-RPM tachometer flanked by a 220 MPH speedometer and gauges for coolant temperature, fuel level, oil temperature, and oil pressure. The impeccable condition of the interior reflects a high level of care and sparing use. 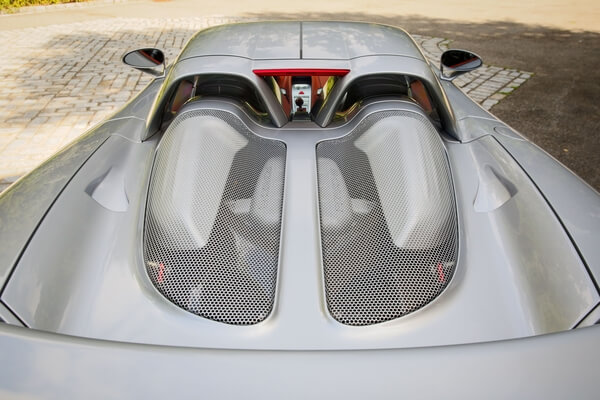 Development of the Carrera GT’s engine began as a secret project commissioned by the Footwork Formula One racing team in 1992.  The design was eventually resurrected in anticipation of a new Le Mans prototype to replace the 911 GT1.  As Porsche redirected its efforts toward new developing roadgoing models, the Le Mans prototype project was abandoned and its V10 engine was reallocated for the Carrera GT super car. 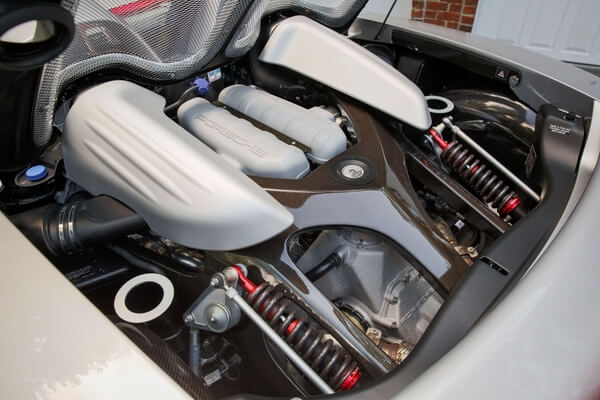 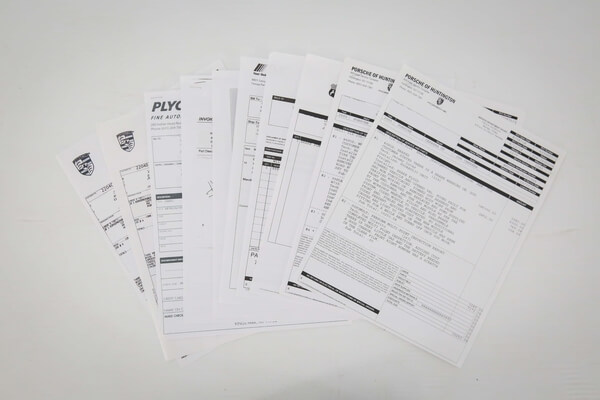 This sale will include an assortment of records, books and manuals enclosed within their Porsche pouch as well as a spare key.  Among the last of the analog super cars, the Carrera GT remains one of the most coveted automobiles ever made.  Specially appointed from the factory and preserved in outstanding museum-quality condition, this 2005 example would become a crowning jewel in any world-class car collection.