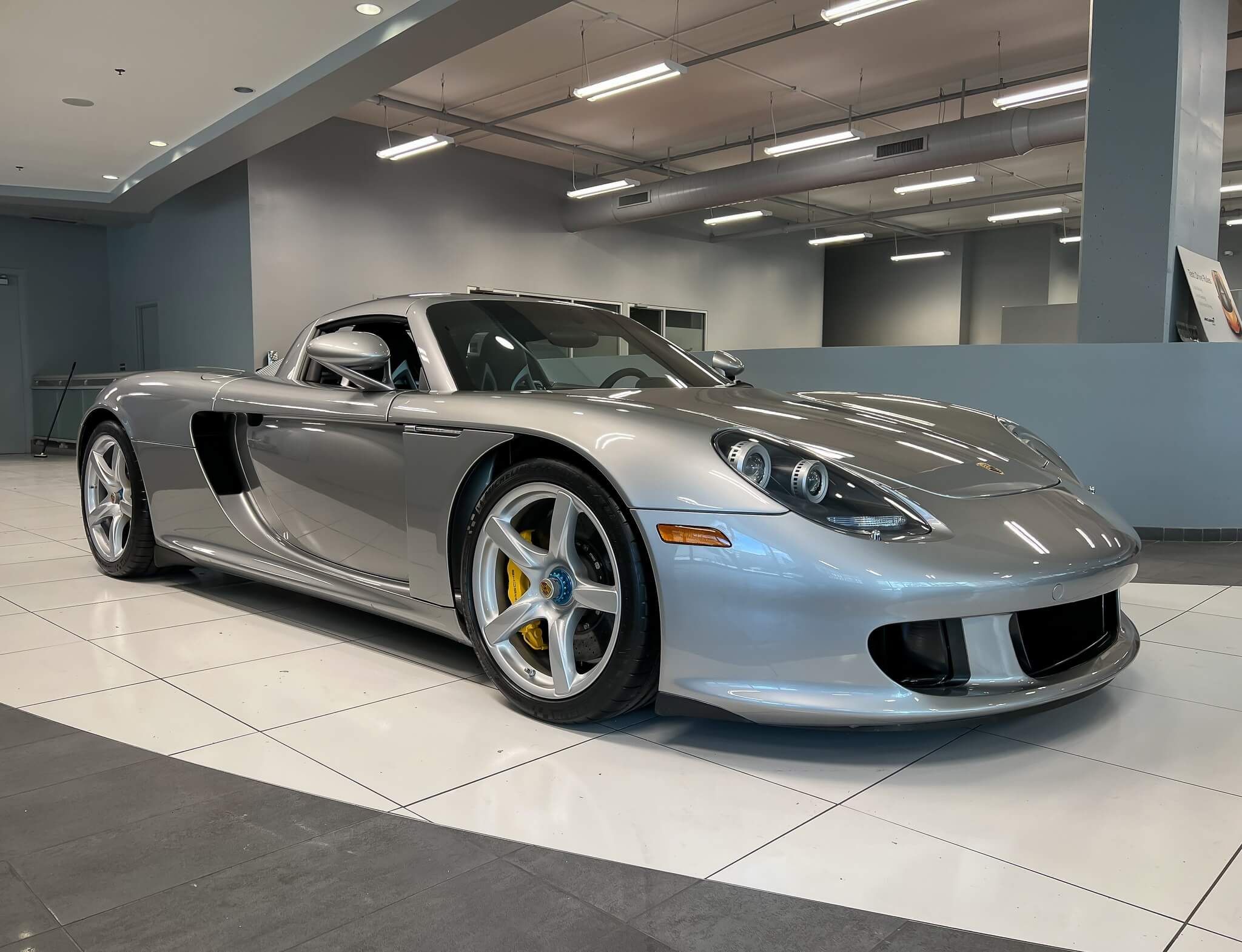 Now available for auction is this 2005 Porsche Carrera GT finished in GT Silver Metallic over Dark Grey leather.  Among the last of the analog supercars, the Porsche Carrera GT remains an automotive icon and is commonly regarded as one of the greatest driver’s cars of all time. An engineering marvel, the Carrera GT was first debuted as a concept car at the 2000 Paris Motor Show featuring a V10 engine carried over from a Le Mans prototype race car design. Porsche subsequently produced a limited series of fully developed road-legal versions in 2004 at their new facility in Leipzig before production ceased in 2006 with approximately 1,270 examples built, of which only 644 were sold in the United States.  This 2005 example, chassis #0855, was delivered through a dealer in Texas and has remained part of the original owner’s collection since new.  Recently treated to a preventative engine-out service at a cost of nearly $50k, this exceptionally well-preserved Carrera GT has accumulated less than 400 miles and is now being offered for auction by its seller out of Illinois accompanied by the original books, tools, and luggage. 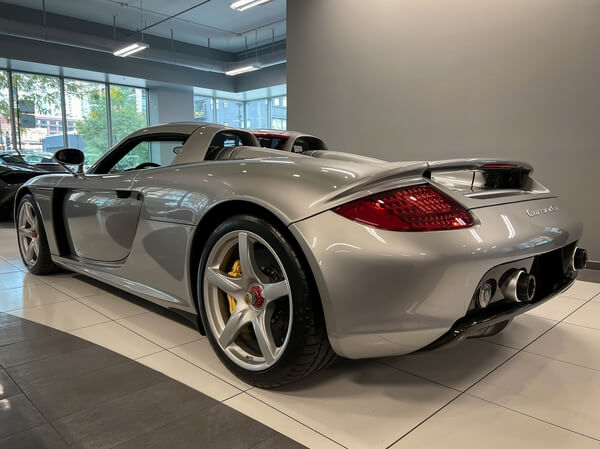 Laid over a carbon fiber monocoque chassis, the bodywork of the Carrera GT is characterized by large air intakes, an electronically operated rear spoiler, and a double-humped carbon fiber engine cover with silver mesh grilles.  This example was ordered in the debut color of GT Silver Metallic and has been preserved with a layer of clear paint protection film over the full front end and mirror covers.  The lightweight forged magnesium 19"/20" wheels feature center-locking hubs and come dressed in a set of Michelin Pilot Super Sport tires dated from 2016 in front and 2018 in the rear. 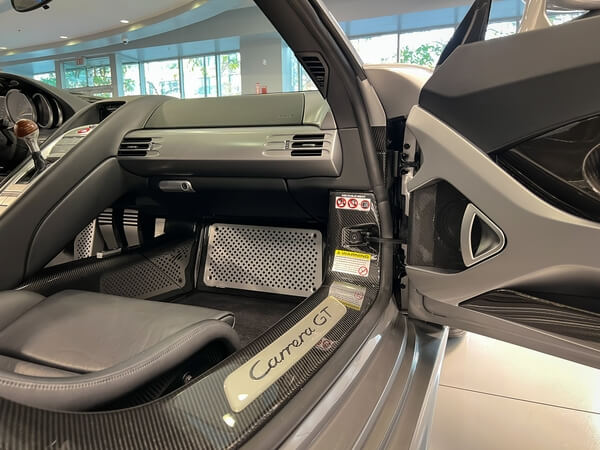 The cabin is trimmed in Dark Grey leather accented by a silver dashboard and center console, exposed carbon fiber, and a nostalgic beechwood shift knob paying homage to the legendary 917 Le Mans race car.  The pedals and passenger floorboard are made from aluminum and the removable roof panels are lined with quilted Alcantara.  Factory equipment includes 10mm raised bucket seats, air conditioning, a Porsche Online Pro CD radio, and a matching leather luggage set. Ahead of the steering wheel sits a traditional Porsche instrument cluster housing a central 10k-RPM tachometer flanked by a 220 MPH speedometer and gauges for coolant temperature, fuel level, oil temperature, and oil pressure.  The seller describes the cabin to remain like new with all gauges and accessories functioning properly. 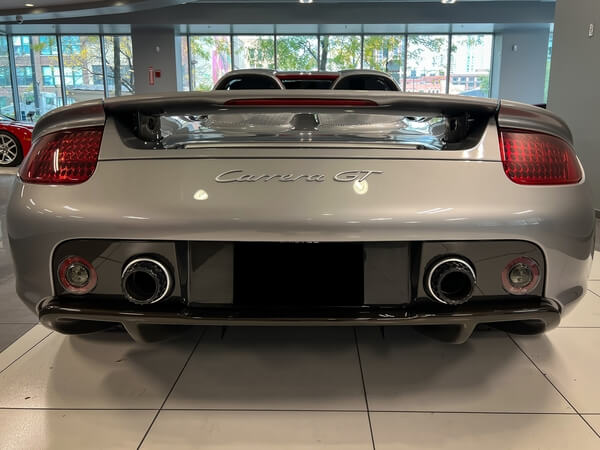 The Carrera GT’s engine was originally developed as a secret project commissioned by the Footwork Formula One racing team in 1992.  After being shelved for several years, the design was eventually revived in anticipation of a new Le Mans prototype to replace the 911 GT1.  As Porsche redirected its efforts toward new developing new roadgoing models like the Cayenne, the Le Mans prototype project was abandoned and its V10 engine was reallocated for the Carrera GT supercar. 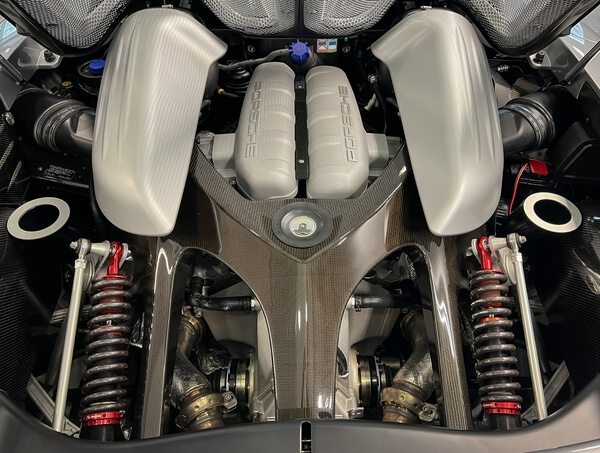 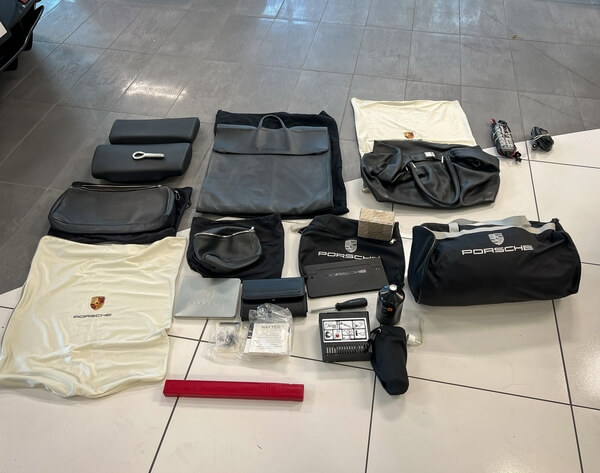 This sale will include a set of keys, the original owner’s manuals, toolkit, car cover, luggage set, and a clean title.  The seller notes that the title for the car had been previously reassigned from the owner's business, thus two owners are shown on the CARFAX report. One of the quintessential supercars of the 2000s, this incredibly low-mileage Carrera GT makes a fine addition to any world-class car collection.  Do not let this very special opportunity pass you by.