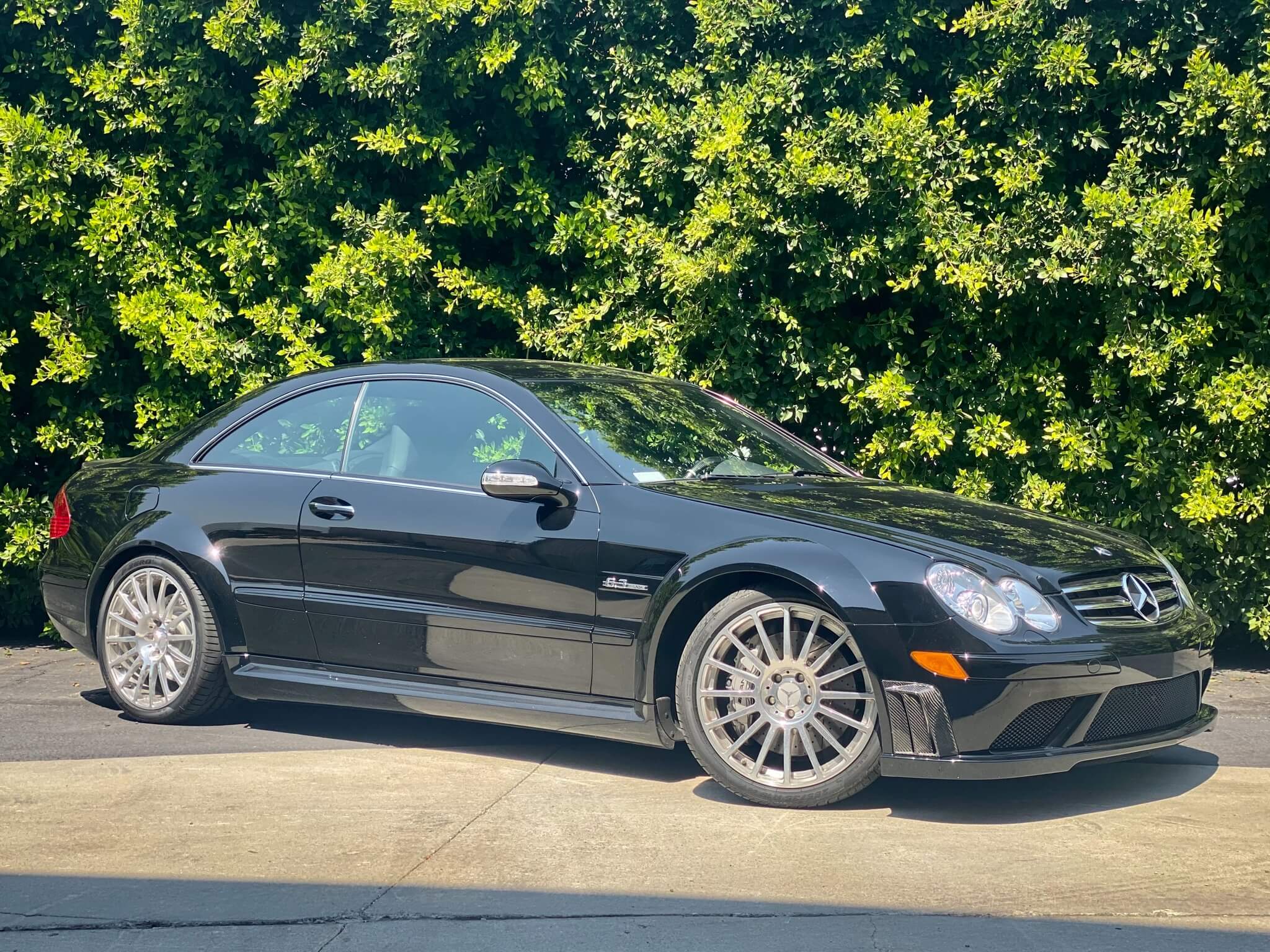 We are pleased to present this 2008 Mercedes-Benz W209 CLK 63 AMG Black Series, finished in Black over a Black Nappa leather interior.  Based on the modified CLK 63 safety car used in the 2006-2007 Formula One season, the CLK 63 Black Series was endowed with aggressive fender flares, a hand-built 6.2L V8, and motorsport-derived technology including carbon-fiber aerodynamics, a limited-slip differential, chassis bracing, a fully adjustable coilover suspension system, and larger brakes.  Manufactured between 2007-2009, the Black Series saw only 500 examples produced worldwide, of which approximately 350 made their way to the United States. This 2008 example was acquired by the seller in September of 2021 from the previous owner who had cared for the car since 2016. This rare and highly collectible CLK 63 Black Series is now being offered for auction out of California showing approximately 4,700 miles on the odometer. 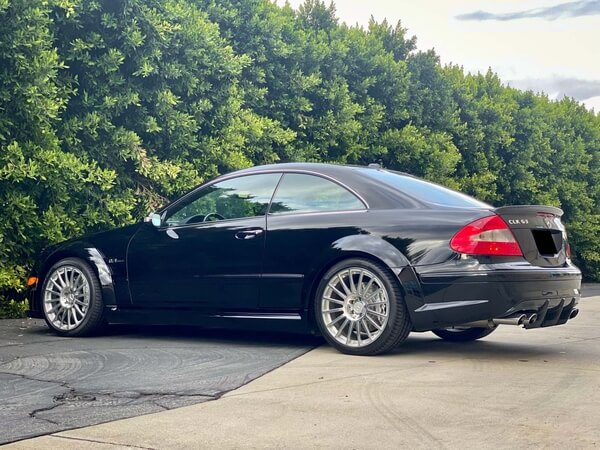 This CLK 63 is finished in Black (040U), one of five color choices offered for the Black Series. Compared to a standard CLK 63, this special edition can be identified by its unique DTM-inspired bodywork including wide carbon-fiber fender flares, a carbon-fiber front apron, a carbon-fiber rear diffuser, and a carbon-fiber trunk lid spoiler. The carbon-fiber air outlets in the front wheel arches provide airflow to the auxiliary transmission and engine-oil coolers. The track of the Black Series is almost 3” wider in the front and 2.6” wider in the rear compared to a standard CLK, and the car also weighs around 100 lbs. less. Silver painted brake calipers with black AMG script can be seen through the specialized 19” forged alloy multi-spoke wheels, which are currently mounted with Pirelli P-Zero tires showing date codes from 2018/2019. The condition of the exterior is said to reflect a lifetime of meticulous care and indoor storage.  The seller does note an imperfection on the rear diffuser, detailed images are provided in the gallery along with a clean CARFAX report. 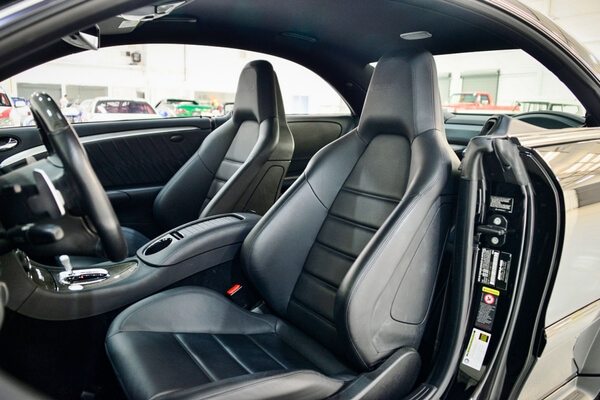 The interior is trimmed in black Nappa leather with deeply bolstered power-adjustable bucket seats and matching door panels. The center stack, center console, and instrument cluster all feature high-gloss carbon-fiber trim while lightweight black carpeting lines the floor.  The rear seats were omitted from the Black Series for weight savings.  Other details include AMG-branded floor mats, drilled aluminum pedals, and stainless-steel AMG door sills.  The driver is situated in front of a 200-MPH speedometer, an 8k-RPM tachometer, an analog clock, and gauges for fuel level and coolant temperature. Carbon fiber trim has been added to the steering wheel and the seller states that a new OEM Black Series steering wheel will be installed prior to sale. An image of the new steering wheel can be found in the gallery. 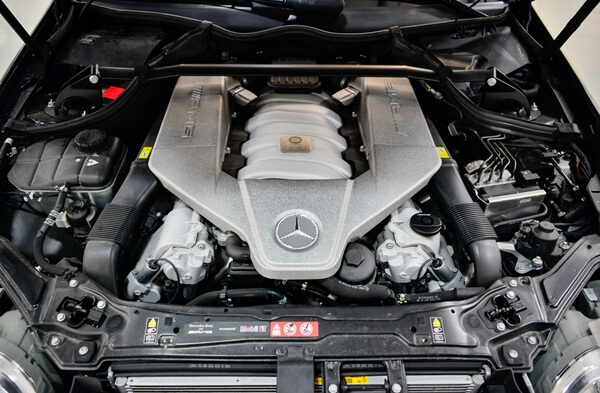 Under the hood, the CLK 63 Black Series features a hand-built 6.2L M156 V8, which produces up to 500 HP and 465 lb.-ft of torque.  Power is delivered to the rear wheels through Mercedes’ SpeedShift 7G-Tronic seven-speed automatic transmission and a limited-slip differential. The Black Series can accelerate to 60 MPH from a standstill in approximately 4.2 seconds before reaching a maximum speed electronically governed at 186 MPH. Enlarged intake ducts, reprogrammed software, and a low-restriction sport exhaust help the Black Series gain 25 HP over a standard CLK 63 AMG. The Black Series comes factory equipped with a fully adjustable coilover suspension system as well as 6-piston front and 4-piston rear monobloc brake calipers with cross-drilled and vented rotors. Other performance features include speed-sensitive power steering and chassis bracing across the engine bay and trunk. The seller has included records of the most recent Mercedes-Benz “B-service”, which includes fluid and filters changes as well as a full inspection of the vehicle’s engine, suspension, brakes, and electronics. 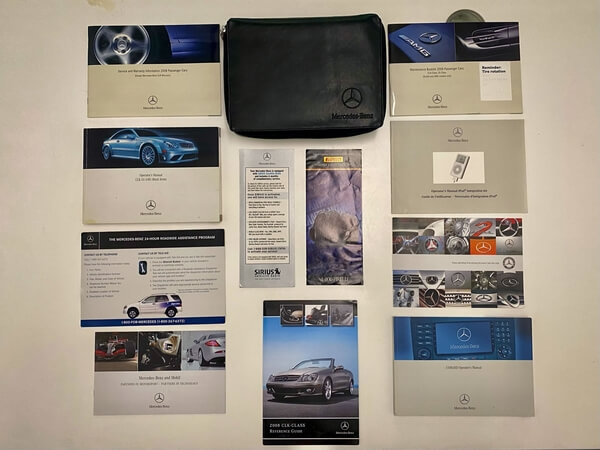 This sale will include a set of two keys, the original owner's manuals, a first aid kit, a battery charger, a new OEM steering wheel, and a clean title. A visceral driver’s car showcasing motorsport-derived styling and performance, the CLK 63 Black Series remains one of the most sought-after and exclusive Mercedes-Benz AMG models of all time.  Do not miss your chance to add this beautifully presented 2008 example to your collection.