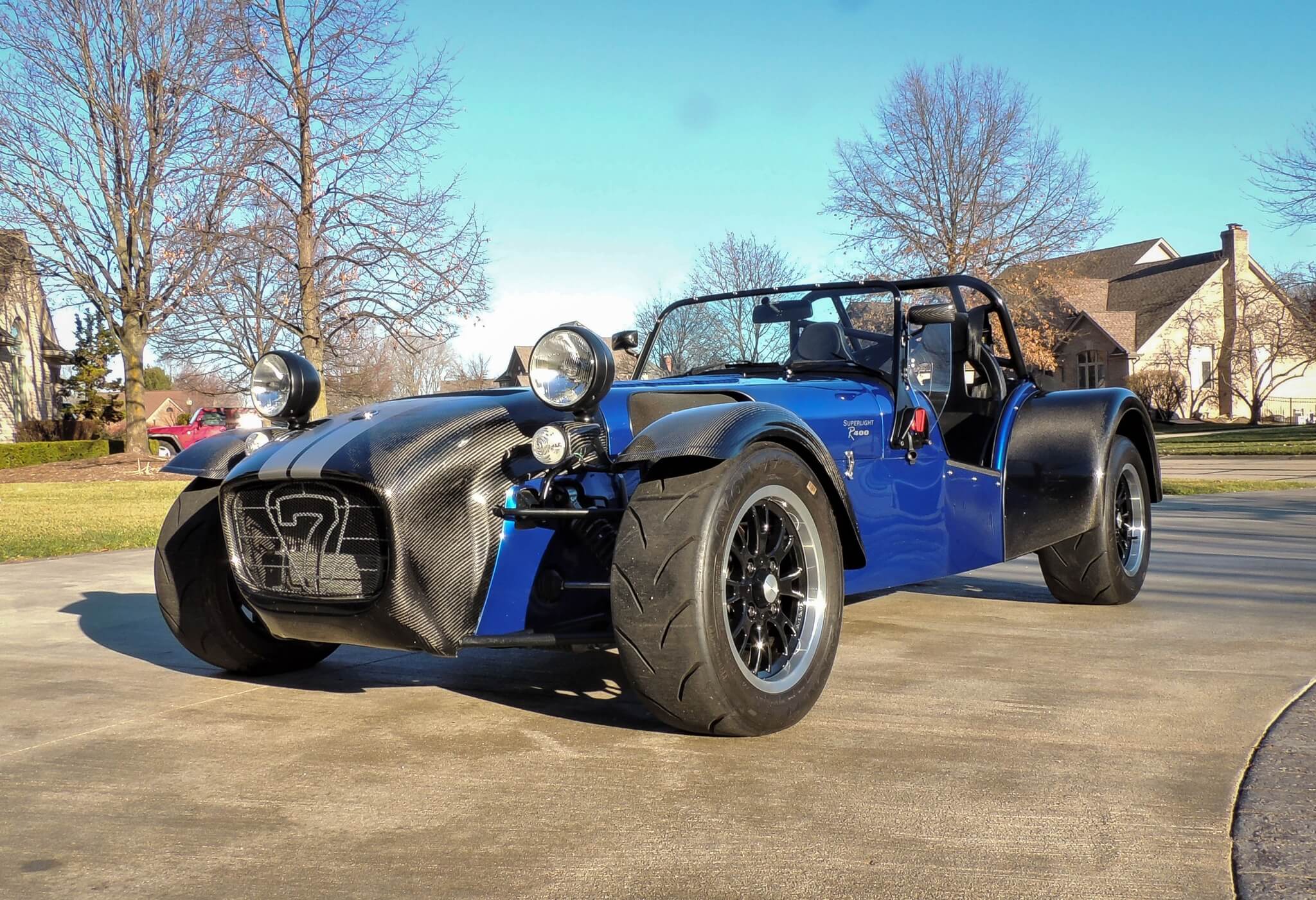 The Caterham Seven is a super-lightweight sports car produced by Caterham Cars of England, based on the Lotus Seven produced from 1957-1972. This 2010 example was imported by LeBrun Motors of New York and subsequently assembled in 2011. Originally specified as a Lightweight R400 model on the original S3 chassis, the original owner spent over $20k upgrading this example to R500 specifications including an exposed carbon fiber nosecone, fenders, dashboard, mirrors and turn signal nacelles along with an R500 exhaust system, roller throttle bodies, a Piper Cross air filter, 13” Caterham wheels, an extra-height FIA roll bar, Kevlar Tillet carbon-backed racing seats, a factory De Deon rear suspension, and a carbon fiber windscreen. This Caterham won the "Design of Distinction" award at the 2022 "Eyes on Design" Concours, celebrated on the grounds of the Henry Ford Estate in Grosse Pointe Shores MI. Benefitting from the recent replacement of the clutch master and slave cylinders, this 2010 Caterham Seven Lightweight R400 S3 is now being offered at auction by its seller out of Michigan, showing just under 5,500 miles on the odometer. 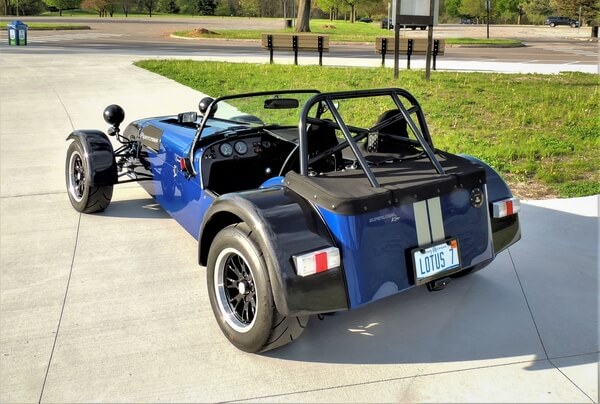 The exterior is finished in Chrysler Daytona Blue Metallic (B6) with a gloss clear-coated exposed carbon fiber nosecone, fenders, mirrors, and turn signal nacelles. Equipment includes a vented hood, an extra-height FIA rollbar, white-lensed turn signals, LED headlights, LED third brake lights, an aero-fill fuel cap, an external kill switch, a full-size windscreen with windshield wipers, a mohair tonneau cover and passenger seat cover, and a polished passenger-side exhaust system. The seller reports some minor road-going wear to the bottom of the vehicle, detailed images are provided in the gallery. The original 15” wheels have been swapped for a set of 13” Caterham wheels, which are mounted with Avon ZZ tires. The original 15” wheels are said to accompany the sale, mounted with Avon CR500 tires showing date codes from 2008. A carbon fiber windscreen, the original nosecone, and the four original fenders are said to be included as well. 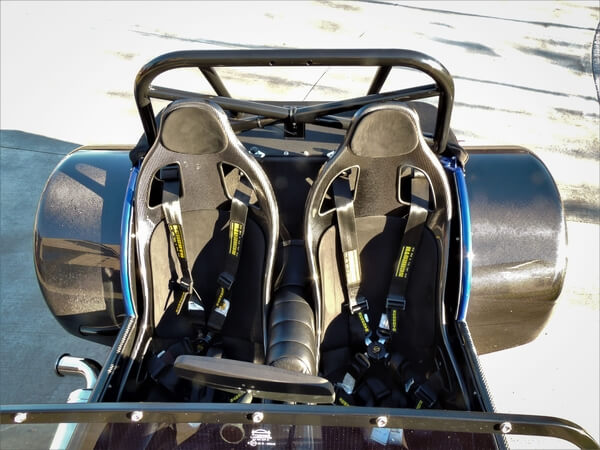 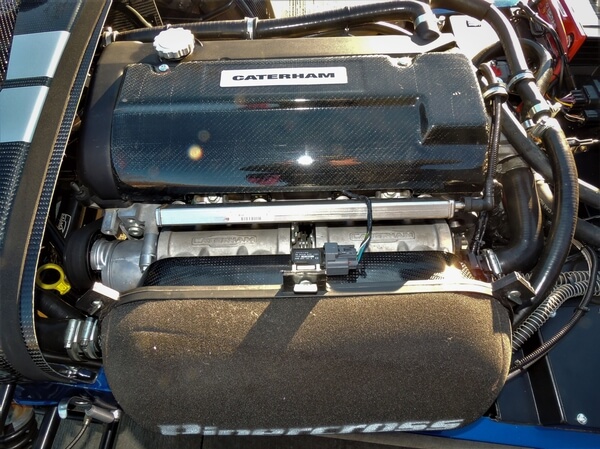 This Caterham Seven Superlight R400 S3 is powered by a 2.0-liter Ford Duratec inline-four, with improved head flow, a strengthened bottom end, high-lift camshafts, and a performance ECU. Modifications include a Piper Cross air filter, upgraded roller throttle bodies, and a cat-less polished stainless R500 exhaust system. As much as 230 HP is sent to the rear wheels through a close-ratio 6-speed manual transmission. Weighing just 1,125 lbs., this Caterham Seven is reported to reach 60 MPH from a standstill in around 3 seconds. Performance features include a limited-slip differential, Bilstein 2-way adjustable dampers, and a factory De Deon upgraded rear suspension setup. The seller reports that upon acquisition, a full fluid service was completed with Motul hi-temp brake fluid for the brakes and clutch along with a full inspection and re-torque.. The vehicle was also corner-balanced for a 200 lb. driver. 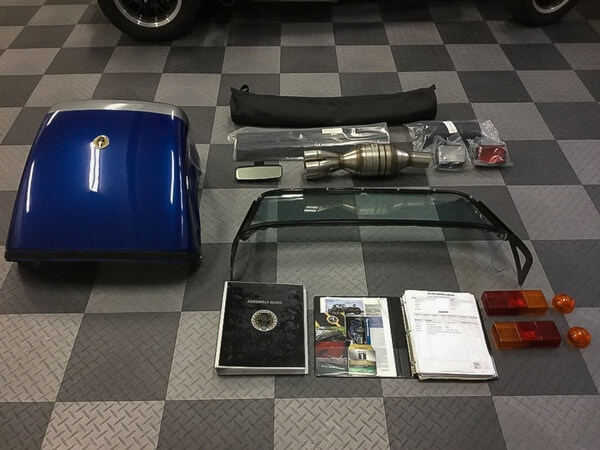