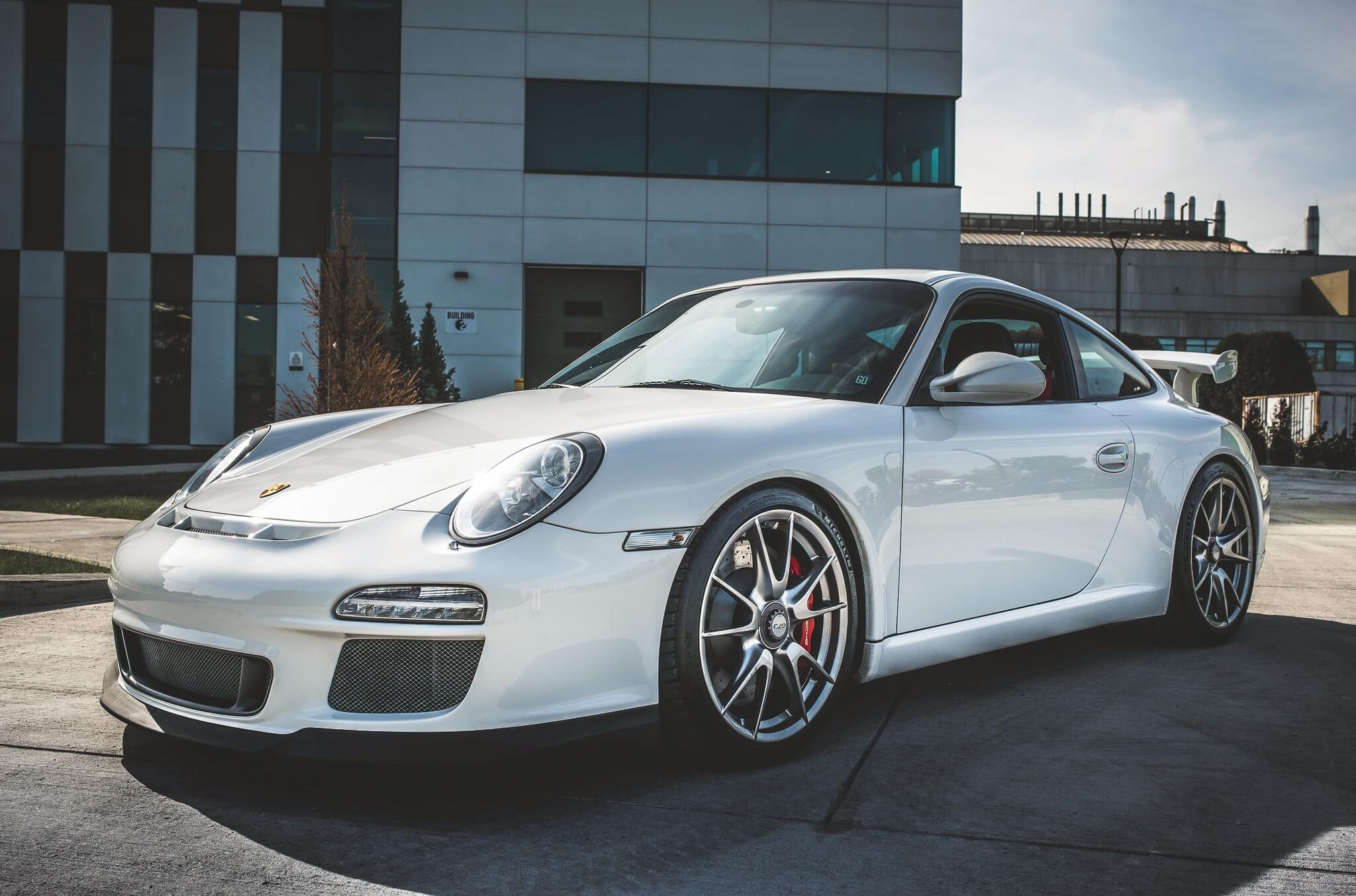 We are pleased to offer this 2010 Porsche 997.2 GT3 finished in Carrara White.  Offered with improved aerodynamics and a larger 3.8L flat-six, the second generation 997 GT3 was the last to use the venerable Mezger engine design and remains one of the rarest and most sought-after Porsches of the modern era.  One of only 58 examples reported to have been sold in Canada, this 2010 GT3 was delivered with options including Dynamic Engine Mounts, the Sport Chrono Package, Interior Carbon Package, Sound Package Plus, heated black leather seats, and more.  It was acquired by the seller as a Certified Pre-Owned vehicle from Porsche Prestige in Montreal in 2013 at approximately 31k kilometers (19k miles).  The car has since been rigorously maintained and upgraded with a single-mass flywheel, 4.0-spec clutch, SharkWerks center muffler delete, and Guard limited-slip differential.  A visceral modern GT-car for the driving purist, this nicely equipped and highly collectible 2010 GT3 is now being offered for auction by its owner out of Canada with just over 69k kilometers (42,875 miles) on the odometer. 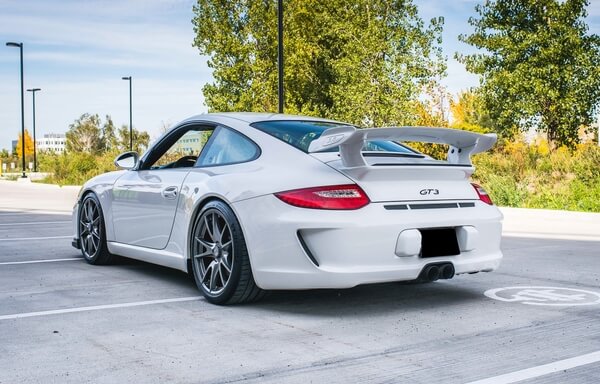 This GT3 comes finished in the nonmetallic shade of Carrara White and is distinguishable as a second-generation version by its updated fascias, front spoiler, LED lighting, revised rear wing, and center-locking 19” aluminum wheels.  The seller notes that the car had been preserved under a full application of Xpel paint protection film throughout their nine years of ownership, which has just been recently removed exposing a well-preserved finish.  Detailed images are provided in the photo gallery along with paint meter readings and a clean CARFAX report.  The factory GT3 wheels come dressed in a set of brand-new Michelin Pilot Sport 4S tires. 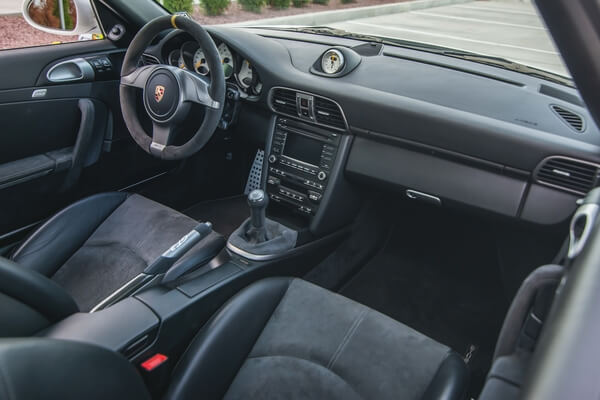 Inside, this GT3 features heated leather Sport Seats with Alcantara inserts and Exclusive seatbelts in Guards Red along with instrument dials in Carrara White, the Interior Carbon Package, and the Sport Chrono Package with a stopwatch dial in Carrara White.  The driver is also supplied with the Sound Package Plus, a Bluetooth phone interface, universal audio interface, and self-dimming mirrors with an integrated rain sensor.  The Alcantara sport steering wheel has been custom reupholstered with increased thickness and a yellow 12 o’clock marking at the top. 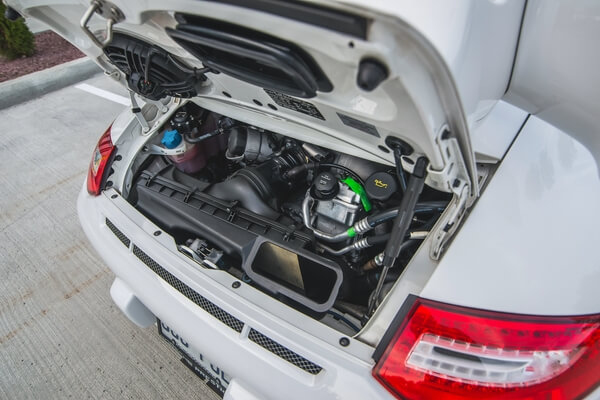 Among the last Porsches to feature the coveted Mezger engine design, this second-generation 997 GT3 carries a naturally aspirated 3.8L flat-six generating up to 435 HP and 317 lb.-ft of torque stock.  The rear wheels are driven through a 6-speed manual transmission which has been upgraded with a single-mass flywheel, lightweight GT3 RS 4.0-spec clutch, and a Guard limited-slip differential.  Optional Dynamic Engine Mounts are factory equipped along with the Sport Chrono Package, and a SharkWerks center muffler bypass has also been installed for increased sound and performance.  Throughout the current ownership, the car has received routine oil and filter changes every 1,500 miles as well as annual transmission and brake fluid flushes.  The car has also received a wheel alignment and new OEM brake rotors front and rear. A DME report is provided in the gallery. 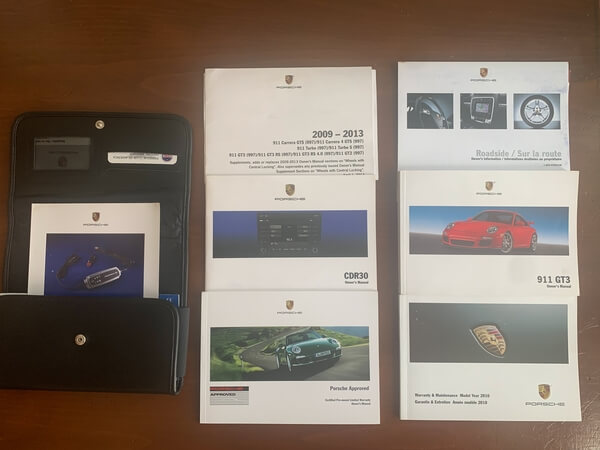 This sale will include a set of two keys, owner's manuals, a Porsche Certificate of Authenticity, and a clean title. Commonly regarded as one of the greatest driving modern Porsche 911s, this tastefully upgraded 997.2 GT3 makes a fine choice for any discerning driver or collector.