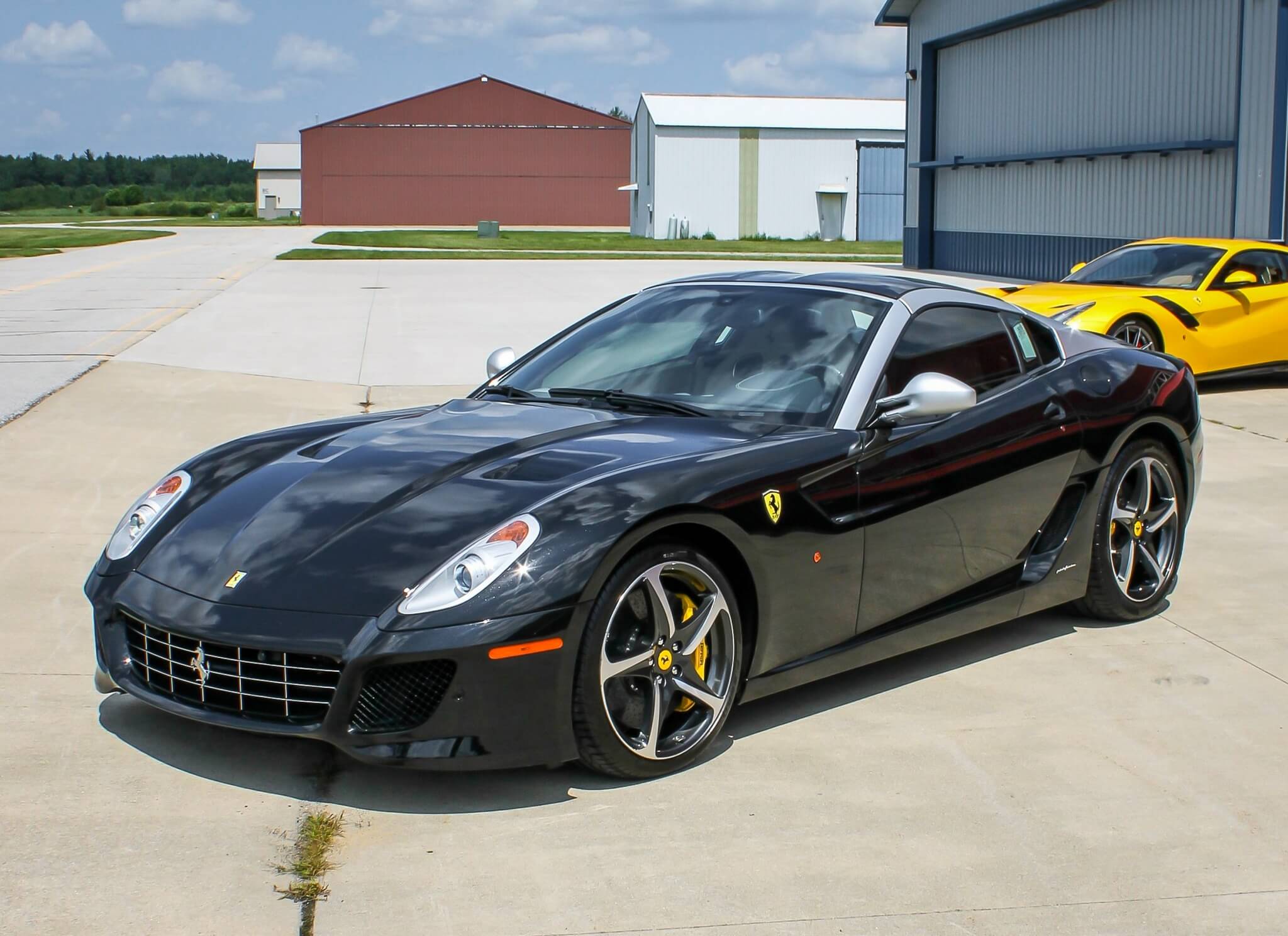 We are pleased to present this 2011 Ferrari 599 SA Aperta. Debuted at the 2010 Paris Motor Show, the open-top roadster version of the Ferrari 599 GTB Fiorano was introduced to honor designers Sergio and Andrea Pininfarina, hence the designation “SA”. In addition to its unique styling, the SA Aperta was given the upgraded engine and gearbox of the 599 GTO along with a lower and stiffer suspension, and a modified version of the exhaust system from the 599XX race car.  A limited run of 80 examples were produced and offered exclusively to Ferrari’s special clientele.  Finished in Nero Stellato, this example was custom ordered through Ferrari’s Extra Campionario program by Remo Ferri, the founder of Canada's first authorized Ferrari dealership.  It features Sabbia leather upholstery, special thickened stitching, and chrome/painted wheels.  In November of 2014, it was acquired by a collector in the U.S. who had the car imported to Virginia where it was serviced and customized by Ferrari of Washington with Nero-painted accents on the wheels along with a genuine carbon-fiber hardtop, a rare option which is said to have only been specified on 14 other examples.  It was later acquired by the current owner in August of 2020 who had a genuine carbon fiber engine frame assembly installed.  Among the rarest and most highly collectible Ferrari’s of the modern era, this 599 SA Aperta is now being offered for auction by its seller out of Michigan with just under 700 miles (1121 km) showing on the odometer. 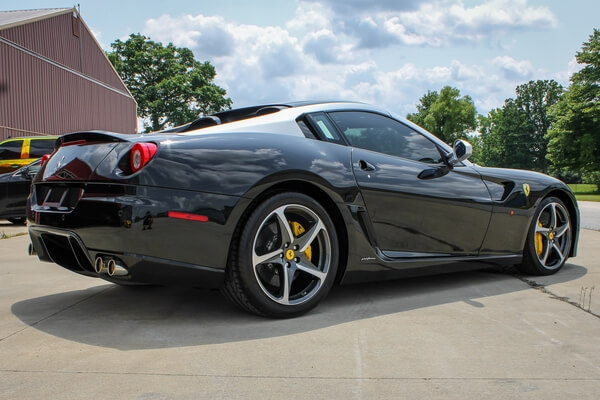 The 599 SA Aperta is based on the 599 GTB Fiorano, a Pininfarina-designed aluminum body with distinctive wind-tunnel-shaped styling designed to maximize aerodynamics and high-speed downforce. The designers of the SA Aperta re-engineered the chassis to ensure it maintained a level of stiffness comparable to that of the fixed-roof GTB.  The silver-painted carbon-fiber fins behind the integrated roll bars recall the “flying buttress” pillar design of the 599 GTB and match the windscreen frame and side mirrors. The windshield of the SA was given a steeper rake and the front and rear fascias were subtly revised with larger air intakes and outlets. 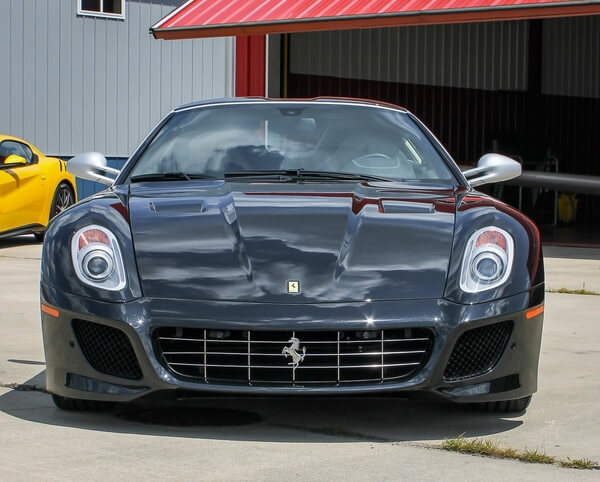 The Nero Stellato (117) finish on this example was offered as an Extra Campionario option at an additional cost of $13,982. Other optional details include Scuderia shields on the front fenders, yellow-painted carbon-ceramic brake calipers, and a rare carbon-fiber removable roof panel installed by Ferrari of Washington.  A black canvas soft top is also included as standard equipment.  Detailed images are provided in the gallery along with a clean CARFAX report. The SA Aperta rides on model-specific 20” 5-spoke wheels in a two-tone chrome and painted finish with custom Nero accents applied by Ferrari of Washington. 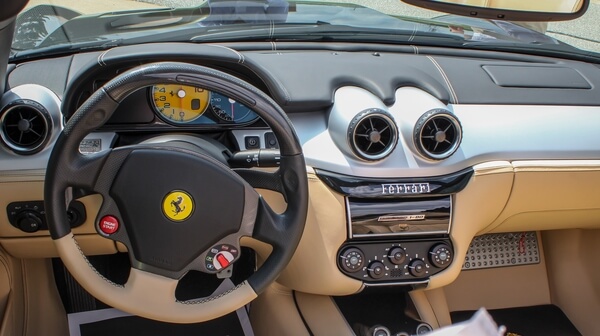 The interior of this SA Aperta is upholstered in Sabbia leather with special thickened stitching. The deeply bolstered carbon-fiber bucket seats are equipped with power adjustment and feature embroidered Cavallino Rampante Ferrari logos on the headrests. Sabbia leather with Nero contrast stitching covers the lower dashboard, center console, and door panels. The floor of the cabin is appointed with matching tan carpeting, aluminum Ferrari door sills, drilled pedals, an aluminum passenger footrest, and unique black floor mats with matching Ferrari emblems and “SA Aperta” logos.  Ferrari’s racing heritage is celebrated with its drivers-side dashboard-mounted “Ferrari 31 Formula 1 World Titles” plaque along with its individual chassis number. Another specialized plaque on the radio cover reads “Limited Edition 1 of 80”. The SA’s flat-bottomed perforated leather and carbon-trimmed steering wheel features an LED tachometer as well as the Manettino switch which allows the driver to change performance characteristics while underway. Instrumentation includes a 360-KPH speedometer and a yellow 10,000 RPM tachometer. Other optional features include front and rear parking sensors and a Bluetooth-enabled stereo system with an iPod connection. 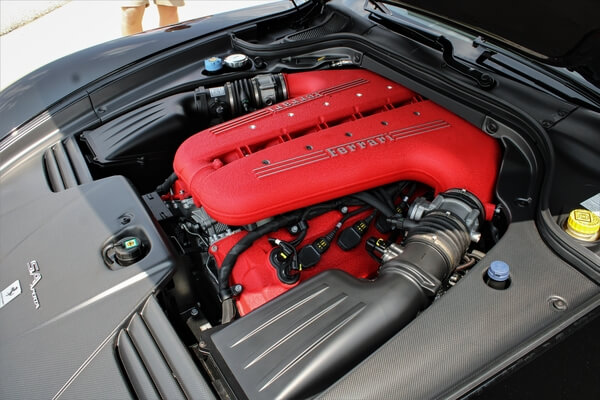 A genuine dealer-installed carbon fiber engine frame surrounds the 6.0L naturally aspirated flat-plane crank V12, which is rated at 661 HP and 457 lb.-ft of torque.  Derived from the 599 GTO, this engine was the most powerful Ferrari had ever produced at the time.  Paired with a lightened 6-speed Ferrari F1 automated-manual transmission that sends power to the rear wheels, the SA Aperta can accelerate from 0-60 MPH in as little as 3.5 seconds while reaching a top speed over 200 MPH. The SA Aperta features Brembo carbon-ceramic brakes as well as specially tuned magnetorheological dampers, a stiffer rear anti-roll bar, Ferrari F1-Trac traction control, and a modified exhaust system derived from the track-only 599XX.  Records from authorized Ferrari dealers are said to show services carried out from 2014-2017 and more recently in 2020. A letter from Ferrari North America also confirms the car to meet all U.S DOT, EPA, and CARB requirements in effect on the date of manufacture. 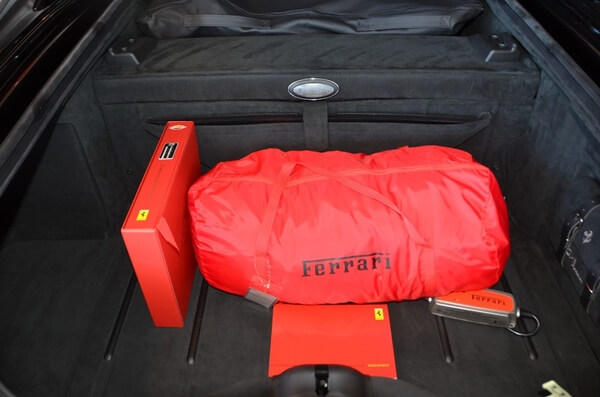 This sale will include the factory soft top, a genuine Ferrari car cover and battery charger, the original owner's manuals, a set of two keys, SA Aperta floor mats, a copy of the original window sticker and build sheet, service history, a Ferrari Classiche Red Book, and a clean title (lien). A true automotive work of art, the elusive 599 SA Aperta remains a holy grail among Ferrari collectors.  Do not let this very special opportunity pass you by.