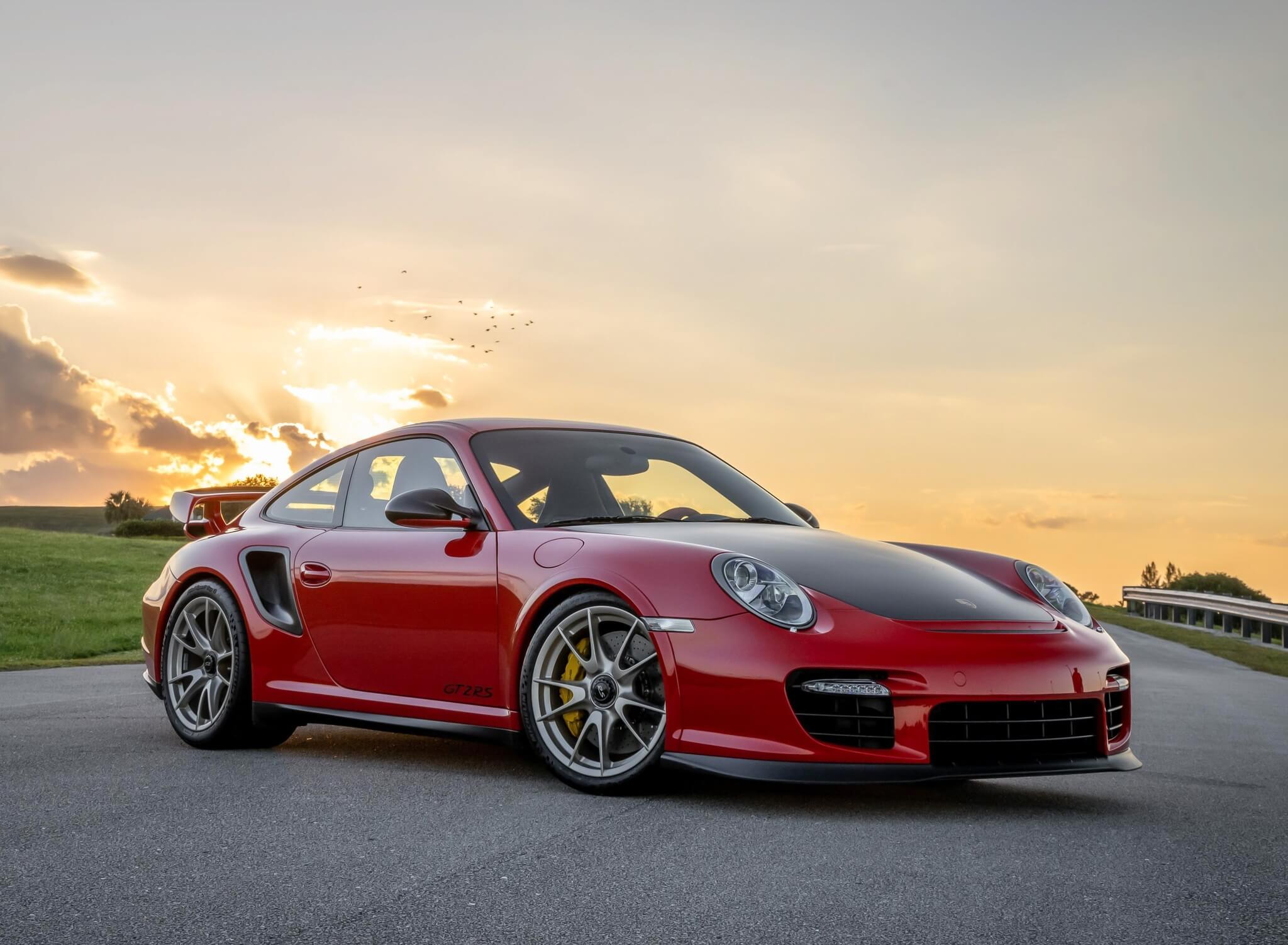 We are pleased to offer this 2011 Porsche 997.2 GT2 RS finished in Guards Red over a black and red interior trimmed in leather and Alcantara.  The fastest and most powerful road-going 911 ever at the time of its debut, the GT2 RS was presented as a sendoff to the 997 generation featuring Porsche Ceramic Composite Brakes (PCCB), aggressive aerodynamics, and a twin-turbocharged Mezger flat-six engine sending power to the rear wheels through a traditional 6-speed manual transmission.  Limited to 500 units worldwide, the GT2 RS remains one of the rarest and most sought-after Porsches of the modern era.  This particular example, #337, was first registered in Texas and came optioned with a rear center console in carbon fiber, Porsche crested headrests, Sound Package Plus, and the Additional Carbon Fiber Interior Package.  It has spent its life between private collections and has also been upgraded with adjustable RSS suspension links along with a set of high-flow Fabspeed sport catalysts.  Well documented and accompanied by the original window sticker, car cover, manuals, and Porsche Certificate of Authenticity, this rare 997.2 GT2 RS is now being offered for auction by its seller out of Florida while showing just over 3k miles on the odometer. 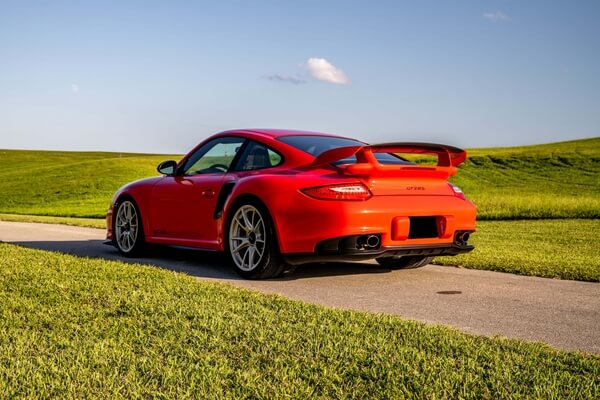 This GT2 RS is finished in its debut color of Guards Red with an exposed matte carbon fiber hood as well as carbon fiber trim on the mirror caps, air ducts, and rear diffuser.  The full exterior has been preserved under a layer of clear paint protection film and the seller reports no history of track use.  Some minor scuff marks are noted on the lower front spoiler along with a few small imperfections in the removable paint protection film, detailed images are provided in the gallery along with paint meter readings and a clean CARFAX report.  The factory 19” center-lock wheels are finished in Weiss Gold and come dressed in a set of Michelin Pilot Sport Cup 2 tires dated from 2015 with approximately 5mm tread remaining. 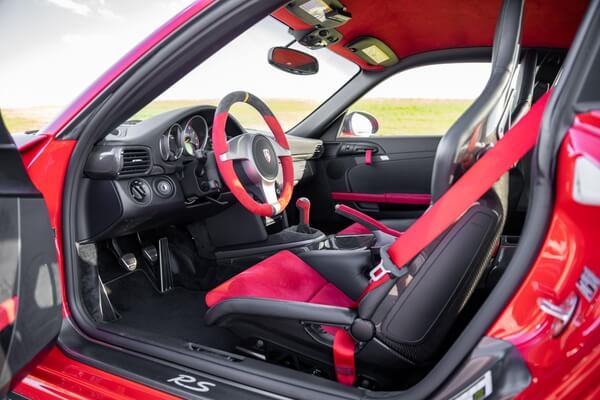 Inside, the cabin is trimmed in black leather with contrasting red Alcantara upholstery on the seat centers, armrests, steering wheel, shifter, brake handle, and headliner.  The lightweight carbon-fiber bucket seats feature Guards Red seatbelts and Exclusive Porsche crested headrests. Other noteworthy options include an Exclusive footrest in aluminum, a rear center console in carbon fiber, the Additional Interior Carbon Fiber Package, and Sound Package Plus.  The Sport Chrono Package was not equipped, therefore the dashboard is without a centrally mounted lap timer.  The cabin is described to have been very well preserved with only a minor scuff mark present on the rear center console.  A complete list of factory specifications is provided below: 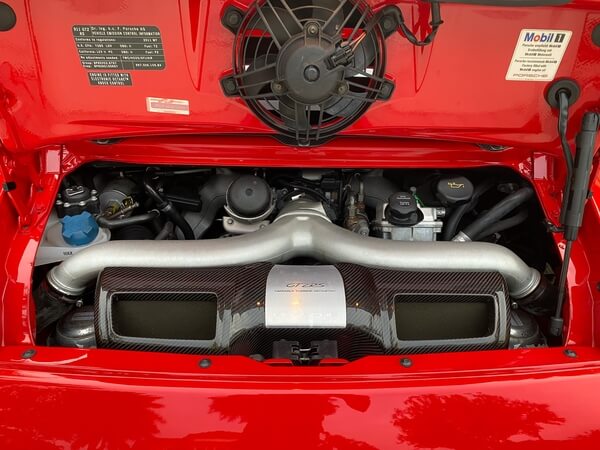 One of the last Porsche 911s to utilize the legendary Mezger engine design, the GT2 RS features a twin-turbocharged 3.6L flat-six with dry-sump lubrication, forged pistons and connecting rods, a single-mass flywheel, variable valve timing, and a lightweight titanium exhaust.  As much as 620 HP stock is sent to the rear wheels by way of a 6-speed manual transmission, allowing acceleration from 0-60 MPH in approximately 3.5 seconds with a top speed over 200 MPH.  There RS also comes standard with Porsche Ceramic Composite Brakes (PCCB), improved cooling systems, revised aerodynamics, and a lightweight design that saves 154 lbs. over the standard 997 GT2.  This example has been fitted with adjustable RSS suspension links as well as a set of high-flow Fabspeed sport catalytic converters that provide increased sound and power output. A recent multipoint inspection carried out by Braman Motorcars is provided for reference in the gallery along with a DME report and some historical service records. 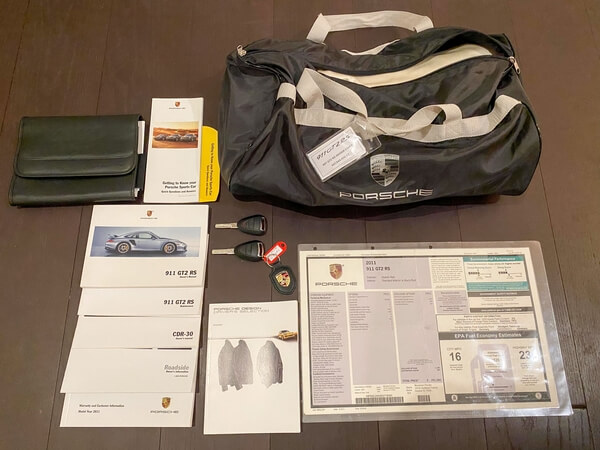 This sale will include a set of two keys, the original window sticker, owner's manuals, a car cover, CPO documents, a Porsche Certificate of Authenticity, and a clean title. The most extreme roadgoing Porsche 911 to have been offered with a manual transmission, the 997.2 GT2 RS will remain sought-after for years to come.  Do not miss your chance to add this beautifully presented Guards Red example to your collection.