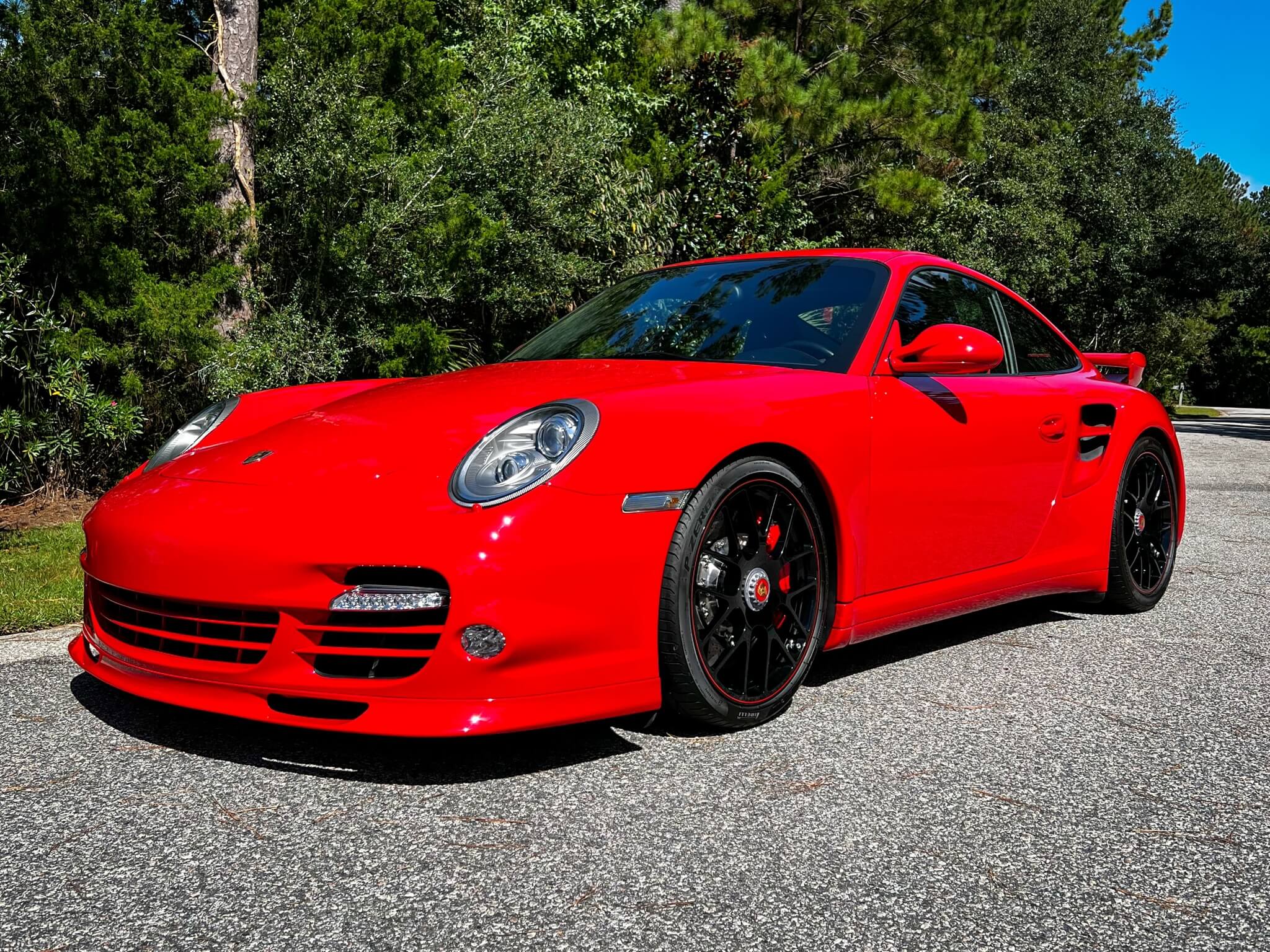 We are pleased to offer this rare 2013 Porsche 997.2 Turbo S Coupe finished in Guards Red.  Among the very few examples produced for the final 2013 model year, this Turbo S was ordered at an original sticker price of over $190k with the Aerokit package, ParkAssist System, black-painted wheels, and a black full leather interior with deviated stitching, painted trim, crested headrests, seatbelts in Guards Red, and more.  The car has also received an upgraded SOUL exhaust, red brake calipers, carbon door sills, and custom leather-wrapped trim pieces.  Acquired by the current owner in 2018 at just over 14k miles, this Turbo S has been meticulously cared for ever since and is now being offered for auction out of South Carolina while showing approximately 15,800 miles on the odometer. 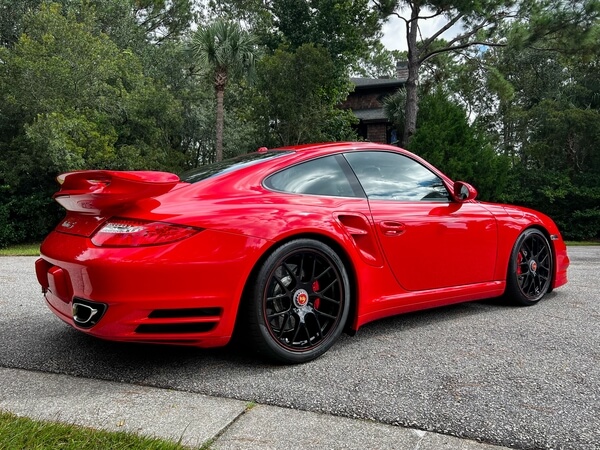 This 997.2 was ordered in Guards Red along with the Aerokit Turbo (XAF) package which includes side skirts, a lower front spoiler, and a larger bi-plane rear wing.  Other Exclusive options include painted side skirts, painted headlight cleaner covers, and 19” RS Spyder center-lock wheels finished in black.  The front bumper was professionally refinished to address stone chipping and the car is reported to have been garage-kept and sparingly driven throughout the current ownership, detailed images are provided in the gallery along with a clean CARFAX report.  The brake calipers feature a custom Guards Red finish along with a matching stripe around the outer wheel lips.  These wheels are currently dressed in a set of Pirelli P Zero tires that were reportedly mounted at the time of the seller's purchase in 2018. 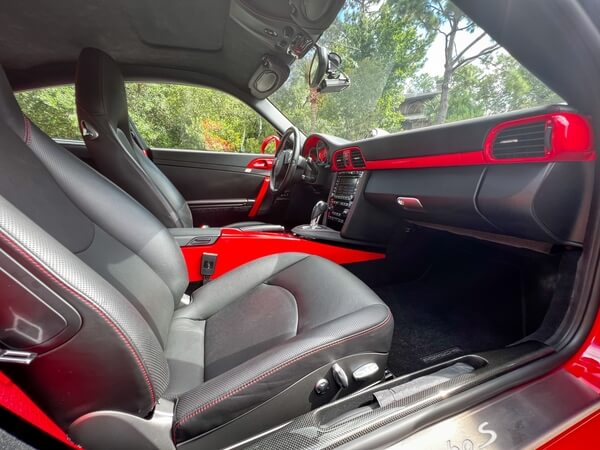 Inside, this Turbo S features a black full leather interior with deviated stitching, an Alcantara headliner, and Guards Red painted trim.  Other options include seatbelts in Guards Red, Porsche crest embossed headrests, heated and ventilated 12-way power seats, a three-spoke multifunction steering wheel, leather sun visors, and illuminated doorsill guards in stainless steel.  The inner door sills have been replaced with custom MAcarbon pieces, and the overhead console and gear selector surround have been custom wrapped in leather with deviated stitching.  Minor signs of wear are noted on the driver seat and the front hood release switch has been replaced by the current owner.  All gauges and accessories are reported to be fully functional. 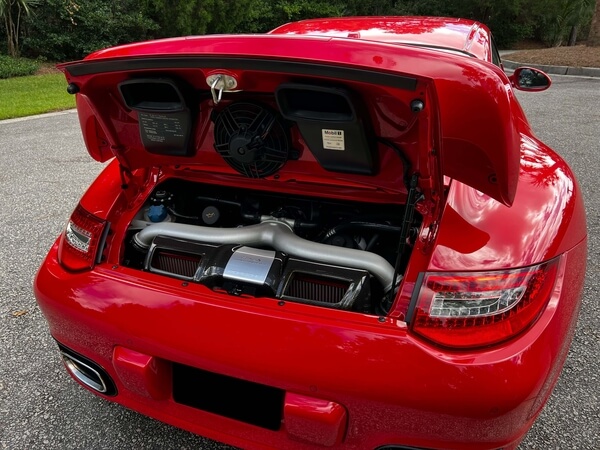 The flagship model of the 997 generation, this Turbo S is equipped with a twin-turbocharged 3.8L flat-six engine that produces up to 530 HP and 516 lb.-ft of torque stock.  All four wheels are driven by way of a 7-speed dual-clutch PDK transmission, allowing acceleration from 0-60 MPH in as little as 2.9 seconds with a top speed of nearly 200 MPH.  The Turbo S is equipped as standard with the Sport Chrono Package, Dynamic Engine Mounts, Porsche Torque Vectoring (PTV), and Porsche Ceramic Composite Brakes (PCCB).  This example has also been upgraded with a high-performance SOUL exhaust and Venair silicone charge pipes.  Annual routine oil changes have been carried out by the current owner and a full service/inspection was performed by the specialists at 911 Fantech in 2018 including a brake fluid flush, PDK service, new spark plugs, a new drive belt, and new cabin filter. 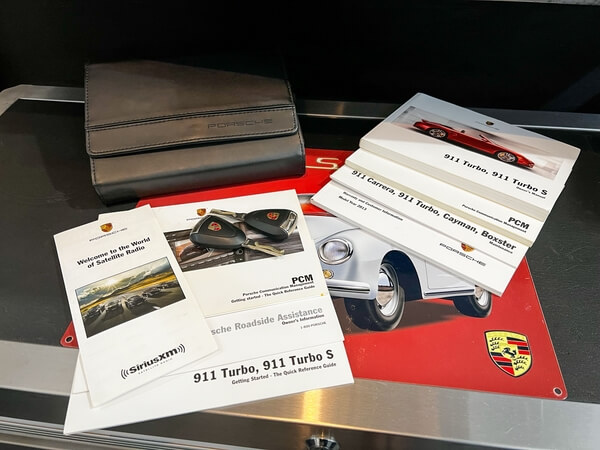 This sale will include a set of two keys, original owner's manuals, a Porsche umbrella, service records, and a clean title. This rare and beautifully configured 2013 Turbo S has been tastefully appointed with high-end modifications and upgrades, do not miss your chance to become the next owner.