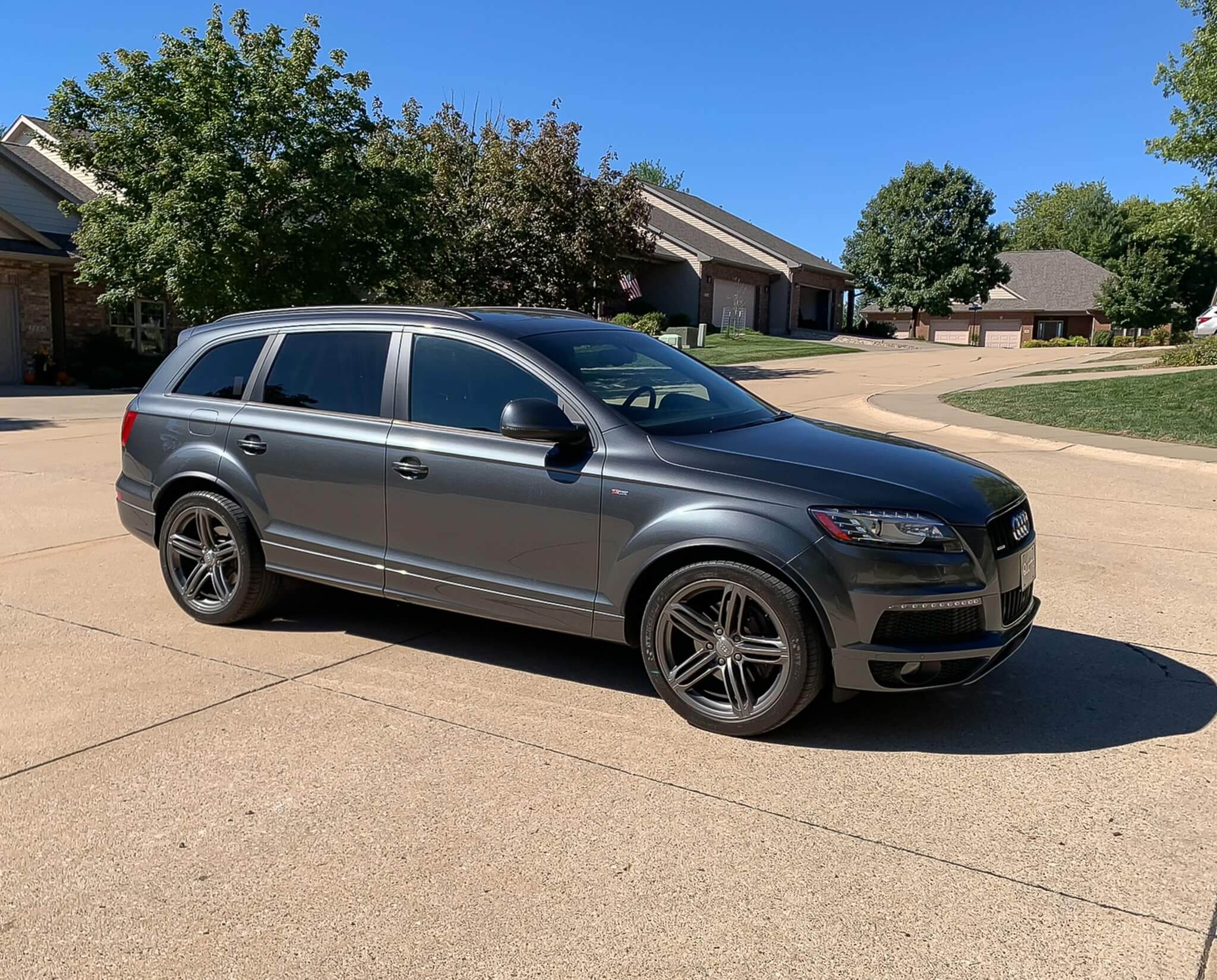 Available for auction is this 2015 Audi Q7 Quattro TDI finished in Daytona Grey Pearl Effect over a Black leather interior. When launched for the 2006 model year, the Q7 was Audi’s first SUV and went on to be offered in various configurations, including several diesel-powered models. This 2015 example was acquired by the seller in March of 2022 and came handsomely equipped from the factory with Audi Adaptive air suspension and cruise control, as well as the S Line, Line Plus, and Prestige packages. It received TDI emissions modifications in 2019 and comes with the remainder of its TDI-4 and TDI-10 warranties. This Q7 is now being offered for auction by its seller out of Iowa while showing just over 40k miles on the odometer. 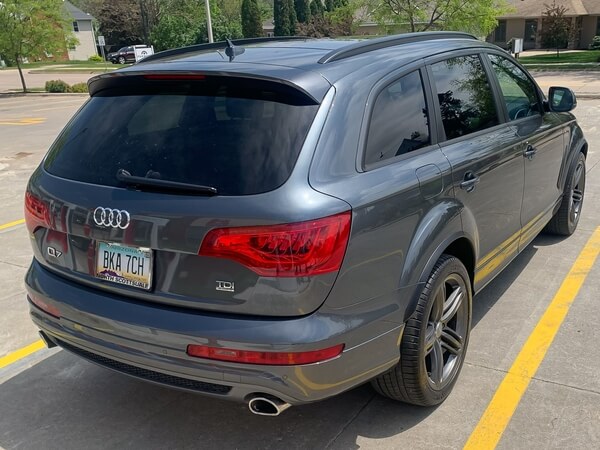 The Q7’s design was heavily influenced by Audi’s 2003 Pikes Peak Quattro concept car and is built on a modified version of Volkswagen’s PL71 platform shared with the first-generation Porsche Cayenne. This example comes finished in premium Daytona Grey Pearl Effect paint and features xenon headlights with LED daytime running lights and taillights, heated power-adjustable mirrors, and a panoramic sunroof. A small scratch was repaired on the rear tailgate, the passenger mirror housing was replaced, and the finish shows minor stone chips at the front end. A small dent on the hood has also been depicted in the gallery. The CARFAX report indicates minor damage occurred in July of 2022, although there is no further information regarding this claim. The optional S Line Package adds sportier front and rear bumpers, side valances, and badging while the S Line Plus Package adds a Black Optic treatment to the exterior trim and roof rails along with 21” 5-segment-spoke wheels in a titanium finish. The wheels come dressed in a set of Michelin Pilot Sport A/S 3+, and the seller notes that the front passenger tire shows a bit of damage near the wheel lip. 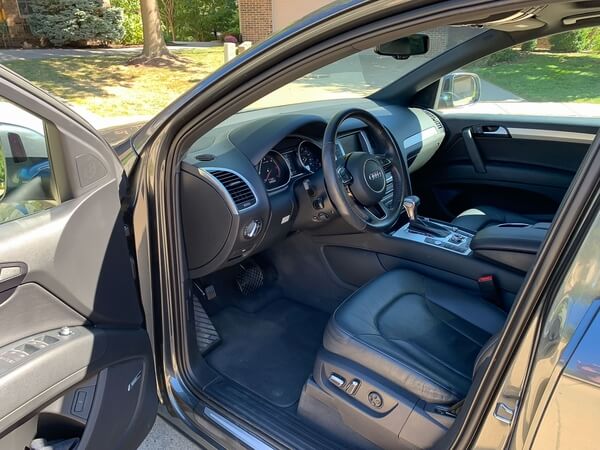 The three-row cabin is upholstered in Black leather with heated and ventilated front seats, as well as heated second-row seats. Amenities include four-zone climate control, a power-adjustable steering column, Audi MMI navigation with voice controls, a three-spoke multifunction steering wheel with shift paddles, brushed aluminum trim, and more. A complete list of factory features can be seen on the window sticker in the gallery. The seller reports that all gauges and accessories remain functional. 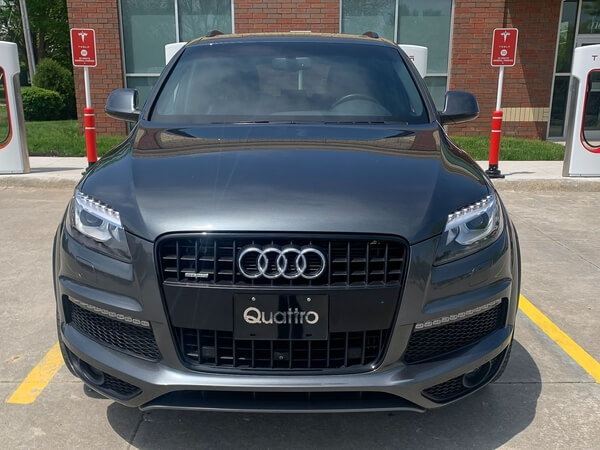 Power comes from a 3.0L turbodiesel V6 producing up to 240 HP and 406 lb.-ft of torque. All four wheels are driven by way of an 8-speed Tiptronic transmission and Audi’s renowned Quattro all-wheel-drive. This example was factory equipped with Audi’s adaptive air suspension which allows the driver to adjust the height of the suspension depending on driving conditions and adaptive cruise control which automatically maintains an appropriate following distance behind other vehicles at highway speeds. The CARFAX report includes six service history records dating back as far as 2015, and the seller notes the complete service history is documented by Elsa2Go. The Volkswagen diesel recall work was carried out in July of 2019, and the vehicle will be accompanied by a TDI-4 warranty ending 7/9/2033 or 71,807 miles and a TDI-10 warranty ending 10/16/25 or 120,000 miles. 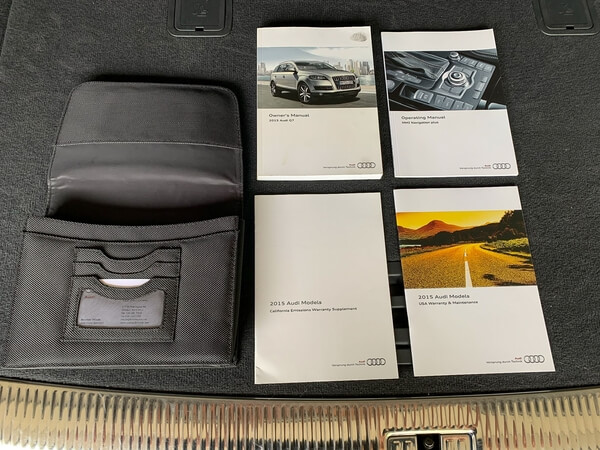