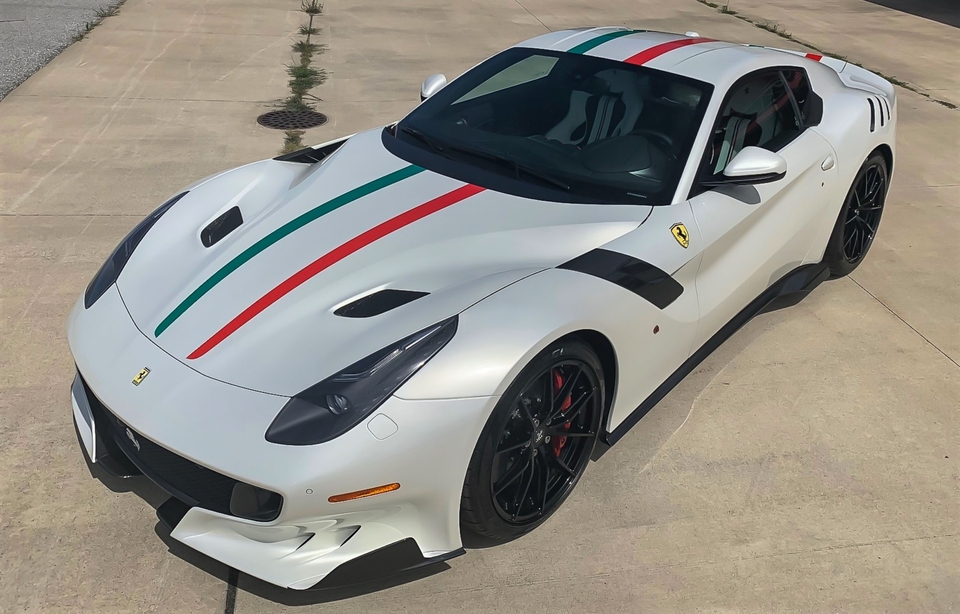 We are pleased to present this outstanding 2017 Ferrari F12tdf. Carrying on Ferrari’s illustrious tradition of V12-powered grand touring cars, the F12 features a 769 HP naturally aspirated engine, advanced race-derived aerodynamics, magnetorheological dampers, carbon-ceramic brakes, electronic rear-wheel steering, and utilization of extensive lightweight materials. One of only 799 examples produced in total, the special edition F12tdf derives its namesake from the legendary Tour De France Automobile endurance road race which was dominated by Ferrari between 1956-1964.  Finished in Bianco Italia, this Canadian-delivered 2017 example was custom ordered through Ferrari's Extra Campionario program with a host of special options including an Italia interior/exterior livery, Bianco/Nero leather upholstery, and a matching luggage set. With less than 100 miles traveled from new, this highly unique collector-grade F12tdf is now being offered for auction by its seller out of Missouri. 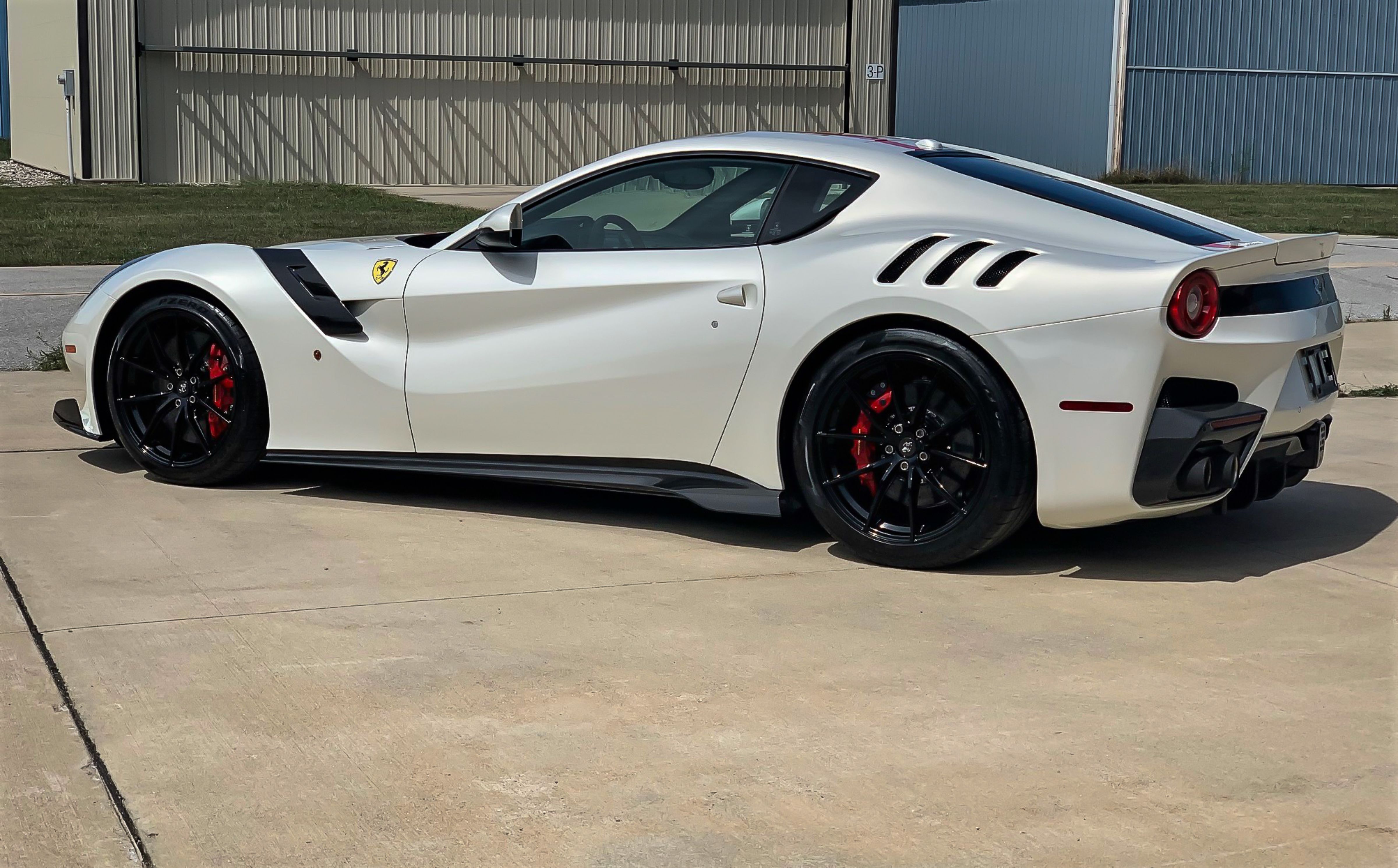 The tdf is based on the F12 Berlinetta grand touring car, a Pininfarina-designed aluminum body developed with a focus on high-speed downforce.  Compared with the Berlinetta, almost every panel of the tdf has been modified to create twice the downforce while reducing aerodynamic drag. It makes use of Ferrari’s Aerobridge technology, consisting of air channels that run from the hood, through the fenders, into the rear vents above the rear wheels, and exit via the finned rear diffuser which uses dynamic flaps that deploy as necessary. The front bumper has been completely redesigned, featuring a widened and scooped lower section that incorporates a splitter, dive planes, floor wings, and louvers to manage airflow. The rear spoiler has been heightened, and the rake of the rear glass has been modified to achieve more downforce. The front and rear tracks have also been widened to accommodate the 275mm width tires in the front and 315mm in the rear. 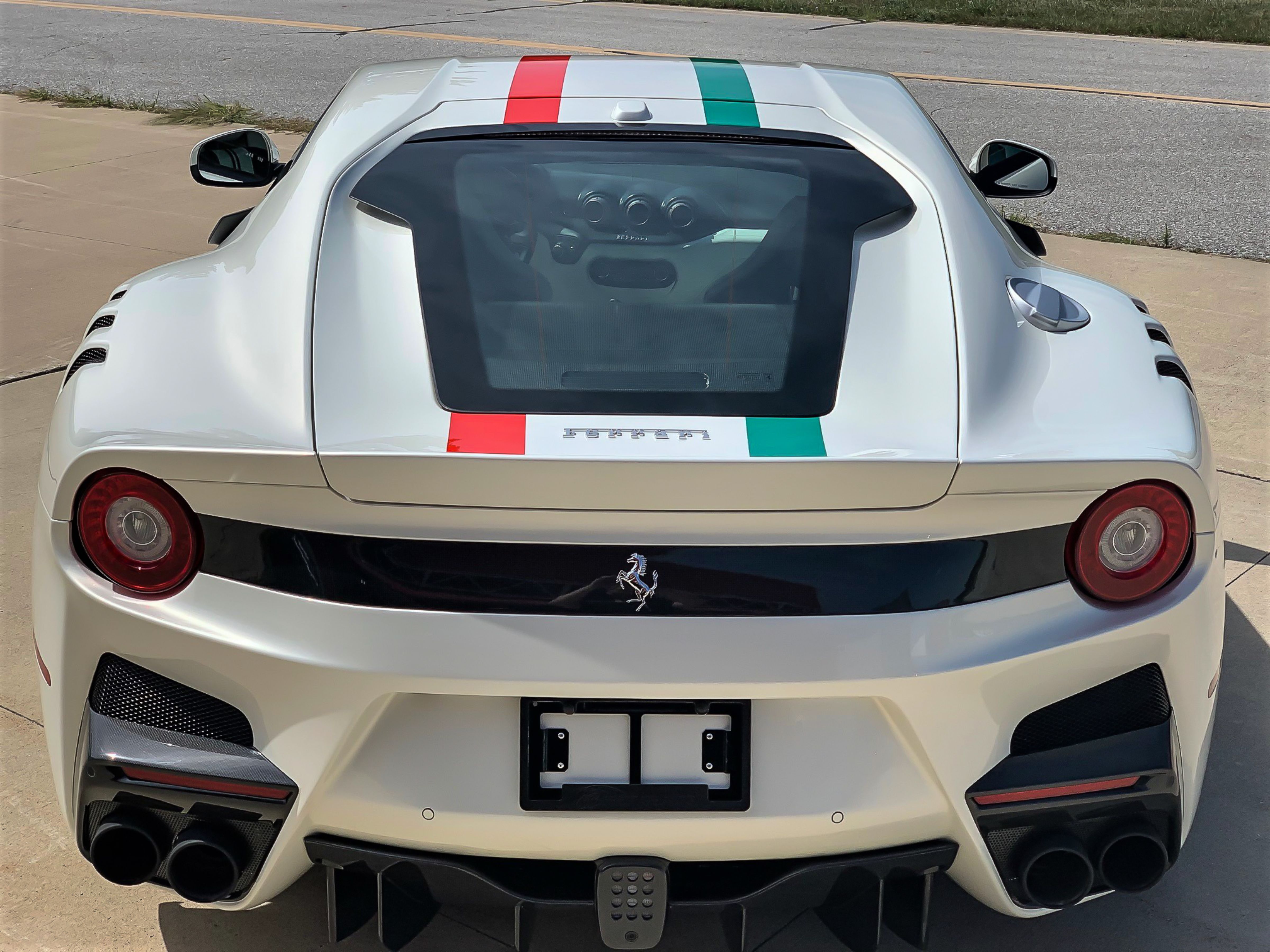 This example is finished in Extra Campionario Bianco Italia with special Italia livery stripes over the top of the car.  It also features optional carbon-fiber trim for the headlight inserts, rear fog lamp, and wheel center caps. This tdf rides on Pirelli P-Zero Corsa PZC4 tires mounted on lightweight 20” black forged wheels, which sit in front of the massive Rosso Corsa painted carbon-ceramic brake calipers. Detailed images are provided in the photo gallery along with a clean CARFAX report. 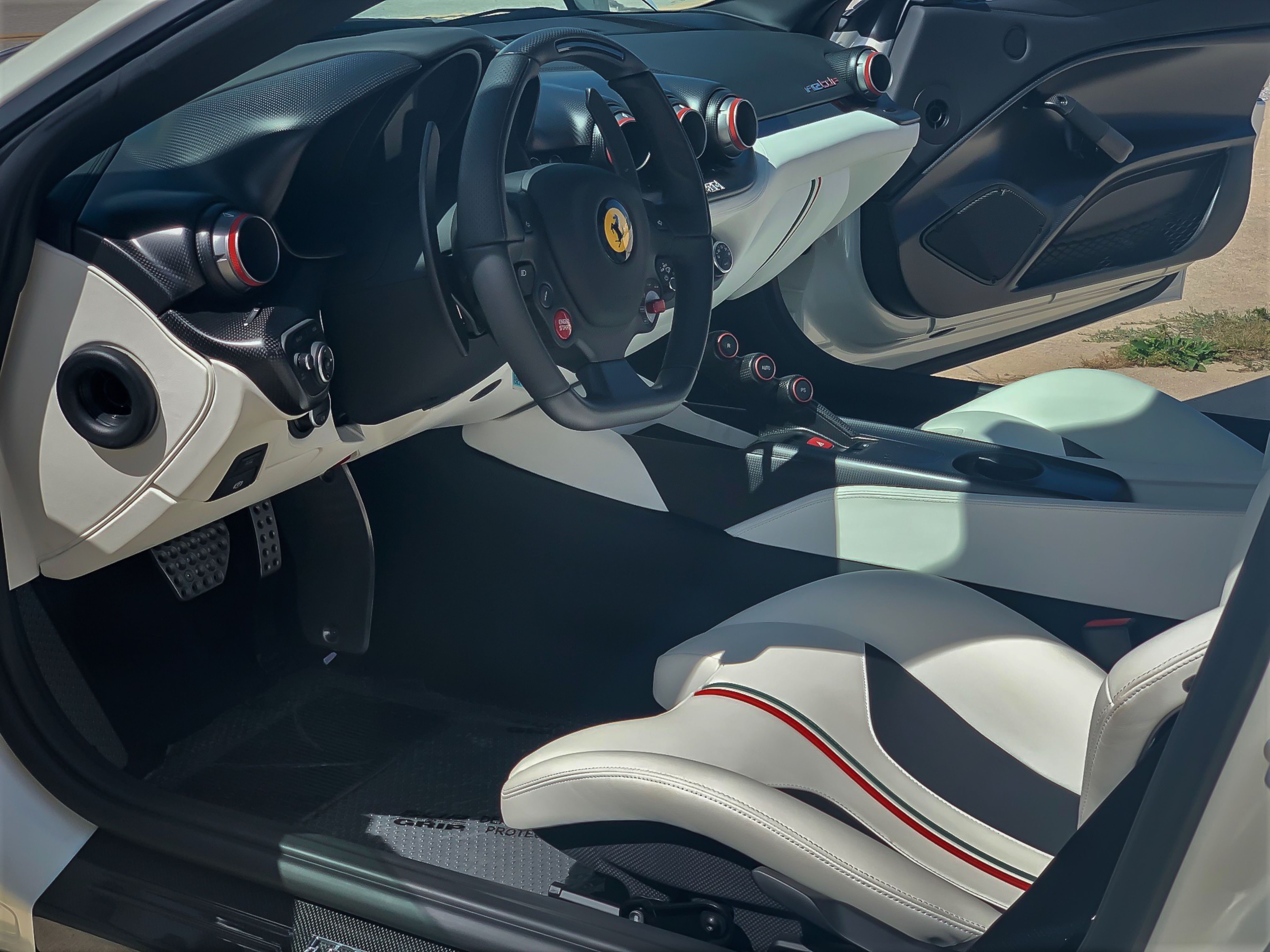 The interior of this F12tdf is upholstered with Extra Campionario Bianco/Nero leather with special Italia livery stripes down the centers of the carbon-fiber bucket seats. The seats feature manual adjustment and black embroidered Cavallino Rampante Ferrari logos on the headrests. The cabin has been extensively optioned with carbon-fiber trim including the dash inserts, sill covers, rear shelf, and rear bench. Standard carbon-fiber trim included the one-piece door panels, center console, and instrument panel. The lower dashboard and center console are upholstered with matching Bianco leather and include an Italia stripe on the passenger side knee padding. This example also received a matching tdf luggage set, which comes tailored in the same Bianco/Nero leather and carbon fiber theme with Italia livery stripes. A specialized plaque in the center dash reads “Limited 1 of 799”. 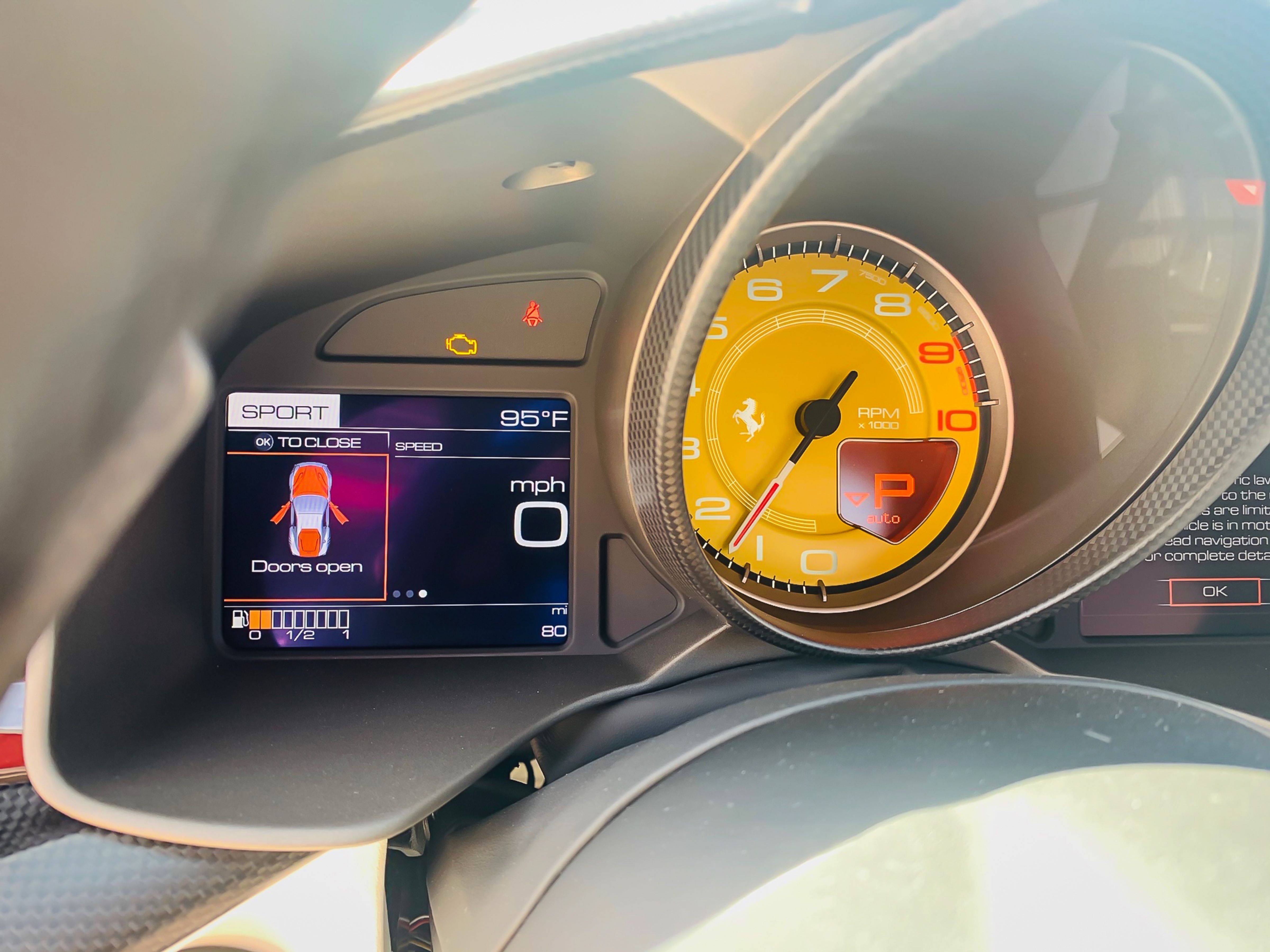 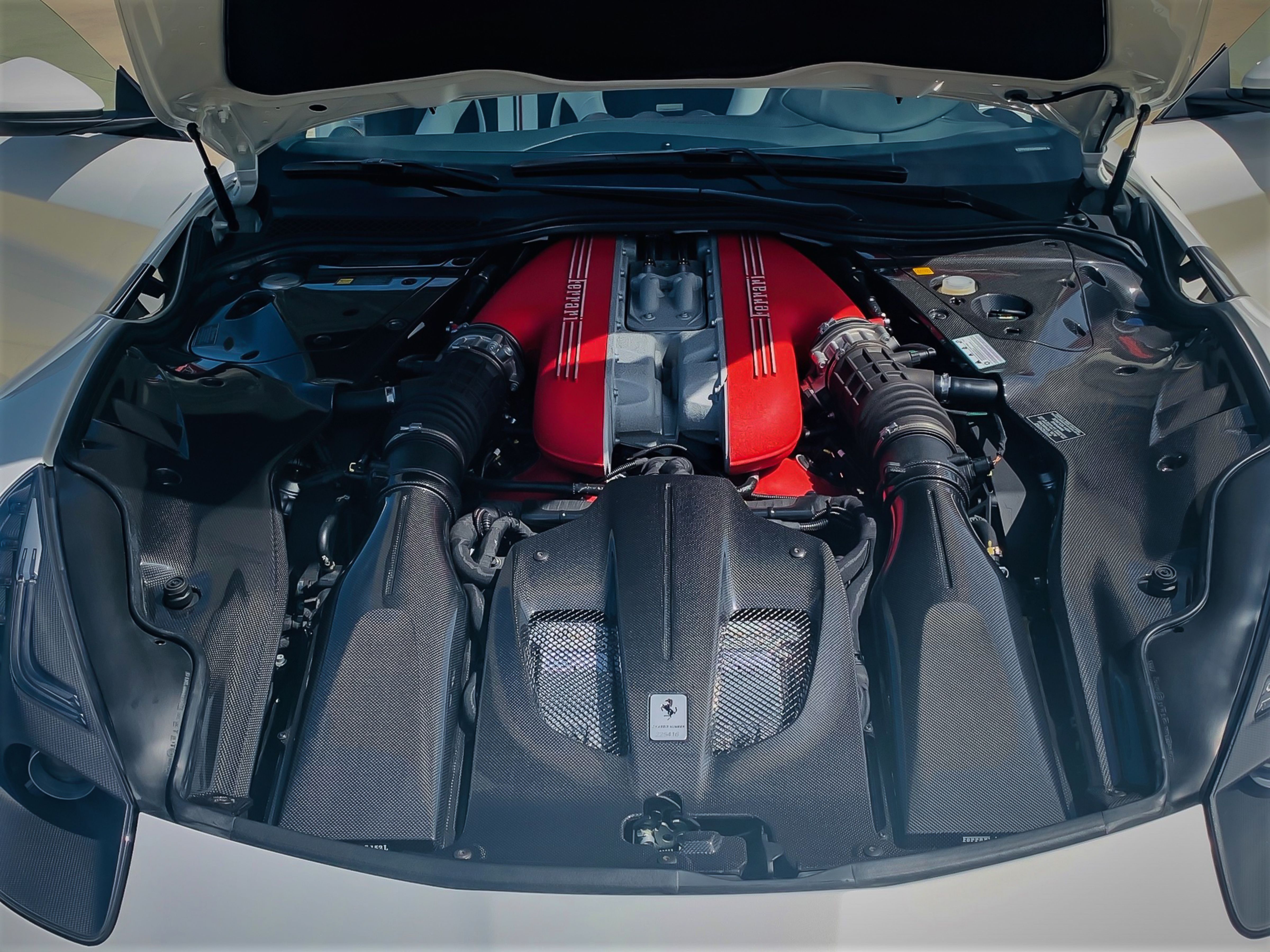 The F12tdf is powered by a 6.3L naturally aspirated flat-plane crank V12 engine which can trace its roots back to the legendary Ferrari Enzo. The engine itself has been heavily revised and features race-inspired mechanical solid tappets and variable-length individual intake trumpets used on Formula 1 cars to extract maximum performance. Generating up to 769 HP and 520 lb.-ft of torque, the F12tdf can reach 60 MPH from a standstill in as little as 2.9 seconds and carry on to a claimed top speed of 211 MPH. Power is delivered to the rear wheels through a 7-speed dual-clutch transmission, which uses shorter gear ratios and reinforced internals to handle the extra power. Additional features include Brembo carbon-ceramic brakes and adjustable magnetorheological dampers as well as electronic rear-wheel steering which helps reduce oversteer and increase turn-in capability at speed. This example was optioned with Ferrari’s Sport Exhaust Pipes as well as carbon-fiber engine and airbox covers which feature a Ferrari plaque denoting the individual chassis number. 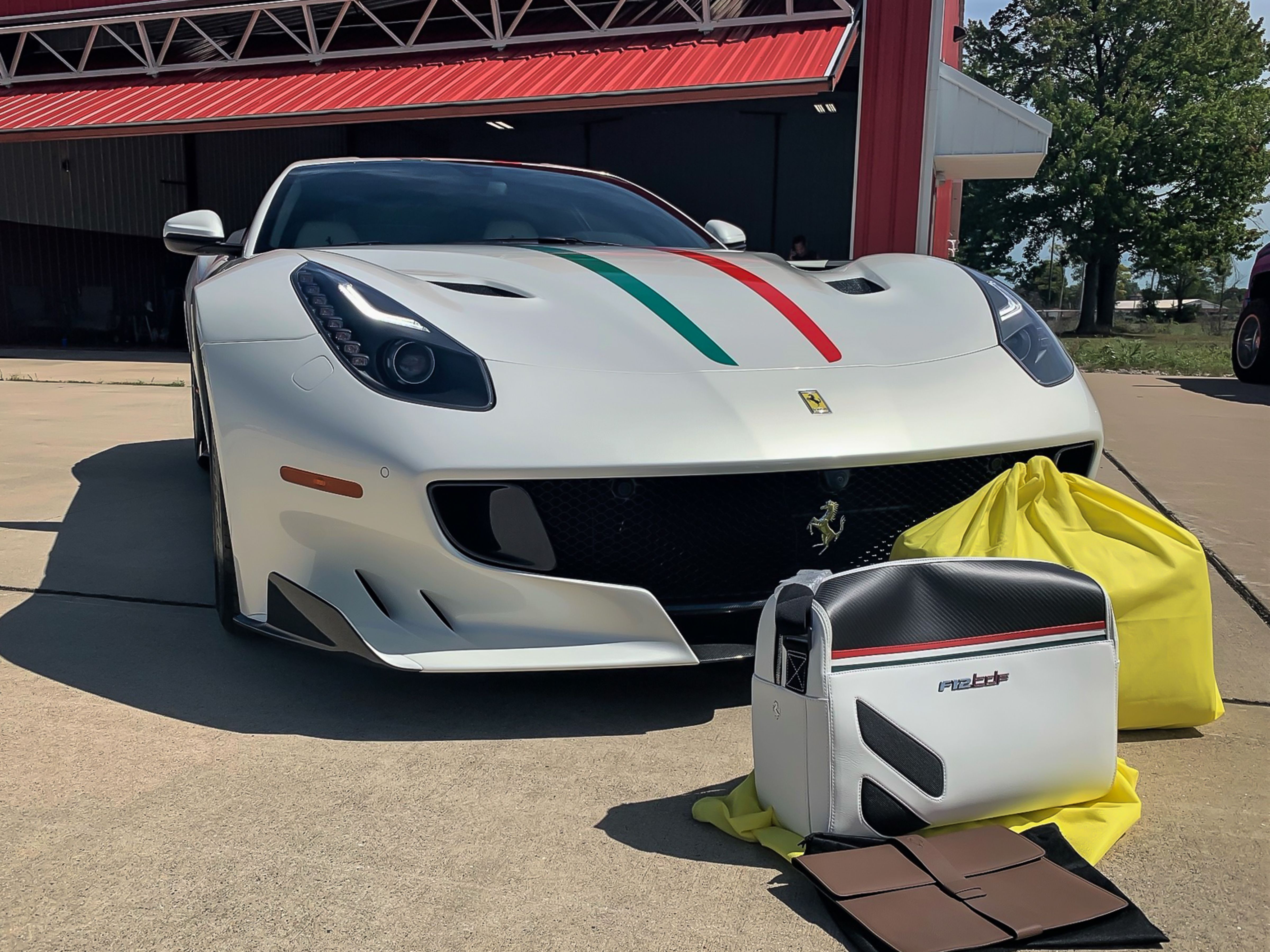 This sale will include a matching luggage set, owner's books, and a clean title. Highly sought after and well on its way to becoming one of the most collectible Ferrari’s of the modern era, this one-of-a-kind F12tdf presents an opportunity that is not to be missed.