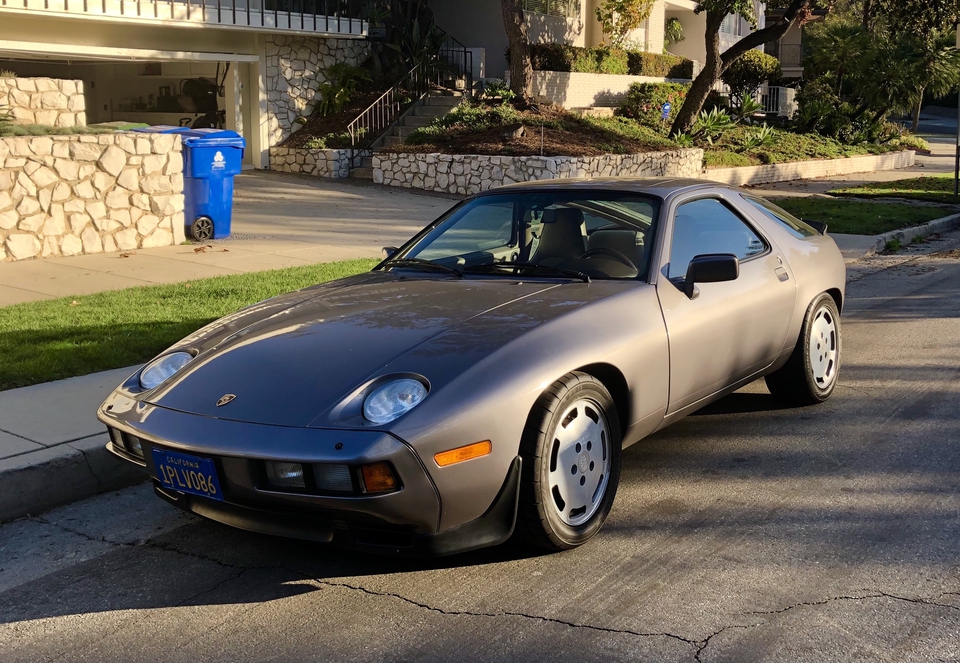 Up for auction is this 1986 928 S. The Porsche 928 was originally intended to replace the 911, but instead, found it’s own niche as Porsche’s iconic grand tourer.  This 928 is an S model giving it a healthy boost in performance over the base model.  This three-owner car has been with its original owner up until 2015. Since then, the two most recent owners have refreshed this car and performed comprehensive maintenance.  The car is currently showing 123,900 miles on the odometer and is being offered in excellent driving condition. 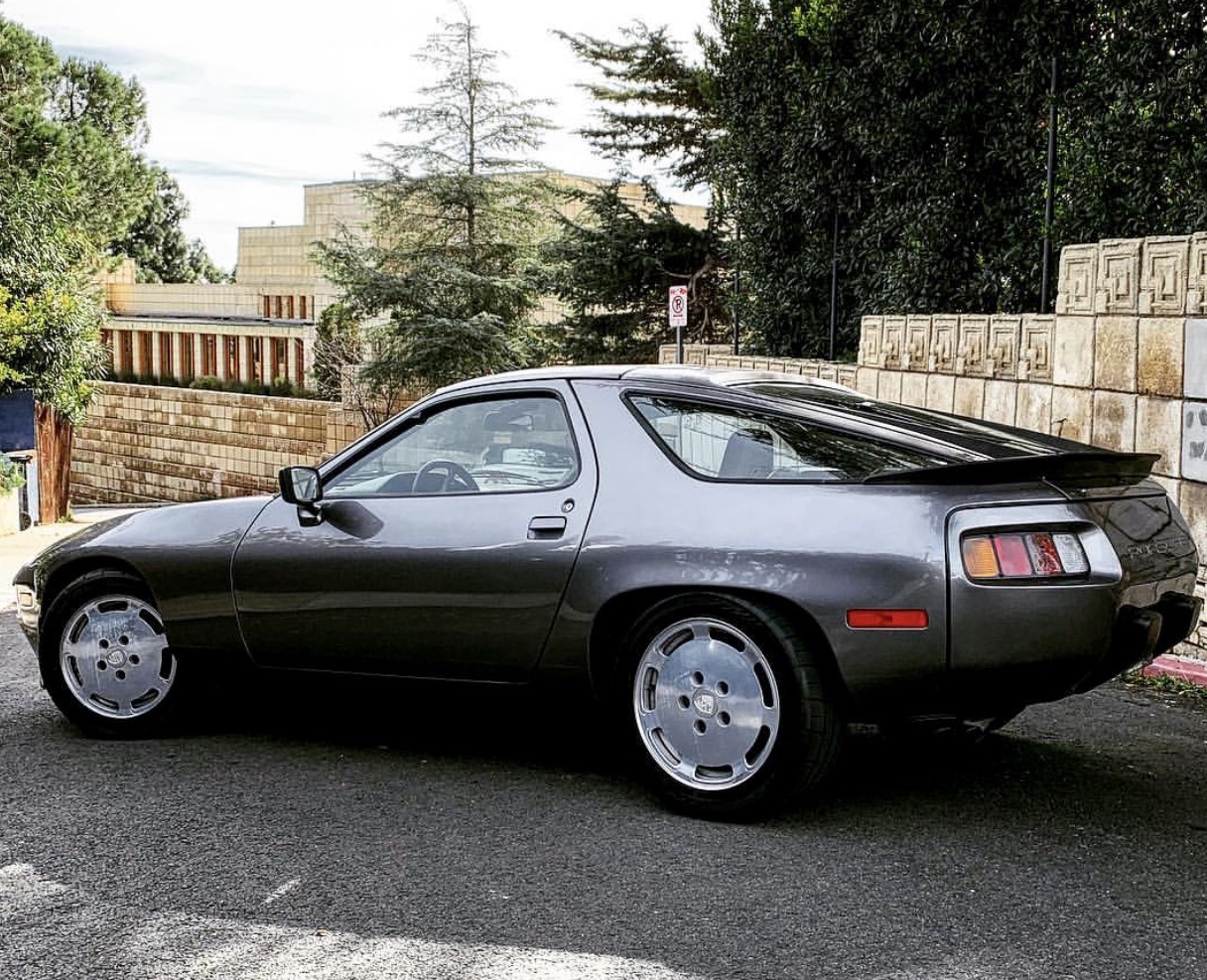 This 928 S is finished in timeless Meteor Gray.  The paint is fully original with the exception of the front and rear bumpers.  The paint stands in great condition overall and only exhibits a few minor chips and flaws.  This 928 S rides on highly desirable OEM 1988 S4 wheels wrapped in relatively new Bridgestone Potenza tires (less than 2.5k miles).  These wheels are in the same style as the original “manhole” rims but are an inch wider.  The wheels show no bends or curb rash, but show some flaws in their finish as a result of the use of incorrect wheel cleaner.  With no further exterior modifications, this car retains its original look and is sure to turn some heads. 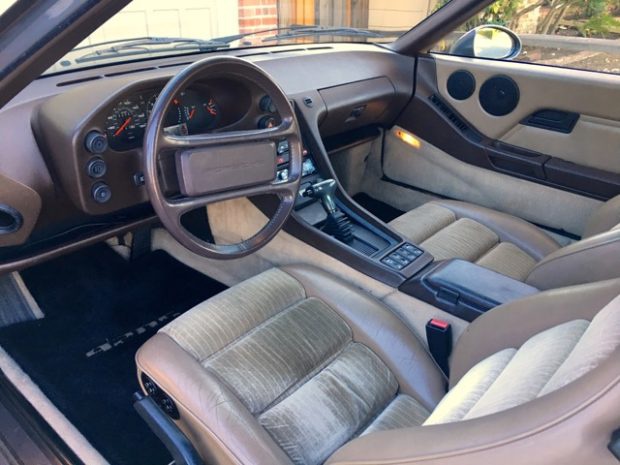 The Gray/Beige interior with velour stripes is said to be in well above average condition.  The driver’s seat shows some creasing on the bolsters and the seller states that there is some cracking on the dash by the vents.  This car has been factory equipped with a sunroof and rear A/C.  The original buildsheet included a hi-fi sound package complete with a Blaupunkt Monterey SQR-23 radio and additional amplifier.  Since then, the seller has installed a genuine Porsche Classic Radio, a $1200+ upgrade.  This touchscreen radio offers superb sound quality, GPS navigation, Bluetooth capabilities and helps to maintain the original look of the interior.  There is also a vintage integrated Valentine One radar detection system installed. All electronics and accessories are in excellent working order. 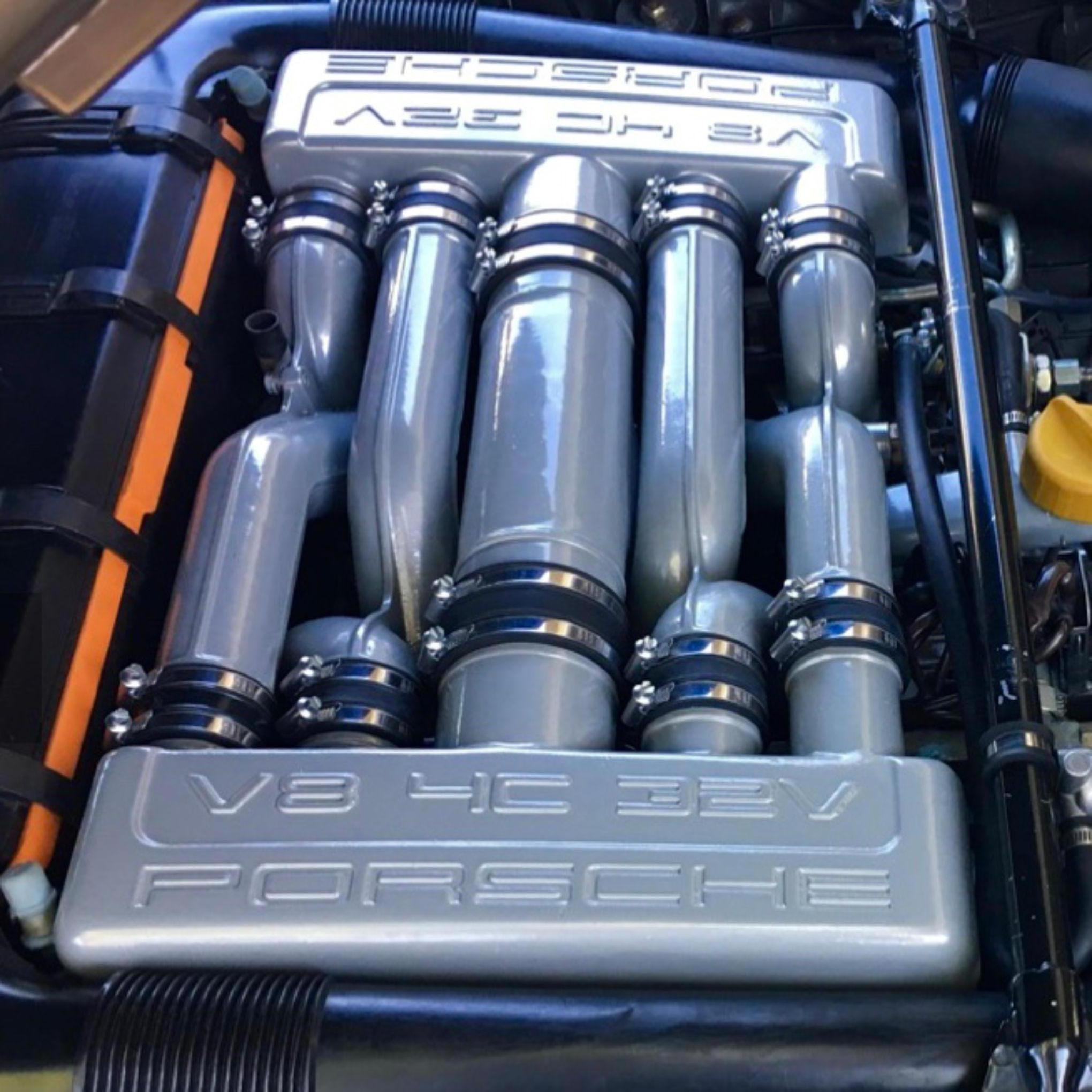 This 1986 928 S is equipped with a 5-liter 32v V8 engine.  This massive power plant is mated to an automatic transmission and is capable of producing 306hp and 294 lb-ft of torque.  This venerable engine is unmodified and runs perfectly.  In 2016 the previous owner replaced the timing belt and conducted a water pump service along with a top-end refresh.  This top end refresh included new rubber hoses, vacuum lines, fuel lines, cleaned and rebuilt fuel injectors, a rebuild of the mass airflow sensor, new throttle position switch, and finally cleaning, stripping and powder coating the intake manifold.  Receipts totaling $5,000 are available for parts.  The current owner has had an authorized dealer perform a 30k major service as well as replace the rear brakes.  The only modification to this car’s platform has been the addition of 13mm wheel spacers, which not only make for a better stance but also improve the overall handling and grip.  The car has recently had an alignment and has no mechanical issues to speak of. 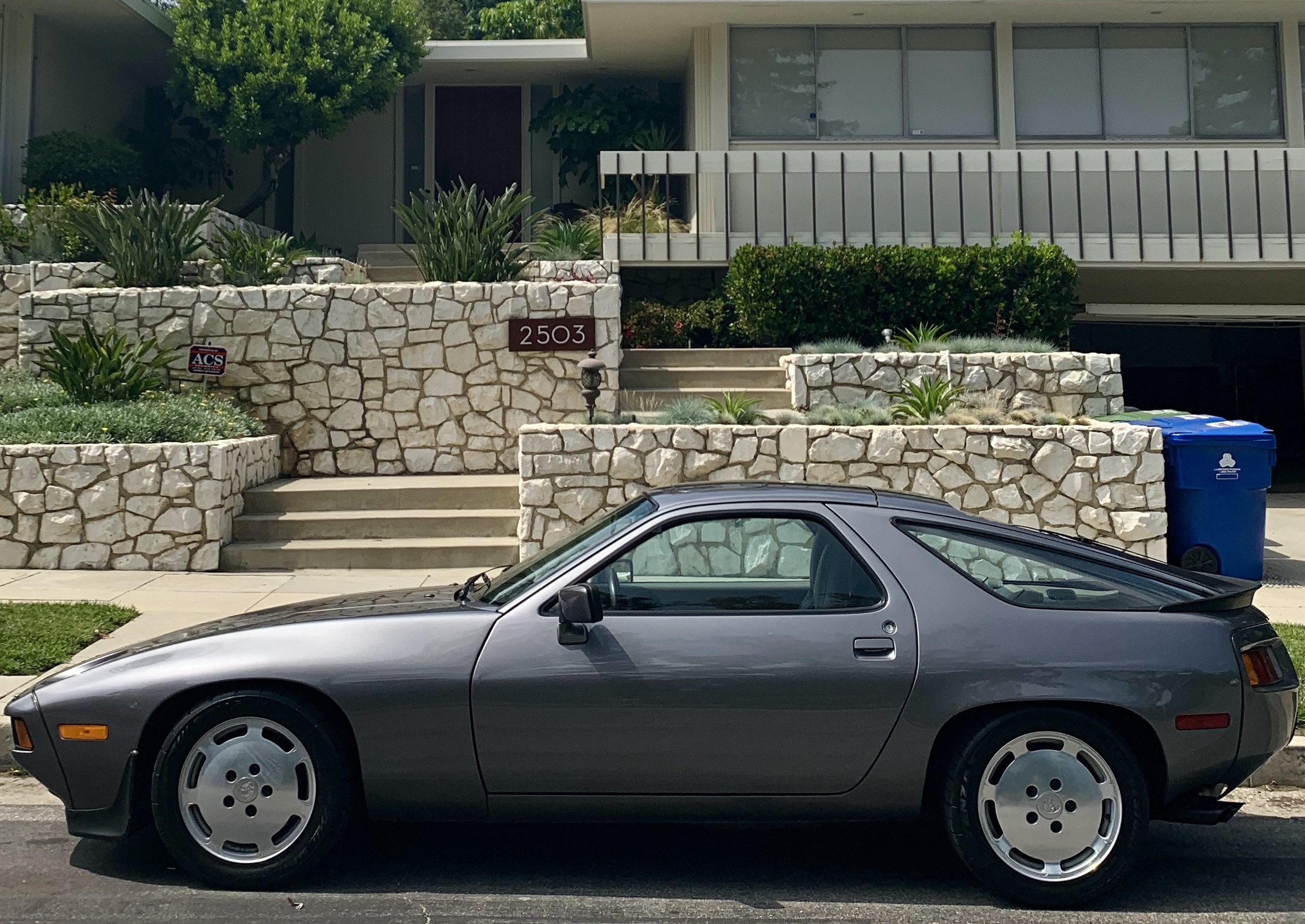 Grand touring cars such as the 928 were some of the most expensive cars on the road at one time.  The 928’s uncanny ability to comfortably transport its passengers at high-sustained speeds set a new standard for the grand touring car.  By adding raw German horsepower to plush and decadent coupes, Porsche had blurred the line between sports car and luxury coupe.  These cars were the pinnacle of both comfort and performance and are coveted by enthusiasts to this day. 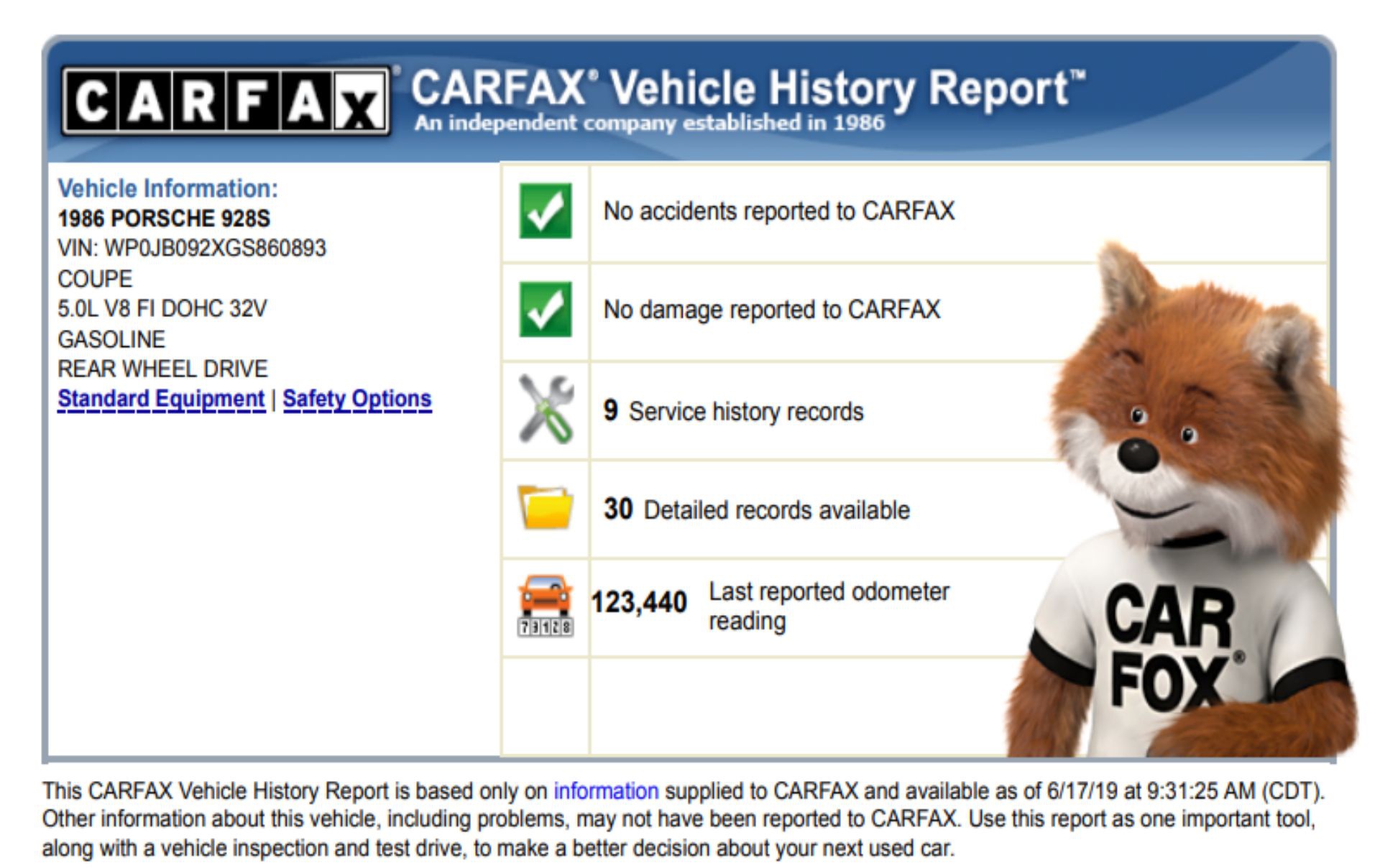 A clean and detailed Carfax report indicates that this 928s has had an accident free life on the roads of California.  Comprehensive service records from the past 12+ years have been compiled and confirm that this car has received all due services and inspections.  Included in this sale are all original books including owners manual, service manual, dealer listing, radio instructions, dealer locator book and envelope.  The seller will also include a restored and unused steering wheel and shifter as well as an OEM radio and amp in the sale.  The opportunity to own such a well-maintained and complete 928 is becoming increasingly rare, as the market for these cars grows daily.  Do not miss out on this solid, ready to drive 928s!