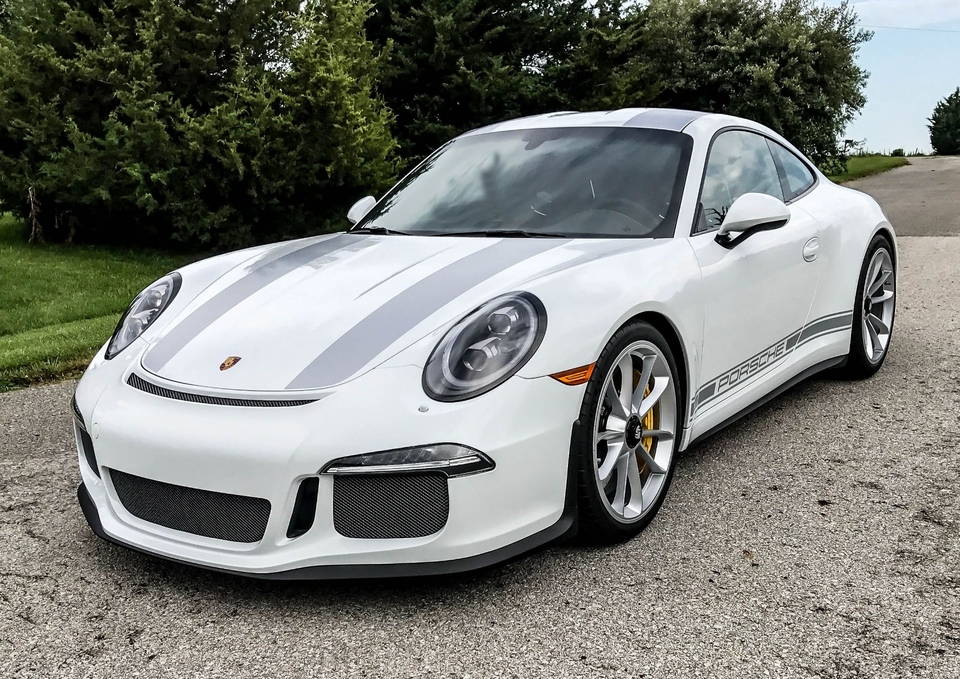 We are pleased to present this 2016 Porsche 911 R finished in white over a black leather and houndstooth interior.  Representing one of the rarest modern Porsche’s on the road, the 911 R was introduced in 2016 and limited to a production run of only 991 units worldwide.  Featuring extensive weight savings measures and a 500 HP naturally aspirated flat-six engine which is mated to 6-speed manual transmission, the 911 R is an unadulterated sports car for the driving purist.  This 2016 example is one of only 273 cars delivered to the U.S. and is said to be the only finished in this particular configuration.  Showcasing exclusive options including the Front Axle Lift System and a single-mass flywheel with reinforced clutch, this one-owner 911 R is now being offered for auction in brand-new condition showing only 17 delivery miles on the odometer. 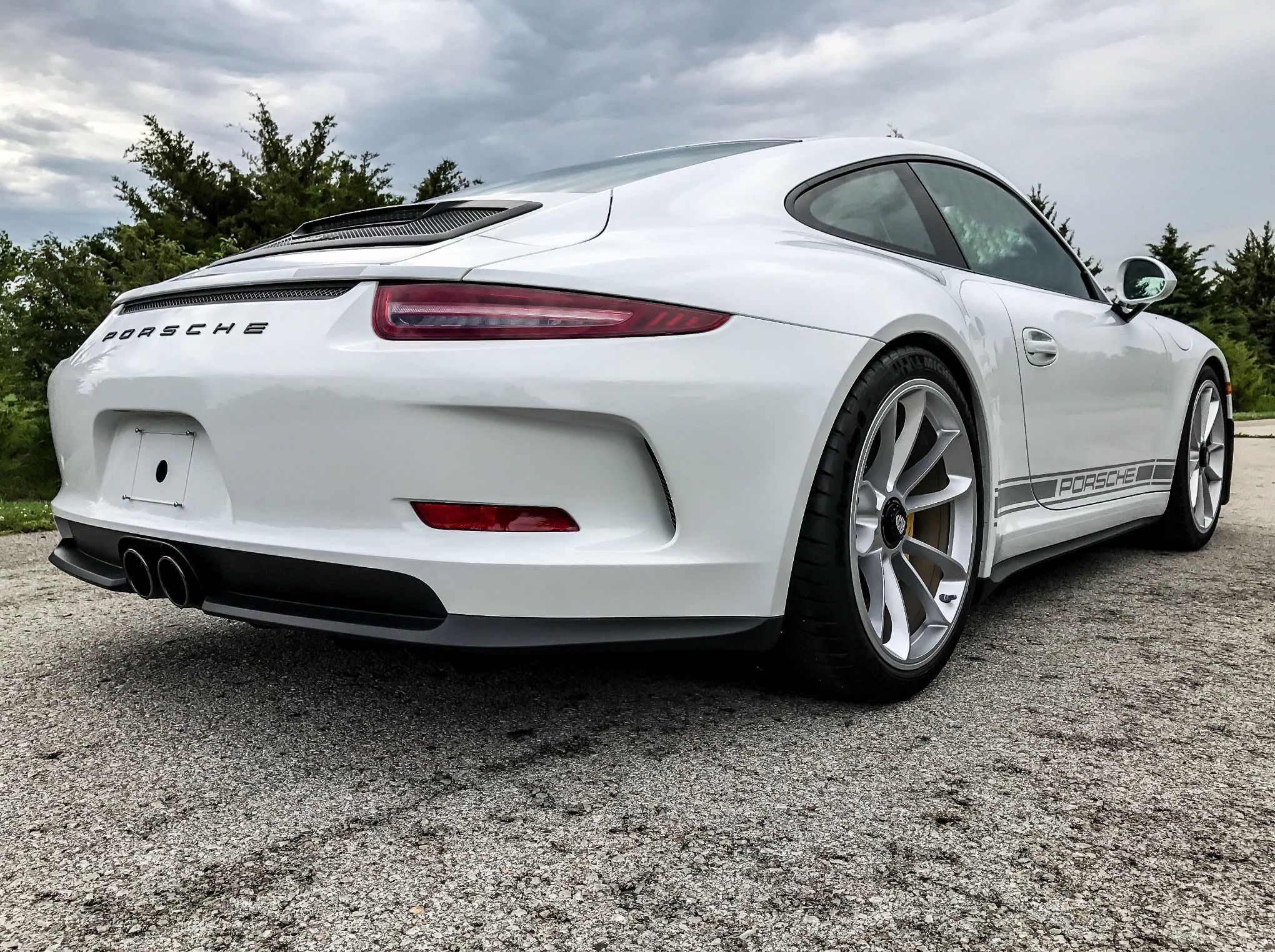 This 911 R is finished in white with a distinctive silver Porsche livery.  Having never been subjected to roadgoing conditions, this car is said to be entirely as new with full exterior ceramic coating.  Detailed images are provided in the photo gallery.  In an effort to save weight, the 911 R utilizes carbon fiber for its front fenders and luggage compartment lid, magnesium for its roof and titanium for its exhaust.  The 911 R also features a simplified speed-activated rear spoiler which works in conjunction with a fixed underbody diffuser.  This example has been equipped LED headlights in black as well as the Front Axle Lift System which enables the nose of the car to be raised when traversing obstacles.  Yellow PCCB brake calipers complement factory center lock wheels which come dressed in their original Michelin Pilot Sport Cup 2 tires. 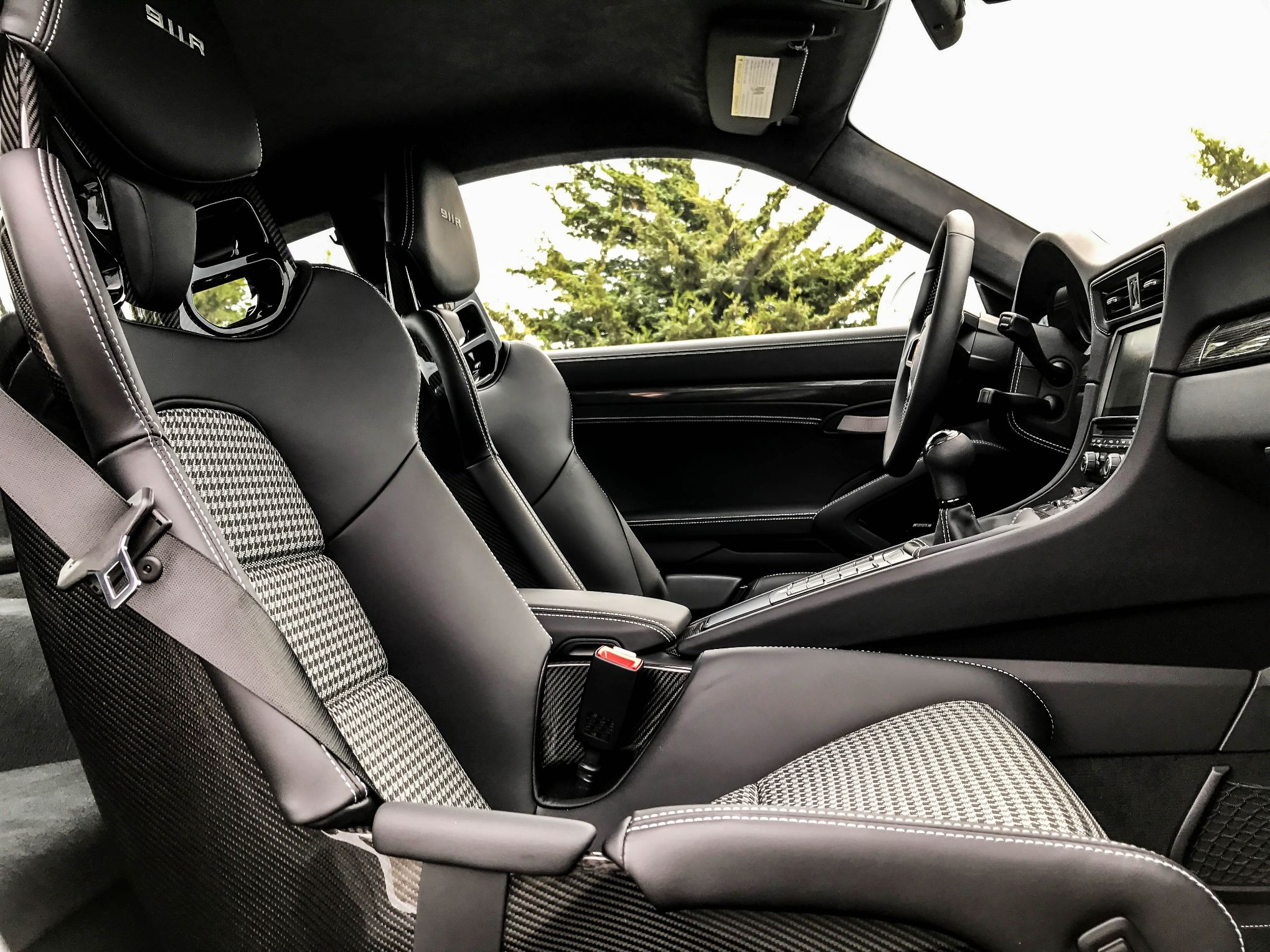 Inside, you will find a Custom Tailored black extended leather and houndstooth interior with deviated stitching in GT Silver.  The lightweight philosophy of the 911 R is carried out throughout the cabin with molded carbon fiber seat backrests, a rear seat delete, interior door pulls and the removal of sound deadening material.  Unique details include nostalgic houndstooth seat inserts, black faced gauges with light green markings and a factory limitation placard denoting this example as #180/991.  A true no-expense spared configuration, this 911 R is accompanied by an original window sticker totaling over $227k which highlights the following exclusive options: 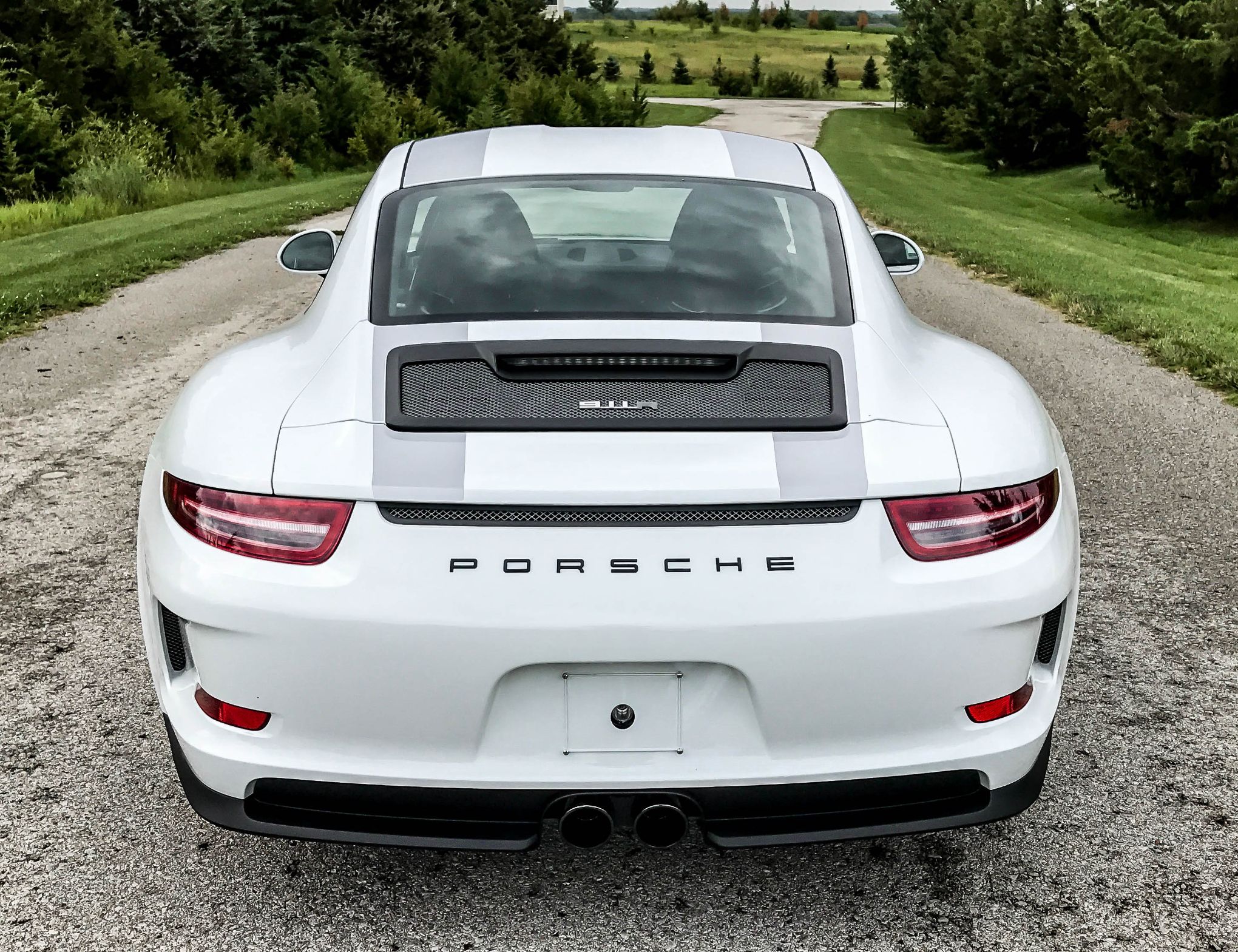 This 911 R offers a potent naturally aspirated 4.0 L flat-six engine which is mated to 6-speed manual transmission with an optional single-mass flywheel and reinforced clutch.  500 HP is sent to the rear wheels making for a 0-60 time of approximately 3.7 seconds and a claimed top speed of 200 MPH.  Standard performance features include a limited-slip differential and robust PCCB ceramic composite brakes which offer consistent stopping power throughout the most demanding driving conditions.  With only 17 delivery miles showing on the odometer, this 911 R is just awaiting its next owner. 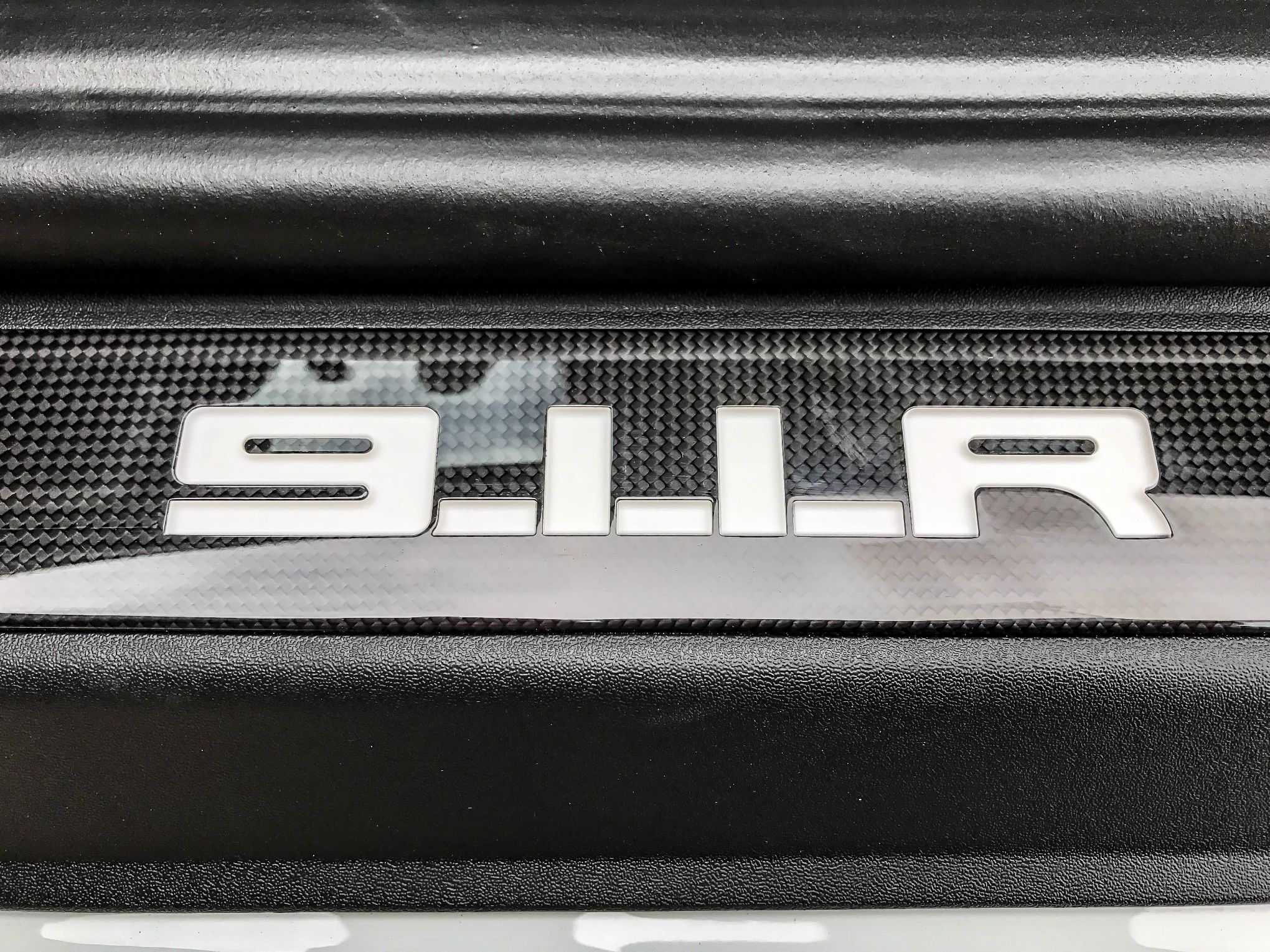 Hailed as one of the greatest driving modern Porsche 911’s, Car and Driver claims “The 911 R is simply spectacular to drive. It is a joyous thing. And it’s proof positive that plenty of Germans know how to hang it all out there and just have a good time.” 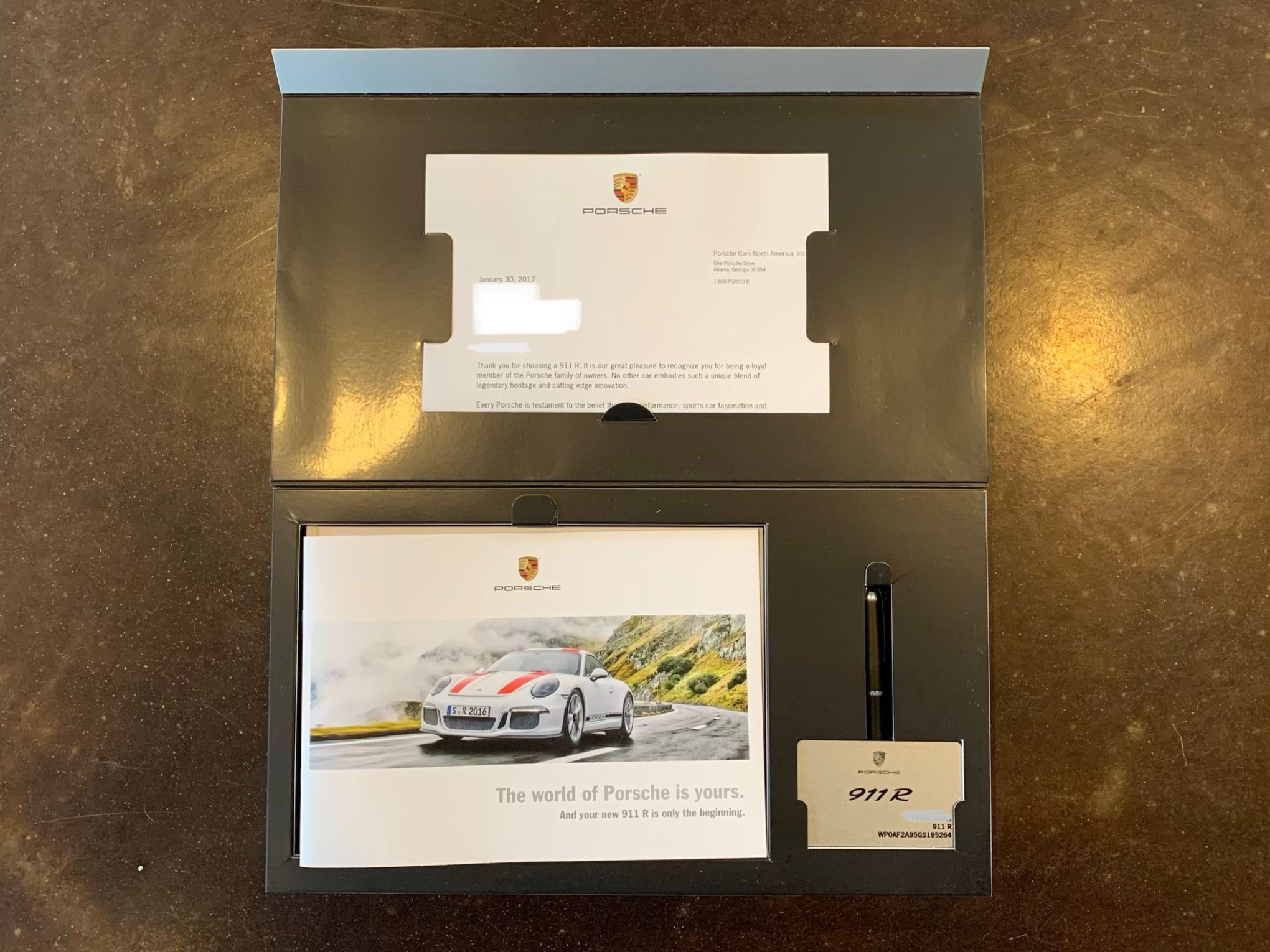 The sale of this rare 911 R will include a set of two keys, original books and tools, the window sticker and a Porsche Certificate of Authenticity.  Do not miss out on this opportunity to own a beautifully configured example of one of the most highly collectible modern Porsche’s.