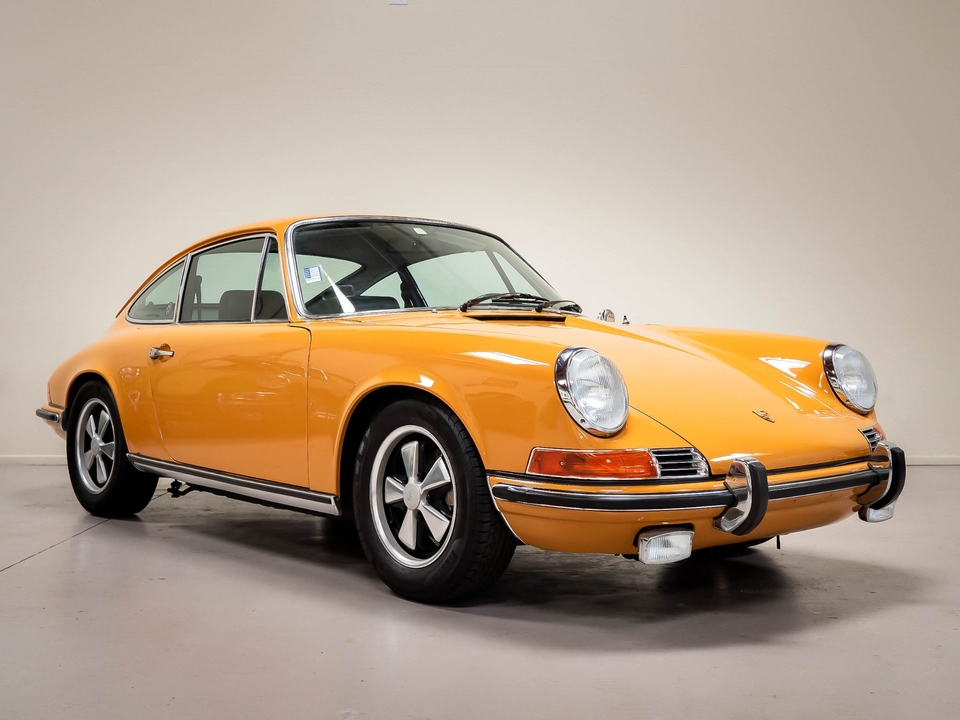 Up for auction is this stunning 1969 Porsche 911 S MFI finished in Bahama Yellow over a black interior.  Originally imported to the US, this 1969 example spent most of its life in sunny Southern California where it underwent a complete nut and bolt restoration in 2008.  Representing the top-range Porsche model of its day, this 911 S highlights a long wheelbase configuration and a coveted 2.0L mechanically fuel injected flat-six engine.  This 911 S bears approximately 6k miles on its rebuilt engine and is now being offered for auction in a beautifully restored, concours-ready state. 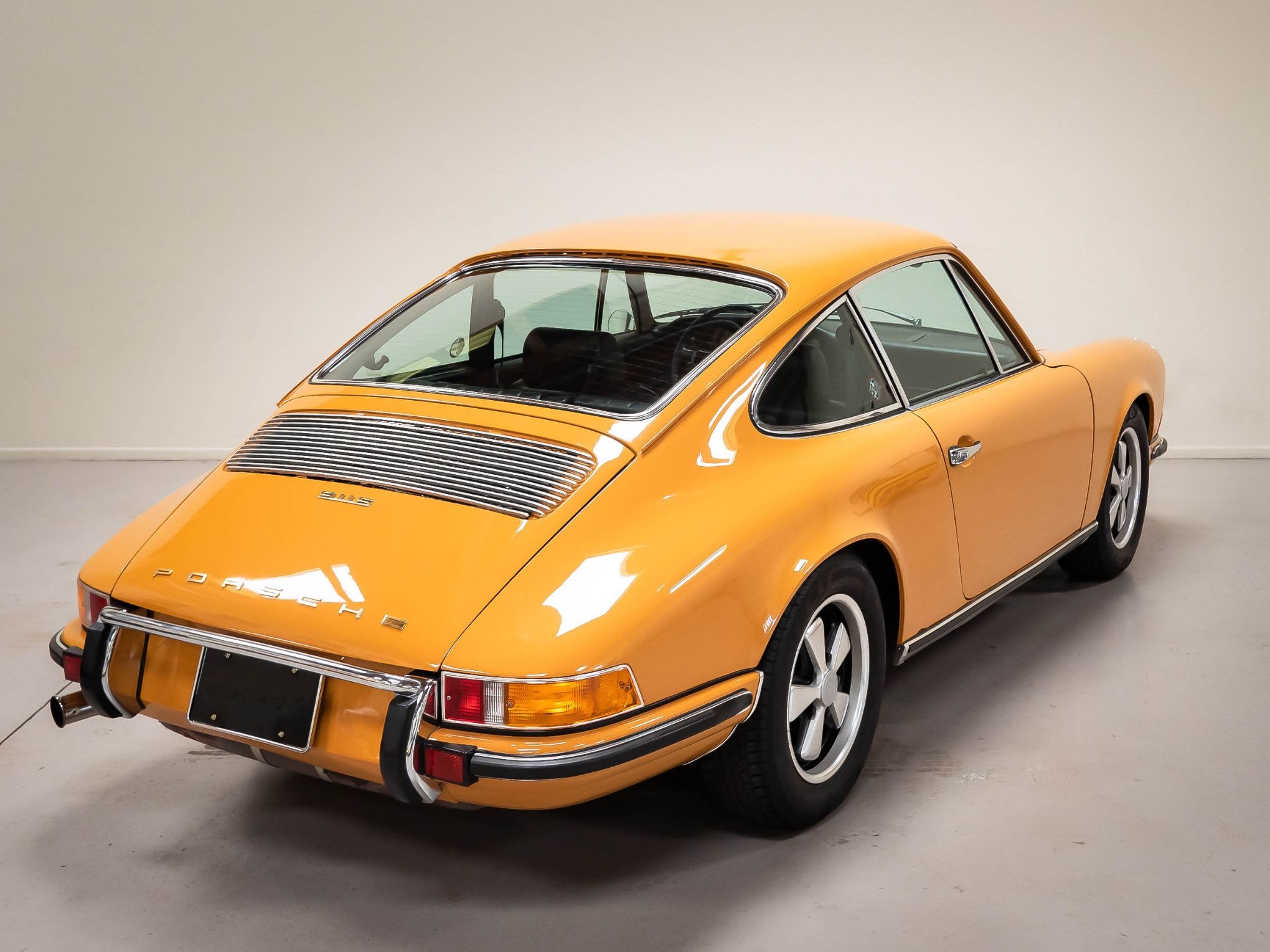 This 911 S has been taken down to bare metal and professionally refinished in its Porsche COA verified original color of Bahama Yellow.  The exterior finish, trim and brightwork are all shown to be in excellent condition (detailed images are provided in the photo gallery).  Noteworthy details include a factory rear bumper overrider, front fog lights and a radio antenna.  This 911 S is complete with factory Fuchs wheels which are currently dressed in period correct Pirelli tires. 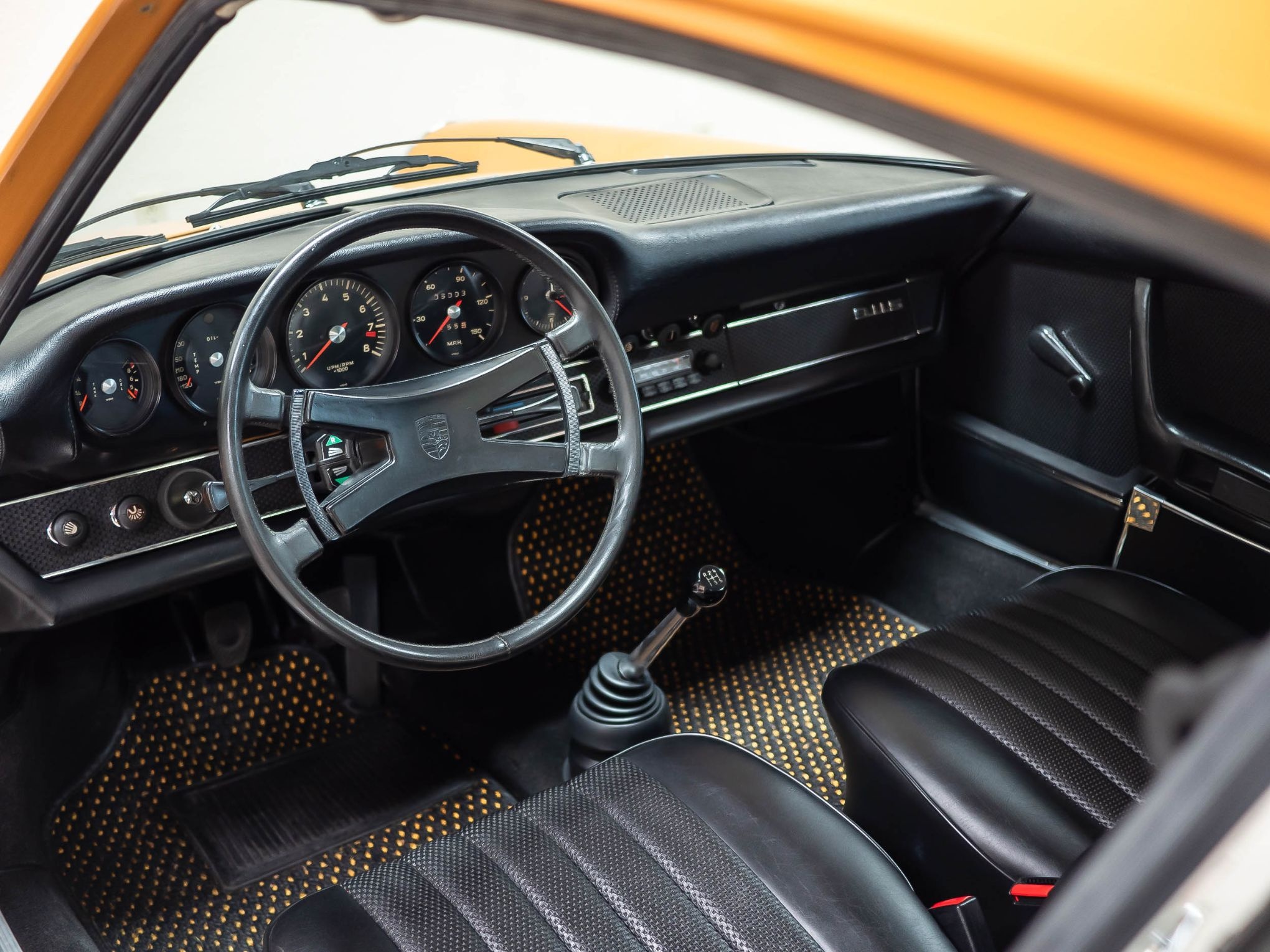 Inside, the black upholstered cabin has been painstakingly restored to period correct standards.  During the restoration, all interior components were either replaced or refurbished to ensure an as-new result.  This 911 retains a Blaupunkt “Frankfurt” radio and the seller notes all gauges, electrical components and accessories to be fully functional. 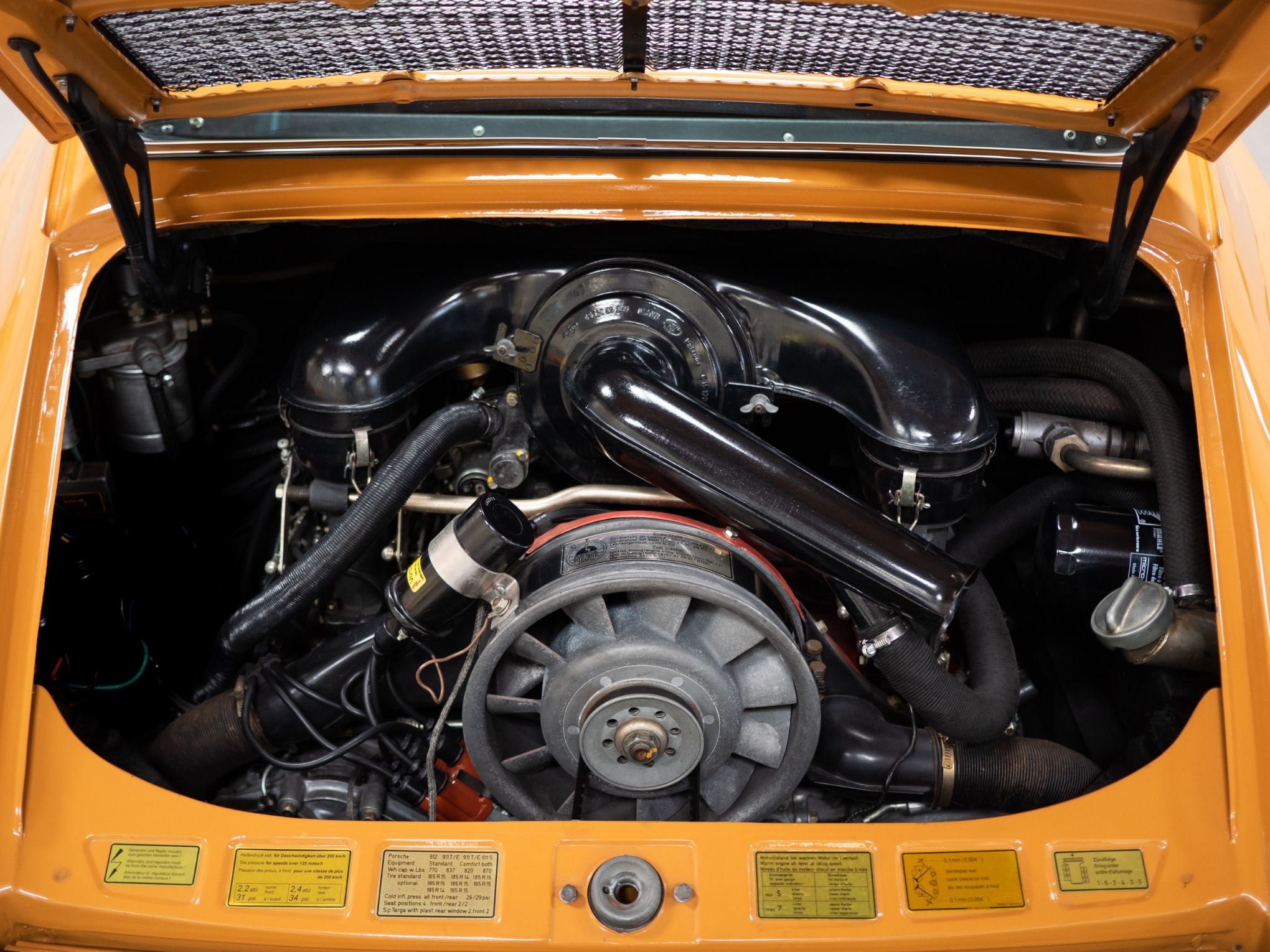 This 911 S carries its original matching numbers 2.0L mechanically fuel injected flat-six engine. Approximately 170 HP is sent to the rear wheels by way of a number’s matching 5-speed 901 manual transmission.  All suspension and braking components have been rebuilt to factory specifications and there are no mechanical modifications to speak of.  Routine maintenance has always been carried out and the throttle bodies, linkage and intake stacks were said to have been overhauled in 2013.  Having received a full engine rebuild during the restoration process, this 911 S is reported to be in fantastic driving condition just waiting to be enjoyed by its next owner. 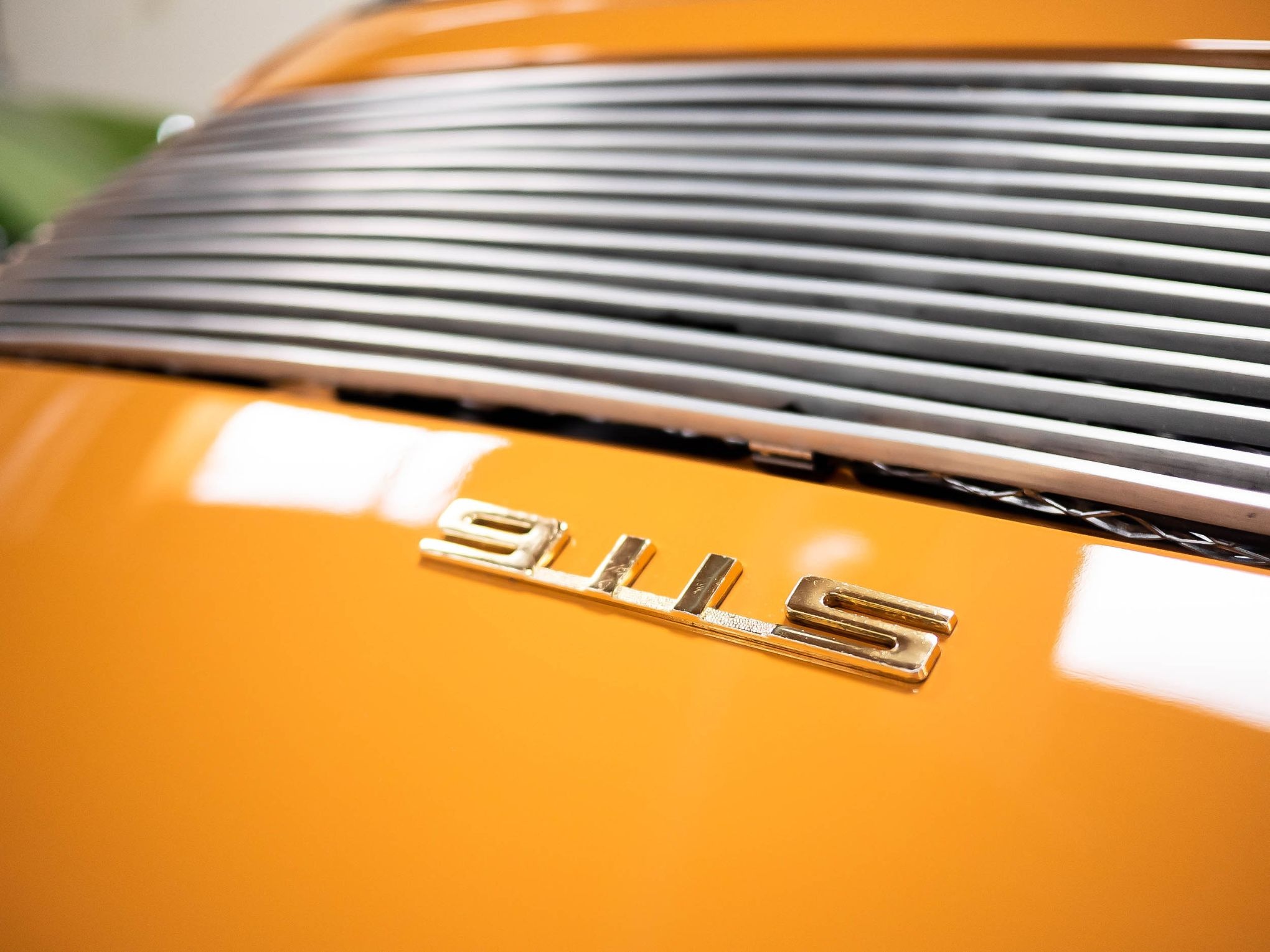 In a vintage Car and Driver article discussing the 1969 911 S, Mark Donohue was quoted as saying "Although it's impossible to identify these cars in profile, as soon as you light the fires there's no doubt which one is the top of the line. That rasping, cracking exhaust note on the 911S really tells you right off it's not fooling around." 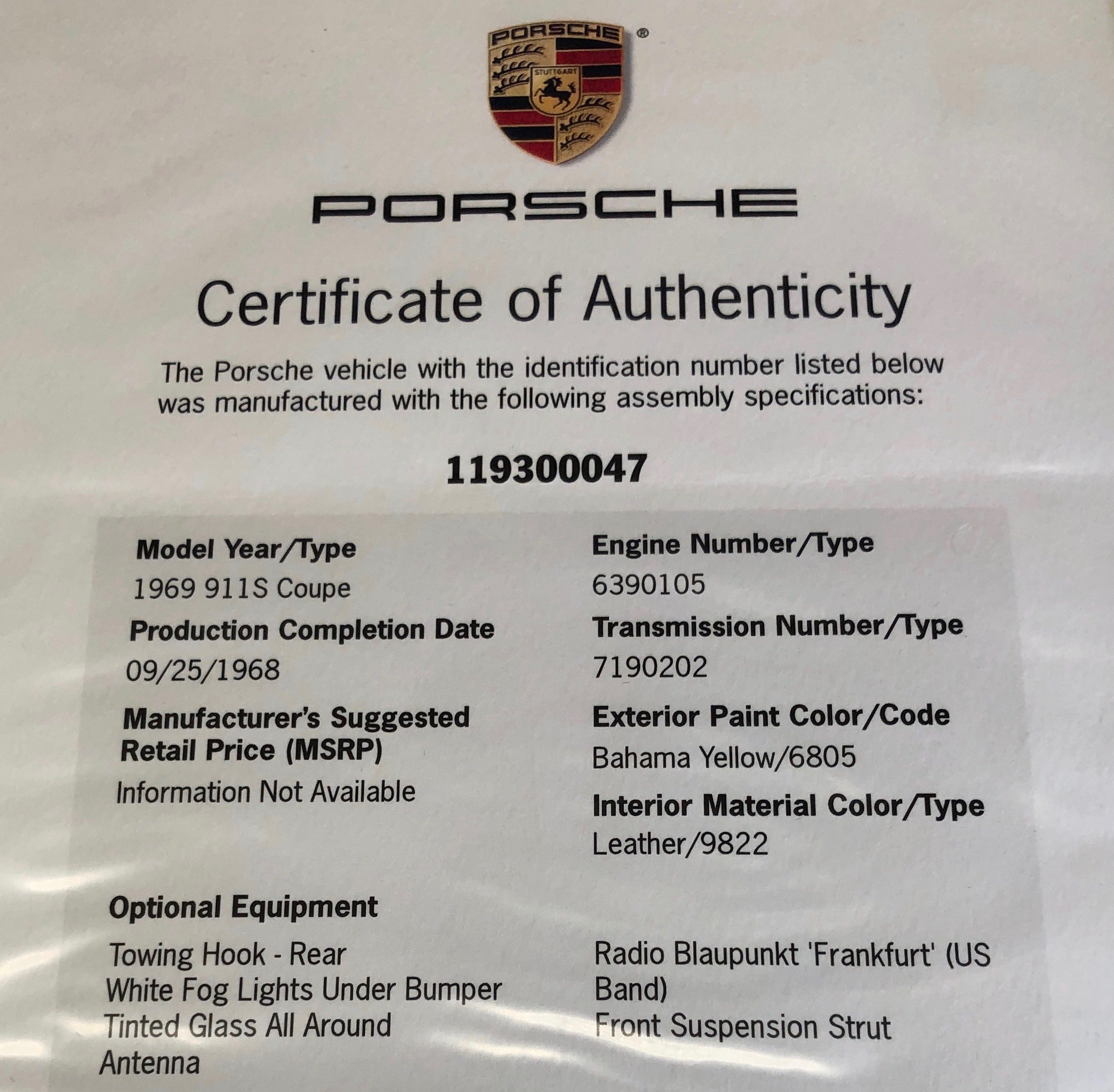 The sale of this impeccable 911 S will include a set of two keys, original books and accessories, service records and a Porsche Certificate of Authenticity.  Do not miss out on this incredible opportunity to own one of the most sought after and collectible air-cooled 911’s on the road.