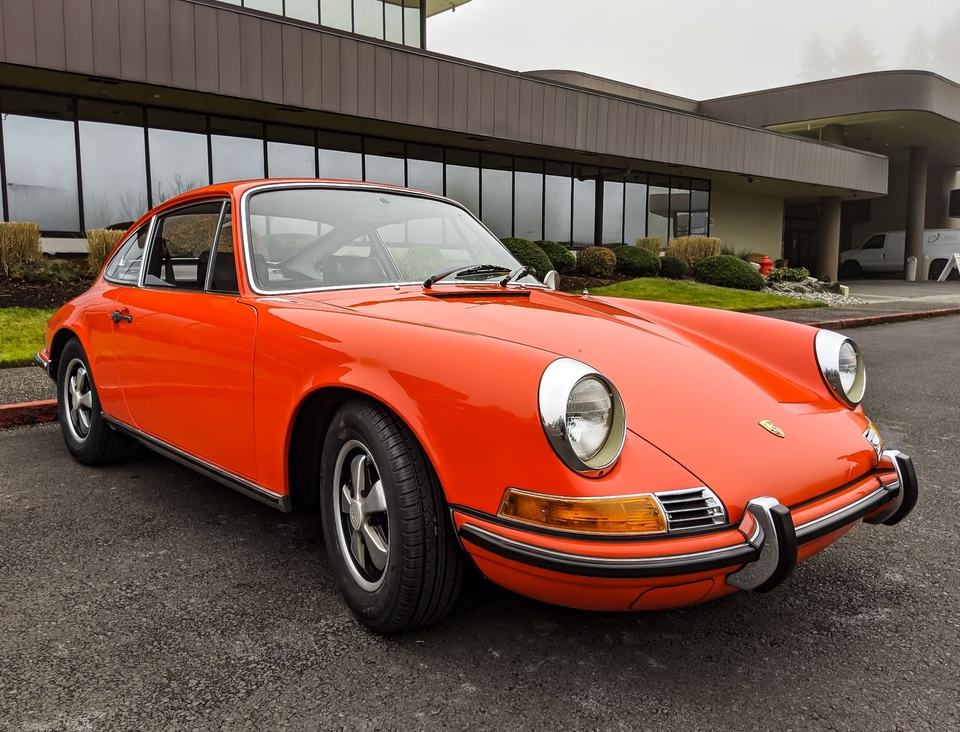 Up for auction is this 1969 Porsche 911T finished in Tangerine.  Representing the final production year of the original 2.0 L 911, this 911T is factory optioned with a 5-speed manual transmission and “Comfort Equipment” which includes 911S-type trim.  Well over $13,000 has been invested over the last 18 months including some cosmetic refurbishment, a major engine service, and new Koni shocks.  Originally imported to Portland, Oregon where it remains to this day, this thoroughly sorted 911T is now being offered in excellent running order accompanied by a Cardex showing a numbers matching drivetrain. 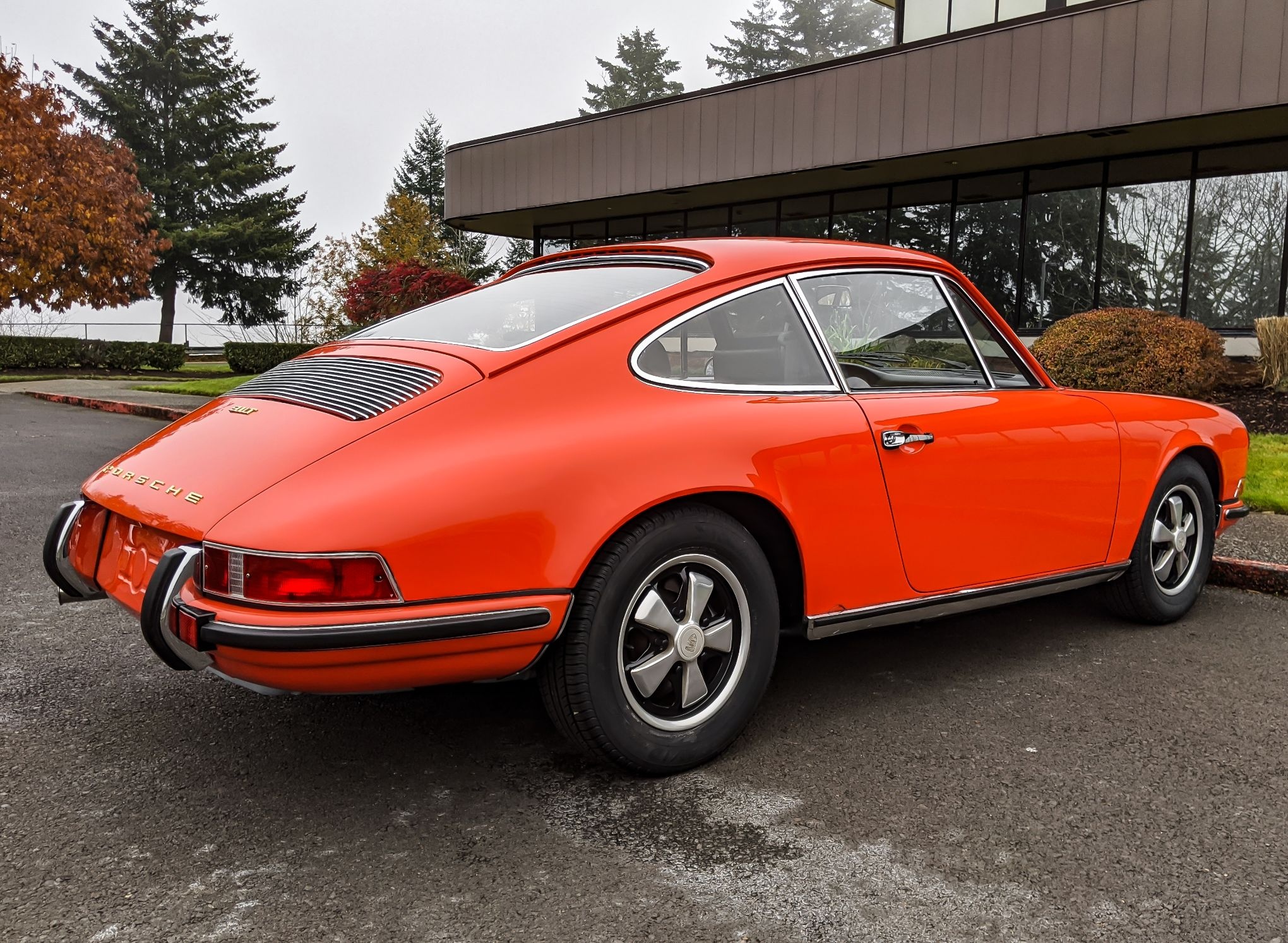 This 911T is presented in its factory specified color of Tangerine (6809).  The front fenders were refinished under previous ownership within the last 2 years and the current owner recently had the hood and both bumpers professionally repainted at a cost of over $3500.  The front suspension pan and lower battery tray were also previously replaced due to battery acid corrosion.  The car is said to be in excellent structural condition and the only cosmetic imperfections are noted as a few small touch-ups throughout the body, minor windshield pitting, and general patina. 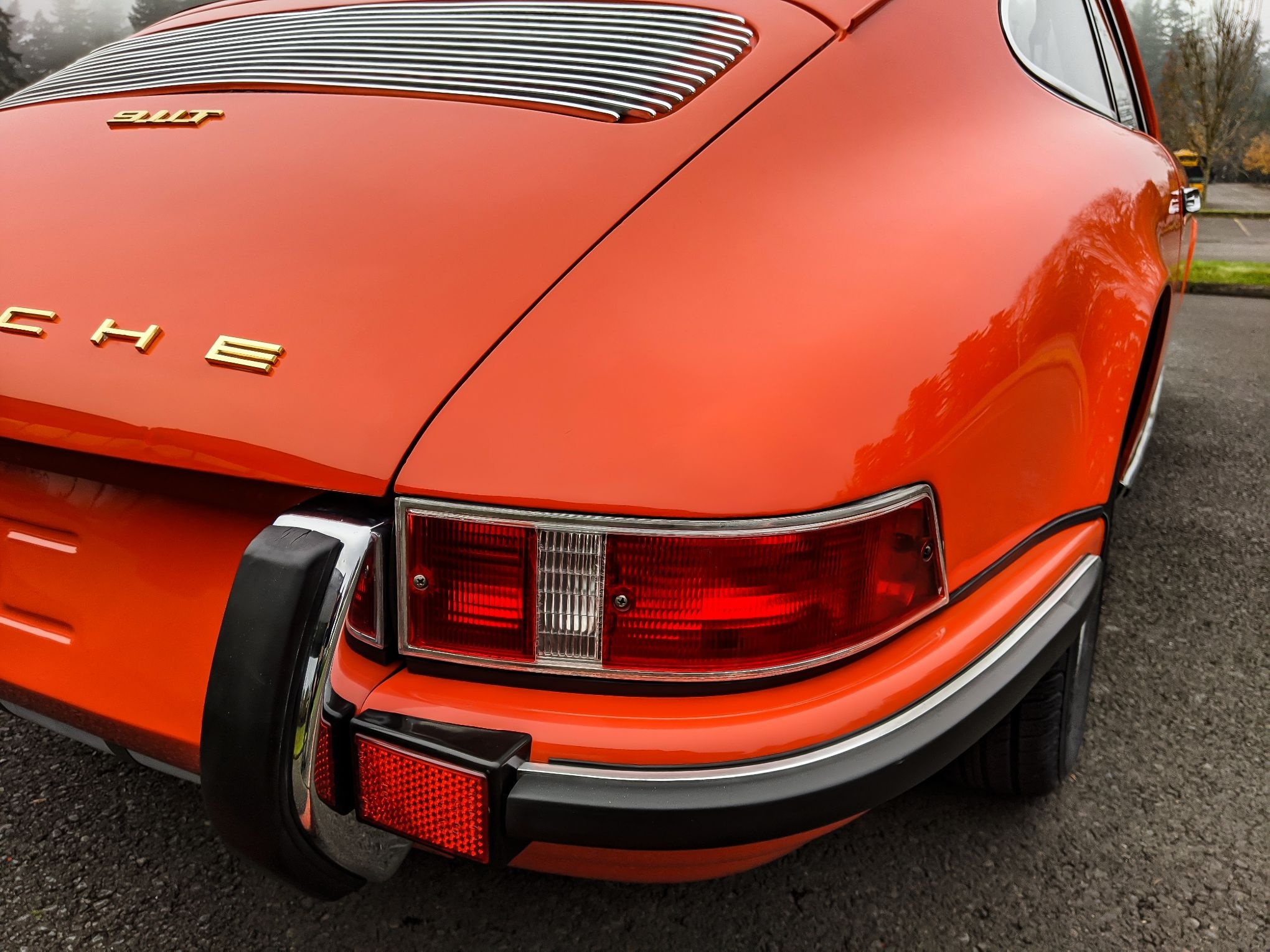 With the optional “Comfort Equipment” this example features 911S-type equipment including bumperettes with rubber overriders, 911S rubber moldings, chromed rocker panels, gold rear lettering, 14” alloy wheels, vented rotors, and aluminum front brake calipers.  The Fuchs wheels are dated from late 1968/early 1969 and are believed to be original to the car.  New factory-spec Yokohama tires have been also been installed within the last 50 miles. 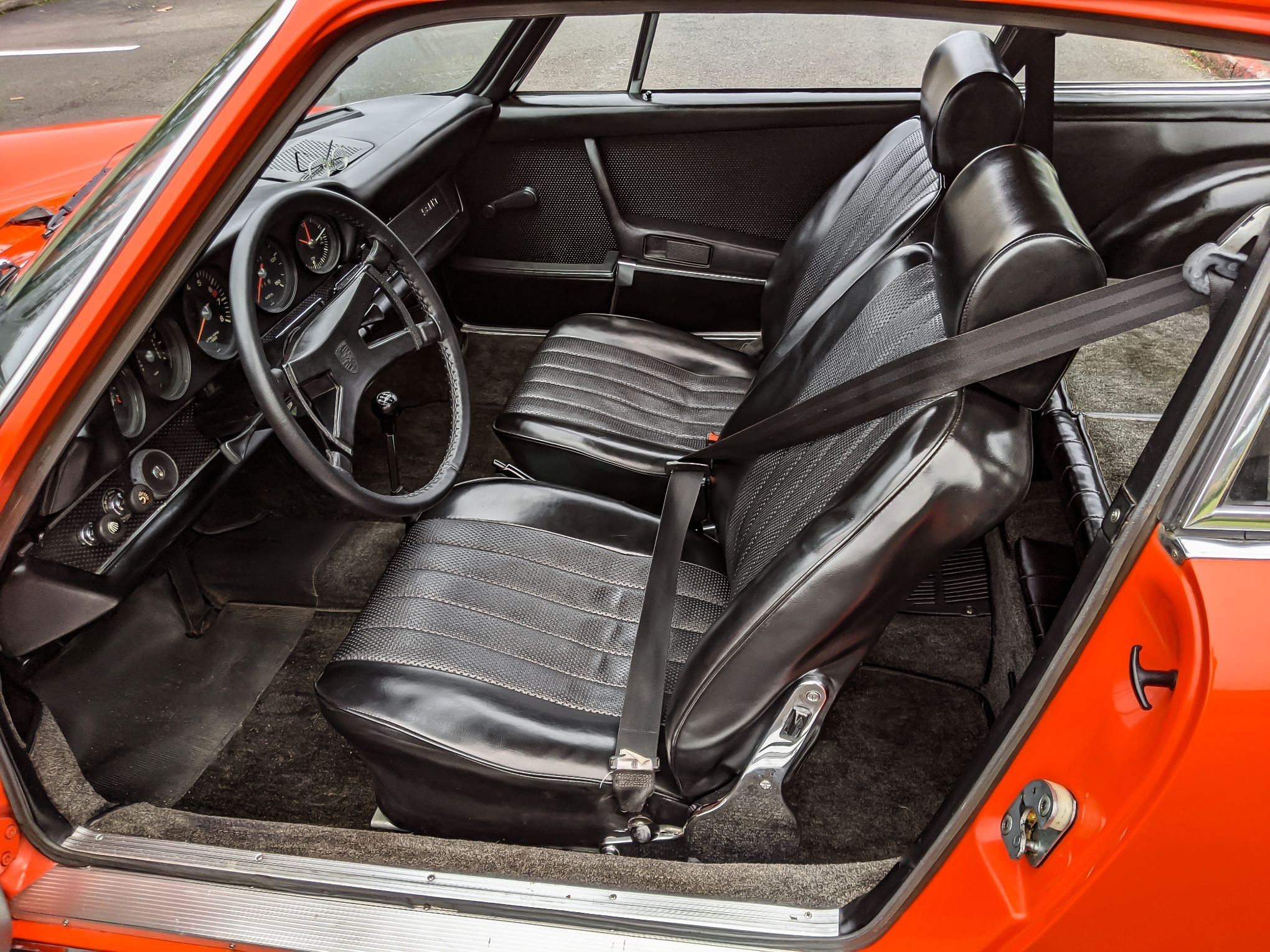 The Black leatherette interior is described to be in very nice condition with only minor signs of wear visible on the carpets and interior upholstery.  The cabin is noted to be highly original with unique “Comfort Package” features including a leather-bound steering wheel, aluminum doorsills, velour carpeting, and 911S-type instrumentation. The functional Blaupunkt radio and rear seat belts (1969 dated) are original and a new Hirschman Antenna was added. The door pockets have also been replaced under the current ownership at a cost of approximately $2000.  There is a crack in the dash speaker grille and the clock is said to be nonfunctional, although the rest of the gauges and accessories in the car are said to be working properly. 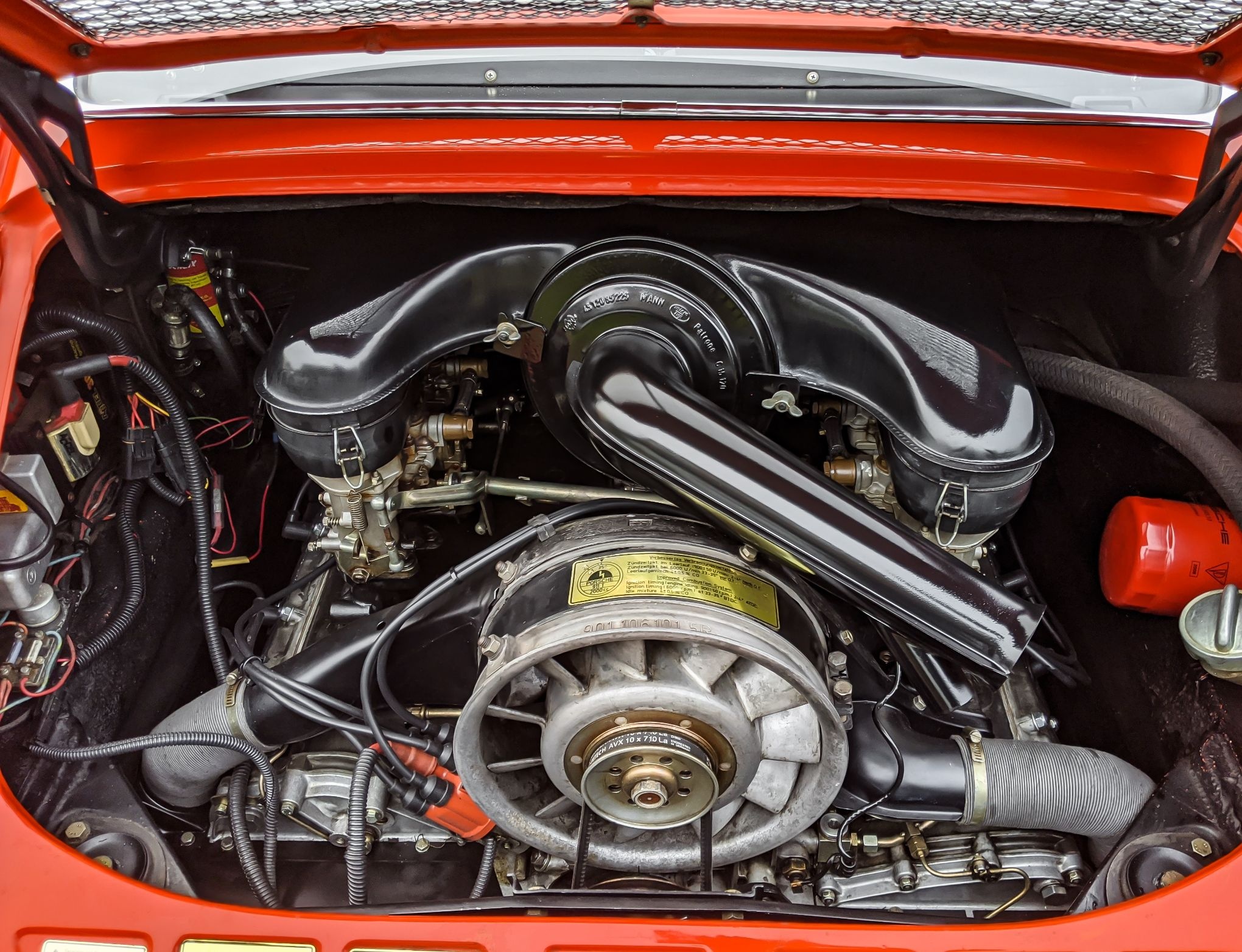 An air-cooled 2.0 L flat-six carbureted engine sends approximately 110 HP to the rear wheels by way of an optional 5-speed manual transmission.  The Cardex suggests that this example retains its factory numbers matching engine (#6196605) and transmission (#7196736).  An updated modern ignition system has been installed along with a Carrera chain tensioner upgrade, Koni shocks and struts, and a single Odyssey AGM battery.  Under previous ownership within the last 2 years, approximately $8,000 was spent on a mechanical service which included valve adjustments, a fuel system refresh, new wheel bearings, shocks, and struts.  Since the current owner’s purchase, an engine-out service and reseal has been performed in addition to a rebuild of the transmission with new clutch components.  Most mechanical systems have been recently refreshed and the seller indicates this 911 to be in exceptional driving condition. 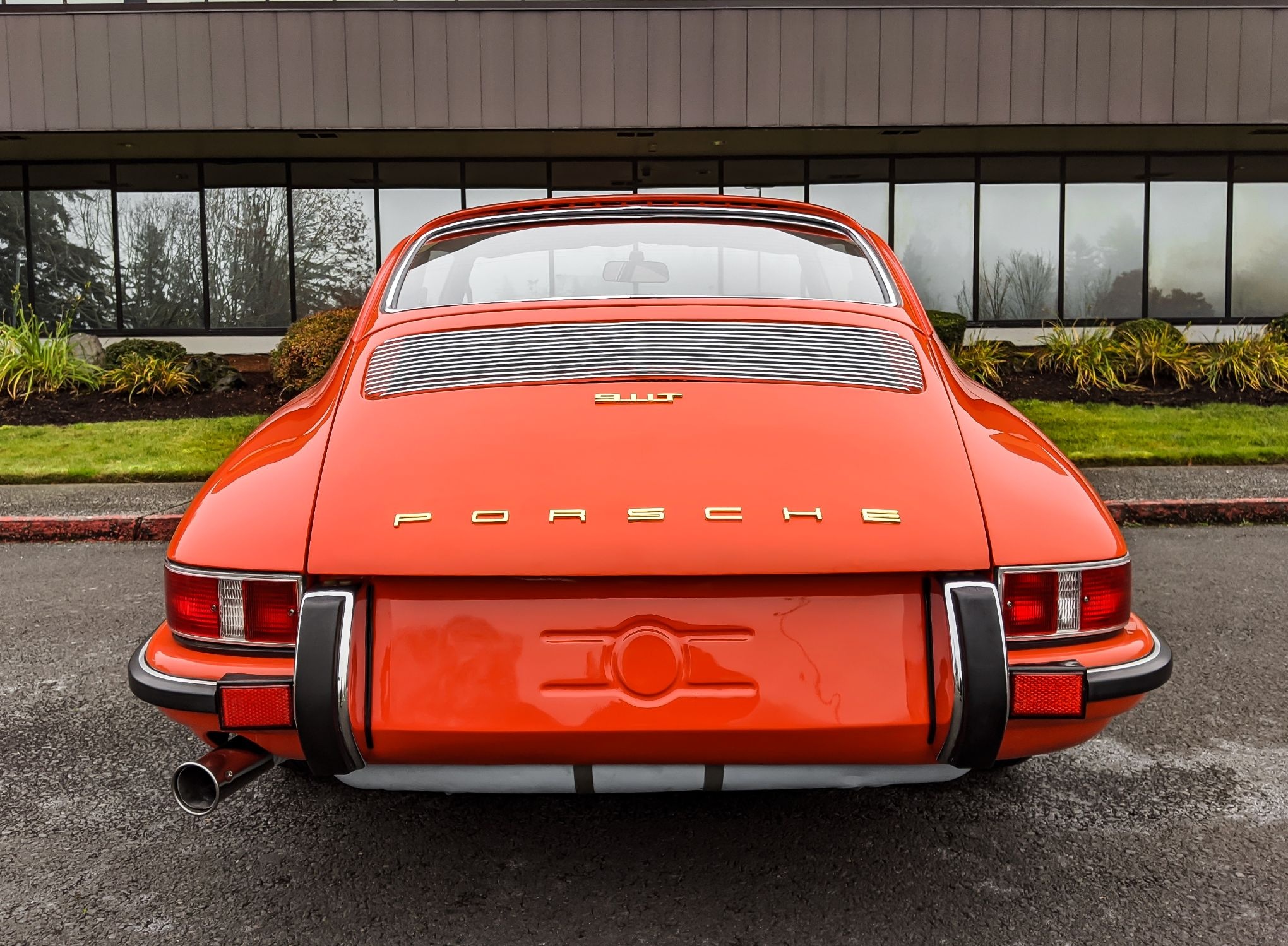 This sale will include a complete toolkit with replacement screwdrivers, a spare Fuchs wheel, a jack, the original owner’s manual, a set of 2 keys, a Hirschman antenna key, and a Cardex.  For any enthusiast of early Porsche 911’s, this beautifully configured 911T is not to be overlooked.