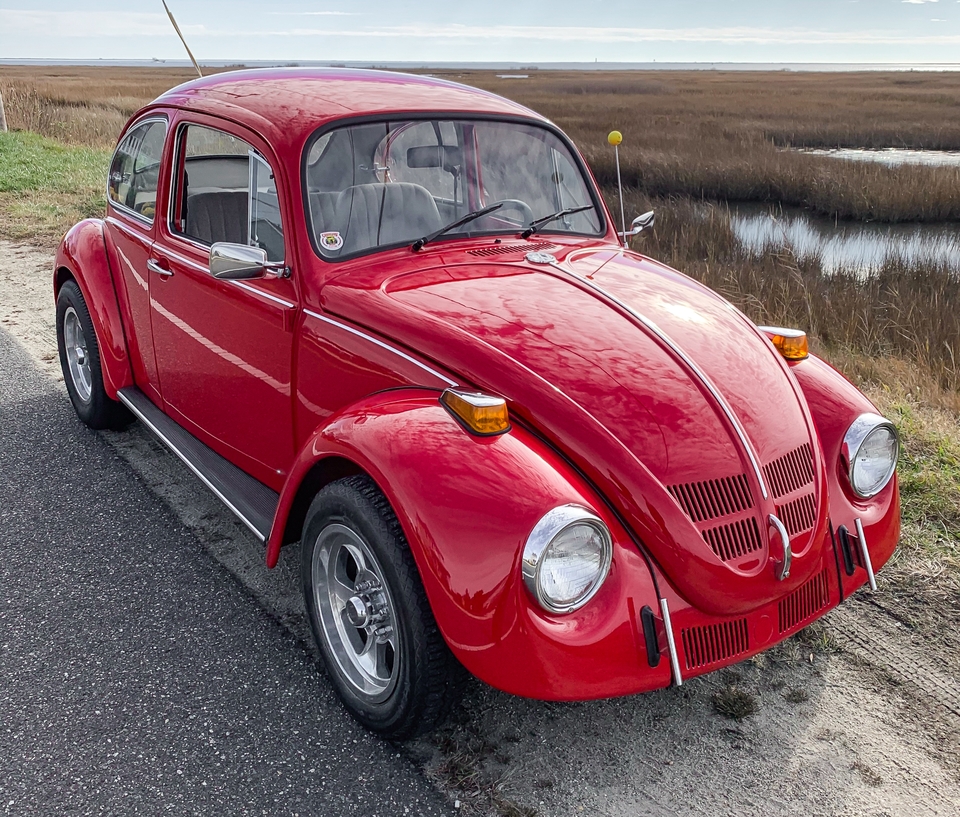 Up for auction is this custom 1972 Volkswagen Beetle.  Reported to have been built on the West Coast approximately 15 years ago under previous ownership, this Beetle features a Masterbuilt 2” tubular frame, coilover suspension, disc brakes, and a host of high-performance Chevy upgrades including a front-mounted 350 small-block V8 engine rated at 400 HP.  Since the seller’s purchase about 12 years ago, this Beetle has been kept in excellent show-quality with just over 9k miles currently shown on the odometer, which is believed to reflect the total mileage driven since the completion of the initial build.  Offering true American muscle from the iconic Beetle platform, this one-of-a-kind Volkswagen is now being listed by its seller in New Jersey with a clean title. 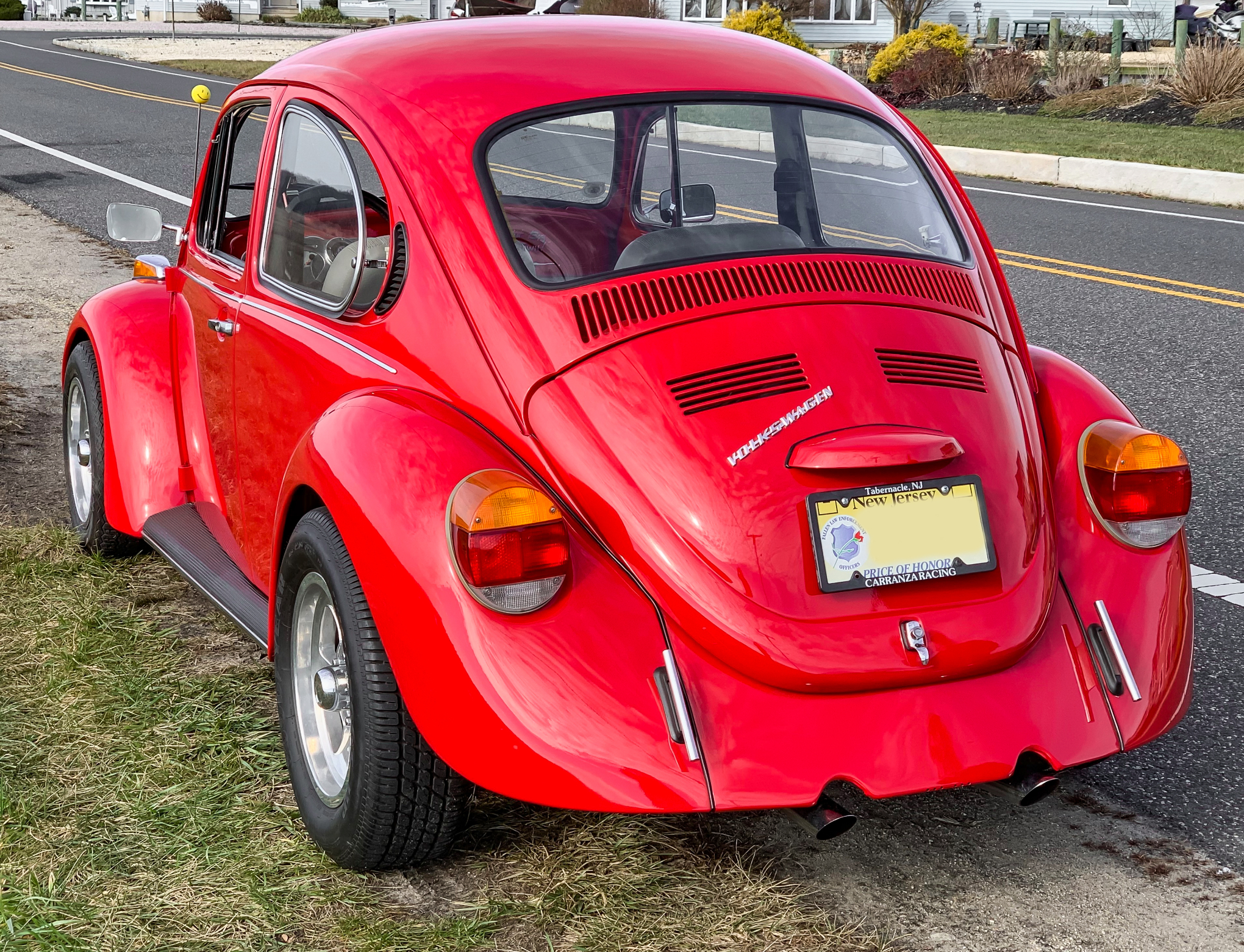 This VW is said to have been completely refinished in Red under previous ownership.  The paint is said to be in excellent condition, detailed images are provided in the photo gallery.  A custom vented hood and front fascia provide extra cooling for the upgraded front-mounted power plant.  This build rides on 15” American Racing wheels that come dressed in older but barely used Goodyear tires. 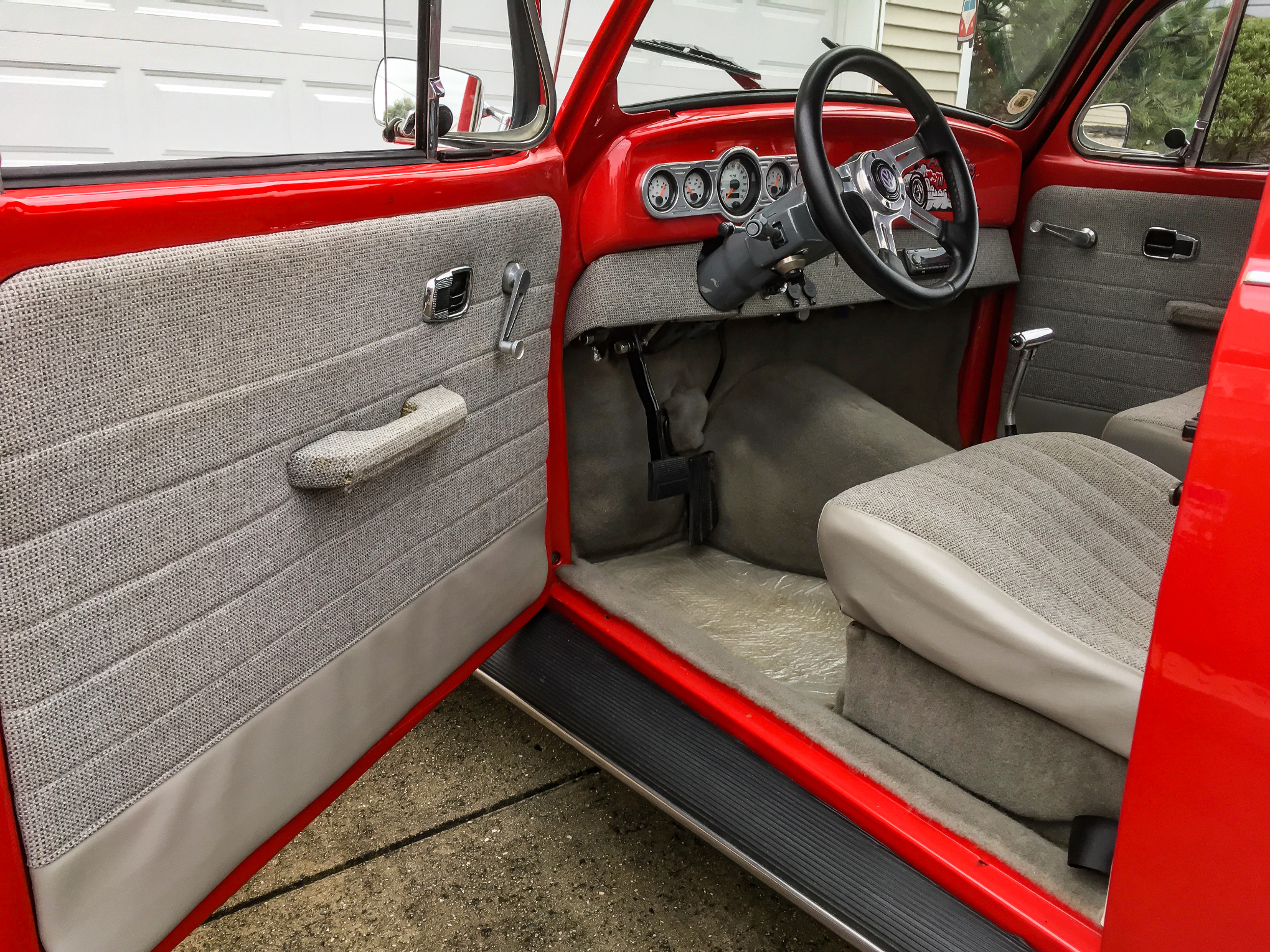 Inside, the cabin has been redone with Gray wool cloth upholstery and matching gray carpets.  A custom painted graphic was added to the dashboard and an upgraded Pioneer sound system has been installed and paired with a 200-watt amp.  Other features include pop-out rear quarter windows, a Chevy tilt steering wheel, a custom dashboard and gauges, and a Mustang automatic gear selector.  All gauges and accessories are said to be fully functional. 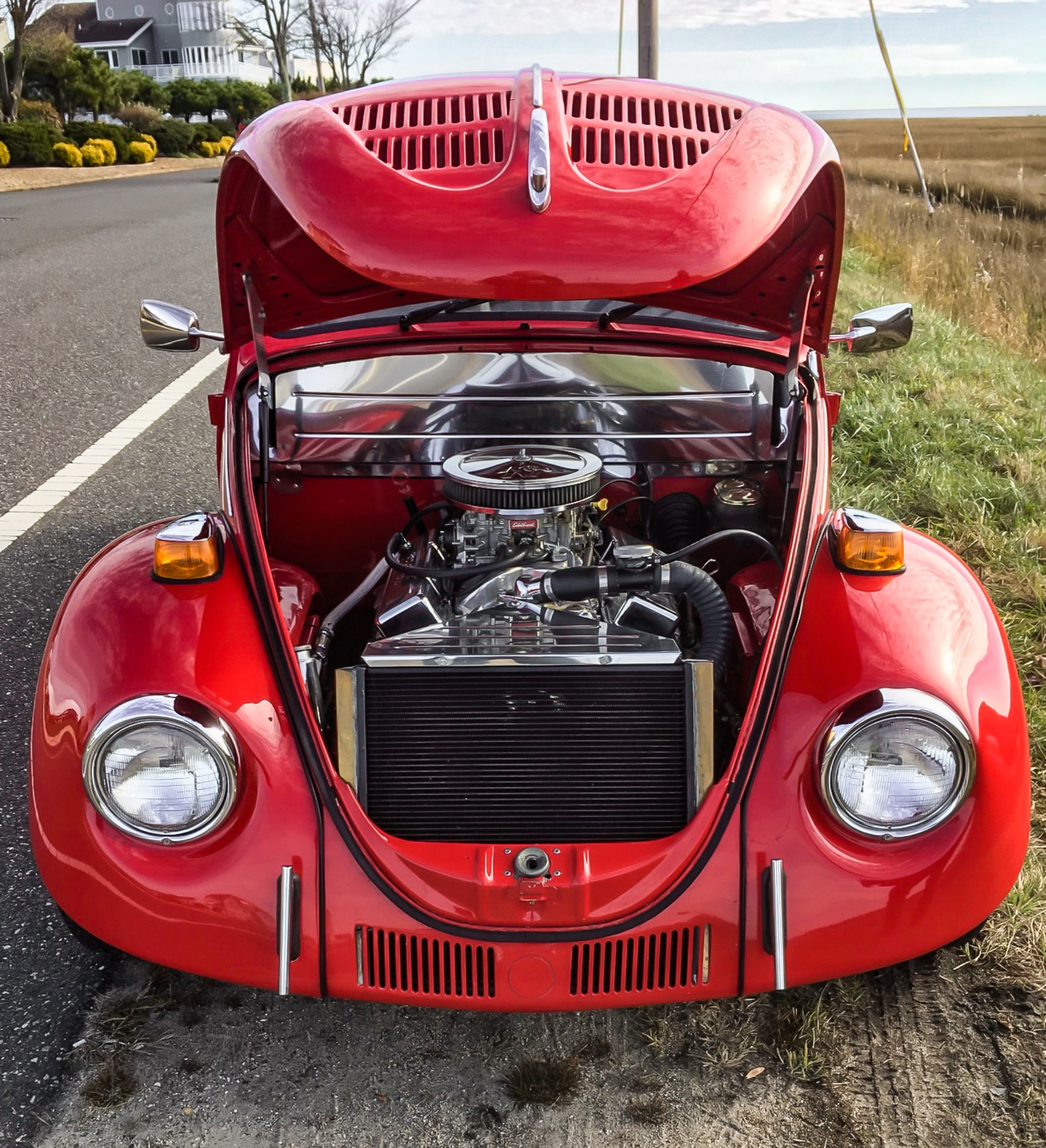 During the initial build, this Beetle was outfitted with a front-mounted 350 small block Chevy engine featuring a polished Edelbrock intake manifold and Holley carburetor.  Other engine features include a US radiator with an overflow tube and electric fan, a rear-mounted 16-gallon fuel cell, and a custom dual exhaust.  A claimed output of approximately 400 HP is sent to the rear wheels by way of a GM 700R 3-speed automatic transmission with an S10 Chevy 10-bolt rear with Positraction.  Other performance upgrades include S10 Chevy spindles and shortened axles, ’63 Corvette tie-rod ends, AVCO upper and lower control arms, S10 Chevy disc brakes, and AVCO coilover shocks.  Proper routine maintenance is said to have been addressed under the current ownership and this Beetle is said to be in excellent turn-key driving condition. 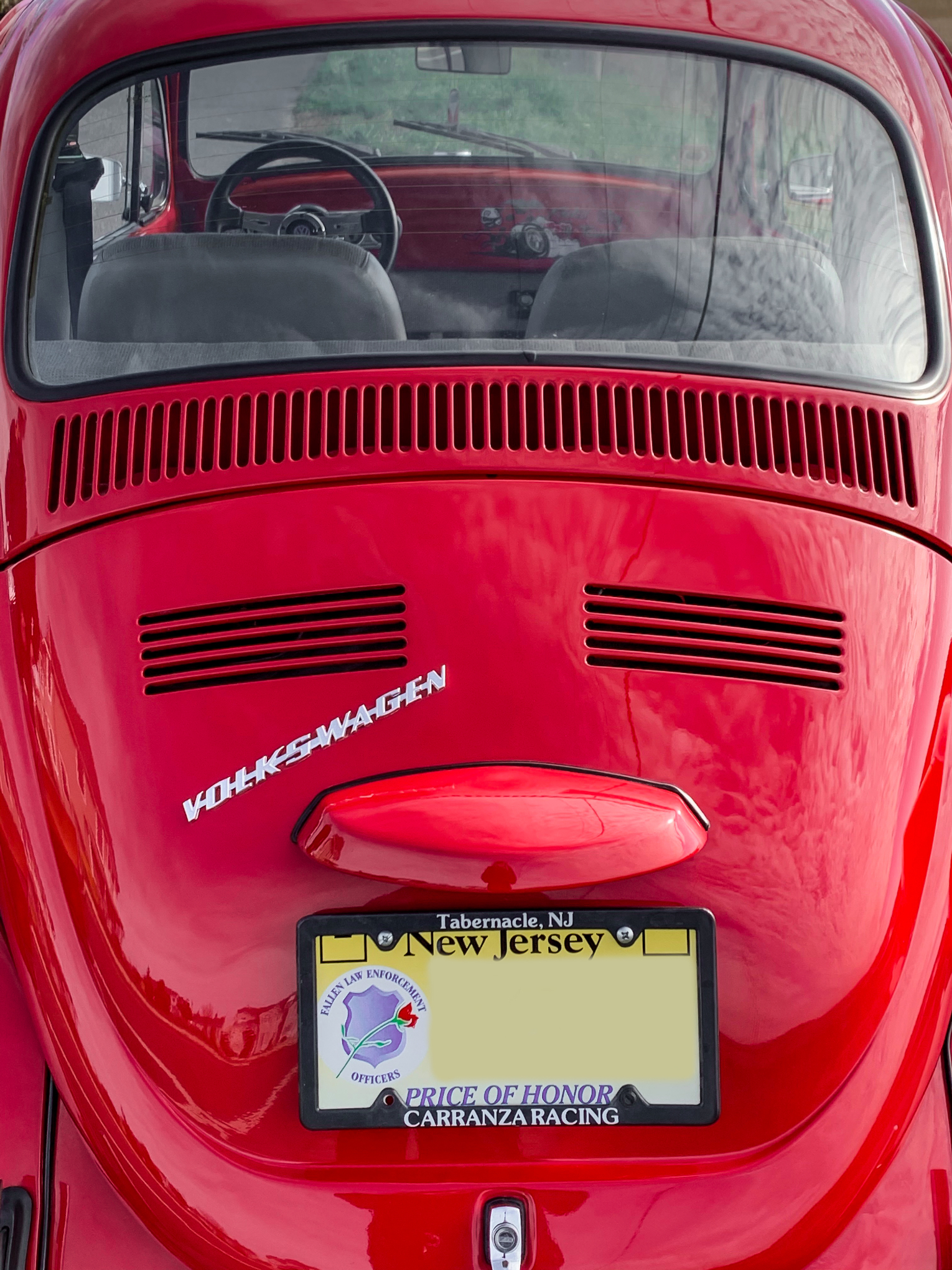 This sale will include a set of 6 keys (2 keys each for ignition, door locks, and trunk), and a clean “manufactured car” title.  If you are looking for visceral power and classic looks, this V8 Beetle makes a perfect choice.