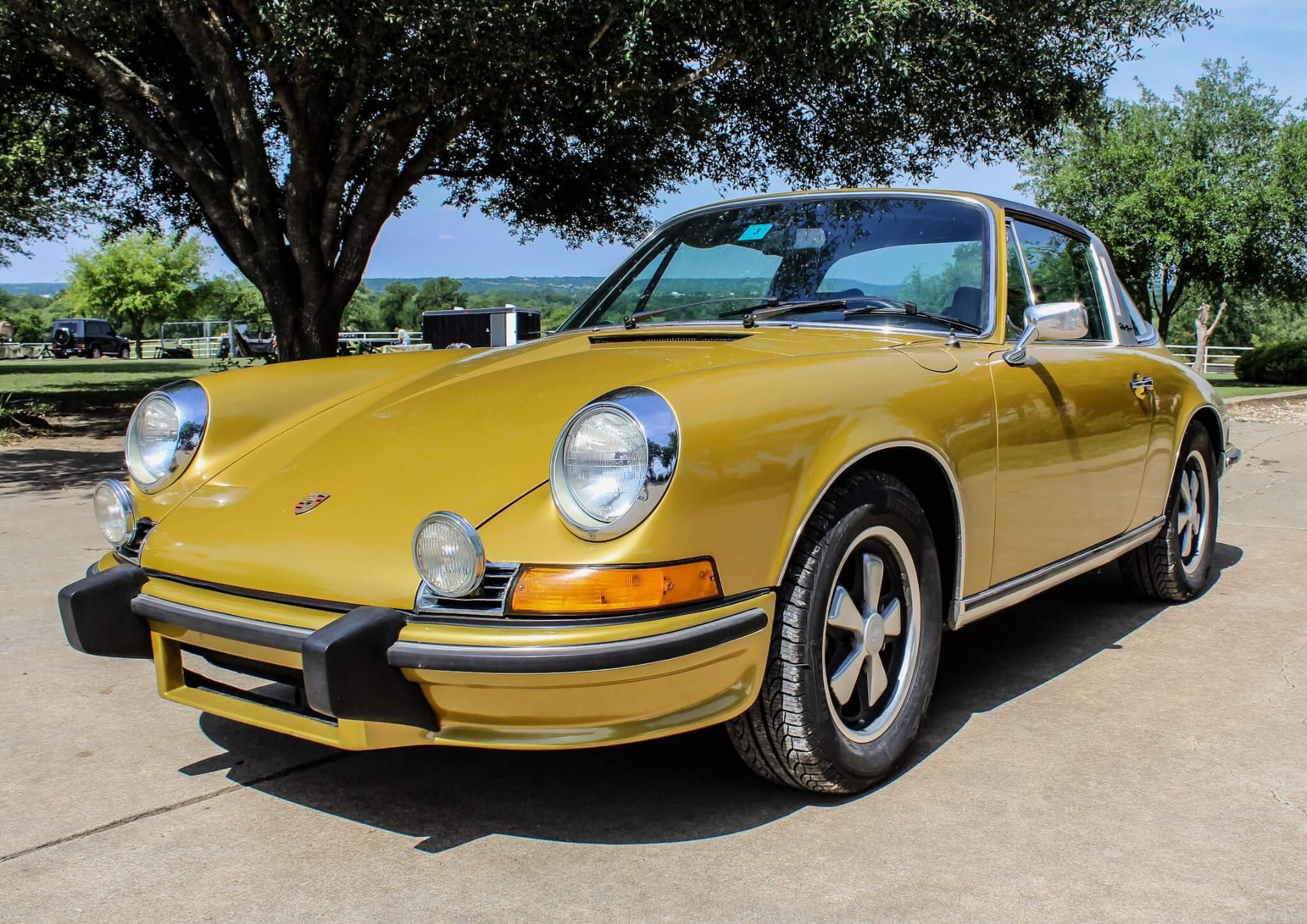 Now available for auction is this 1973 Porsche 911 T Targa Sportomatic presented in Gold Metallic over a black leatherette interior.  In 1973, the 911 T was offered in the United States as the first 911 to be equipped with Bosch CIS fuel injection.  Marking the final iteration of the long hood 911 Targa, this 1973 example is said to remain in outstanding condition for its age.  Highlighting some noteworthy recent service items including a full engine rebuild performed at a cost of over $21k, this number’s matching 911 Targa is ready to begin its journey with a new owner. 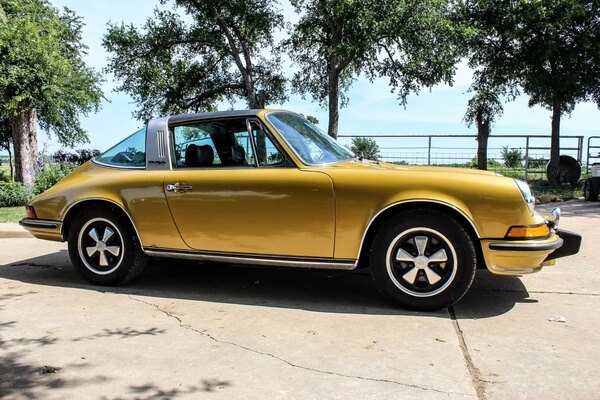 The Gold Metallic finish is said to be in very nice condition with only minor road-going wear.  A collection of detailed images is provided in the photo gallery.  This Targa is characterized by its sought-after long hood configuration, distinctive stainless-steel roll hoop and wraparound rear dome windshield.  Exterior details include an aftermarket front bumper and factory optioned chrome fender strips, fog lights and tinted glass.  This 911 rides on factory Fuchs alloy wheels which are currently dressed in Pirelli tires from 2016. 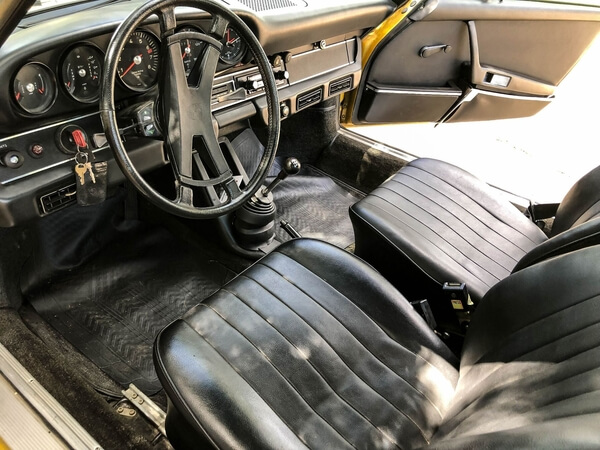 The black leatherette interior is stated to be in great shape with all gauges and accessories in working order including the air conditioning system.  Factory options include an engine compartment light, Koni shocks and stabilizer bars.  An aftermarket Pioneer head unit has been installed with rear shelf speakers. 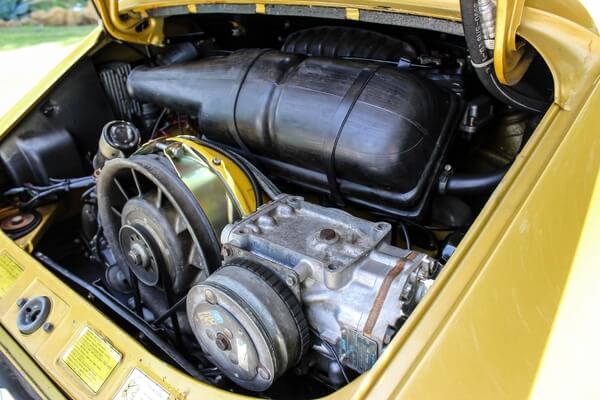 This 911 carries its original air-cooled 2.4 L flat-six engine featuring a Bosch CIS fuel injection system which was debuted in 1973 exclusively for the United States T model.  With a higher output than its European-market counterparts, this 911 T is capable of sending 140 HP to the rear wheels by way of a number’s matching 4-speed Sportomatic transmission.  Launched in 1967, the Sportomatic transmission was essentially a semi-automatic 4-speed transmission which allowed manual operation but clutch-less shifting. It proved to be popular choice with nearly a quarter of all U.S. sold 911’s equipped as Sportomatics 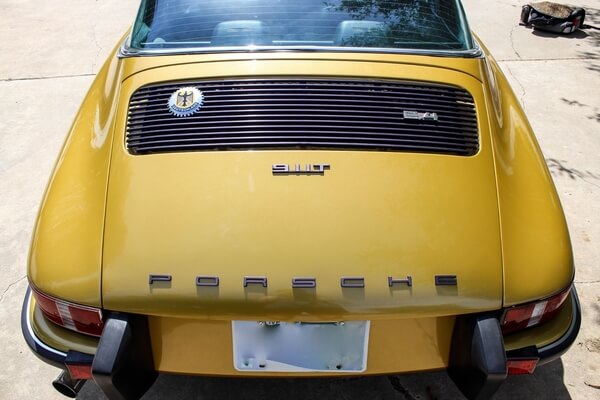 The brakes were redone within the last few years and the engine was fully rebuilt in 2018 by German Auto Center at a cost of over $21k.  A record detailing all of the work performed during this time is provided in the photo gallery.  Factory performance options include premium Koni shocks as well as front and rear stabilizer bars.  The seller indicates a slight exhaust leak and some minor grinding when shifting into second gear.  This Targa is stated to be in otherwise excellent driving condition, just waiting to be enjoyed. 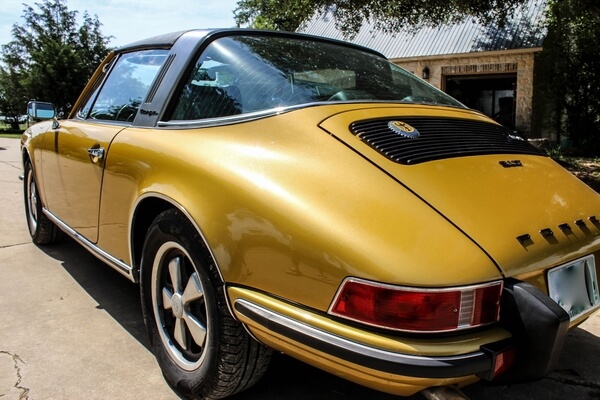 The sale of this 911 will include one master key, one lock key, the original tools and owner’s manual, service records, a spare tire and Porsche Certificate of Authenticity.  This final-year long hood Targa represents a unique opportunity for any air-cooled enthusiast.