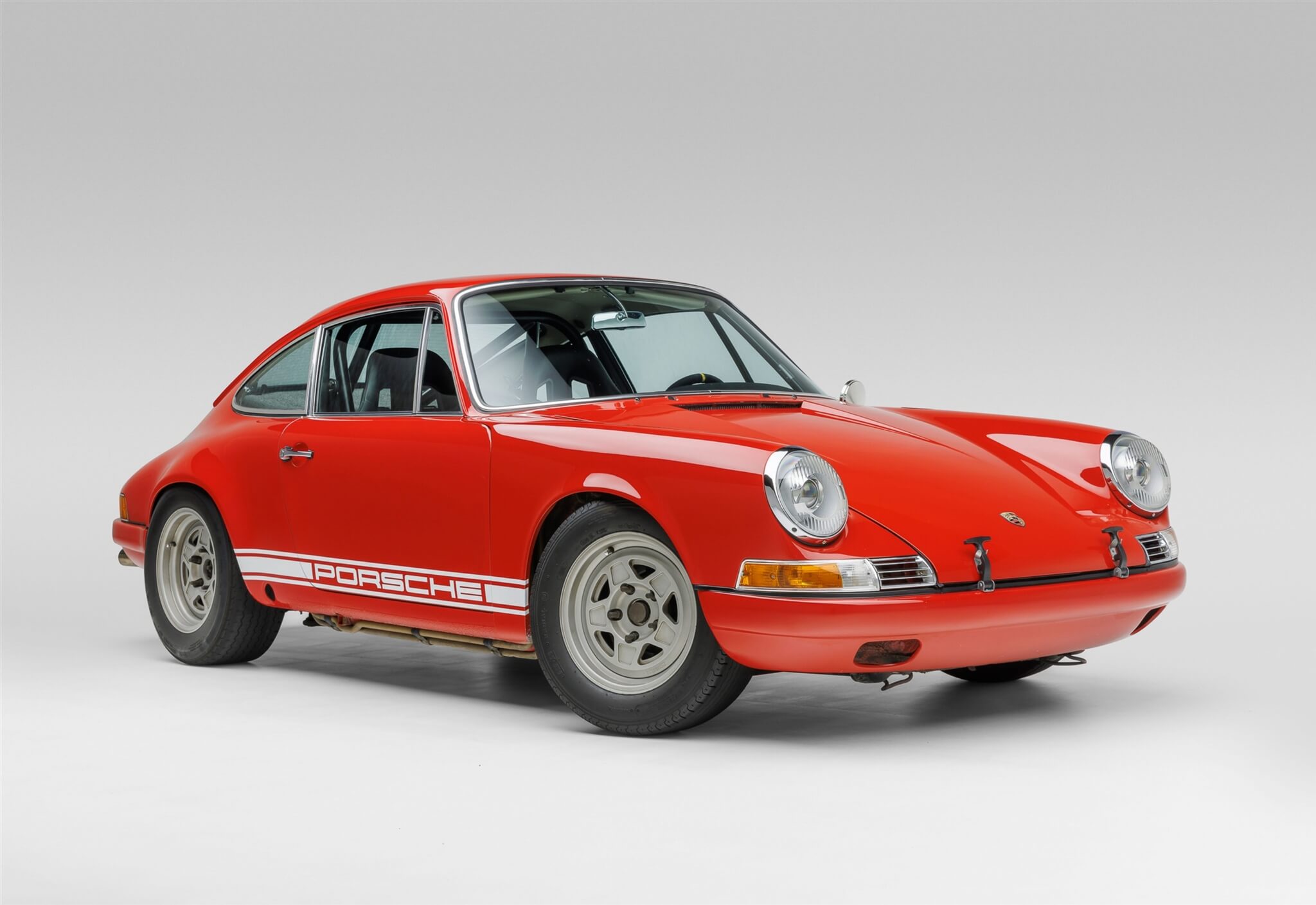 Believed to have been a lifelong California car, this 1975 Porsche 911S was acquired by the owner in 2014 as a basis for the custom backdate 911 we see today.  In addition to its classic long hood styling, this 911 received steel RS fender flares, a sunroof delete, custom one-off wheels, and a new interior featuring a bolt-in roll bar, leather bucket seats, and a digital MoTeC instrument display. As much as 300 HP is sent to the rear wheels from a custom-built 3.5L engine featuring twin-plug heads, electronic fuel injection, and a Rasant intake system. Meticulosity built using top-quality parts and upgrades, this 911S is now being offered for auction by its owner out of California. 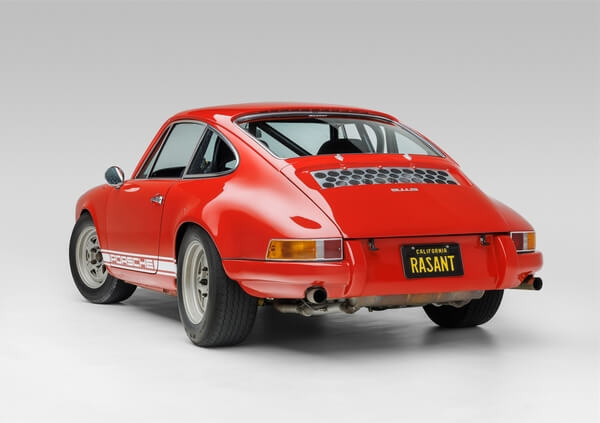 This 911S had been painted red over its original Light Yellow color at some point under prior ownership and the seller notes the front end and rear bumper were refinished in 2017 during the long hood body conversion. The car was fitted with steel RS-style Dansk fender flares, an original 1970 911 hood, Getty fiberglass bumpers, and rear bumperettes modified to match the decklid. The trunk and engine compartment were refinished in 2019 followed by the roof in 2021 during which time the factory sunroof was eliminated. Equipment includes 9Eleven Design headlights, custom billet 911R decklid hinges, a drilled engine cover, and Porsche stripe side decals. Some minor rock chips are noted on the front end from road-going use and the seller reports a faint outline on the hood from where a decal was once applied. The car rides on a set of custom-made Fifteen52 F40 forged wheels dressed in Avon CR6ZZ tires. 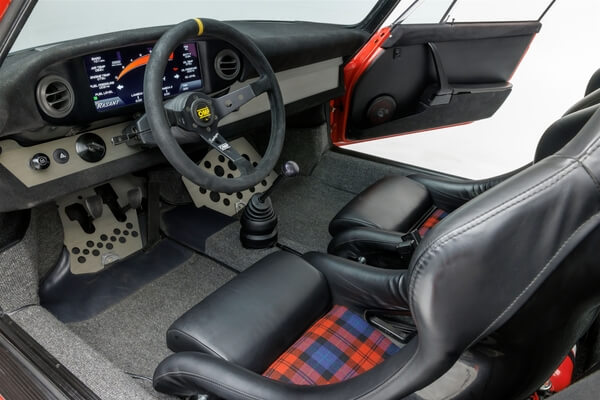 The cabin has been completely redone and lined with Dynamat insulation along with new Charcoal German square weave carpeting and Ultrasuede upholstery for the door panels and dashboard. A DAS bolt-in roll bar was added along with a pair of Classic Touring Rally GT seats in leather with tartan inserts and Schroth 6-point harnesses.  Other accessories include a concave OMP steering wheel, Rasant Products floorboards and dash pad replacement, a black anodized shift knob, Seine gate shifter, Rasant HVAV/smugglers covers, and a full customizable MoTeC M1212 digital dashboard display.  The front trunk and engine compartment have been smoothed and the pedal and shifter assemblies have been rebuilt. The electrical system has also been upgraded with a new mil-spec wiring harness. 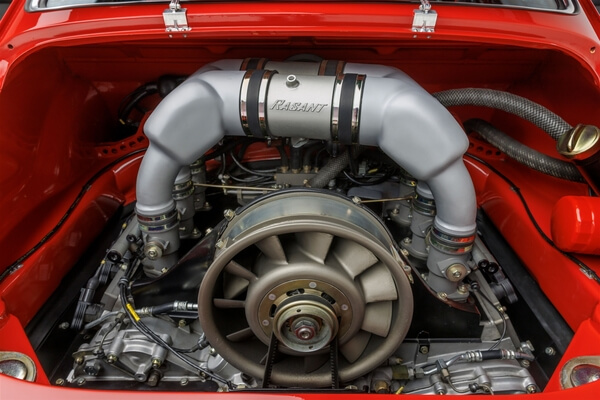 Assembled in 2016 with a top-end update in 2018, the 3.5L flat-six engine features twin coil-on-plug ignition as well as CP high-compression pistons, 100mm Mahle cylinders, Elgin high-lift cams, high-rate valve springs, and a Rasant Intake System including both trumpet-style and GT3 plenum. Other features include a 964 oil pump, billet valve covers, MoTeC M130 engine management, electronic fuel injection, a front-mount oil cooler, European race headers, and a dual exit M&K muffler. Up to 300 HP is sent to the rear wheels by way of a magnesium-case 915 5-speed manual gearbox featuring a billet side plate, one-piece bearing retainer, Wavetrac limited-slip differential, and a Sachs lightweight pressure plate and clutch assembly. A Stoptech big brake kit has been installed and the strut towers have been reinforced along with a suspension overhaul including Bilstein Sport dampers, 22mm/29mm torsion bars, Turbo tie rods, and a custom front strut brace along with all new bushings and ball joints.  The transmission was rebuilt by California Motorsports and the engine bears approximately 15k miles of use since installation. 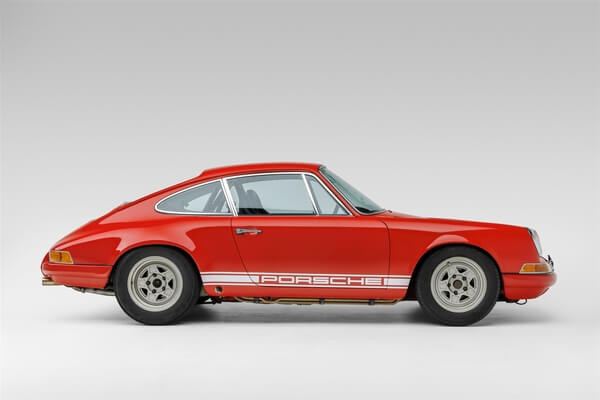 This sale will include a clean title and some build records.