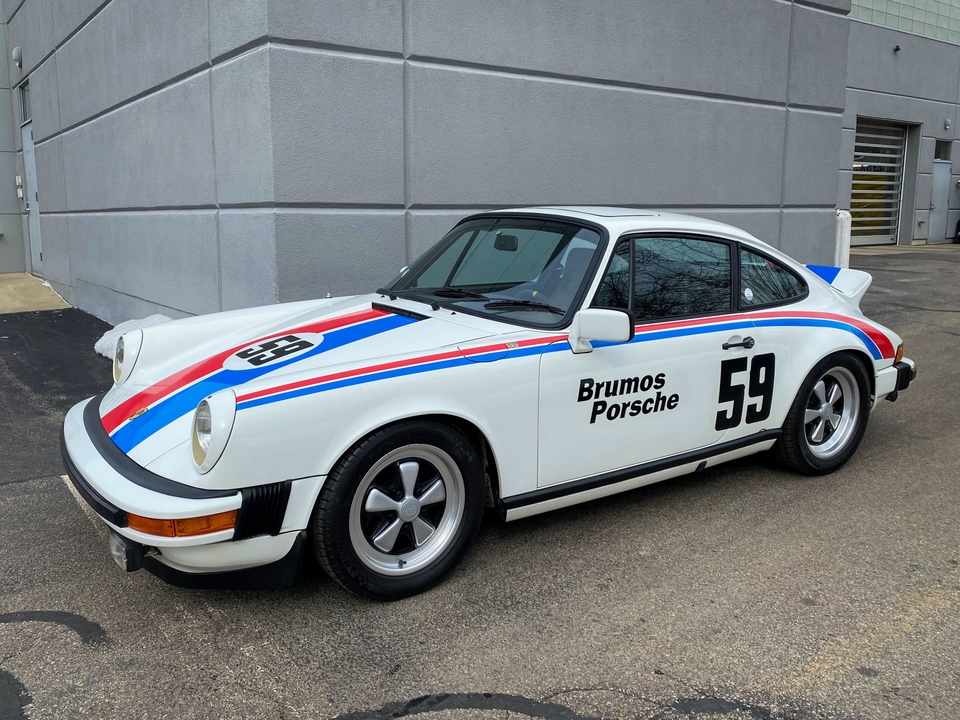 We are pleased to present this 1981 Porsche 911 SC Brumos RS tribute finished in Grand Prix White with an iconic Brumos racing livery.  Having been carefully looked after throughout its life with an extensive collection of documentation, this numbers matching SC was eventually brought to Brumos Porsche of Jacksonville, FL. Where over $70k was invested transforming this 911 into a custom RS-inspired tribute.  In addition to its exterior modifications and rebuilt drivetrain, this SC has also been upgraded with Carrera chain tensioners, 40mm PMO carburetors, an updated A/C system, and a specially tuned sport suspension.  Shown at Amelia Island 2018 at The Porsche Club of America Werks Reunion and personally signed by Brumos racing legend Hurley Haywood, this remarkable RS tribute has undergone a recent full inspection by a certified Porsche dealer and is now being offered in brilliant condition by its seller out of New Hampshire, complete with extensive records, original books, tools, and a Porsche Certificate of Authenticity. 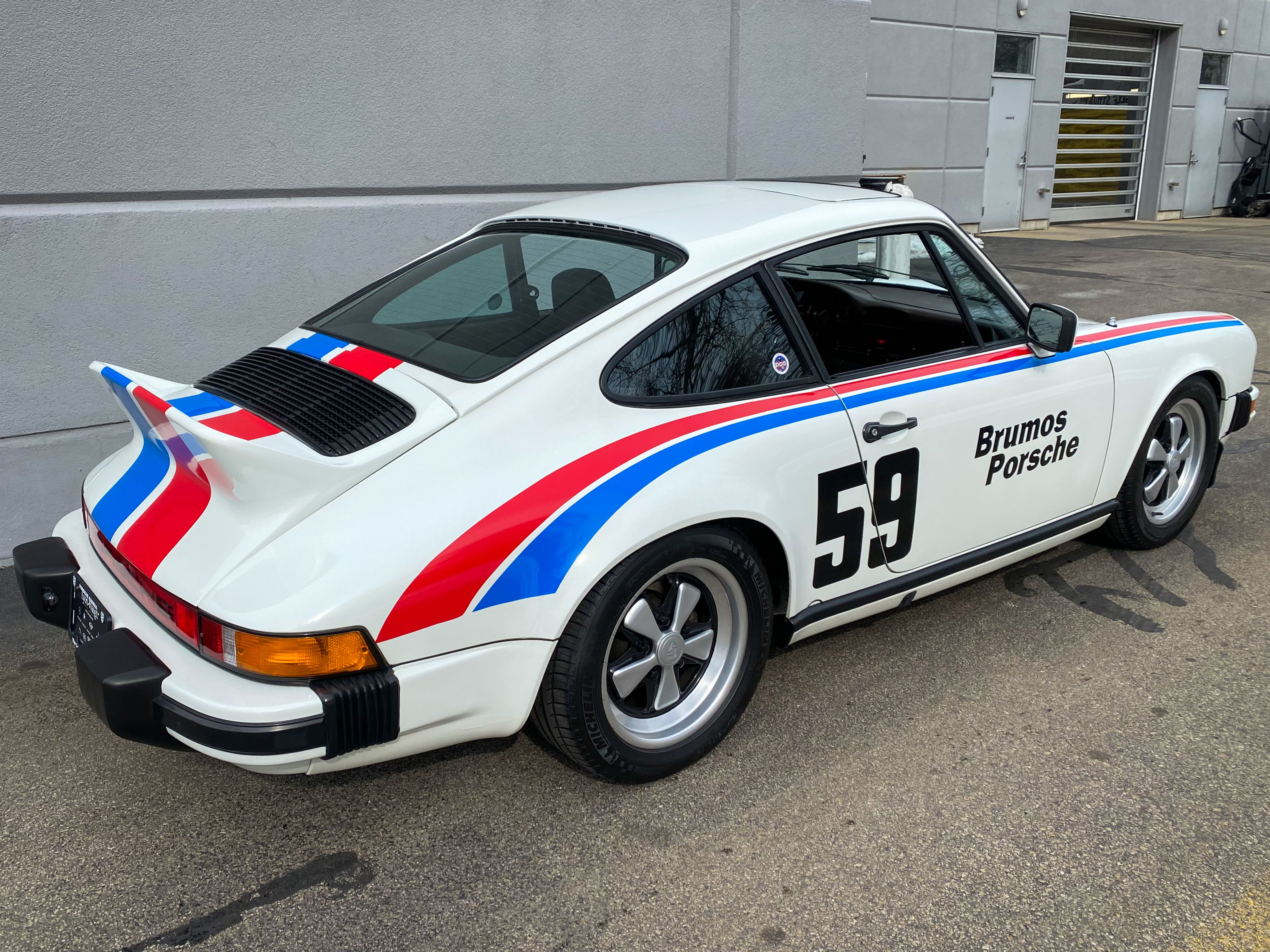 This 911SC was previously refinished in its original Grand Prix White color before receiving genuine Brumos RS vinyl graphics.  An authentic ducktail rear spoiler was also installed at Brumos and the graphics are said to be easily removable. The paint is described to be in great overall condition except for a few small touched-up imperfections (detailed images are provided in the photo gallery).  The factory sunroof and tinted glass have been retained and this SC currently rides on a set of genuine 16” Fuchs wheels that have been refinished and dressed in a set of newer Michelin tires. 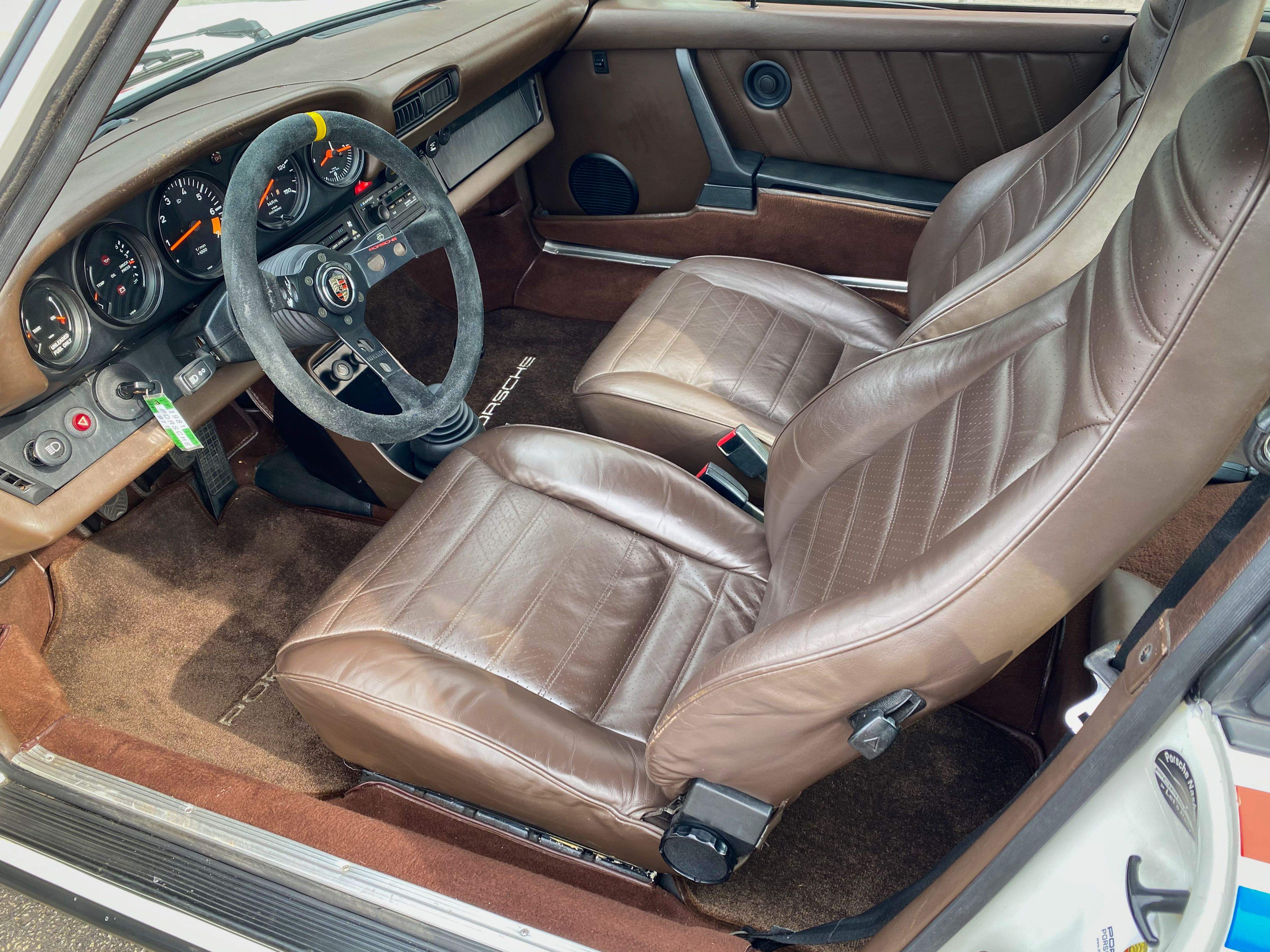 Inside, you will find a factory dark brown leather interior with a MOMO 3-spoke steering wheel.  The original radio, speakers, gauges, and antenna are said to be fully functional and the A/C system reportedly underwent a comprehensive update for added convenience.  New Lloyd’s floor mats have been installed and the interior is reported to be in very nice condition with normal signs of wear.  A personal signature from racing legend Hurley Haywood can also be found underneath the front bonnet. 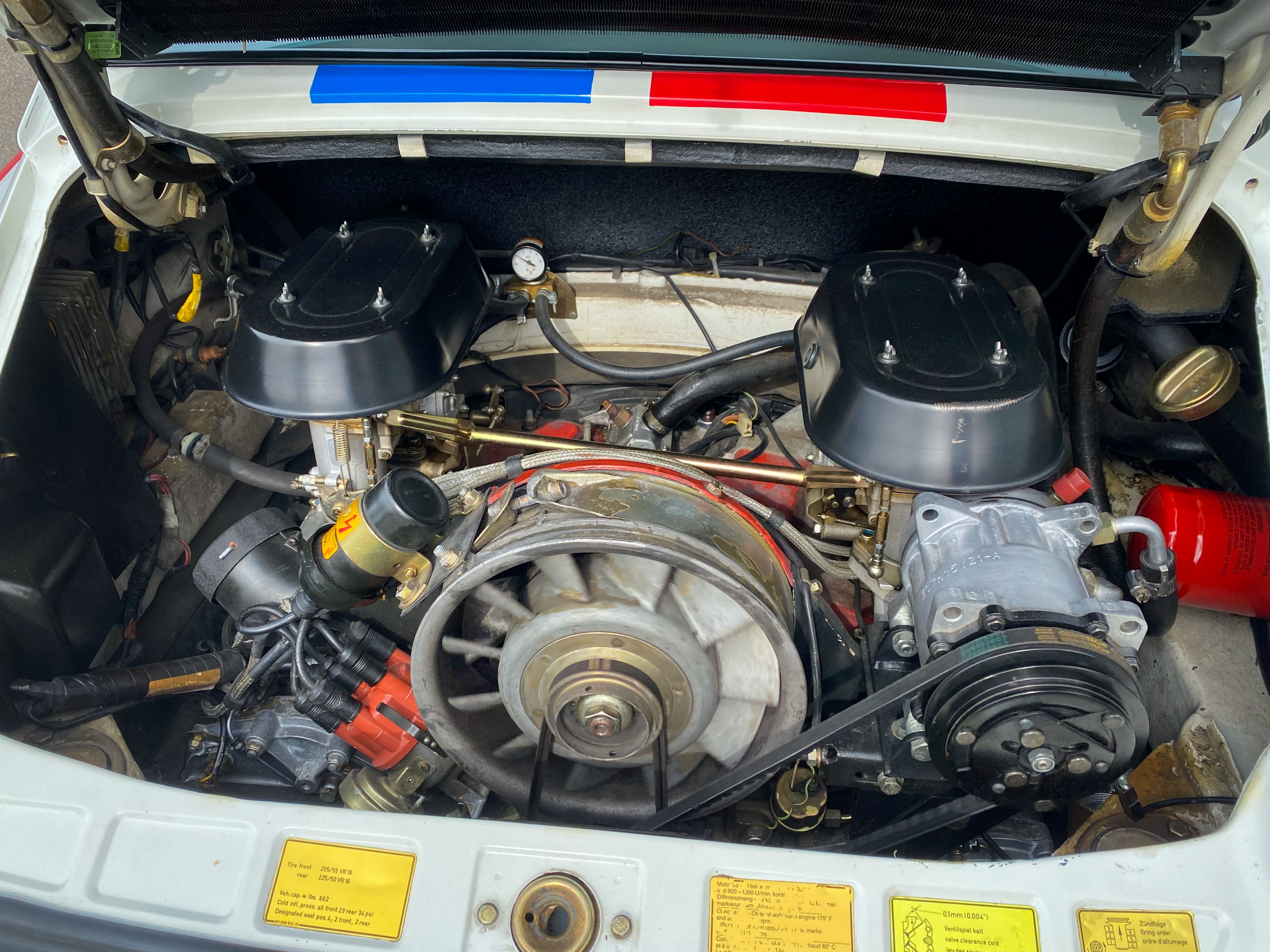 During its time at Brumos in 2014, the original air-cooled 3.0 L flat-six engine underwent a comprehensive rebuild using OEM parts as well as upgrades including oil-fed Carrera chain tensioners and 40mm PMO carburetors.  The 5-speed manual gearbox was also fully rebuilt to factory specifications and paired with a new clutch.  Other work carried out at Brumos included new braking components and the installation of a specially tuned sport suspension lowered to RoW ride height.  Approximately 2,400 miles are said to have been driven since the completion of the work and this 911 underwent a recent comprehensive service and inspection at a Porsche dealership that found the car to be in fantastic mechanical order. 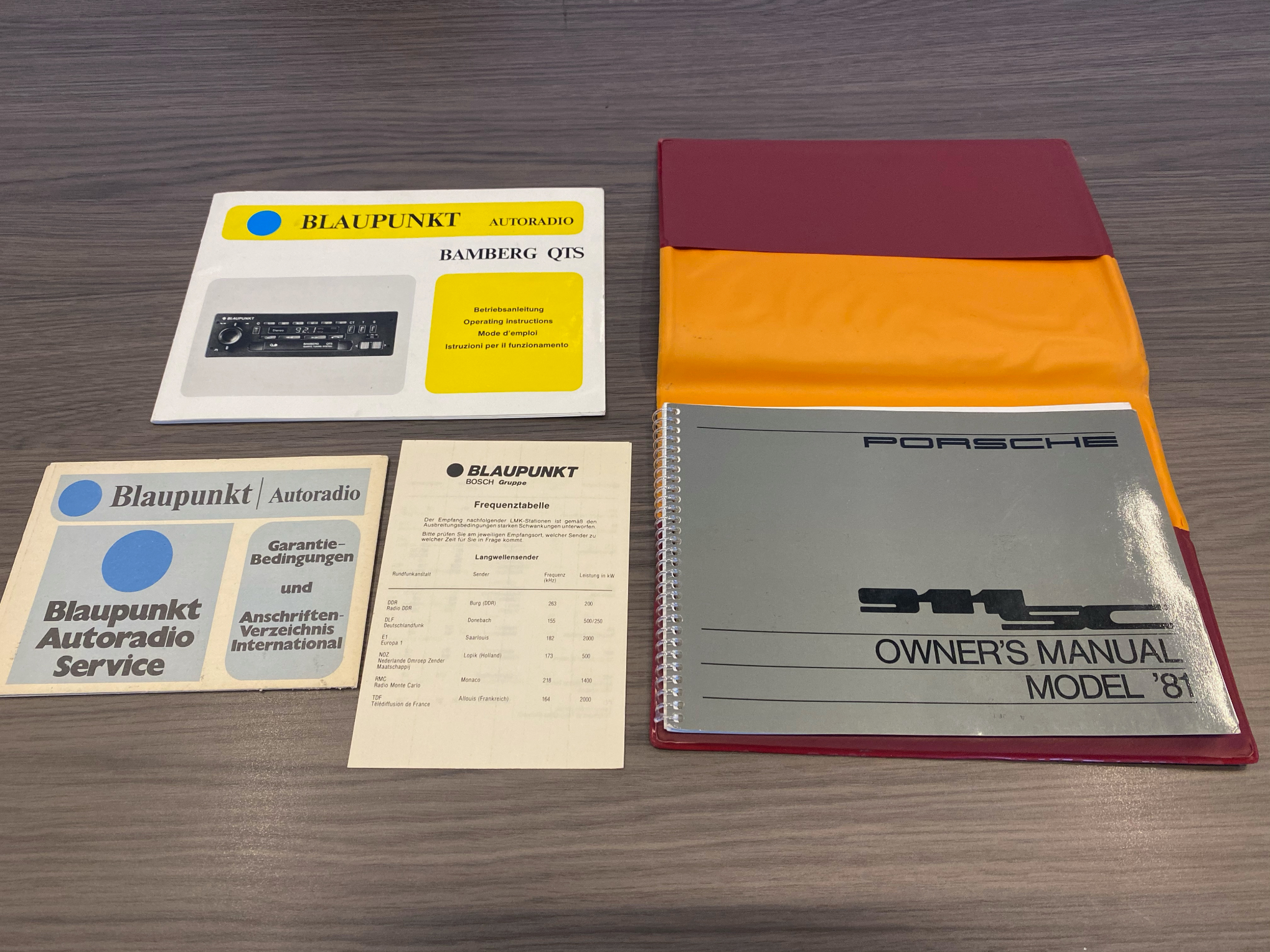 This sale will include the original sets of keys, owner’s books, tools, an air pump, spare tire, Brumos key fob, Porsche COA, and a clean title.  This is a very special opportunity to own one of the last custom Porsches built by Brumos before their closing, do not miss out.