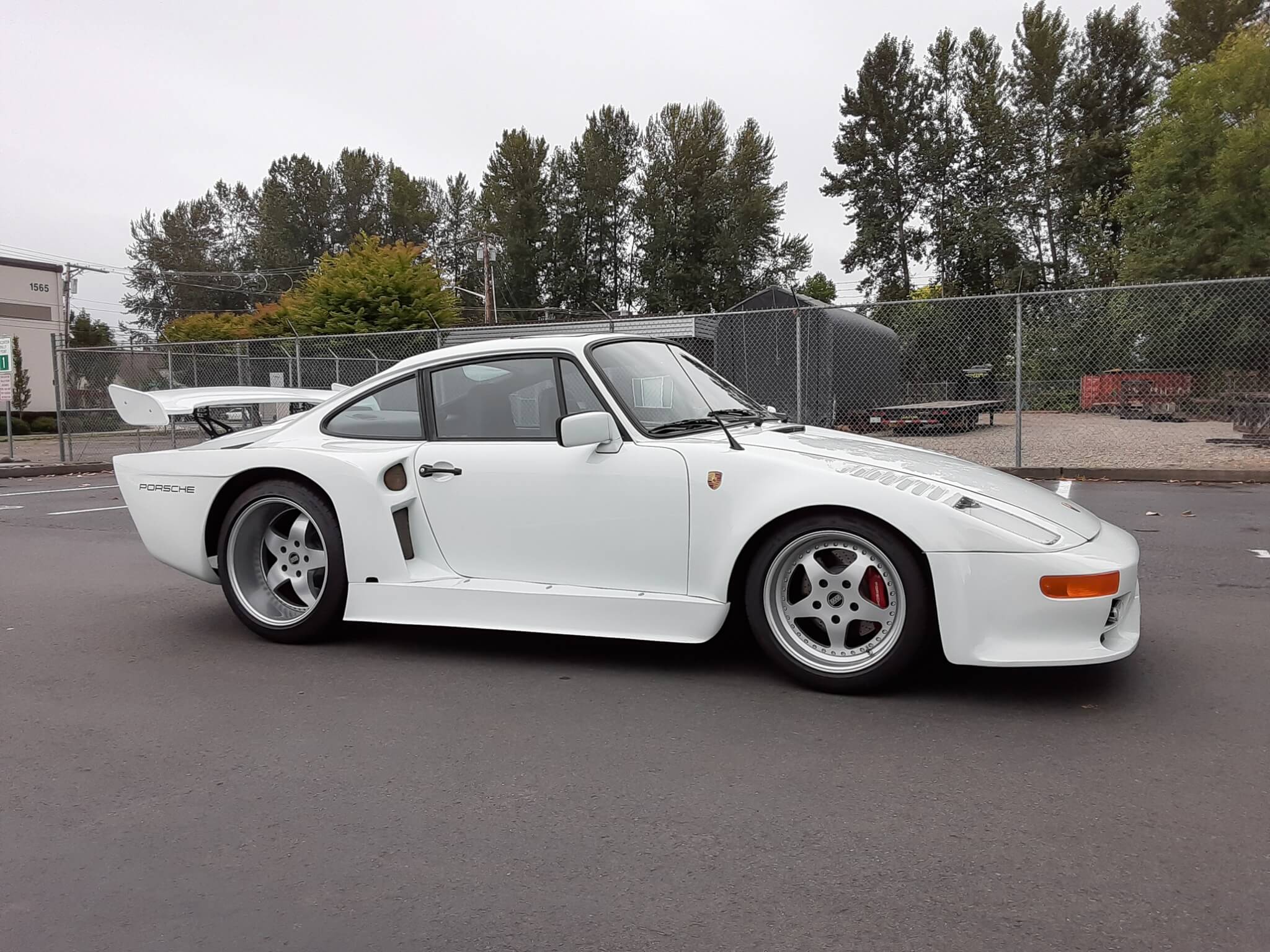 Beginning life as a standard Porsche 911SC Coupe, this 1981 example had reportedly been driven by Holly Hunter’s character on the television series Saving Grace from 2007 to 2009 after which it was acquired by the current owner as the basis for a custom 935 K3-inspired build.  The car was outfitted with 935 body panels as well as modified steel Slant Nose fenders, upgraded suspension, larger brakes, and a new 5.7L LS1 V8 engine producing over 400 HP.  Remaining street legal and accompanied by extensive records documenting the build process, this 935-inspired 911SC custom is now being offered for auction by its owner out of Washington. 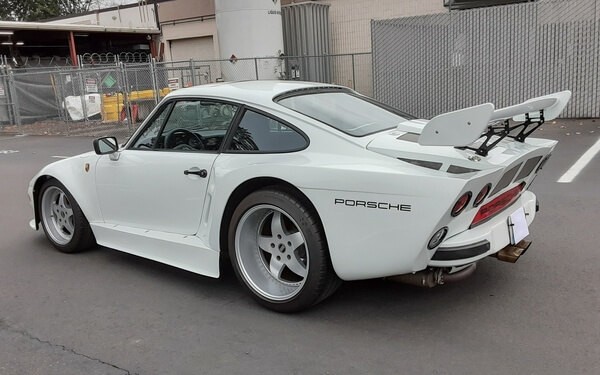 Upon the seller’s acquisition, the car was fully disassembled and outfitted with Porsche 935 K3 rear quarter and rocker panels manufactured by American International Racing in Los Angeles on authentic vintage molds.  The rockers and quarter panels were narrowed to match and feature quick-release fasteners as well as flush-mounted taillights. The steel 930 Slant Nose front fenders were widened and modified for fixed H4 headlights by Jrod and Custom in Auburn, WA. The front fascia uses the top half of a Porsche 993 Turbo front bumper bonded to a Porsche 930 S front spoiler with integrated driving lights.  An adjustable wing is mounted to the rear decklid as well as locking hood pins. At a cost totaling over $60k, the custom bodywork was finished off by Raley’s Auto Body in Puyallup, WA, including a bright White exterior finish with Porsche lettering beneath the clearcoat.  The car rides on a set of custom Braid three-piece wheels measuring 8.5”x17” in front and 11”x19” in rear, dressed in Michelin Pilot Super Sport tires. 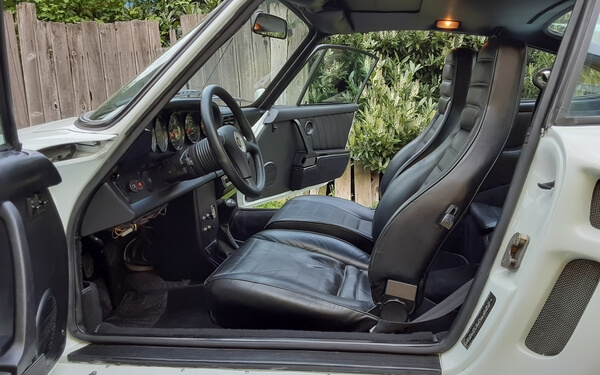 The black leather interior has been fitted with a 993 RS-style steering wheel, new German silver knit carpeting, and a Porsche 930 S enter console with a VDO voltage gauge. The speedometer was rebuilt and adjusted for wheel size by North Hollywood Speedometer along with a rebuilt clock. Other additions include an aftermarket under-dash A/C system, a two-way remote alarm system, and a new Alpine radio. 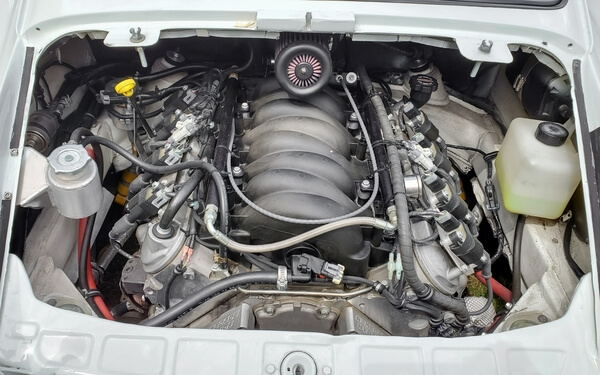 The all-aluminum 5.7L LS1 V8 engine was built new by Turnkey Engine Supply of Oceanside, CA, and produces a claimed output of up to 410 HP and 400 lb.-ft of torque. The engine has a 6,600 RPM redline and is paired with a Rinda Technology marine-grade wiring harness and GM Delfi MEFI-4 ECU. Other features include an aluminum fuel tank, aluminum radiator, new throttle linkage, and custom mandrel-bent stainless-steel exhaust with Magnaflow mufflers and catalysts. Power is sent to the rear wheels through a rebuilt Porsche 915 5-speed manual transmission with new synchros, a higher 5th gear, Porsche short shifter, and a Kevlar clutch.  The suspension has been completely overhauled with Elephant Racing bushings, ball joints, Bilstein HD struts, Bilstein Sport shocks, Elephant Racing torsion bars, quick-change spring plates, and new CV axles. Upgrades to the braking system include rebuilt 993 front calipers, a 930 Turbo master cylinder, and rebuilt 930 Turbo rear calipers with new rotors all around.  The build was completed in July of 2017 and the car has been driven approximately 11k miles since while never seeing track use. 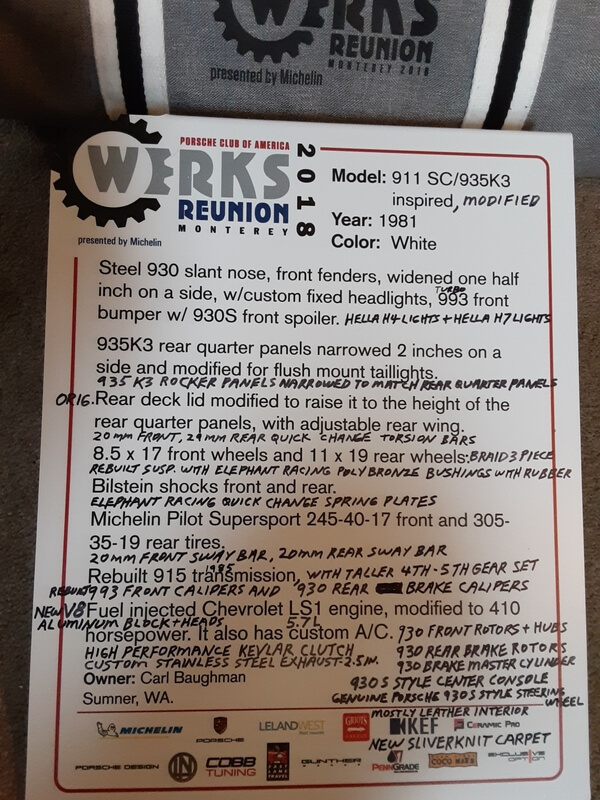 This sale will include a clean title and build documentation.