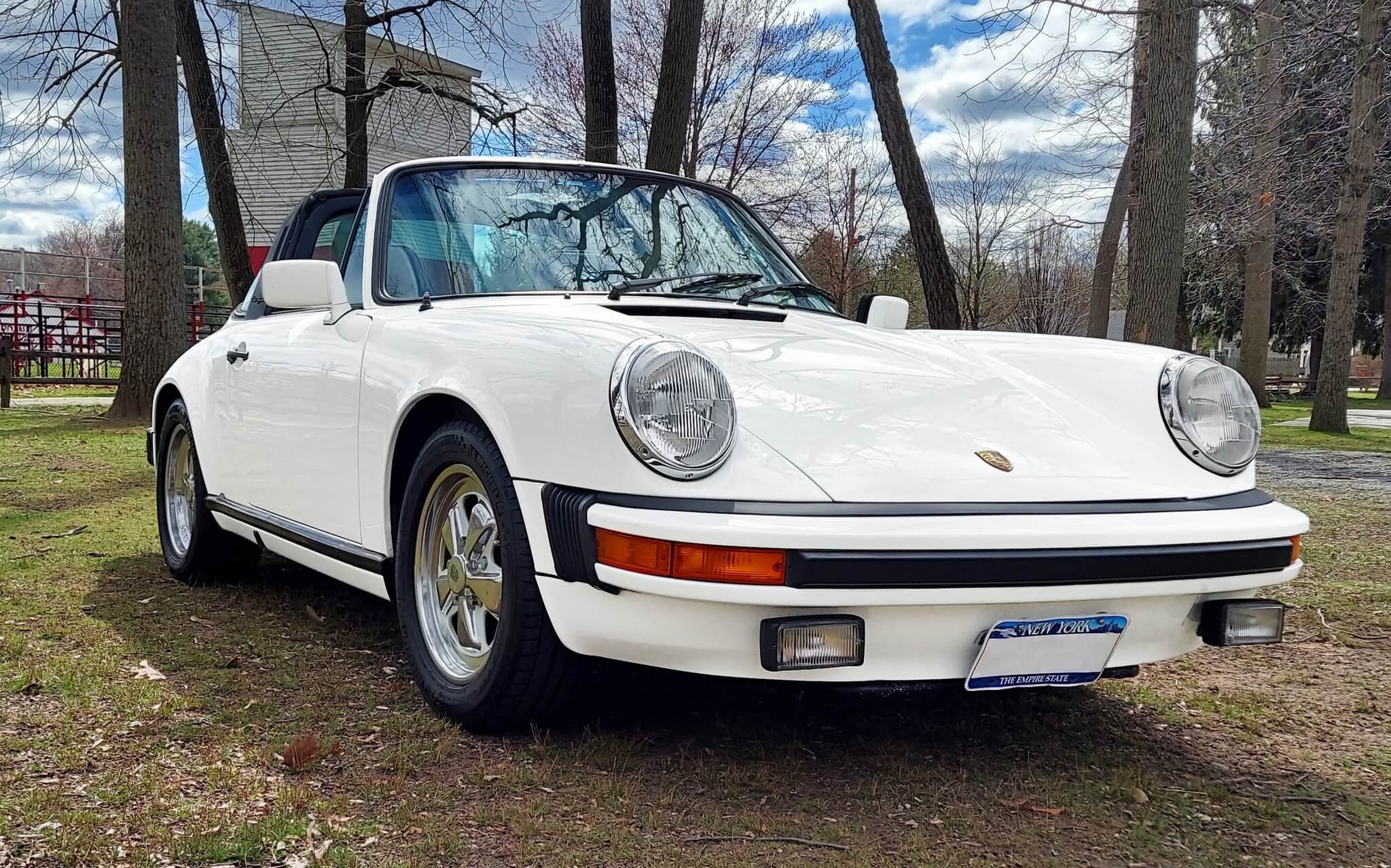 Originally a California car, this 1981 Porsche 911SC Targa underwent a restoration and modification process from 2010 to 2013 in a few phases, completed by the Porsche specialists at Formula Motorsports of Long Island City, New York. Details included a repaint in its original color of Grand Prix White, a reupholstered custom interior with Sport Seats and RS-style door panels, an upgraded air conditioning system, a rebuild and reseal of the 3.0L flat-six engine with new PMO carburetors, an upgraded oil cooler, and a free-flowing exhaust system, new high tension torsion bars and Bilstein dampers for the suspension, as well as a regearing of the 5-speed manual transaxle and the fitment of a limited-slip differential.  The most recent work performed includes an engine-out service  to repair the gearbox, replacement of the starter, spark plugs, one tire and battery. Additionally, a valve adjustment was performed along with the cleaning out of the carburetors, repair of the fan housing, a rebuild of the odometer and charging of the air conditioning system. The seller has traveled 18k miles since completion of the restoration and the car is now showing approximately 121k miles on the odometer. This 911SC Targa is now being offered for auction at no reserve by the seller based out of New York, accompanied by a binder full of records and receipts detailing the components of the build, which reportedly had a total cost of over $183k. 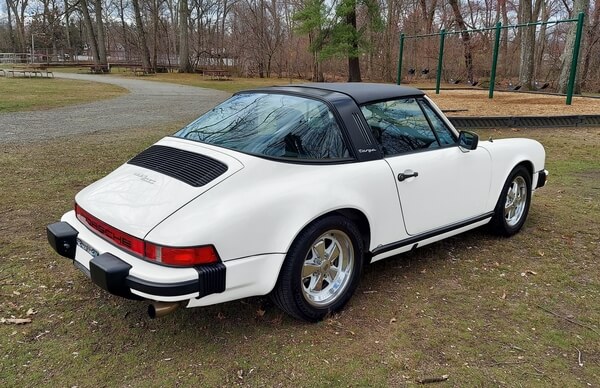 The exterior was repainted in the original finish of Grand Prix White (908) close to the beginning of the restoration in early 2011. During this period, chrome headlight bezels were fitted, the Targa badges were painted silver, and the factory 16” Fuchs wheels were refinished in chrome with matching white accents, which are mounted with Michelin Pilot Exalto PE2 tires displaying date codes from 2018. The seller reports the front bumper and leading edge of the hood have received the application of paint protection film, and notes some imperfections including some paint chips on the front lower valance near the fog lights, one chip on the hood, a small curb mark on the driver’s side front wheel and a few scuff marks on the door panels and dash lip. Detailed images are provided in the gallery along with a clean CARFAX report. 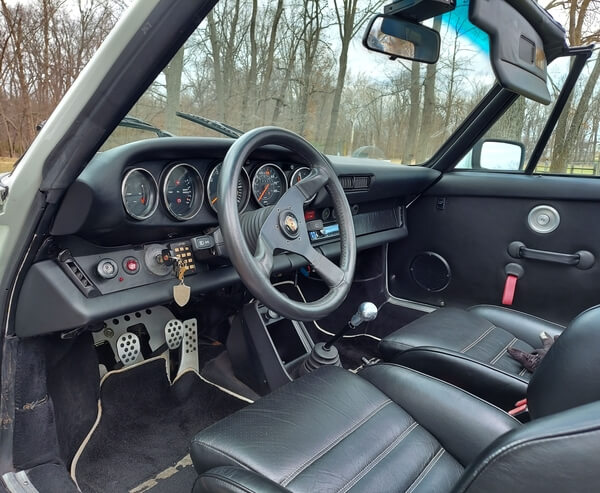 The cabin has been reupholstered using high-quality black leather with white contrast stitching throughout, which covers the dashboard, center console, RS-style door panels with red fabric pulls, the OEM Sonderwusch Porsche Turbo Sport Seats, and rear seats. Details include a three-spoke MOMO steering wheel with a Porsche horn button, metal gauge bezel rings, custom 911SC carpeting with white emblems and white piping, a fire extinguisher mounted to the rear floor, aluminum floorboards, an aluminum pedal kit, and an aluminum shift knob. An Alpine stereo head unit has been installed, along with upgraded Focal speakers and a subwoofer mounted beneath the driver’s seat, and a hardwired connection for a radar detector was installed around the windshield. The Targa top mechanism was also completely rebuilt, and new seals were installed. The seller also notes the dashboard was rewired, and extra soundproofing was added throughout the interior. 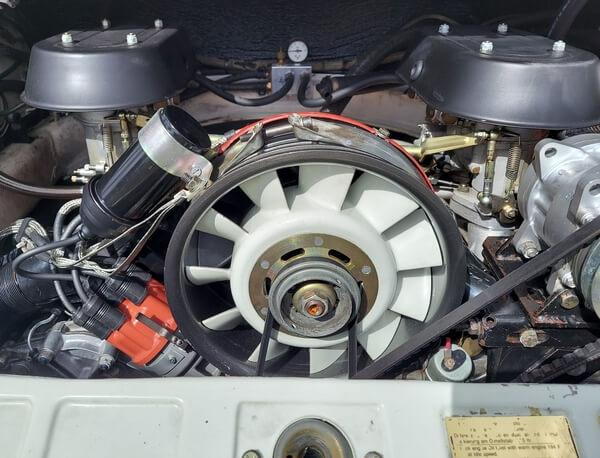 This 911SC is powered by the original air-cooled 3.0L flat-six, which has been rebuilt and fitted with PMO carburetors, an upgraded oil cooler, and an aftermarket free-flow exhaust system. The seller notes that most of the car’s components and mechanical parts were replaced by Porsche OEM. The rear wheels are driven by a 5-speed manual gearbox with a short-shift kit. The transmission was also rebuilt with shorter gears and a limited-slip differential. The suspension has received stiffer torsion bars and Bilstein shock absorbers. Recent services totaling $14k include an engine-out to repair the transmission fork, cleaning and adjustment of the carburetors, refurbishing of the fan housing, rebuilding of the odometer, and charging of the A/C system. Also the starter, spark plugs, driver-side front tire and battery were recently replaced. 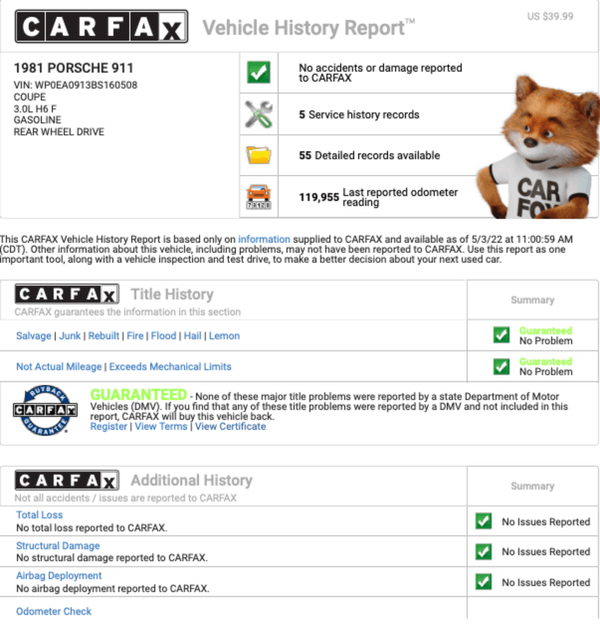 This sale will include a clean title and will be accompanied by a binder full of service records and receipts detailing the restoration and regular maintenance.