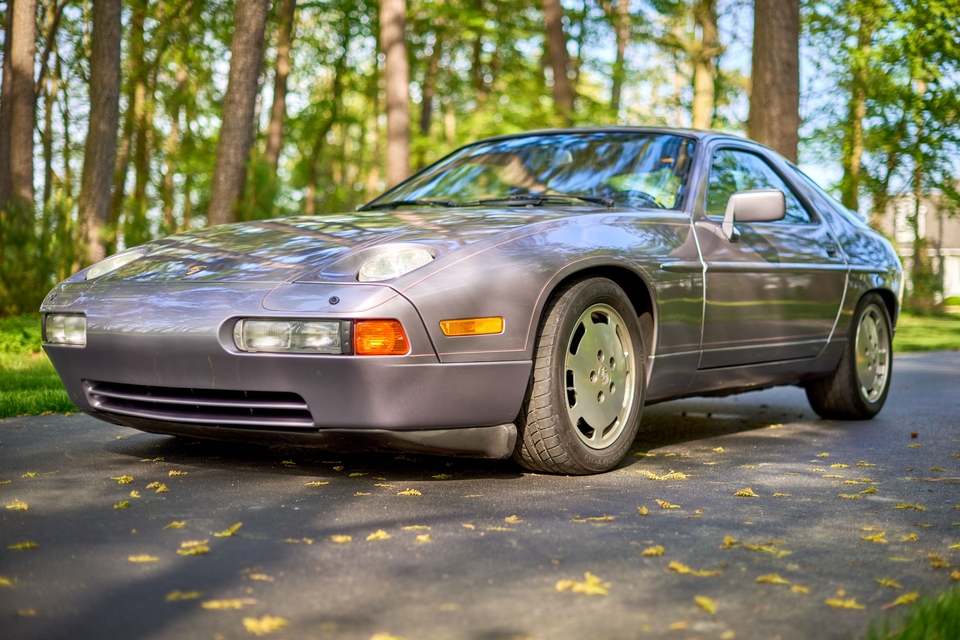 Up for auction is this 1987 Porsche 928 S4 finished in Diamond Blue Metallic over a black and tan leather interior.  Signifying a major evolution for the 928 model, the S4 was debuted in 1987 with revised styling, improved brakes, and upgraded engine internals which helped the 5.0L V8 produce up to 320 HP.  Purchased by the seller earlier in 2020, this inaugural model year 1987 example has traveled approximately 400 miles since and has undergone extensive recent maintenance including the replacements of the timing belt, water pump, front brakes, and much more.  A luxurious and powerful grand tourer, this 928 S4 is now being offered for auction by its seller out of Maryland accompanied by original books, tools, and a branded title (TMU).

This 928 is finished in Diamond Blue Metallic and the seller notes the car to have been kept in climate-controlled storage under their ownership.  Some minor cosmetic imperfections are depicted in the photo gallery along with a damage-free CARFAX report.  The 928 S4 distinguishes itself from its predecessors with aerodynamically improved bumpers and a rear spoiler.  This example retains factory 16” Manhole Cover wheels and the seller reports that four brand new tires will be installed prior to sale along with a fresh wheel alignment.

Inside this 928, you will find a well-kept black and tan leather interior with power-operated front seats.  A set of black floor mats with red Porsche lettering has been added along with an aftermarket Alpine radio.  All gauges and accessories are said to be fully functional including the A/C system, which was recently serviced and resealed in 2020.  The odometer gear is said to have failed during previous ownership and was recently relpaced by the seller.  It currently reads approximately 20k-miles, and the seller reports the true mileage to be within 1k miles of this figure.

Under the hood is a 5.0L V8 DOHC engine that sends as much as 320 HP to the rear wheels by way of a 4-speed automatic transaxle. Since purchasing the car earlier in 2020, the seller reports that the following items have been replaced:

This sale will include the original owner’s manuals, toolkit, spare tire, a collection of recent maintenance records, and a branded title (TMU).  Offering more power and refinement than its predecessors, the S4 is often referred to as the “sweet spot” in the 928 lineup, do not miss your chance to own this thoroughly serviced 1987 example.