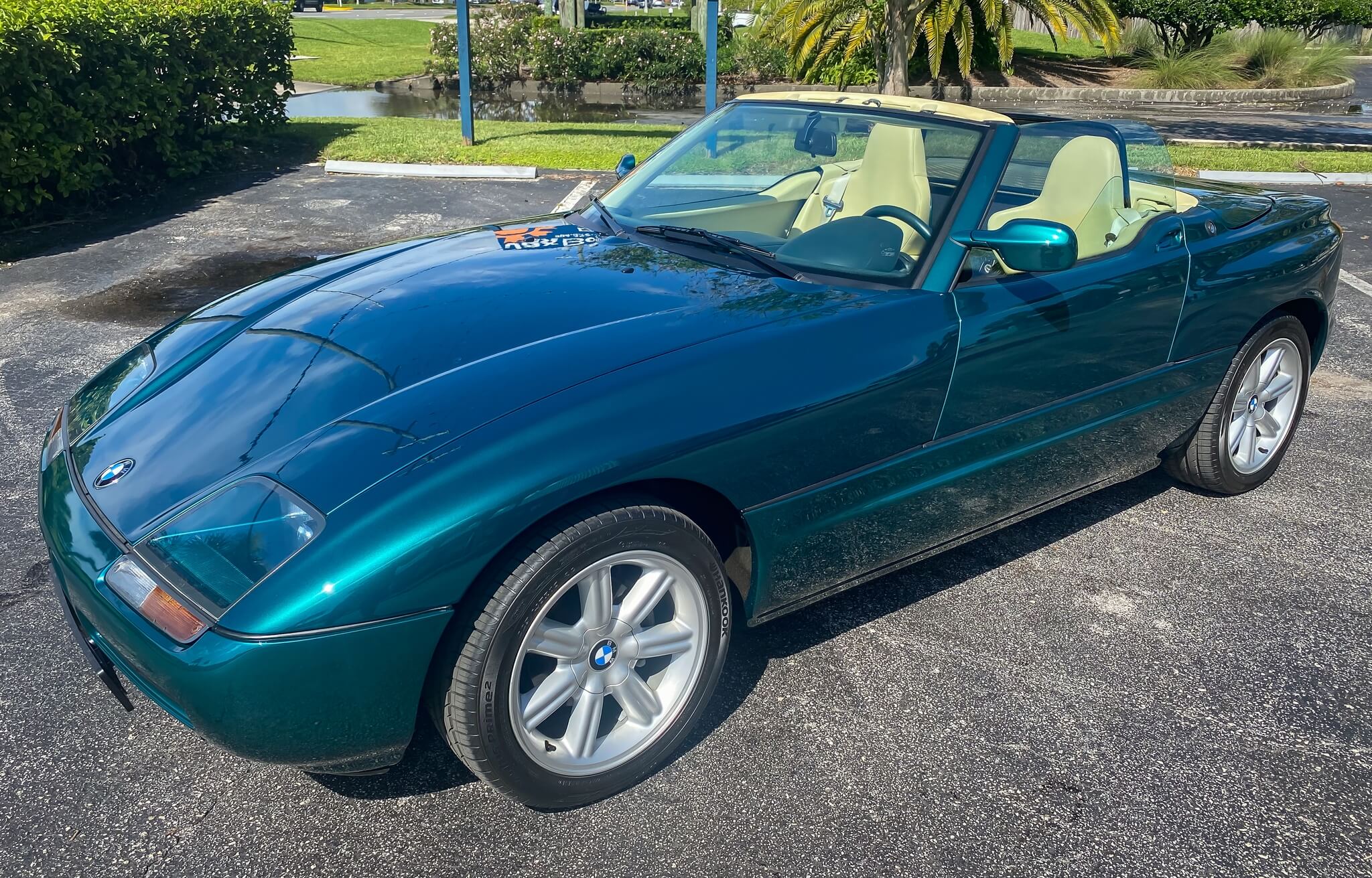 We are pleased to offer this 1989 BMW Z1 Roadster finished in Urgruen Metallic over a Lemon leather and Biscuit cloth interior. Introduced in 1989, the Z1 was designed by BMW’s new Technik division which was formed to explore new ideas in engineering, development, and manufacturing of small-volume cars. Designated as a “Z” model for Zukunft, German for “future”, the Z1 was the first-ever BMW to wear the Z badge. The body was clad in advanced interchangeable plastic composite panels and featured unique doors that rolled down into the sills of the chassis. Never offered in North America, only 8,000 Z1s were ever produced with most of them delivered in Germany.  Acquired directly from Europe and recently imported by the seller, this Z1 is now being offered for auction with just over 15k kilometers (9k miles) showing on the odometer. 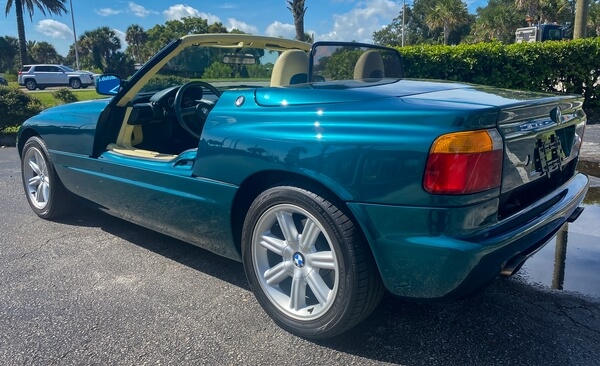 This Z1 came finished in Urgruen Metallic (271) and is said to have been professionally detailed and stored in a climate-controlled facility since the seller’s recent acquisition.  The finish exhibits some minor signs of age and road-going wear,  detailed images are provided in the photo gallery.  Designed by Harm Lagaay, who was also responsible for the Porsche Boxster, Cayenne, 996, and Carrera GT, the Z1’s futuristic design was based on BMW’s popular E30 chassis. The most notable design element of the Z1 are its doors, which retract into the body of the vehicle via electric motors and toothed belts engaged by pushing in the keyholes located behind each door. The Z1 was also designed as a modular vehicle with body panels manufactured from a thermoplastic composite that could be removed from the galvanized pressed steel chassis and replaced using just a screwdriver. Each Z1 was painted in a special flexible lacquer finish jointly developed by AKZO Coatings and BMW Technik, and would not crack if the panels were flexed. At its launch, BMW suggested that Z1 owners purchase an additional set of body panels and change the color from time to time. Aerodynamics were also a key focus of the Z1’s design, evident in the smooth plastic undertray that runs beneath the car to the rear bumper. This 1989 example retains its factory 15” BMW Style 10 wheels which come dressed in Hankook Ventus Prime² tires. 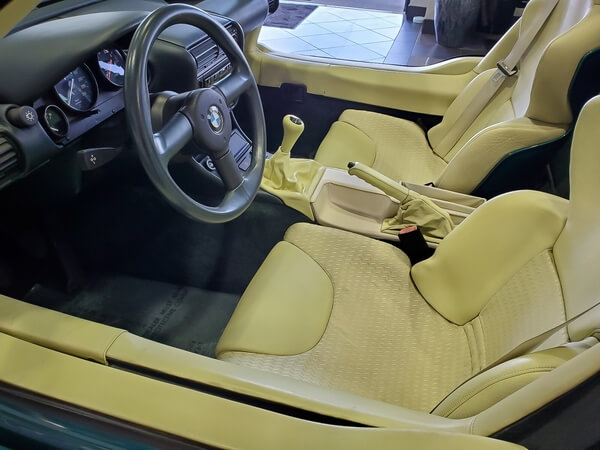 The interior of the Z1 features an exterior color-matched dashboard and carpeting along with deeply bolstered Recaro sport seats upholstered in a combination of Lemon leather and Biscuit patterned cloth, with body color-matching seatbacks. Lemon leather also covers the door sills, center console, shifter knob, shift boot, and parking brake. A color-matched leather-wrapped three-spoke steering wheel sits ahead of black instrumentation including a 150-MPH speedometer, a 7k RPM tachometer, and additional gauges for fuel level and coolant temperature. The seller confirms all gauges and accessories to be working properly including the original Becker Traffic Pro radio. 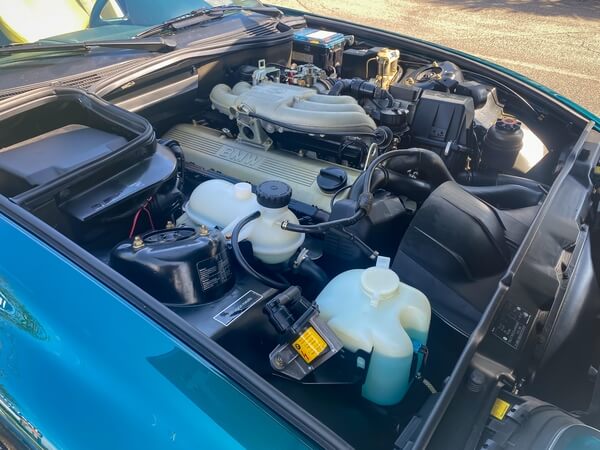 The Z1 is powered by a 2.5L inline six-cylinder M20B25 engine sourced from the BMW E30 325i, which made up to 170 HP and 164 lb.-ft of torque when new. The engine sits tilted 20 degrees to the right to accommodate the low hood line. Power is delivered to the rear wheels through a 5-speed Getrag 250 manual gearbox. The front MacPherson strut suspension was also derived from the E30, although the rear featured a unique “Z-Axle” multi-link arrangement that would go on to be used in future BMW models including the E36 3-series and Z3. Recent service items are said to include an oil change and a new battery. 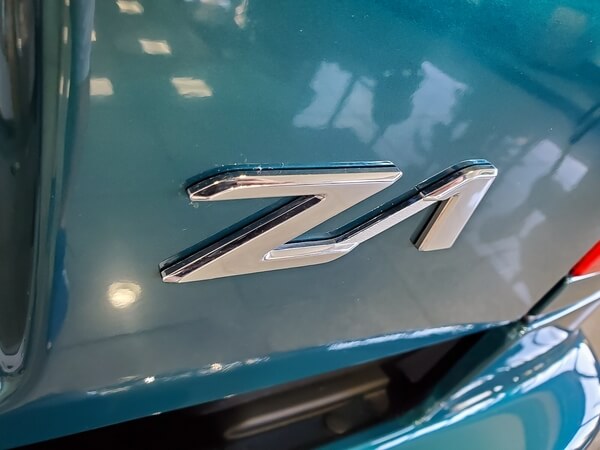 This sale will include a spare tire and a clean title. Seldom seen on North American roads, this rare BMW Z1 makes a fine collector’s item and an excellent choice for top-down cruising and car shows.