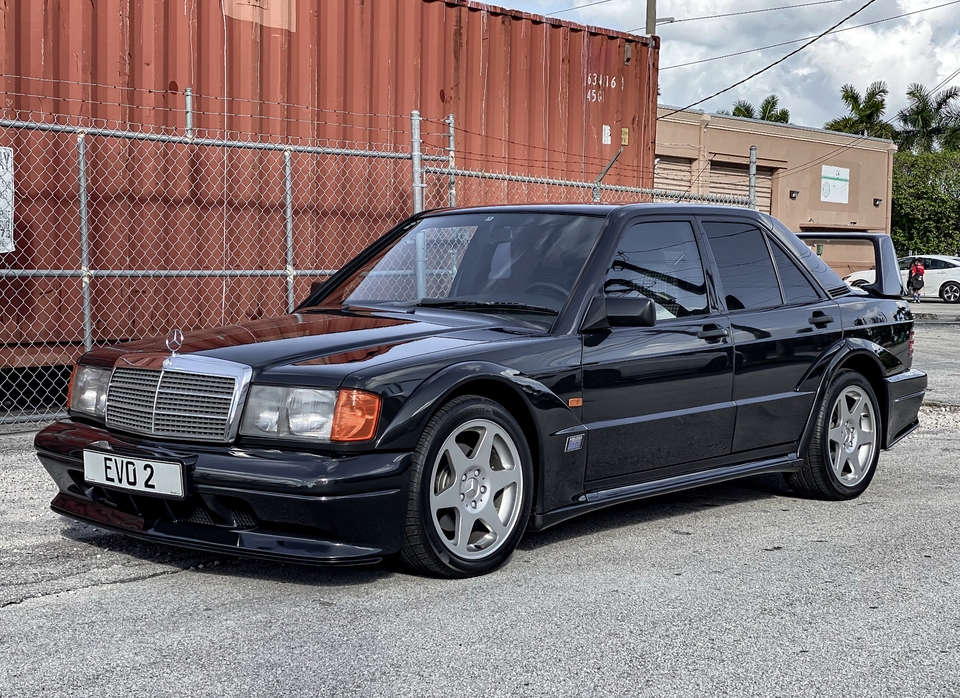 We are pleased to offer this highly sought after 1990 Mercedes-Benz W201 190E 2.5-16 Evolution II.  Following the success of the original 190E Evolution built in compliance with DTM homologation rules, the Evo II was produced in a limited run of 502 examples between 1990 and 1991 to allow Mercedes’s ongoing efforts in DTM racing.  Representing the 357th example built in the series, this Evo II was delivered new from Germany directly to a customer in Japan, where it resided up until 2015. Its Japanese owner carefully maintained this very special high-performance Mercedes-Benz and kept service records that still accompany the car. A Canadian collector eventually acquired this Evo II in 2015 before the selling dealer purchased it earlier in 2020.  Having traveled approximately 41k kilometers (25,500 miles) from new, this rare and highly collectible 190E is now being offered by its seller in Florida, accompanied by original books, tools, service records, a spare wheel, and a clean title. 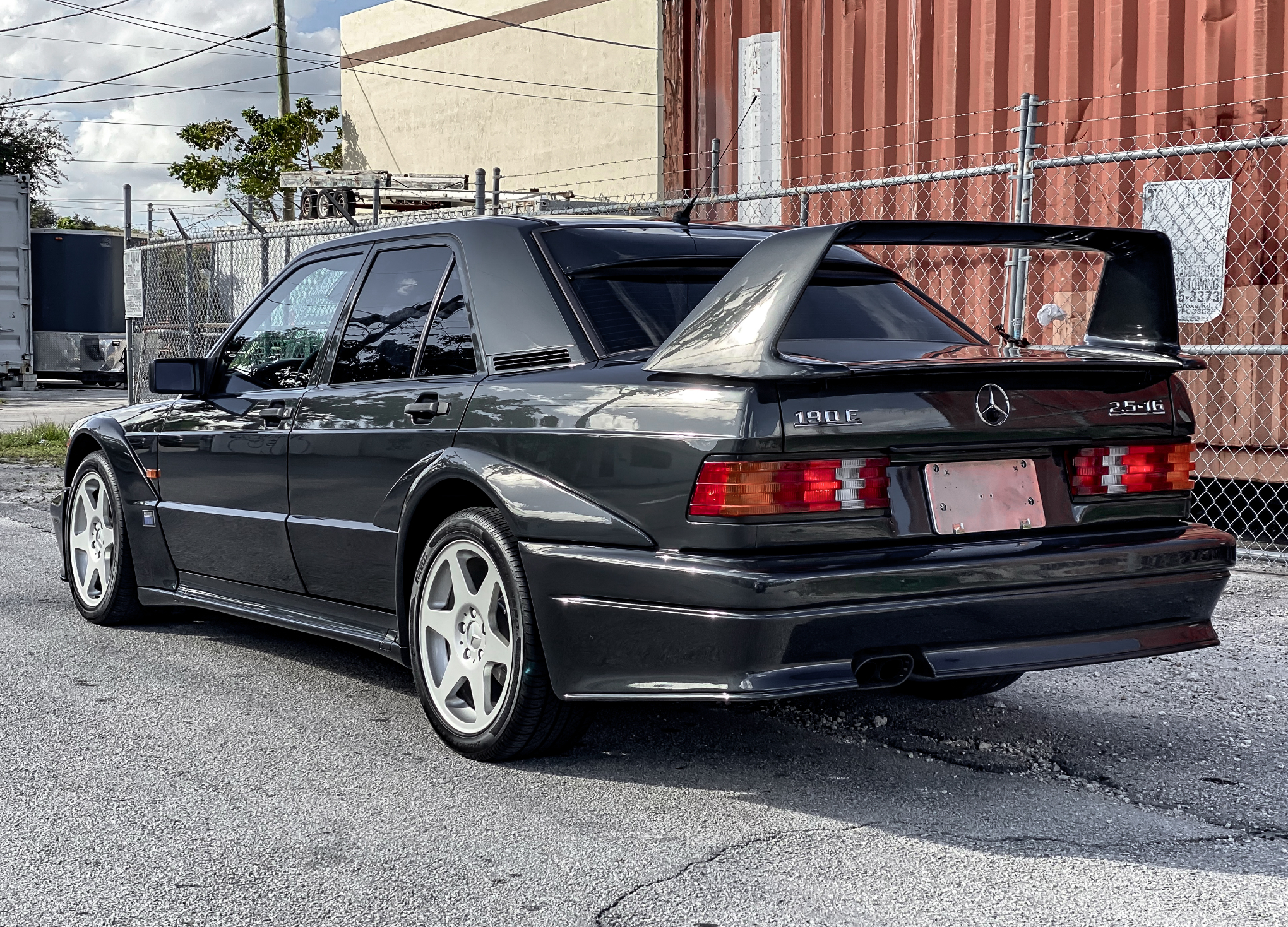 This Evolution II is finished in Blue-Black Metallic, the signature color that was configured for 500 out of the 502 examples built.  The paint is said to be in remarkable condition except for a few areas of discoloration as depicted in the photo gallery.  A Ceramic Pro treatment was applied over the exterior under the current ownership and the paint is reported to be original (meter readings are provided in the photo gallery).  Perhaps the most notable aspect of the Evolution II is its dramatic aerodynamic body styling, which was specially designed by Dr. Richard Eppler of the University of Stuttgart.  Compared with the Evolution I, this body features larger fender flares, a more prominent front splitter, a rear window spoiler, and a larger adjustable rear wing.  This example also retains its factory 17” alloy wheels that come dressed in Pirelli P-Zero Nero all-season tires. 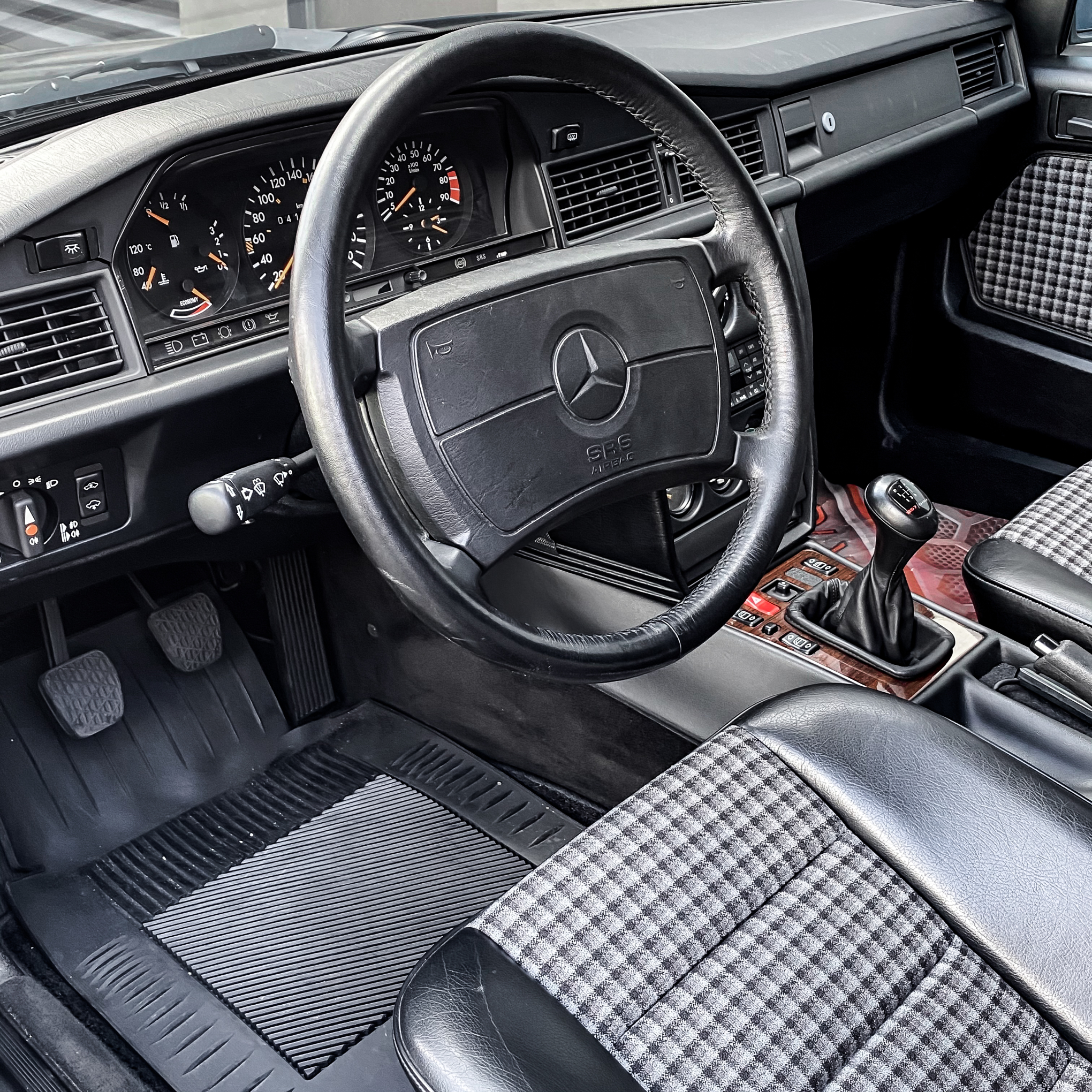 Inside, this 190E highlights a black leather interior with rare pepita cloth upholstery and an airbag steering wheel.  Other features include Zebrawood trim on the gearshift surround, power-operated Recaro seats, air conditioning, a sunroof, and a shift knob with a badge denoting this as the 357th example built.  The cabin is said to be in great original condition with only minor wear on the driver’s seat bolster and shift knob. 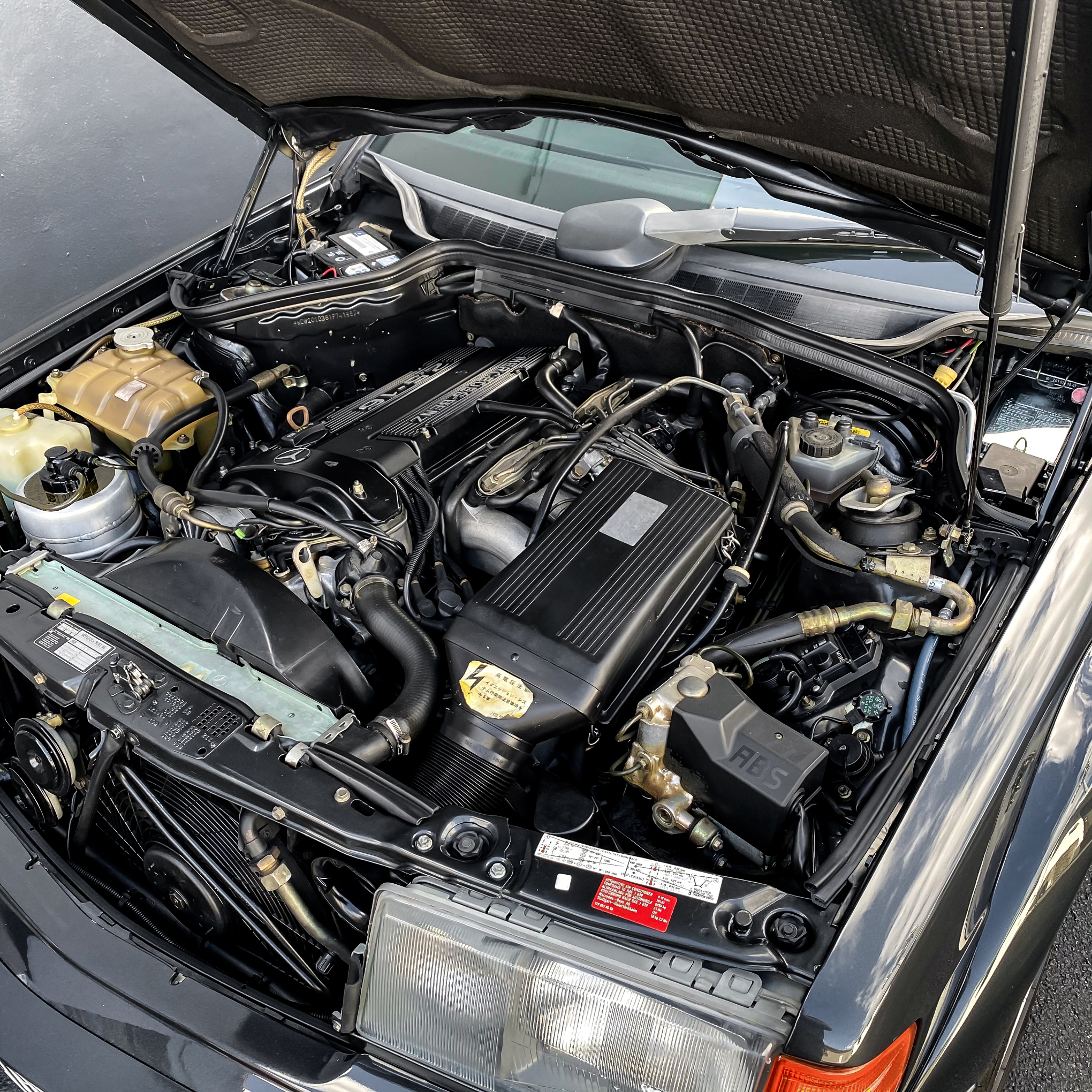 The Evo II model utilized the same Cosworth 2.5 L 16-valve inline-4 short-stroke engine as the original 190E Evolution, but with the AMG PowerPack adding revised tuning, an improved intake and exhaust, a large throttle body, and upgraded camshafts.  The resulting output of 232 HP is sent to the rear wheels by way of a Getrag 5-speed manual transmission with a limited-slip differential.  The original Evolution design was further improved upon for the Evo II with an even lower adjustable suspension setup and more powerful Brembo 4-piston brake calipers.  Service records are included showing routine maintenance by its owners in Japan and Canada, and the seller reports that an oil and filter service was carried out within the last year, with no more than 100 miles driven during their ownership. 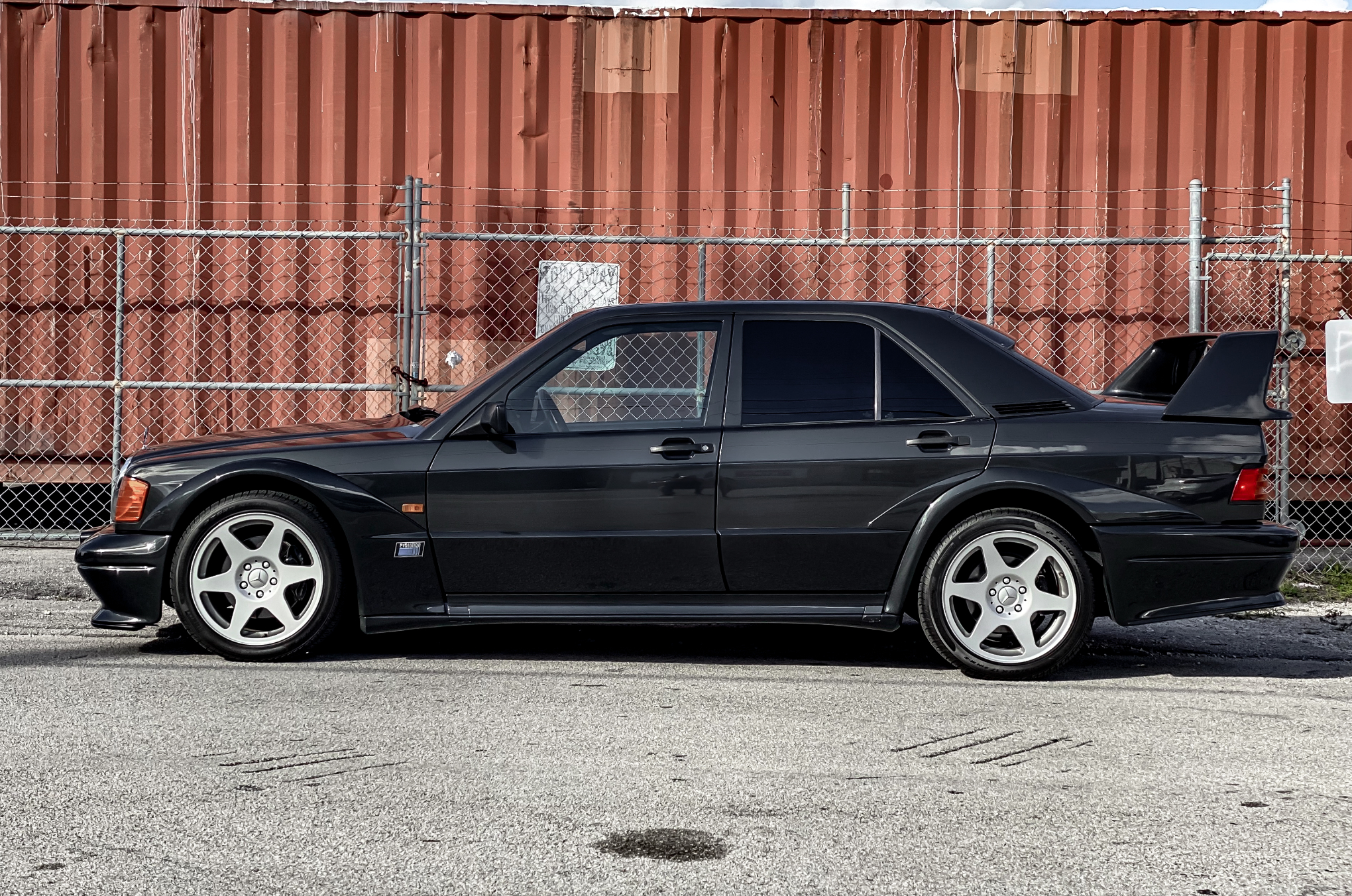 This sale will include a set of 2 keys, a red leather bag containing original books and manuals (printed in Japanese), service records, import documents, a spare wheel, and a clean title.  A true DTM icon, this coveted 190E Evolution II presents an incredibly special opportunity for any European car collector.