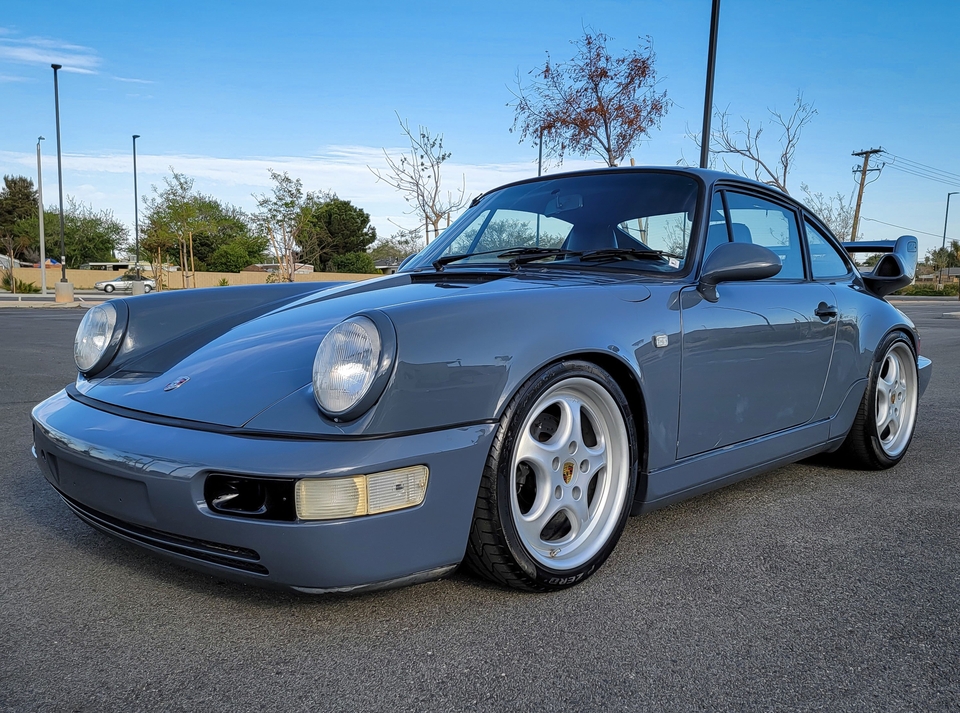 Now up for auction is this custom turbocharged 1990 Porsche 964 Carrera 2 finished in Graphite Blue Metallic over a black interior.  Purchased as a stock example by the seller in 2000, this 964 was enjoyed for many years before it was brought to Protomotive to undergo a custom 3.6 turbo engine build including GT2 cams, an upgraded fuel system, TiAL wastegate, and much more.  The car has also been equipped with an upgraded 14-way adjustable JIC coilover suspension, 4-piston brakes all around, 18” Gemballa wheels, and a genuine GT2 rear spoiler.  With approximately 10k miles driven on the rebuilt engine and 154k miles total on the chassis, this one-of-a-kind narrow body 964 Carrera 2 turbo is now being offered for auction by its seller out of California. 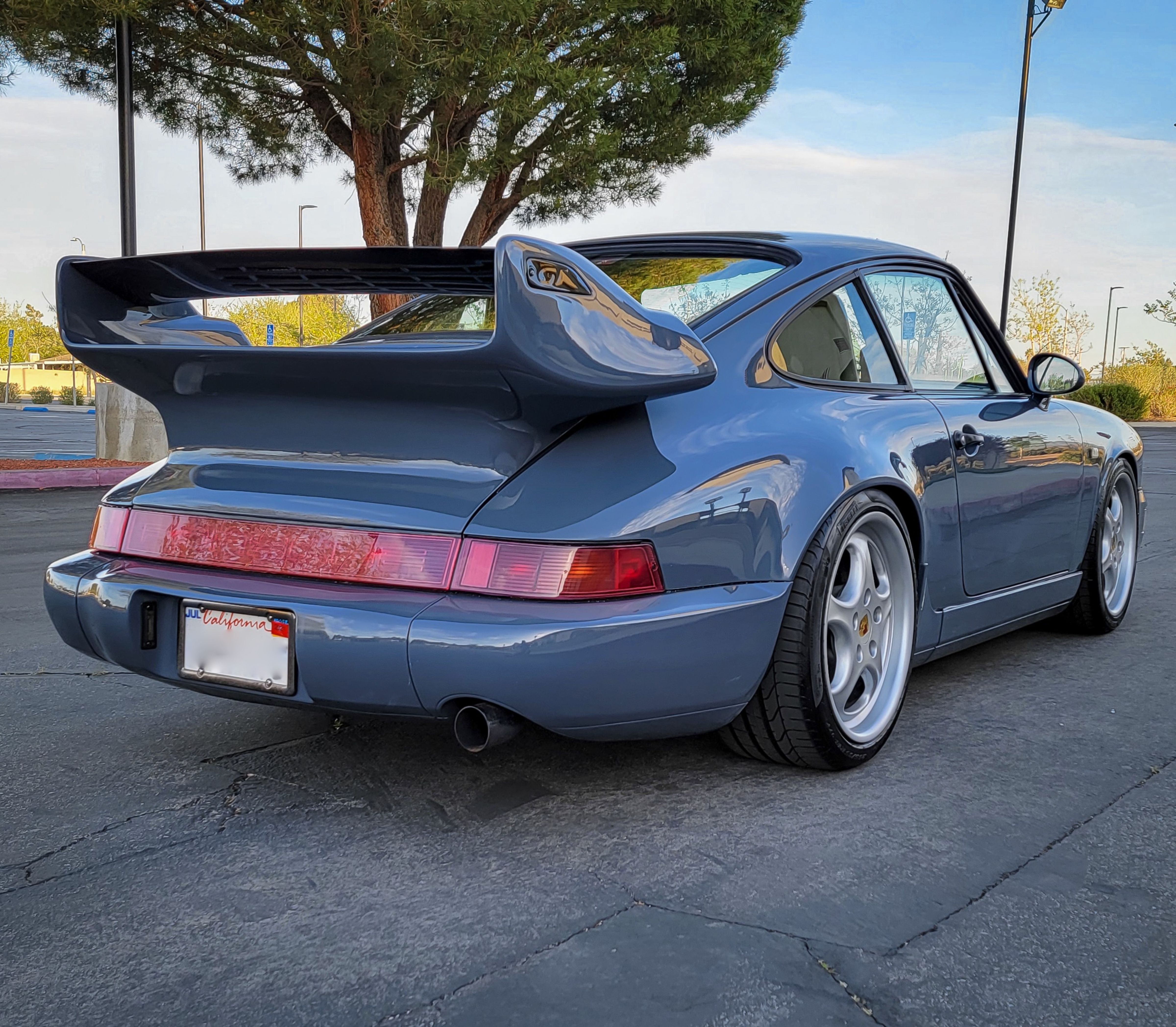 Recently within the last 300 miles, this 964 underwent a complete glass-out respray in the sought-after Porsche color of Graphite Blue Metallic.  The original color of the car is noted to have been Black, and the new paint is said to remain in excellent condition.  The car was refinished following an incident shown on CARFAX, and the seller assures that the damage was limited to the front bumper cover only with no structural damage.  Styling modifications include European H4 headlights with LED bulbs, Euro side markers, and a genuine GT2 rear spoiler with a carbon fiber wing.  This 964 rides on a brand new set of 18” Gemballa wheels dressed in Pirelli P Zero tires. 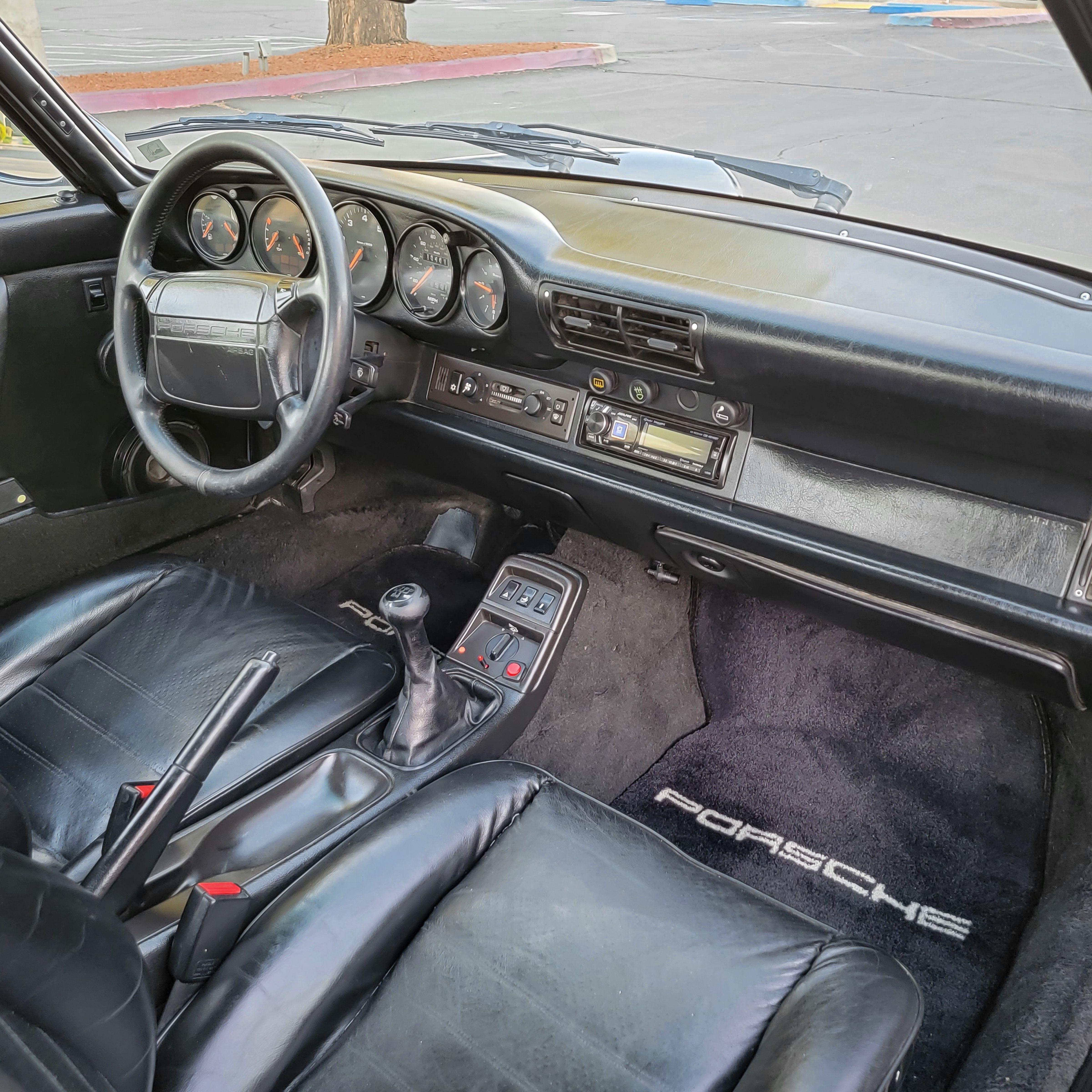 The black interior has been fitted with a custom sound system including an Alpine head unit, Boston Acoustics front speakers, dual subwoofers, and two JL Audio amplifiers.  A short shift kit has also been installed and the interior is described to be in good condition with all gauges and accessories remaining fully functional. CARFAX shows a mileage discrepancy, although this appears likely to be a clerical error when conflating odometer entries. 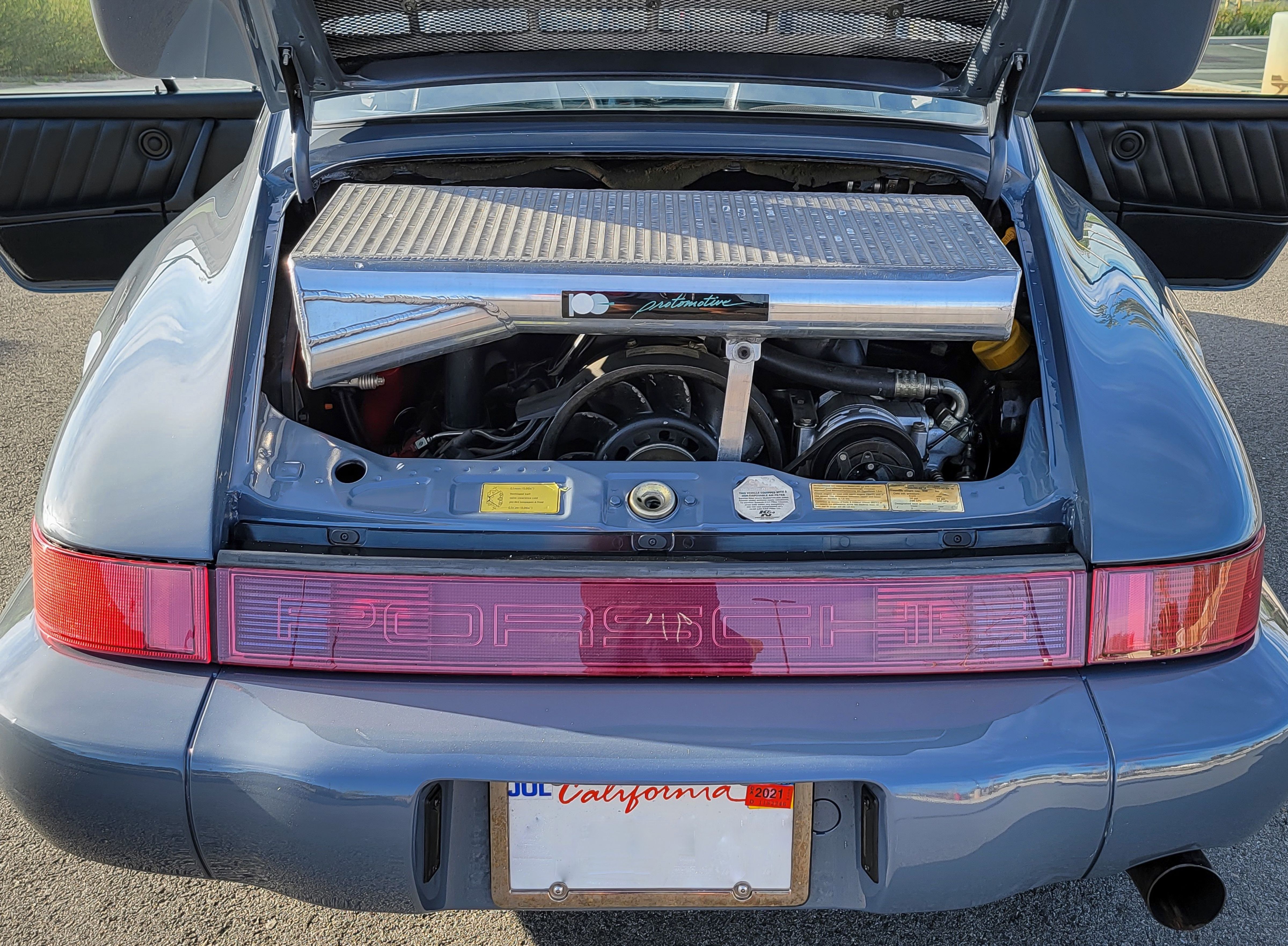 The original 3.6L flat-six engine was brought to Protomotive to undergo a custom rebuild including Turbo pistons and cylinders, GT2 cams from Webcams, a T4 60-trim side-mount turbocharger, an upgraded Bosch 044 fuel pump, larger fuel injectors, larger European intake and exhaust valves, a racing timing chain, 993 mass-airflow update, plastic later-version intake runners, a Protomotive intercooler, TiAL wastegate, blowoff valve, a dual oil filter setup, a lightweight flywheel, and a custom performance tune.  The G50 5-speed manual gearbox was also fitted with a new Turbo-spec pressure plate and clutch.  The handling has been improved with a front strut brace and 14-way adjustable JIC suspension setup, and the stopping power has been upgraded with 4-piston brake calipers all around.  Approximately 10k miles have been driven on the rebuilt engine and a major service is said to have been carried out in the last several months including fluid and filter changes, new spark plugs, and valve adjustments. 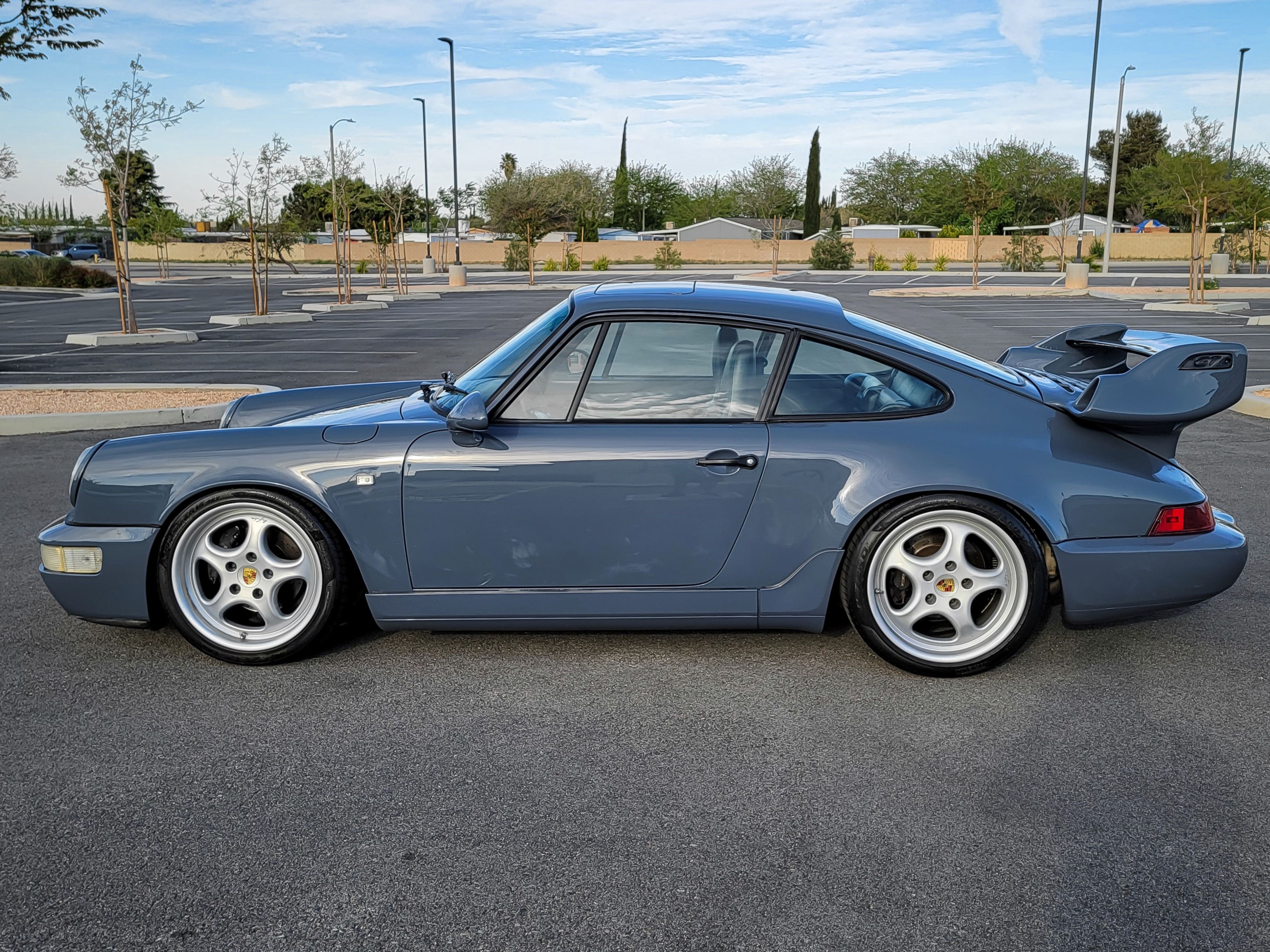 This sale will include a set of two keys, owner’s manuals, the original tools and spare tire, service records, and a clean title.  A truly uncompromising build, this narrow body 964 Carrera 2 turbo is ready to provide miles of excitement for its next owner, do not miss out.