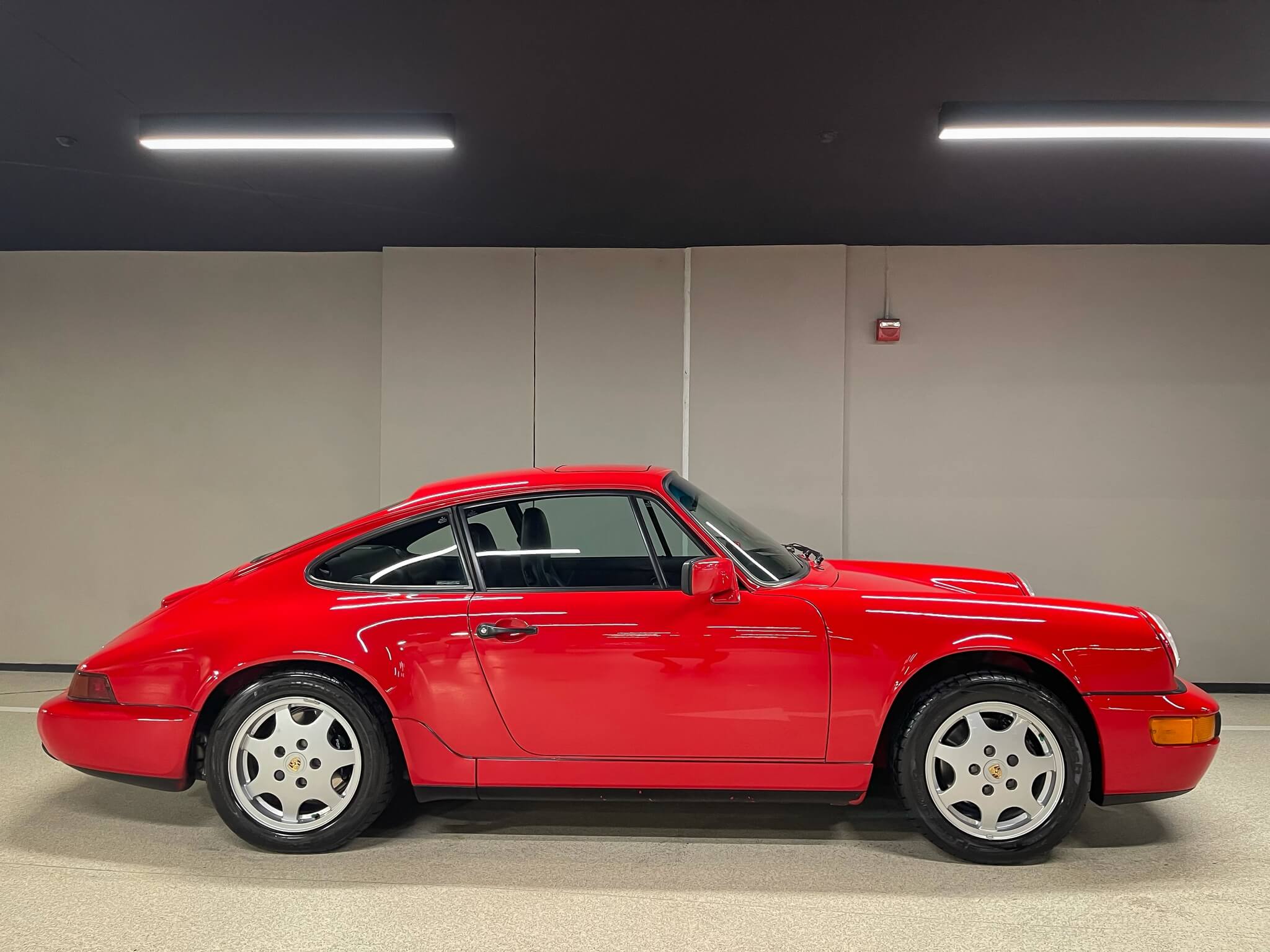 Now up for auction is this 1990 Porsche 964 Carrera 4 Coupe finished in Guards Red over a black interior.  A major evolutionary leap for the Porsche 911, the 964 generation debuted a new 3.6L flat-six engine, revised suspension, improved aerodynamics, and saw the introduction of the first all-wheel-drive Carrera 4 model. This 1990 example is said to have remained under the care of its original owner from new and is accompanied by an extensive collection of service records.  Staying true to its original appearance while showing just over 44k miles on the odometer, this beautifully presented 964 is now being offered for auction by its seller out of Florida. 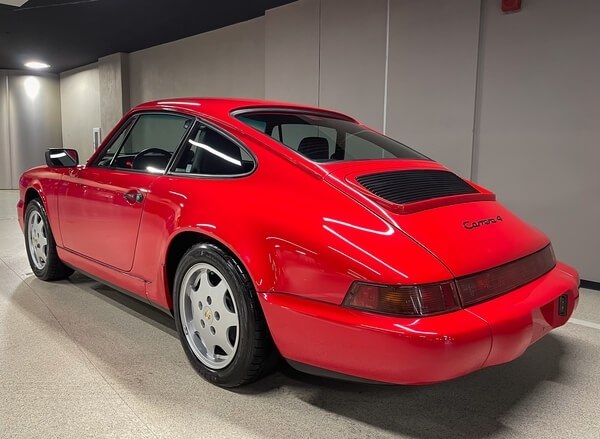 This Carrera 4 comes finished in traditional Guards Red and is distinguished as a 1990 example by its early flag-style mirrors.  Compared to its predecessor, the 964 generation featured a greatly improved aerodynamic design as well as a new automatic electric rear spoiler that provided additional downforce and cooling for the engine compartment. The exterior is described to have been very well maintained throughout the years and the seller reports the passenger-side rear quarter panel to have been previously refinished for cosmetic purposes.  Detailed images are provided in the gallery along with a clean CARFAX report.  This Carrera 4 rides on factory 16” Design 90 wheels with optional color crested center caps and BF Goodrich tires. 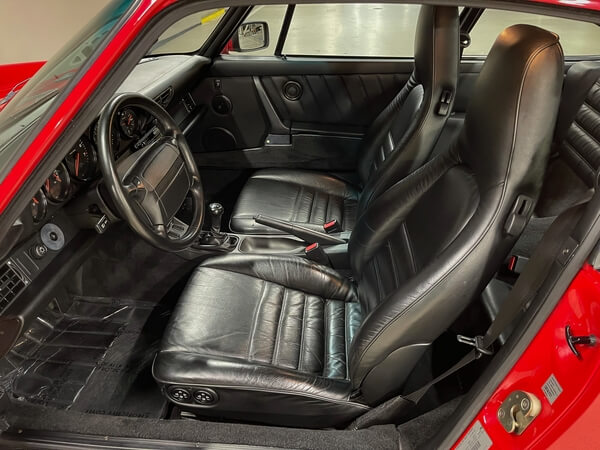 Inside, you will find a black interior with optional power-adjustable seats upholstered in supple leather.  Apart from an aftermarket Denon stereo, the cabin appears to remain highly original.  Standard features include power windows, air conditioning, an electric sunroof, a rear window defogger, and a center binnacle containing switches to manually activate the rear spoiler and lock the differentials when extra traction is needed.  Records show the rear spoiler control unit to have been recently replaced and the seller confirms all gauges and accessories to be working properly. 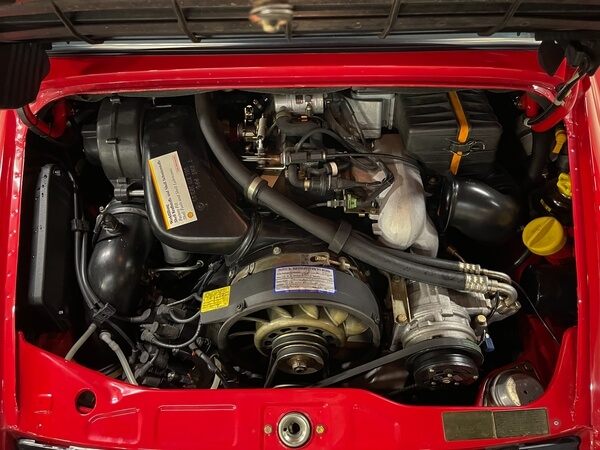 The Porsche 964 was debuted with a new air-cooled 3.6L flat-six engine featuring twin-plug ignition and revised Motronic programming.  As much as 247 HP is sent to all four wheels through a 5-speed G50 manual transmission.  The 964 received a heavily revised coil spring suspension and was also the first Porsche 911 to offer power steering and anti-lock brakes (ABS).  An extensive collection of records accompanying the sale outlines a lifetime of routine maintenance.  The rear brakes were replaced in 2013 at 42,538 miles and a major service was performed in 2017 at 43,595 miles including an overhaul of the ignition system with a rebuilt distributor, new belt, caps, rotors, and spark plugs. More recently in August of 2021, a service and inspection were carried out by Stuttgart Autotech during which time the left-side steering rack boot was replaced and some leaks were identified from the engine covers and differential output seals. Corresponding records are provided in the gallery for reference. 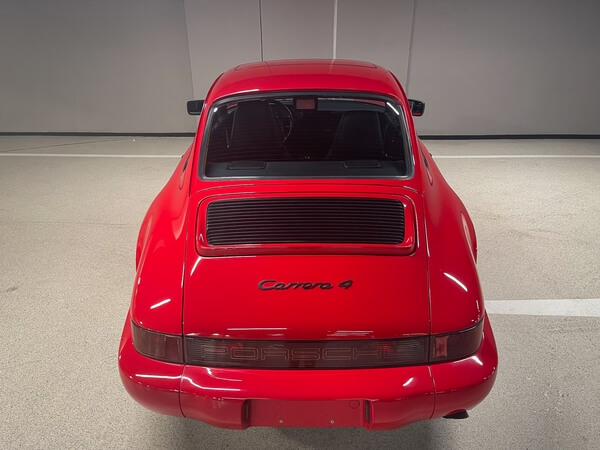 This sale will include a set of keys, a collection of service records, and a a clean title.  As the 964 generation becomes increasingly sought after, well preserved examples such as these have become true collectors items.  Do not miss out on this remarkable one-owner 1990 Carrera 4.