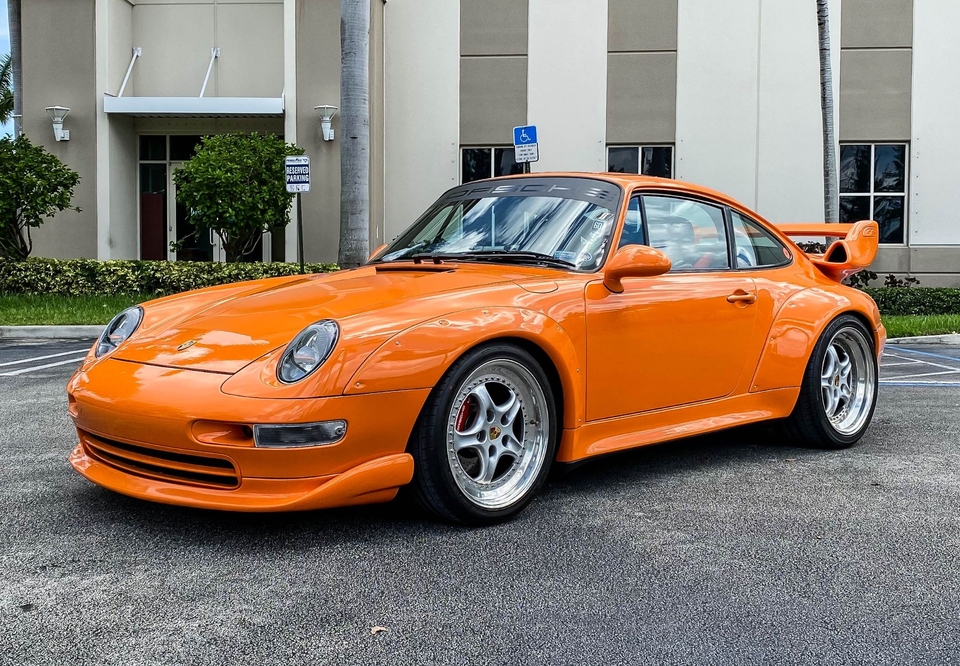 We are pleased to offer this custom-built 1995 Porsche 993 Carrera “GT2 Tribute” finished in Signal Orange over a performance-oriented black leather interior.  Initially developed for racing homologation purposes, the original GT2 is considered by many collectors and enthusiasts to be the pinnacle of the 993 series.  Starting out as a standard 993 Carrera, this 1995 example underwent a full GT2-inspired conversion in 2016 which included a full body kit and some noteworthy performance upgrades.  Completed after a year’s worth of work, this GT2 Tribute was well received as it earned several awards at PCA concours events.  Said to have been properly maintained after the completion of the build with approximately 10k miles added since (approximately 163k total miles), this beautifully executed GT2 Tribute is ready to be enjoyed by a new owner. 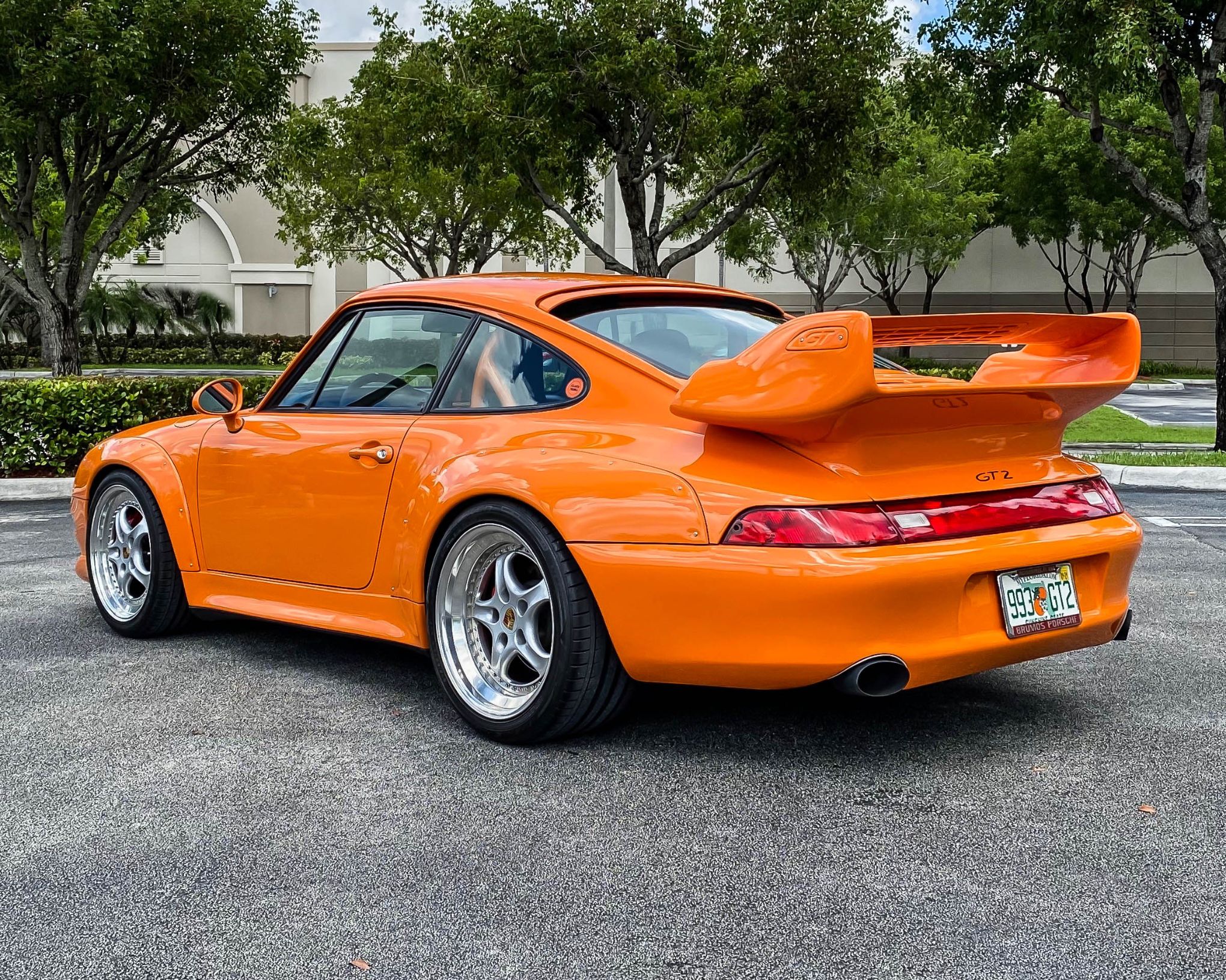 In 2016 this 993 was treated to a professional glass-out respray in the eye-catching Porsche color of Signal Orange.  The full fiberglass GT2-style body kit was painted separately from the rest of the car prior to installation.  The paint is said to be in excellent condition (detailed images are provided in the photo gallery).  Some rear-end damage was reported on Carfax in 2002, although the seller confirms that there are no persisting issues.  During the build, new front and rear HID lights were installed along with new body seals.  The GT2’s styling is notable for its signature bolt-on fenders, front spoiler and fixed rear wing.  This Tribute rides on aftermarket 18” Speedline-style 3-piece wheels which come dressed in Falken tires from 2015. 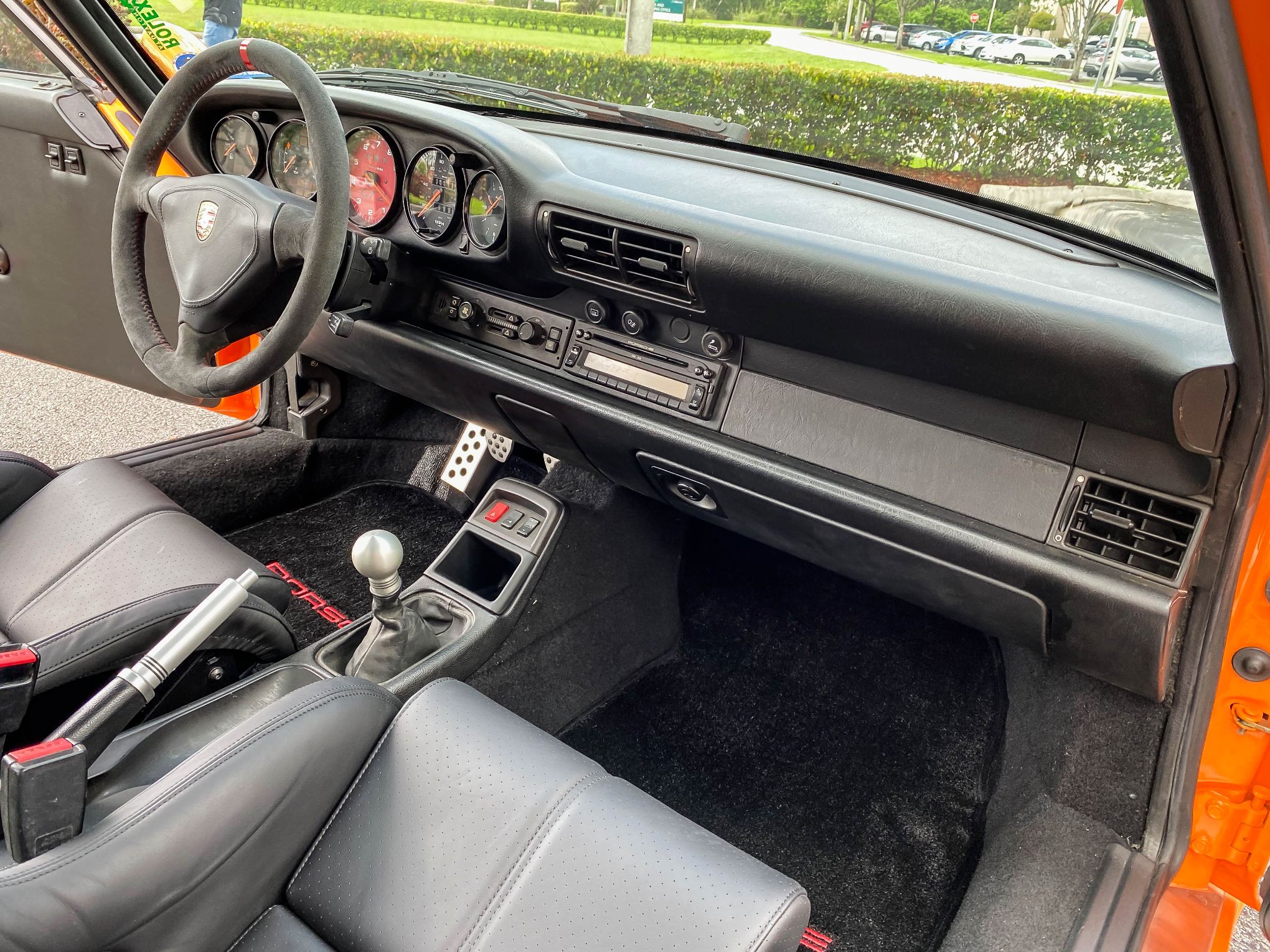 Inside, the cabin has been outfitted with performance-oriented equipment including leather Recaro racing seats, a rear seat delete, RS style door cards, an aluminum pedal set and a Signal Orange painted roll bar.  Other modifications include an aluminum shift knob and brake lever, red seatbelts, a custom 3-spoke Alcantara steering wheel and a red central tachometer which reads “GT2”.  The seller also notes that the odometer has been replaced in April of 2019.  The interior is stated to be in fantastic shape with all gauges and accessories remaining fully functional. 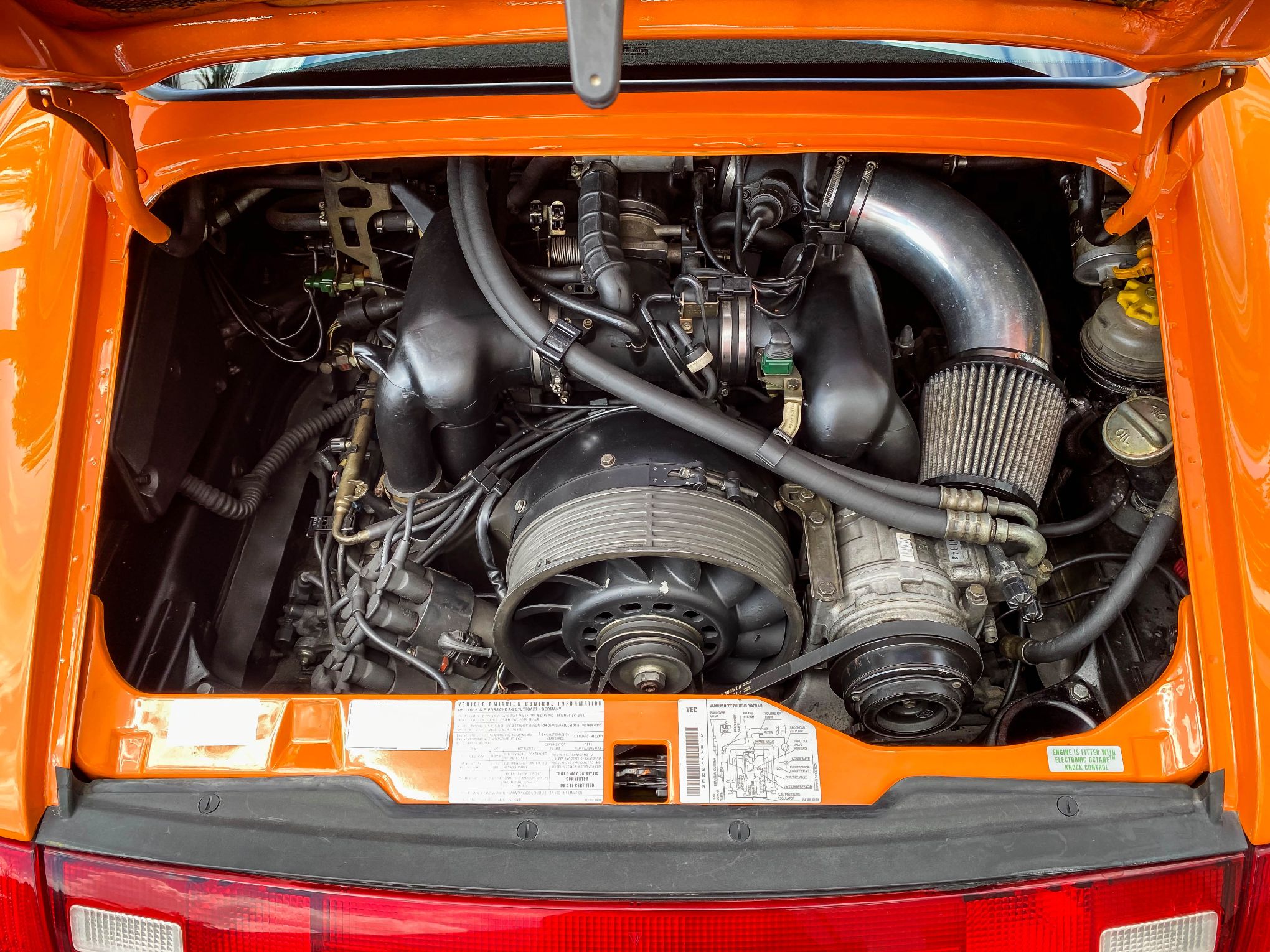 This 993 retains its original air-cooled 3.6 L flat-six engine which is rated at 272 HP stock.  Power is transferred to the rear wheels by way of a number’s matching 6-speed manual transmission making for a 0-60 time of approximately 5.4 seconds.  This GT2 Tribute has been upgraded with Wevo RS engine mounts, an RS cold air intake and Fabspeed stainless steel headers with a custom exhaust system.  Bilstein HD struts have also been equipped and paired with new H&R lowering springs.  These modifications not only improve overall performance but add to the raw and sensory driving experience.  A full service was performed upon the seller’s purchase in 2016 which included a compression test, new belts, spark plugs, fluids and filters.  Having been driven approximately 10k since this time, this Tribute remains up to date on all due service with an oil and filter change carried out within the last 1k miles.  The odometer was replaced and reset following the completion of the build, however the seller estimates that this car bares approximately 163k miles.

The sale of this remarkable 993 will include one master key, service records and an air-pump.  This high-quality Tribute offers a unique opportunity for any Porsche enthusiast who has always dreamed of owning the legendary 993 GT2.