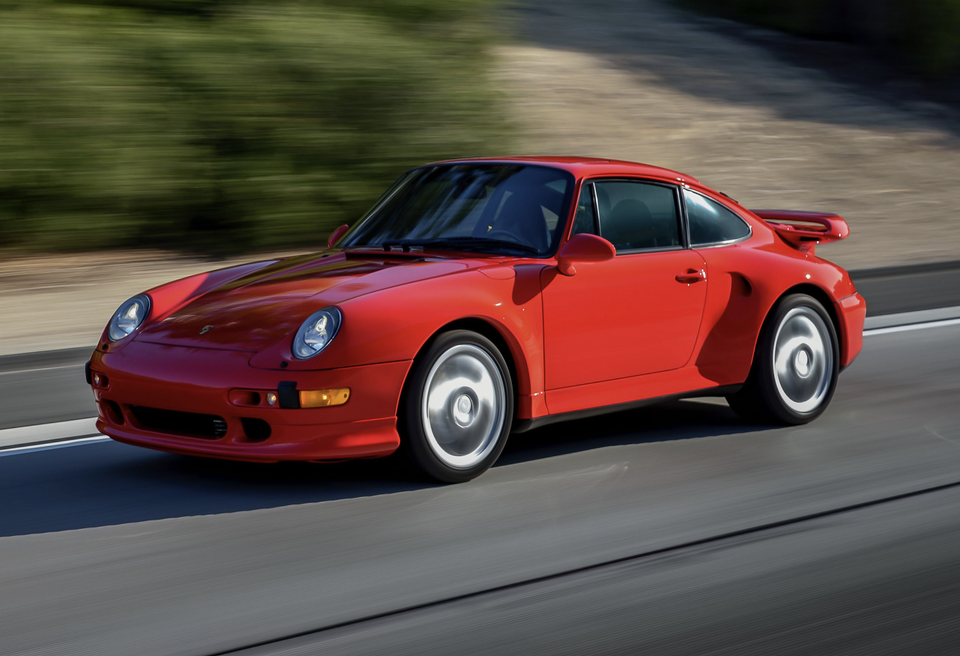 It is our pleasure to present this rare 1997 Porsche 993 Turbo S finished in Guards Red over a black leather interior with factory Racing Style Sport Seats.  The final evolution of the air-cooled 911 Turbo, the 993 Turbo S was offered through Porsche’s Exclusive Department between 1997-1998 with 345 examples built in total, of which only 183 were designated for the U.S. market.  The fastest and most luxurious road-going model Porsche had ever produced, the Turbo S differs from its standard counterpart with a unique factory Aerokit, lowered and reinforced suspension, a special performance kit providing increased power, and a beautifully appointed leather-wrapped interior with carbon fiber trim.  This particular example, chassis 375758, was originally delivered in Florida before moving with the second owner to Illinois where it received its 6k-mile recommended service in 2004.  It would then spend time with its next owners in Ohio, Colorado, and California where it was recently purchased by the seller from a major Porsche collection.  Accompanied by owner’s manuals, tools, a Porsche Certificate of Authenticity, and a limited-edition set of prints by automotive photographer Larry Chen, this exceptional 1997 Turbo S is now being offered for auction by its seller out of Florida while showing just under 12k miles on the odometer. 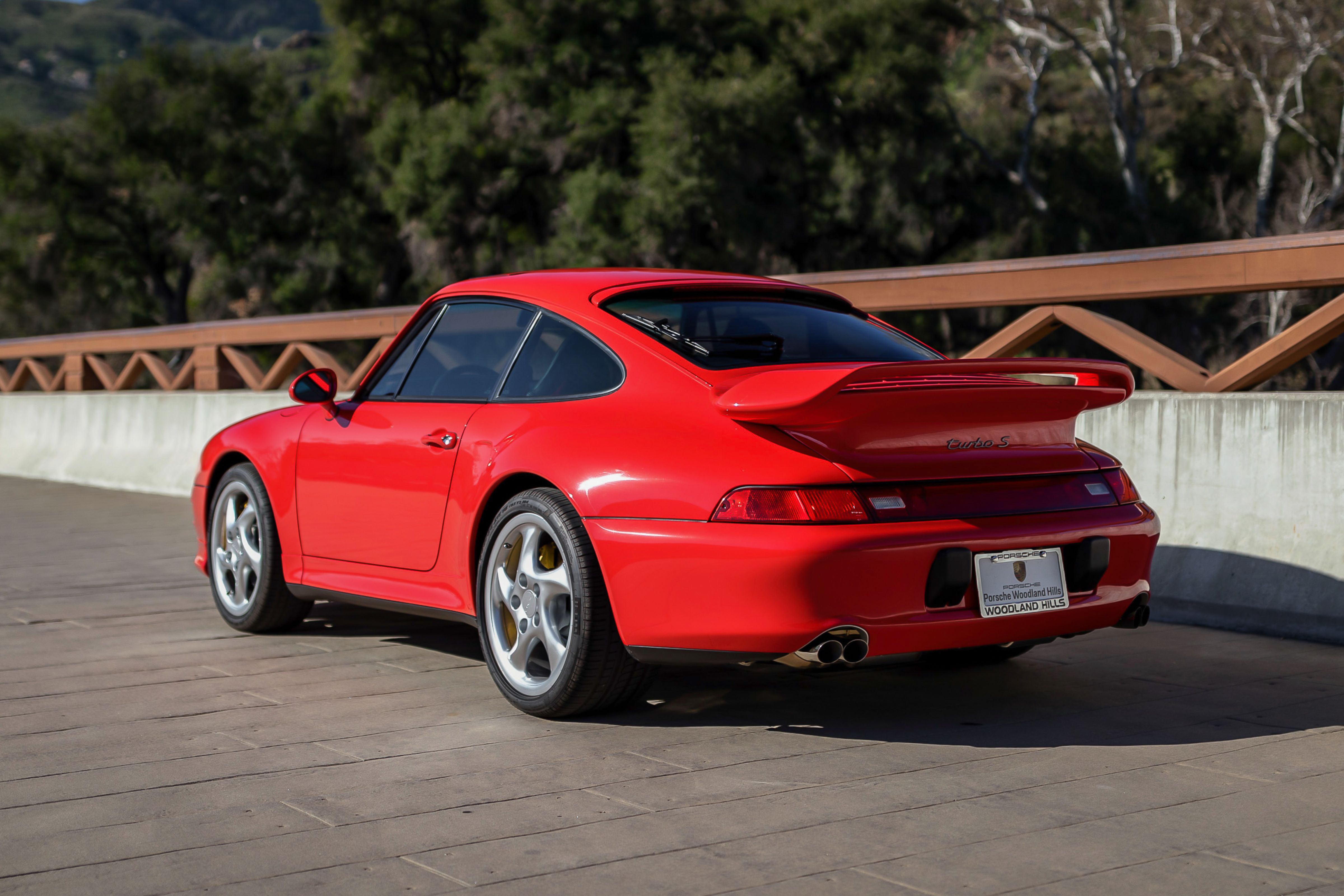 This Turbo S is finished in the traditional shade of Guards Red.  A comprehensive multi-day professional detail is being carried out in preparation for sale and the seller notes the undertray to have been recently removed for an undercarriage dry-ice treatment which left the original cosmoline coating fully intact.  According to the seller, the hood and front fenders were recently repaired by the specialists at European Collectibles in California.  Detailed images including an in-depth photoshoot by Larry Chen is provided in the gallery along with a clean CARFAX report.  Distinguishing itself from a standard Turbo model, the Turbo S comes with the Exclusive Aerokit II including modified front and rear spoilers.  Additional cooling ducts for the brakes were also integrated into the front bumper along with 959-style air intakes added to both rear quarter panels.  Other unique details include titanium rear “Turbo S” script, quad tailpipes, and Speed Yellow painted brake calipers.  The 18” hollow-spoke wheels also feature special  “Turbo S” script center caps. 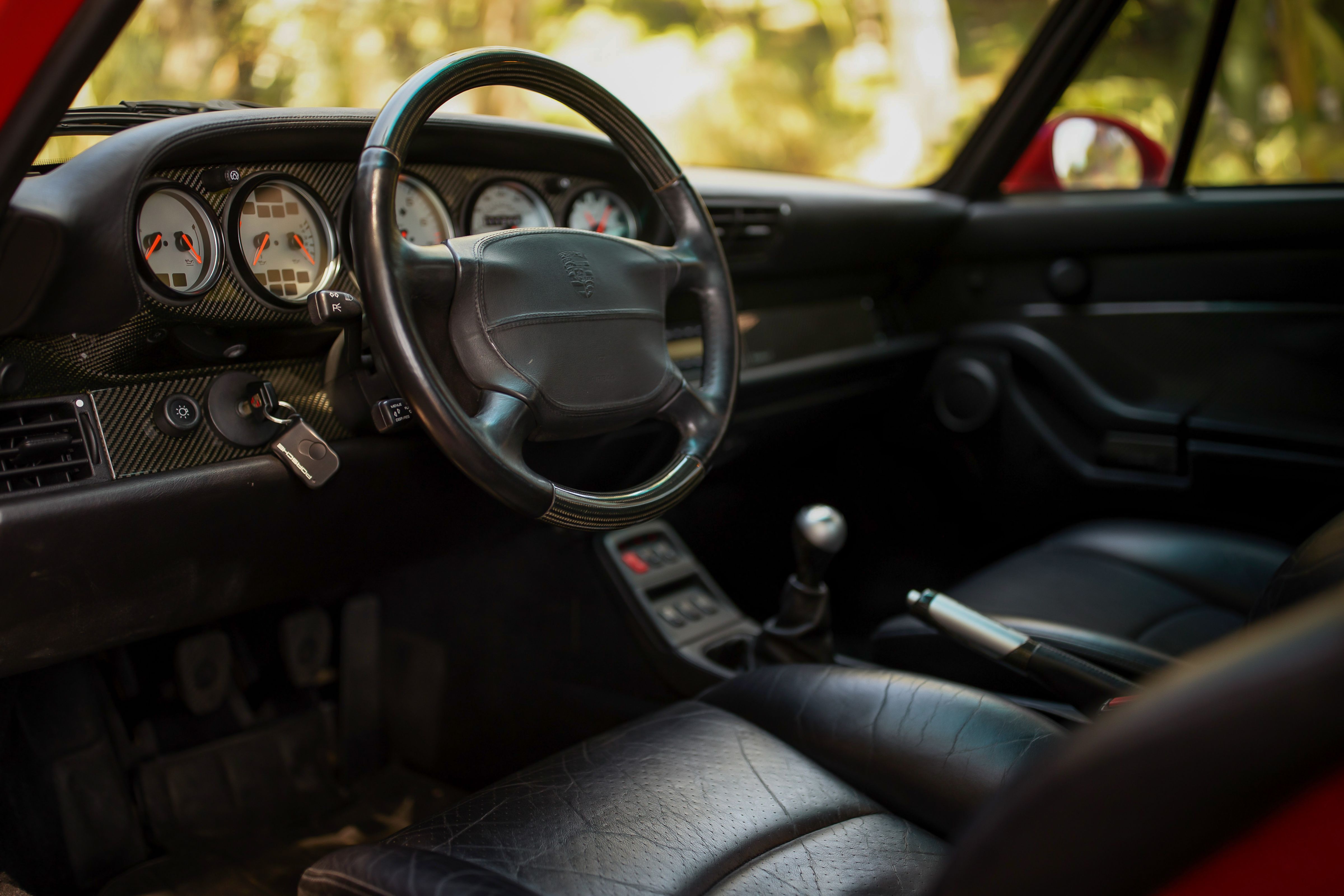 Porsche’s Exclusive Department appointed the Turbo S with a special leather-covered interior including carbon fiber trim throughout the cabin.  Other interior features include an aluminum shifter and handbrake lever, silver-painted instrument dials, embroidered “Turbo S” script on the rear panel, and yellow seatbelts.  This example was also equipped with a steering wheel in leather and carbon fiber, the Digital Sound Package, and painted hardback Racing Style Sport Seats with Porsche crested headrests.  Some minor signs of wear are noted on the driver’s seat bolster and the seller confirms all gauges and accessories to remain fully functional. 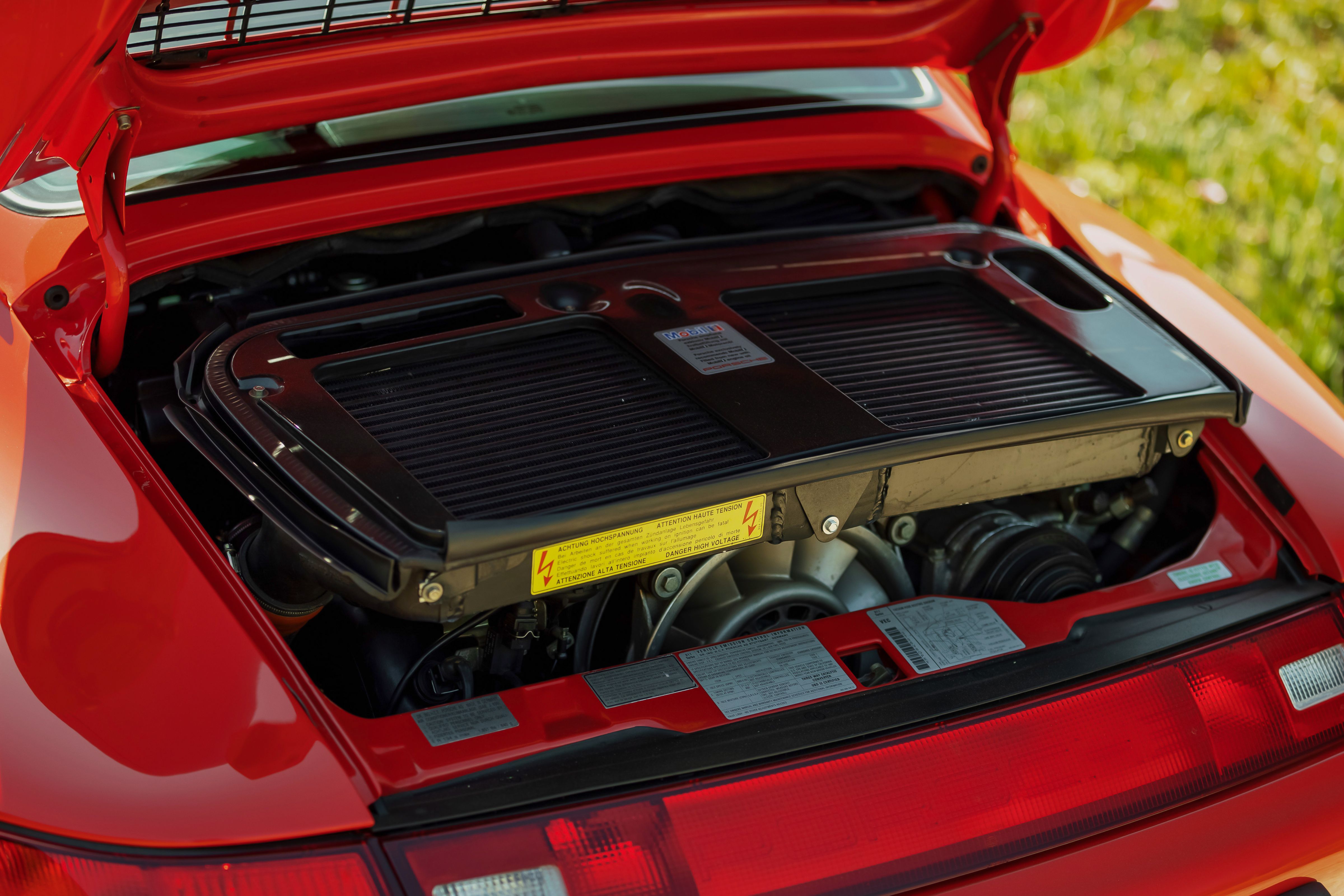 The air-cooled 3.6L twin-turbocharged flat-six engine in the Turbo S received a special performance kit from the Works I Exclusive Department including a pair of larger K24 turbos, a modified engine management system, and an additional oil cooler.  For U.S. specification cars, this upgrade provided an output of up to 430 HP which is sent to all four wheels through a 6-speed manual transmission.  The suspension towers were also factory strengthened to withstand the forces generated by the lowered sport suspension.  Some service records are provided for reference in the photo gallery and the seller reports the car to have been completely gone through and inspected by Porsche of Woodland Hills earlier in February of 2021.  There are no outstanding maintenance items reported at this time. 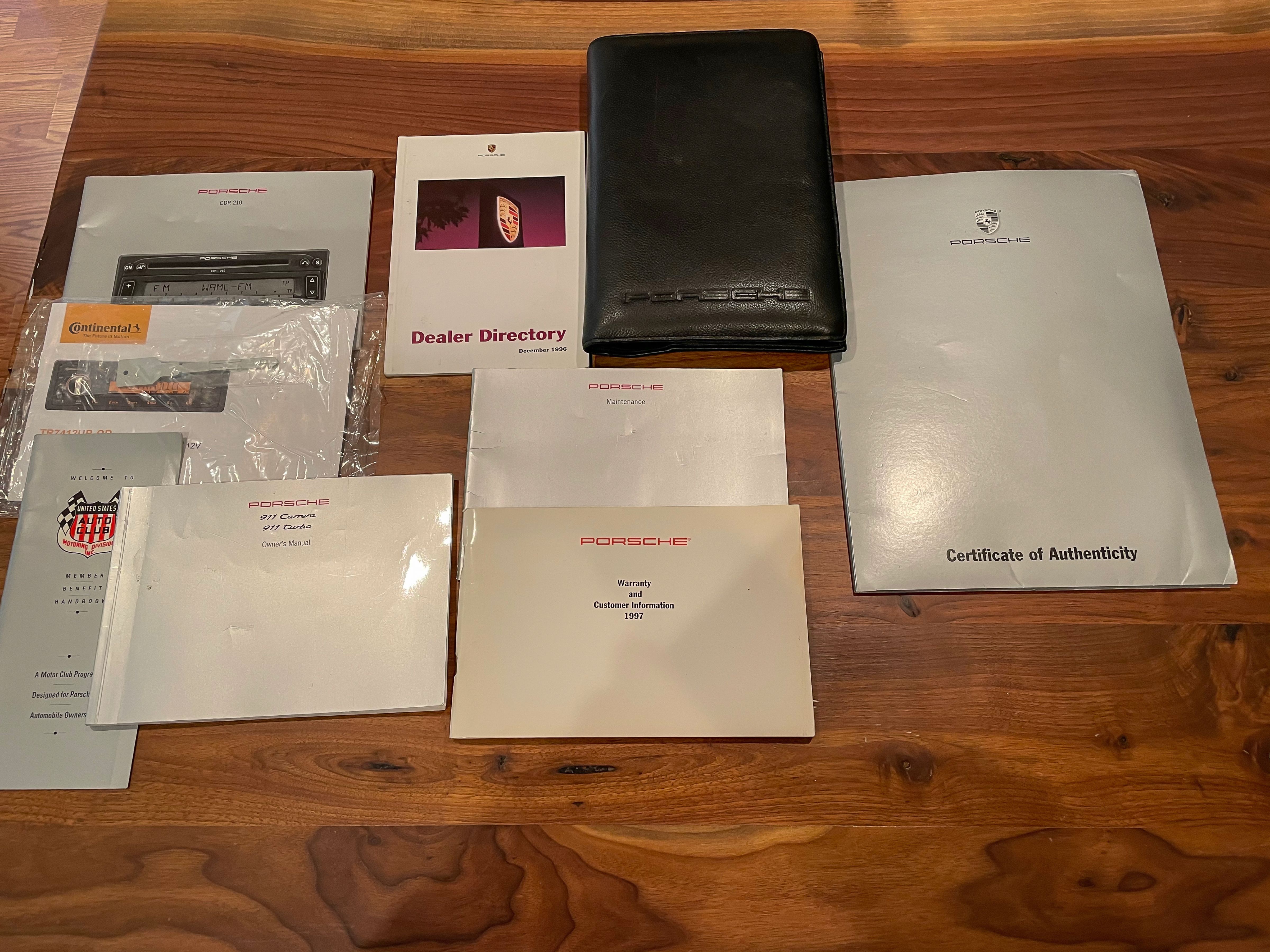 This sale will include a set of two keys, original owner’s manuals, a toolkit, air compressor, spare tire, Porsche Certificate of Authenticity, and an assortment of service records.  Also included is a limited-edition set of prints (1/3) by Larry Chen consisting of three individual photos making up a full image of the car.  The final air-cooled 911 Turbo and one of the rarest Porsche’s ever produced, this 993 Turbo S makes a perfect complement to any world-class car collection 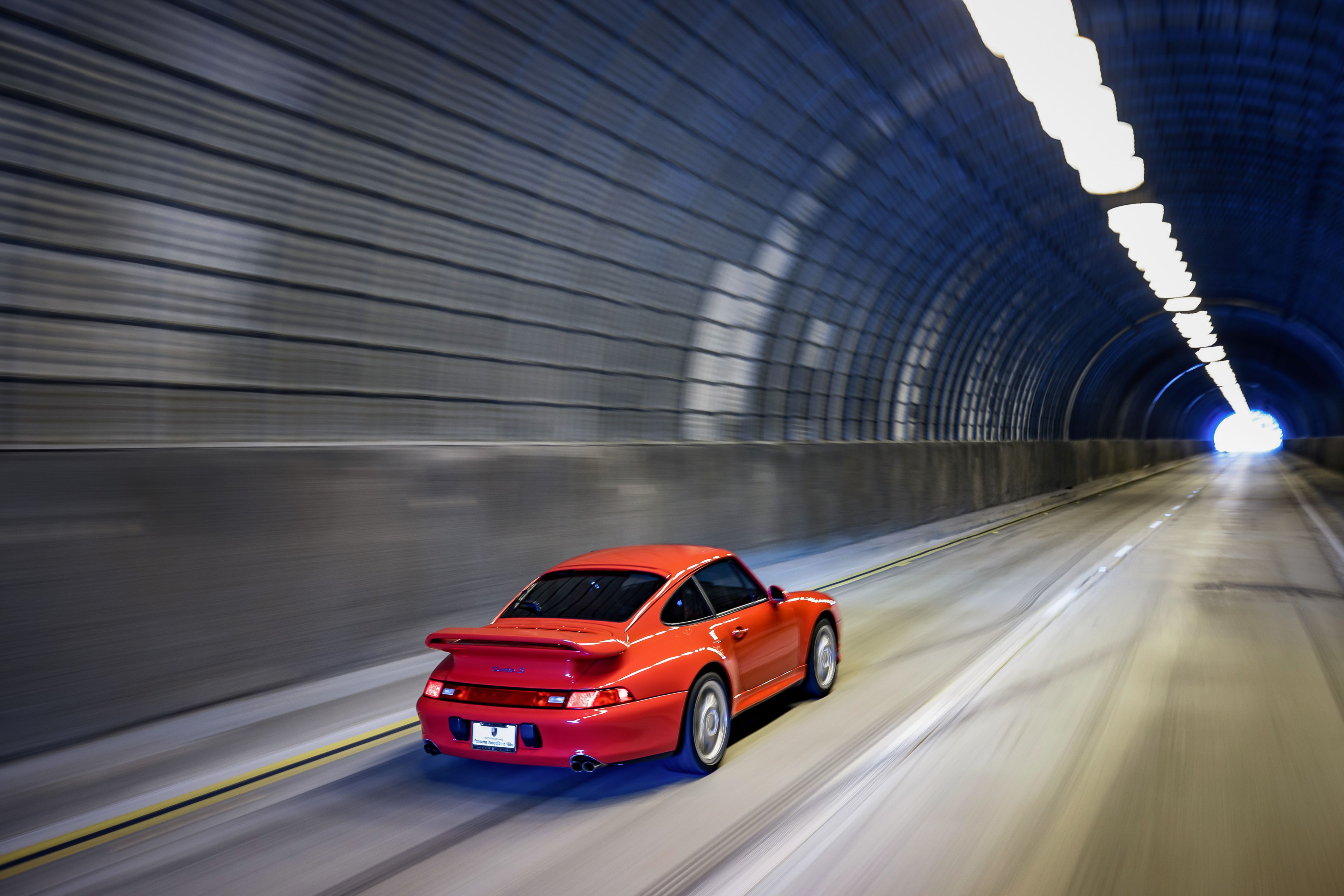 *For those attending the PCA Werks Reunion at Amelia Island, please be sure to visit us at the PCARMARKET booth and see this beautiful Turbo S in person.